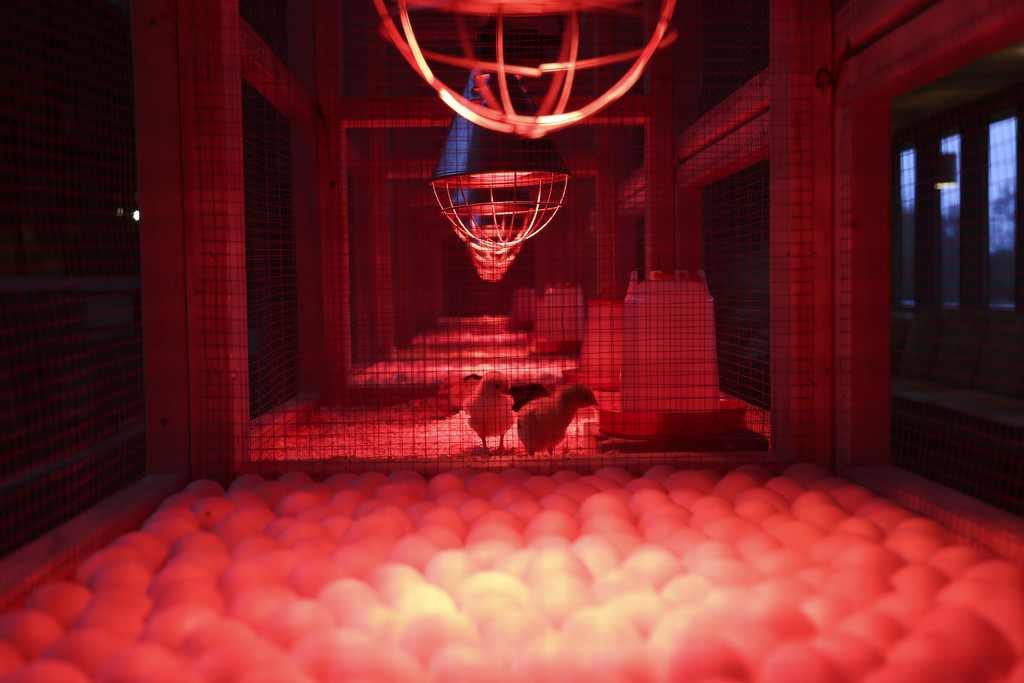 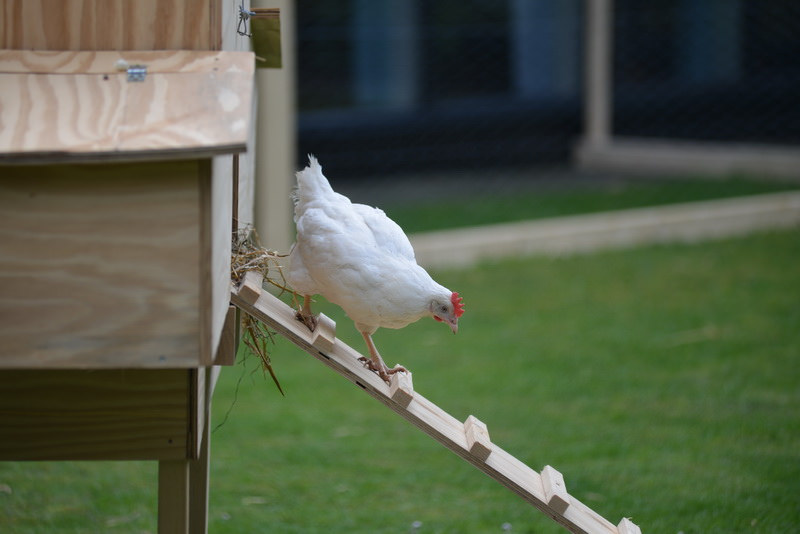 Artist Koen Vanmechelen believes that we like to inject our own culture into other living beings. And in particular chickens.

Take the French chicken Poulet de Bresse, for example. It is white, with a red comb and blue feet: the colours of the flag of France! The Chinese raise a kind of fluffy chicken that is covered in silky plumage. As for the Americans, they obviously prefer their chicken to be as massive as possible.

Since 1999, the Belgian artist has been patiently interbreeding national varieties of the domesticated bird for his Cosmopolitan Chicken Project. His first hybrid, the Mechelse Bresse, was a cross between the Belgian Mechelse Koekoek and the French Poulet de Bresse. Each successive generation of the Cosmopolitan Chicken is crossbred with a chicken breed from another country. And each of them is a work of art, a feathery advocate for diversity and an ongoing research project: Vanmechelen hopes to eventually create a Cosmopolitan Chicken, a bird that would carry the genes of all the chicken breeds on this planet. 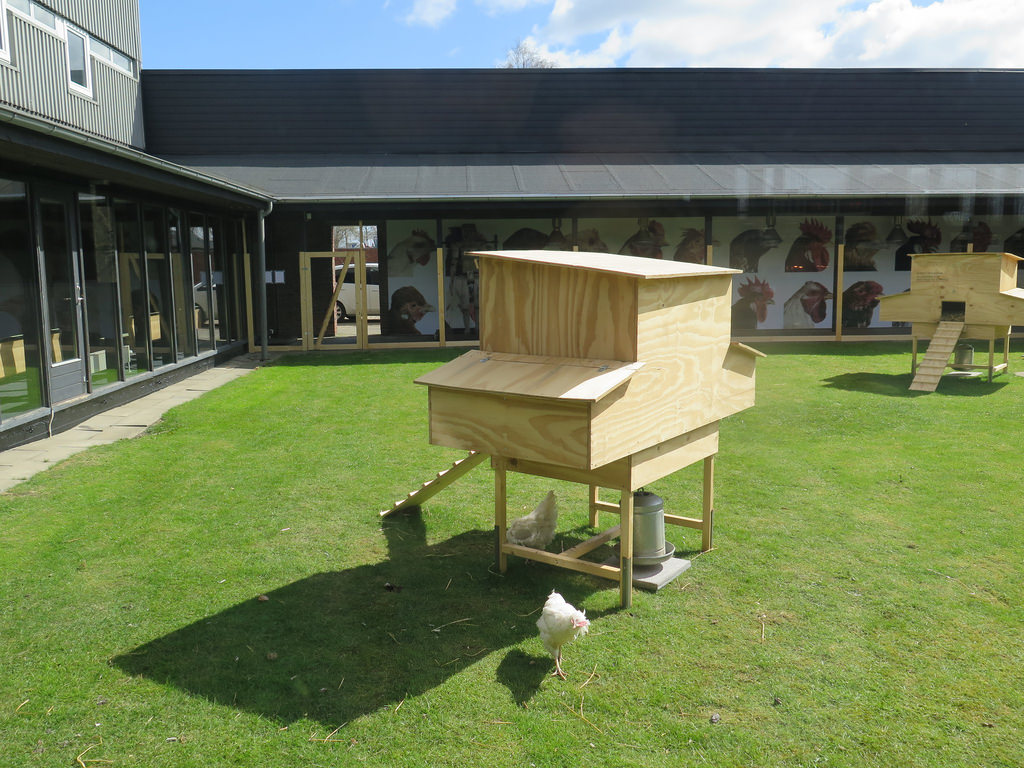 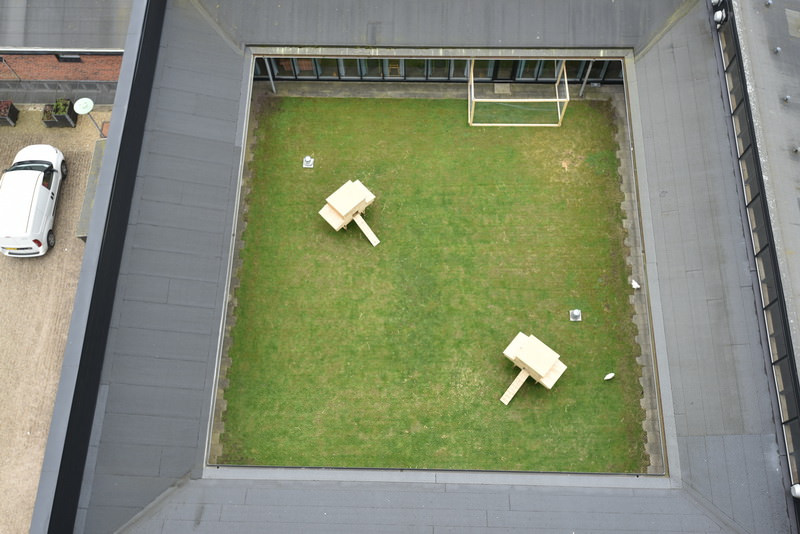 The Cosmopolitan Chicken Project has recently reached its 21st generation. This new hybrid is the Mechelse Danish, a crossing between the Mechelse Wyandotte and the Danish hen. You can discover it at Socle du Monde, the oldest Danish biennale focusing on contemporary art which opened a few days ago in Herning.

This Cosmopolitan Chicken is only one part of the installation. The art biennale also showcases the Planetary Community Chicken, this time a cross between Cosmopolitan roosters and commercial hens. In this case, a local breed called the Danish Bovan Brown.

Working together with scientists to monitor the breeding process and the well-being of the animals, Vanmechelen soon realized that his highly genetically diverse Cosmopolitan Chickens had become more resilient, more adaptable, less susceptible to diseases than their purebred peers and, interestingly, they also exhibit less aggressive behaviour. With this new spin on his artistic investigation, Vanmechelen hopes to bring together the global of the ‘art chickens’ with the local of their commercial peers, and thus the diversity and robustness of the Cosmopolitan Chickens with the productivity of the industrial chicken.

The idea started in Detroit. Vanmechelen was preparing an exhibition at the Wasserman Projects gallery and realized it might be objectionable to raise chickens for purely artistic reasons in a city that is going through so much economic hardship. So, together with Gary Wasserman, he decided to find a way to ‘activate his art in the community’. Contrary to the ‘art’ chickens these planetary chickens are used for consumption, the eggs can indeed be eaten by the local communities. Currently pilot projects of the Planetary Chicken are developed also in Zimbabwe, Detroit and in Genk where Vanmechelen studios and foundation headquarters are based.

“I think of the Planetary Community Chicken as a gift to the different communities to make their own chicken that is suited to their particular environment,” the artist explained in a recent interview with Modern Farmer. 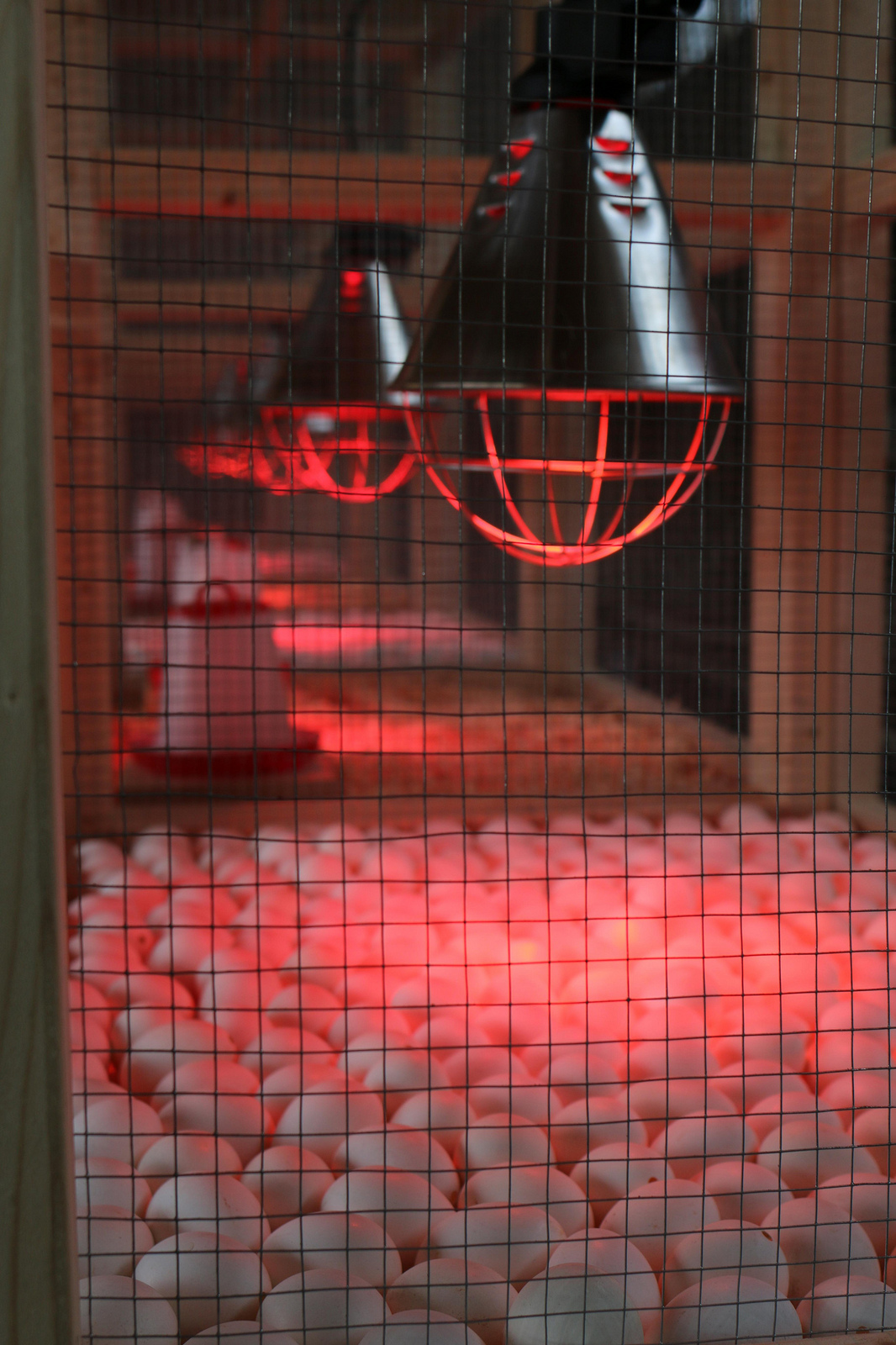 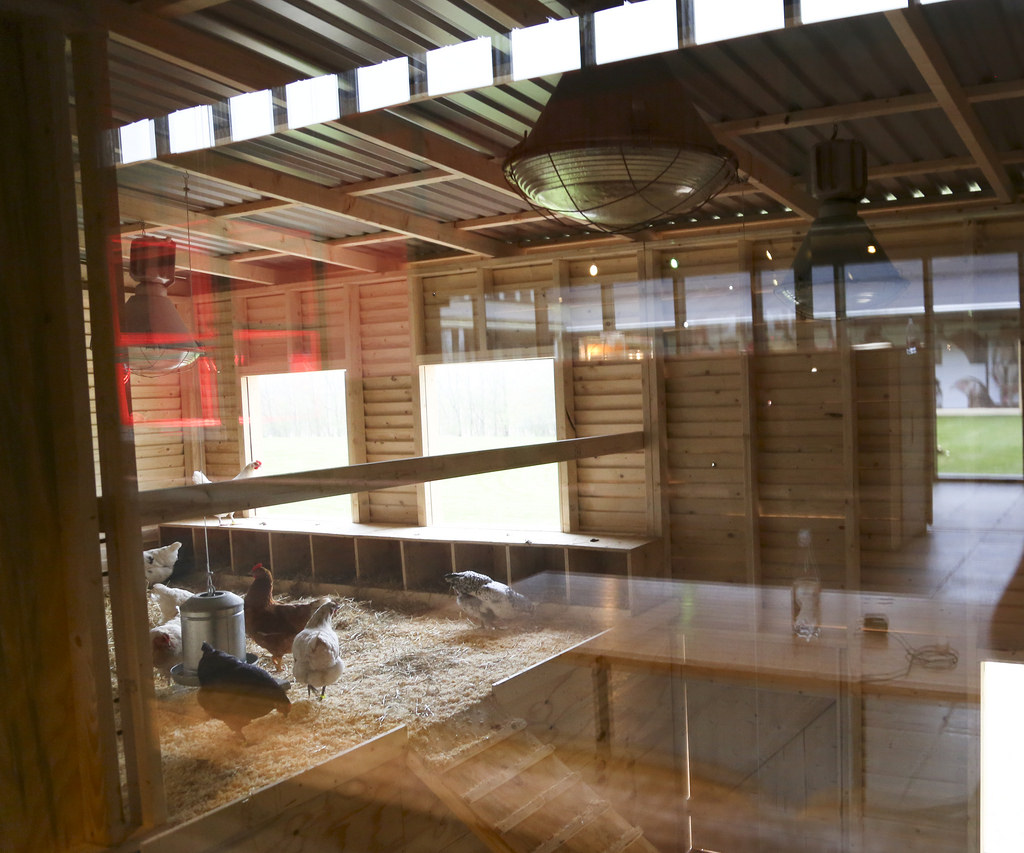 The installation at the Socle du Monde biennale shows the entire breeding process: incubators with the fertilised eggs from the parent chickens, hanging cage for the Planetary Chicken newborns, wooden coop for the Planetary Community Chickens when they grow up, etc. Meanwhile, the parent birds (Mechelse Dansk and Bovan Browns) are roaming in the courtyard. 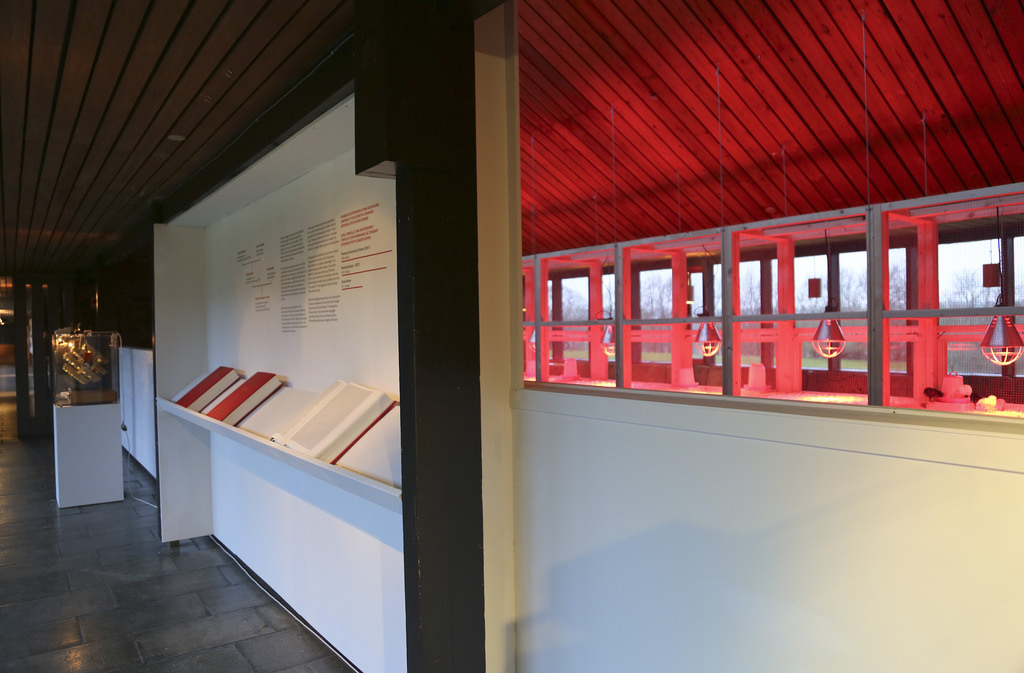 The artists is also showing the Library of Collected Knowledge, a growing collection of books on topics related to his work. The space also displays the Books of Genomes which contains the DNA sequence of the chickens in the courtyard and demonstrates thus that the crossbred chickens are more diverse than the industrial one.

Vanmechelen usually breeds about a hundred of each generation. He keeps some of them on a huge farm in Belgium. The others find a home in various farms across the globe. After the exhibition in Herning, Copenhagen-based organization Beyond Coffee will take care of Vanmechelen’s new Planetary Community Chickens. They will play a role in a circular urban mushroom farm. Organic oyster mushrooms feed on collected coffee grounds. After harvest, the waste material constitutes a protein-rich substrate that is given to mealworms. The chickens will live on a diet of mealworms and other foraged organic waste. 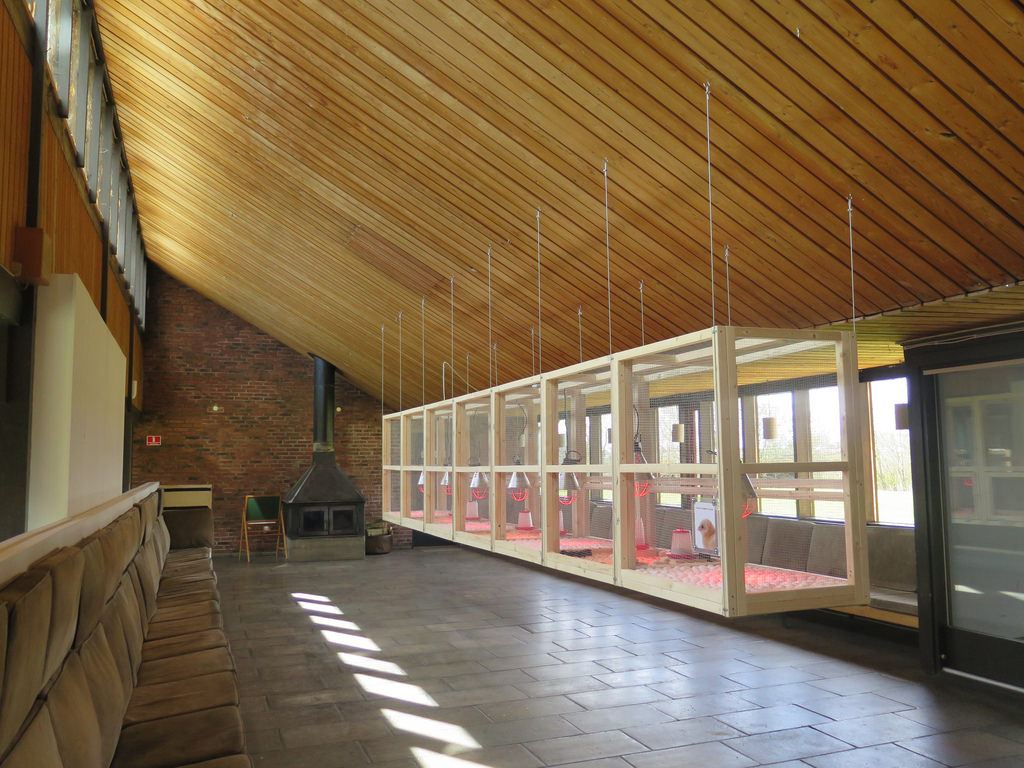 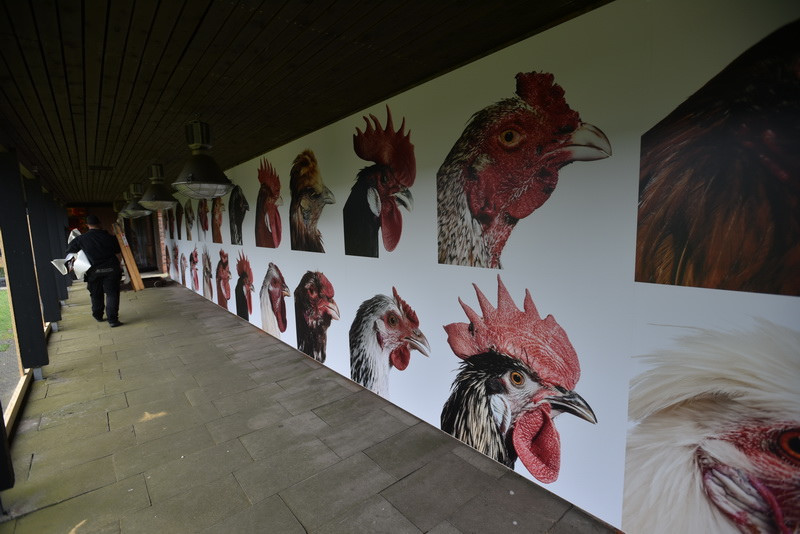 There’s a few videos in which Koen Vanmechelen explains his work. This is a recent one:

The Planetary Chicken and the Cosmopolitan Chicken are on view inside the Herning Højskole as part of biennale 2017 Socle du Monde Biennale – to challenge the Earth, the Moon, the Sun & the Stars. The event remains open until 27 August 2017.