TAKE me BACK to JUPITER!, Drew Thornton‘s master project in Biological Arts at SymbioticA, is an immersive virtual reality console for flies. During the exhibition of the work, human and insect participants ally to fight the invasion of dangerous aliens.

The arcade-style video game is both a tongue-in-cheek interactive biological art installation and an interdisciplinary project grounded in scientific research about houseflies behaviour. As the artist explains in the video below “things don’t have to be logical to be meaningful.” The experiment has several goals: to “entertain” all players, to invite to a reflection on non-human consciousness but also to offer an opportunity to rethink the way we view “annoying insects” at a time when insects numbers are plummeting across the globe, threatening a “catastrophic collapse of nature’s ecosystems”.

Interview with Drew Thornton by Weilin Chi (Science Communication student at the University of Western Australia).

I caught up with the artist as he was putting the finishing touches on the installation:

Hi Drew! Let’s start with your background! You worked as an illustrator so what brought you to biological art?

In actual fact, my education has always been in both art and science, and I for most of my life I imagined I would end up in a field related to the biological sciences. Illustration has mostly been something I did for my own enjoyment, as a creative outlet.

I love learning about the world around us, and particularly I love the intricacies and surprises found within biological systems. However, I also think that creative expression is how I come to grips with my (and our) place in the world, and without this outlet I was struggling to to make my studies feel meaningful.

It was great to discover a field where I can bring all of my skills to bear, rather than always feel like I’m always leaving half of myself on the sidelines. Also, I still found an opportunity to include some of my own artwork in the project, putting together an illustrated game manual to accompany the game. 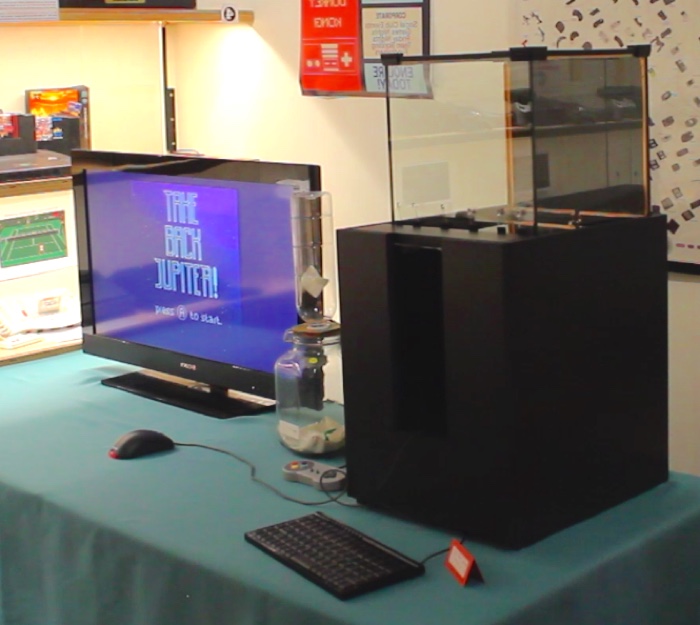 You are interested in how we perceive consciousness in non-human intelligence. Do you think that this topic is not adequately addressed by the scientific community and/or understood by the public?

I think that beneath our everyday use of the term, consciousness is a bit of a vague notion, and ultimately unhelpful. The thing about consciousness is that we can’t perceive it—it seems to be too closely coupled to the act of perception itself to be directly observed. Of course, we experience consciousness within ourselves (or think we do), but we can’t step outside of consciousness in order to quantitatively describe it.

Honestly, trying to explain even human consciousness risks talking yourself in endless circles, and outside of humans it only gets trickier. That’s where art can be valuable, as it’s more interested in the real experiencing of things than in the illusion of understanding.

Why did you think that gaming is a good medium to explore consciousness in flies (or any other animal)?

Acts of play are a great way of actively engaging an audience, and can create good will and the sense of presence and immersion in players. It’s a way of building and troubling interrelationships in a controlled environment. The digital medium is a tool to connect the subjective worlds of disparate participants (human and animal) through a simulated and translated experience.

Alright, so maybe that all sounds like techno-babble. What I really think is that to explore consciousness, you need to actually step outside of your own mind and interact with others. Gaming is a great way to facilitate that kind of interaction.

And i guess this is a stupid question but why flies? Wouldn’t have been easier to work with pigs which are notoriously smart and social creatures for example? Besides, pigs are cute and flies perhaps a bit less….

Ahaha, no! This is the most important question to ask. The glib answer is that I relish a challenge. Pigs and especially dogs are animals most of us already feel like we can relate to; sure it would be fun to take your dog to the arcade, but doing so doesn’t really tell us anything new or surprising about dogs or the way we perceive them.

On the other hand, flies are animals that we have all encountered, but likely haven’t given much thought to their psychology. I wanted to push myself creatively, theoretically and technically and challenge the audience to relate to something outside of their normal comfort zone.

I think there’s value in that, too: ecologically, insects are important, and currently imperilled. Something needs to change in the way we relate to them—individually and culturally—if we are to successfully cohabitate on this planet.

Also I just think insects are cool. Flies can be cute, I promise!

TAKE me BACK to JUPITER! is an immersive VR gaming closure in which humans can engage in an arcade game with flies. Could you describe the game? What do humans and flies have to do?

Okay so first, I need to offer a small point of clarification for readers: the console’s virtual reality enclosure is only for the flies; I just couldn’t make controllers small enough for their tiny hands, ahaha. The enclosure is a glass cube with a row of LED lights along the front, and a motion-tracking camera placed at the bottom. This gives the fly visual targets to react to, and allows its actions to effect the game environment.

In the game, the human and fly player work together to fend off incoming aliens. You, the human, illuminate targets for the fly by shining your spaceship’s spotlight on columns of aliens (think Space Invaders, but with extra teamwork). All the fly has to do is fly towards the light, which—if it’s quick enough— eliminates the corresponding alien on your screen. 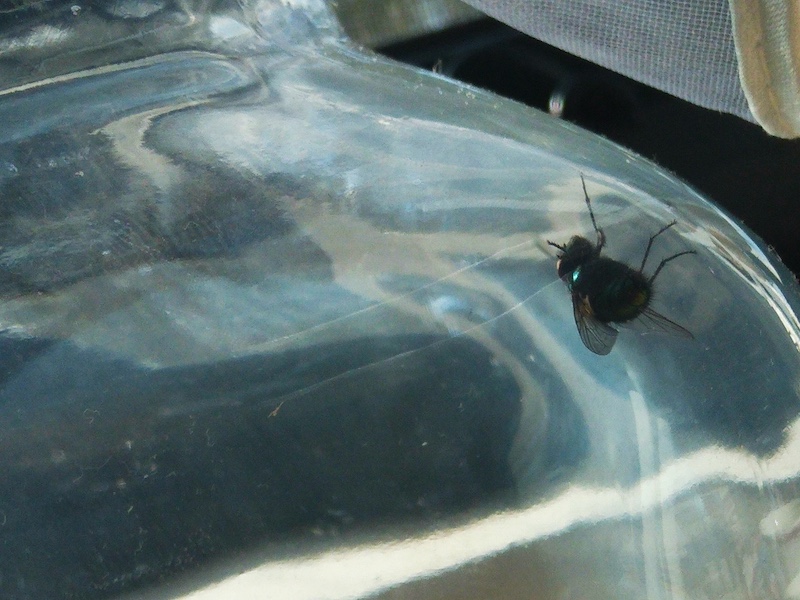 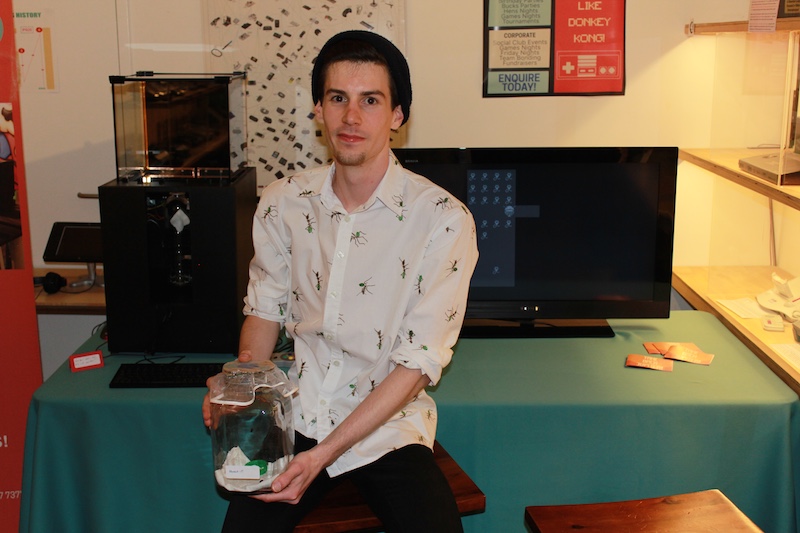 How did you design the game to ensure that flies would actually react and play or look as if they were playing with the human audience?

I wanted this project to be grounded in the actual behaviour of flies; rather than trying to produce new fly behaviours catered towards a human gaming experience, the aim was to design for an existent point of commonality. This involved first understanding how flies perceive and experience the world, then creating a game environment where fly behaviour is aligned with human experience (and vice versa), and finally the technical design and build of a console to facilitate this kind of play experience.

Male houseflies have a territorial pursuit behaviour, which can be reproduced in response to flashing lights or suspended targets (which to a fly’s vision look like other flies). Not only is this something I thought I could accommodate in a digital environment, it’s also an appropriate game activity—flying around in chase of enemies could be made into something both insect and human could enjoy*.

Did you test the game with an audience? How did it go and what did you and other players learn from the experience?

The game prototype was presented to an audience at a “launch” event in October, hosted by game museum The Nostalgia Box (a great venue, worth a visit) in Northbridge, Perth.

Unfortunately, I was unable to exhibit a fully operational version of the game console—the timeline for my build was blown clear out of the water by a computer communications protocol issue, and as a result I didn’t quite manage to troubleshoot the whole system. On the night it basically came down to a faulty light-switch!

Even so, I was really taken with the audience response. While they didn’t get to play the game, I think even the promise of it was enough to make people view the fly as a teammate rather than adversary. So even if the project was a technical failure, it felt like a conceptual and artistic success.

The title of your work is quite intriguing. Why did you call it TAKE me BACK to JUPITER!?

I wanted to attribute some of the grandeur and mystery of the gas giant to organisms that seem humble and lowly in our eyes.

Jupiter is the largest planet in our solar system, dwarfing Earth, and its gravitational effects contribute to the relatively sheltered and stable orbits of the inner planets (we haven’t had an extinction-level impact in over 65 million years!) This seemed comparable to the role of insects in Earth ecosystems, where

It’s also a dual title, reflecting the recurrent apposition of perspectives in the project: in the animated title sequence, “TAKE me BACK to JUPITER!” becomes “TAKE BACK JUPITER!”. The allusions in the game manual are similarly vague about the nature of the alien conflict. When we return to Jupiter, will it be as prodigal children, or cruel invaders?

Any upcoming work, event or field of research you could share with us?

So I have a few projects ticking over, including a book chapter hopefully being published late 2020/early 2021. The topic is “sexy fish monsters in fantasy and myth”, which I assure you is academically very rigorous. I’ll also be giving a special Valentine’s Day lecture on the subject in February, as part of the SymbioticA Friday Seminar series.   I pushed myself pretty hard with this project, so I’m taking it a little more relaxed at the moment, and I’d like to revisit TAKE my BACK to JUPITER! at the start of next year for a more finessed exhibition. Meanwhile, I’d like to get my website up and running properly (it’s a real mess right now), and I’ll probably keep uploading little doodles to my page whenever I feel like it.

*I know that using “enjoy” to describe a fly’s experience might feel incredulous, but whether flies’ behaviour is motivated by an internal feeling of gratification or not, they do it all the same so I think it’s a forgivable stretch.