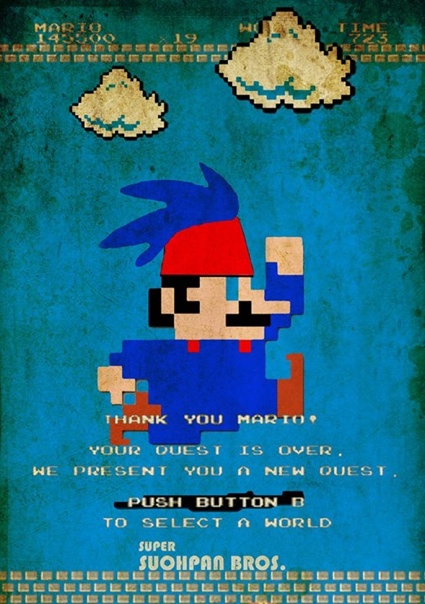 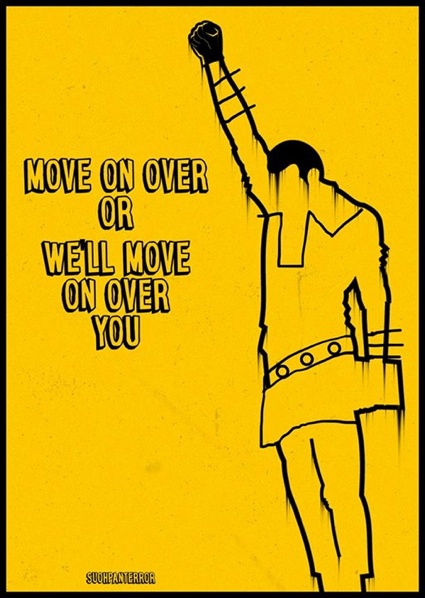 Two years ago, indigenous and non-indigenous activists started joining forces to stop a UK-based mining company, Beowulf, from carrying out another drilling program in Kallak, in northern Sweden. Local opposition to mining projects is nothing extraordinary. In other parts across the world, people are campaigning against drilling, fracking, mining and other projects that translate short term profit into long-lasting damage to the environment (if you have any doubt about this, check out a story this morning about a Swedish mining town that will have to be moved away or ‘risk plunging into the earth.’) But what made the fight against the mining company particularly moving is that Kallak is a reindeer winter grazing land and an area of great spiritual and cultural importance to the Sami Peoples.

The Sami live in the the Arctic area of Sápmi, which covers parts of far northern Norway, Sweden, Finland and the Kola Peninsula of Russia. They are regarded as a minority in these countries but they’ve inhabited that area for at least 5,000 years, live in close connection with nature and are one of the very few remaining indigenous people in Europe. The right to own their own land, the right to speak their own language or live according to their own culture is dependent on the nation states within which they live. Finland, for example, still has to ratify the ILO Convention No. 169 which would grant rights to the Sami people to their land and give them power in matters that affect their future. 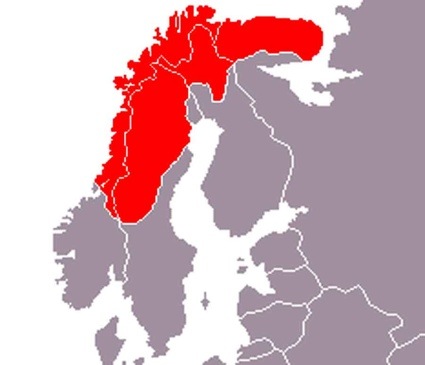 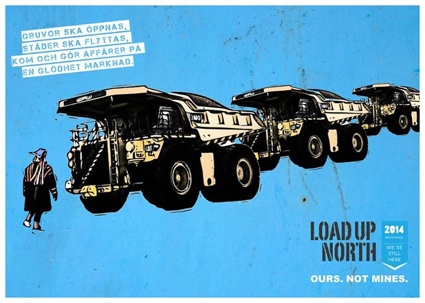 The Swedish government ended up refusing to allow Beowulf to exploit the Kallak area for iron ore but that doesn’t mean that the fight is over for the Saami. They inhabit what is probably the last true wilderness of Europe and because this wilderness is rich in precious natural resources, the Sami have to face many other cultural and environmental threats.

So far, we haven’t hear Saami people’s voice a lot outside of Scandinavia but this will hopefully change thanks to the work of a Sami collective called Suohpanterror. The anonymous group of artists uses wit, iconic images and humour as weapons to comment on the issues their people have to experience on a daily basis: discrimination, racism, marginalisation, colonialism, dam building, logging, military bombing ranges, as well as exploitation by the tourism and energy industries. And of course, climate change.

Suohpanterror reinvents, re-purposes and ‘Sami-fies’ well-known icons of advertising, art history, cinema, street art and other manifestations of popular culture to striking results. The first time i saw one of their images, i had no idea what it represented exactly but i could sense that there was something powerful and meaningful at stake.

I recently got in touch with Jenni Laiti, a performance artist and spokesperson for Suohpanterror, and she kindly accepted to answer my questions via a skype interview. I wrote down out Q&A: 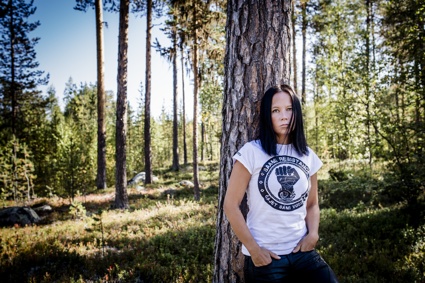 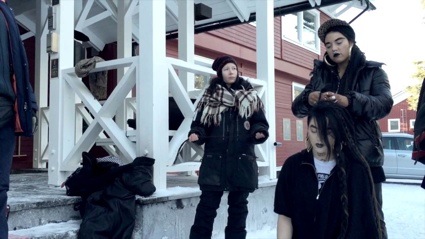 The Saami Manifesto 15, a non-violent direct action performed last month at Jokkmokk Winter Market, one of the biggest gatherings in Sápmi

Hi Jenni! Where does the name Suohpanterror come from?

Suohpan means lasso. The lasso plays an important role in our culture. To catch reindeer, you need a good lasso hand, it´s called Suohpangiehta, Lasso hand. And of course, it also has a deeper meaning. We are very peaceful people. If we had our own army, the lasso would be our weapon of choice.

The posters you make are really striking. But being from Belgium i suspect that i’m not the best person to understand these images. Which kind of reaction do you hope to raise with the posters? Anger, laughter, mere uneasiness?

Outsiders can’t read the symbolic the way we do. To us these posters often have a wider symbolic and several layers of meanings. Each member of Suohpanterror has its own idea of what the images convey. Some are meant to make you angry. Others are ironic or satiric. Some have more of a ‘feel good’ feeling. Others describe the anxiety we are carrying within ourselves. Some makes us feel powerful. Etc. And of course the images will resonate differently according to who you are.

Take the Suohpanterror version of the American We Can Do It poster for example. Every one recognizes the image and where it comes from. It’s America, it’s feminism. It will have additional meanings for a Sami, a Scandinavian or someone from another part of the world. To us, it conveys an encouraging message, it says “This is who we are and we can do it.” 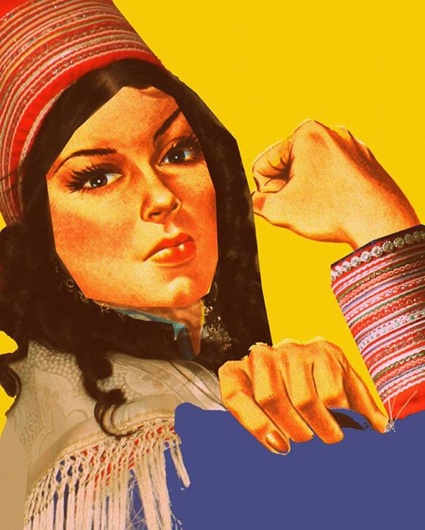 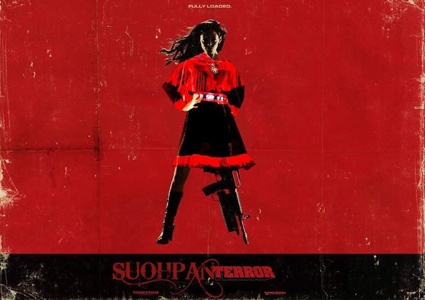 More generally what do you think that images can achieve? Why use posters rather than other forms of action?

One of the main reasons is that there is a lack of this kind of art in Sami culture. So the posters are filling a gap. On the other hand, they make for good communication between us and other people. They are easy to understand and everyone can also perceive the added Sami dimension of these pictures.

But it doesn’t stop at images. There are many other revolutionary things going on. I also do performances, for example. We also use cultural jamming, performance, artivism, direct actions, etc. All the strategies are useful to us.

Other members of Suohpanterror prefer to remain anonymous. Is there a reason for that?

We are indigenous people, also a minority and face a lot of racism. It is very difficult to live as a Sami today when your culture is not appreciated, when you and your people are hated and the majority doesn’t share the same values. The Sami are little more than 100 000 people and we live in small communities. Some of us want to protect themselves and their families from the physical and psychical violence and threat that we are already experiencing.

Would you mind commenting on some of the images below? 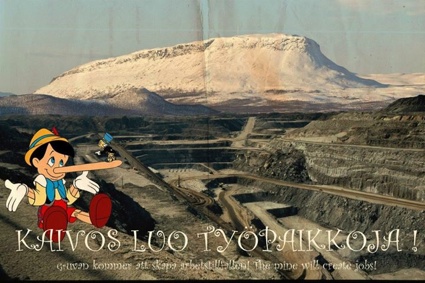 The background of the image is a mine in North Sweden. It’s a reference to the touristic marketing campaign Visit Lapland. Our land is the last wilderness in Europe and the state is happy to welcome everyone to visit it but what if all that’s left to see one day are just mines? 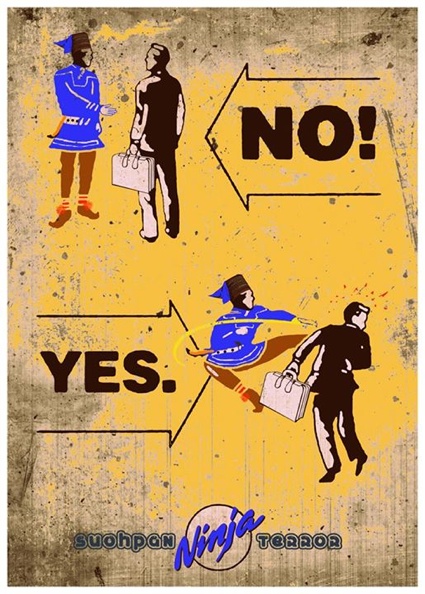 We are peaceful people. We don’t want fight. On the other hand, it’s difficult not to get angry at the way companies are treating us. At every stage of any discussion, we have to listen to a monologue (they call it a ‘dialogue’.) The only way companies enter in a dialogue is by speaking and not listening to anything we have to say. And then suddenly the meeting is over. So i think what this image says is that both sides need to be involved in the discussion for a real dialogue to emerge. If instead companies continue this deaf monologue, we should just kick them out! 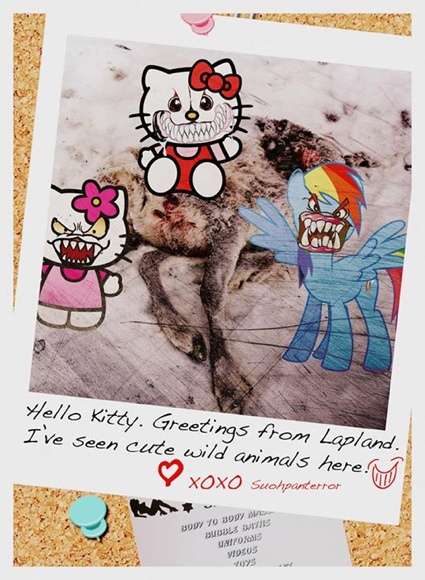 In Finland, both the government and the tourism industry exploit us, sell us without ever asking for our permission. They describe us as cartoon characters, who smile, who are cute but aren’t real people. The reality however, is that their policies that do not support our livelihood are killing the reindeer. 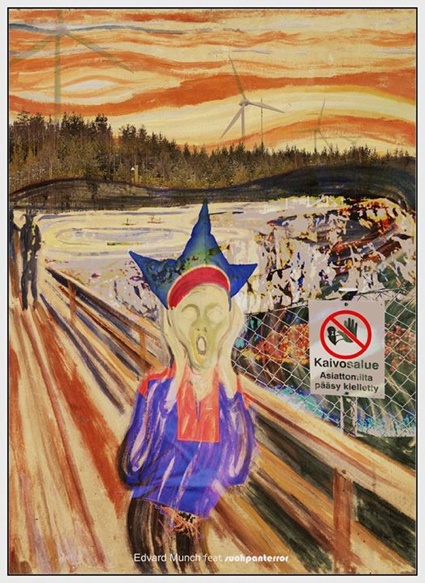 The character of this version of Edvard Munch’s The Scream is horrified by the many ways our land is exploited. There are wind turbines, hydro power, mining. The sign says “Mining Area. Trespassing Forbidden.” This image describes what is really happening in Sápmi, our homeland, which has been colonized and exploited and have been dislocated and disconnected from our land and from each other. This is the reality we are living. Or more, instead of living, we are just surviving. 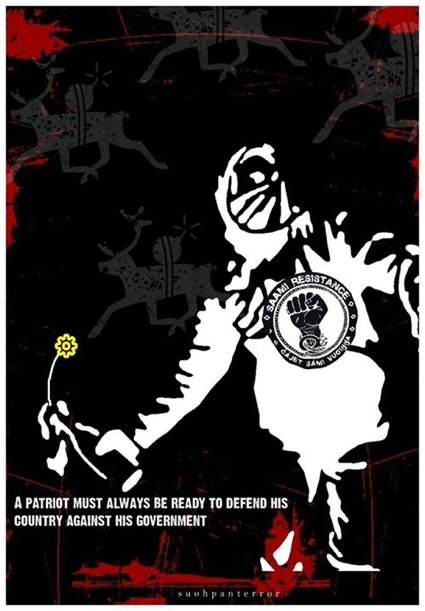 Sámi rights movement is having this campaign “Show your Sami spirit.” And this is one of the symbols for the Sami rights movement. It’s quite an aggressive picture. Even the reindeer are carrying bombs on their back. The image is challenging us, calling for a revolution, a mobilization. We need to defend our own country, our people. 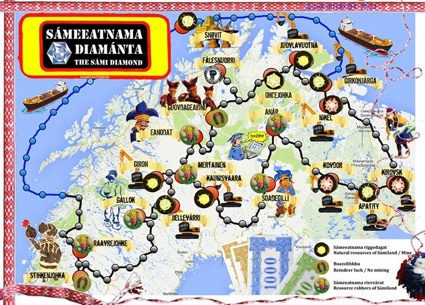 This is a reference to an old game popular in Sweden and Finland. Afrikan tähti (the star of Africa). If you superimpose the map that shows the protected zones of Sapmi and the areas for reindeer herding with maps that display active mining areas and areas with a high potential for mining all kinds of resources, you realize that they are in conflict with each other. If you combine touristic infrastructure, logging, hydro power, mining and zones threatened by climate change (that’s actually the biggest threat for us), we’ve got nowhere left to escape. Mining companies are arguing that they will only implement ‘sustainable’ mining that can coexist with reindeer herding but that’s not possible. Mining companies come from Canada and Australia. They arrive, they exploit the land and when they are done, they leave nothing but a big hole behind them. The land never recovers from it. I recently went to visit an area that had been mined 20 years ago. It was supposed to be a ‘recovered’ area. But the reality is that the land had not recovered at all.

We are living in an Arctic area and the legislation about land recovering from mining is made for southern areas. Regrowth is much slower over here. What we’re fighting for is our very existence, our land and our right to use it.

Is it that bad? Do you feel that the threats to your livelihood have worsen over the past few years?

Definitely. Threats have been multiplying over the past few years. The North of Scandinavia has the last wilderness of Europe and there are many governments and corporations interested in taking over everything they can in the Arctic area. 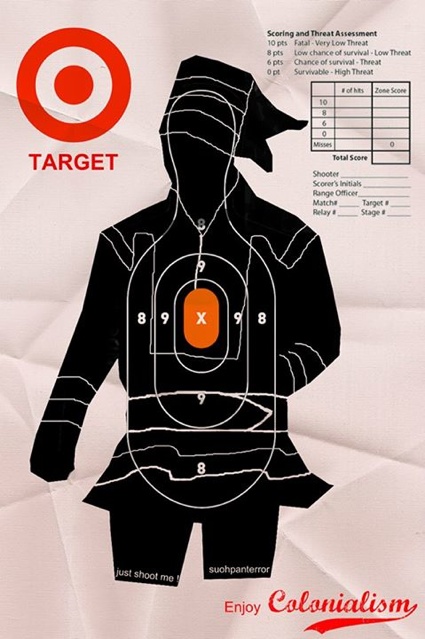 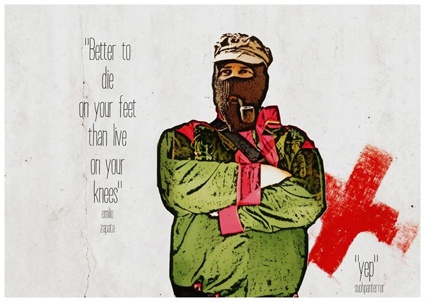 What are the biggest, most urgent issues on top of Suohpanterror’s agenda?

There are two main issues:

And finally, there is climate change. I personally feel that the time is very critical We are going to work more and more on the issue of climate change.

Are you showing your work in galleries or festivals as well? 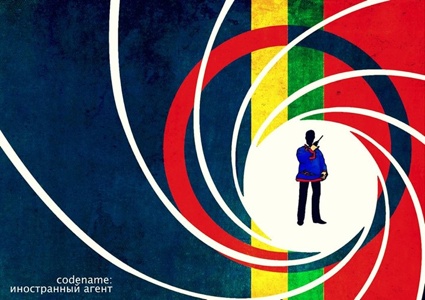 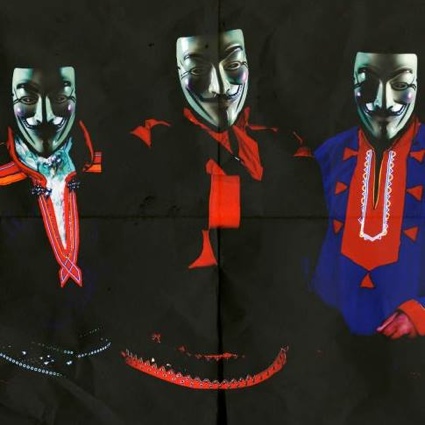 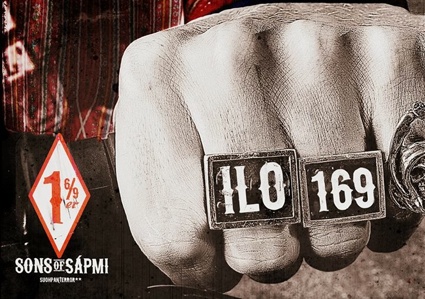 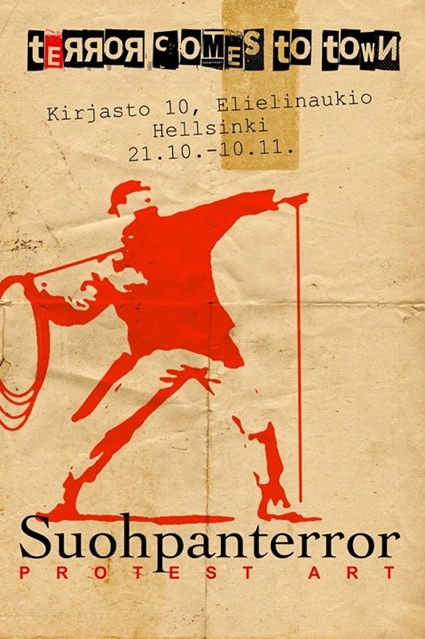 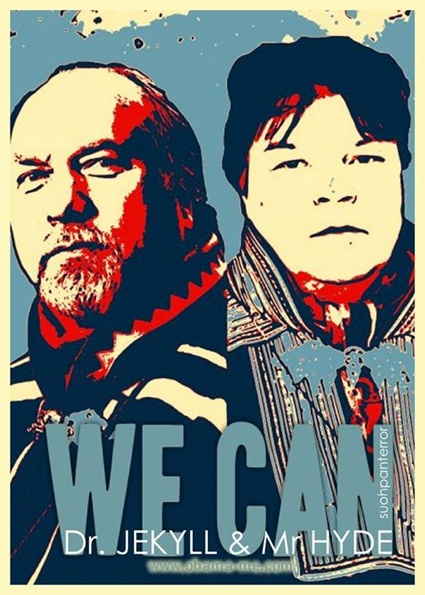 (and a big thanks to Benjamin Pothier and Alexander Svartvatten for helping me get in touch with Suohpanterror!)

See also: Under Northern Lights, an Al Jazeera video report about mining in Sápmi;
The Saami Manifesto 15: Reconnecting Through Resistance ;
and the United Nations Declaration on the. Rights of Indigenous Peoples (PDF.)