A few weeks ago, while in Paris for the always excellent refrag (more about that one as soon as life is back to blissful indolence), i discovered Le Bal and its ongoing En Suspens/In Between exhibition. 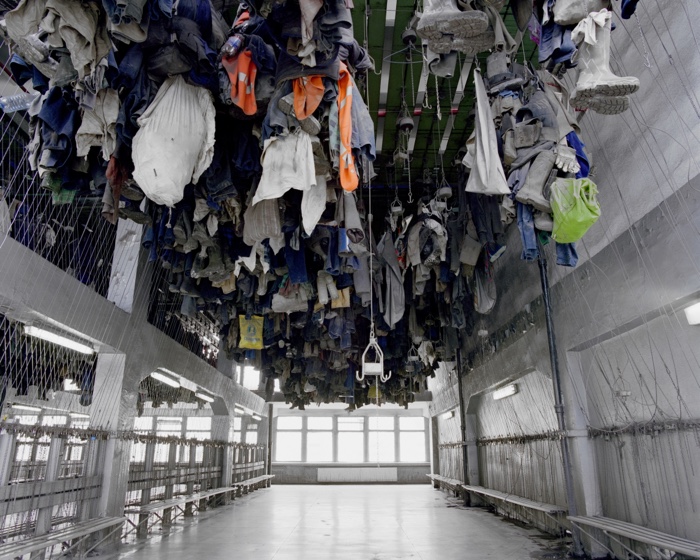 The show explores how individuals and groups of people find themselves trapped in a state of uncertainty and precariousness due to bureaucracy, politics and other circumstances they have no control over. Frozen in a state of suspension, these people have lost their political visibility and with it, their place in the world.

The state of suspension is often likened to being paralysed or stunned, but it is actually a constant, relentless, never-ending struggle to adapt. The threat comes into focus. Time seems to be running out. It is a struggle not to break free from temporality but to enter it.

The exhibition is engrossing, moving and intellectually stimulating. It drags you out of your comfort zone by communicating a sense of unease that deepens as you realize that at some point, you too might end up being locked in limbo. Maybe climate change will drive us to become refugees too. Maybe it’s automation that will dehumanize us. Or maybe it’s some yet unidentified sword of Damocles that will reveal the flaws in modernity’s promises and prevent us from moving forward. 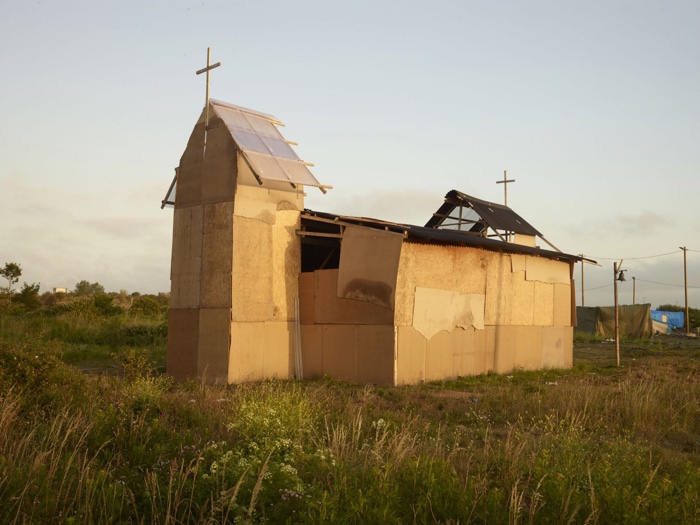 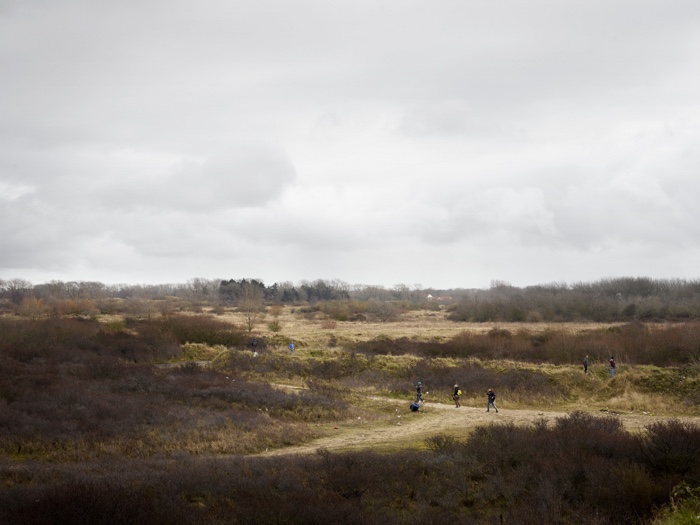 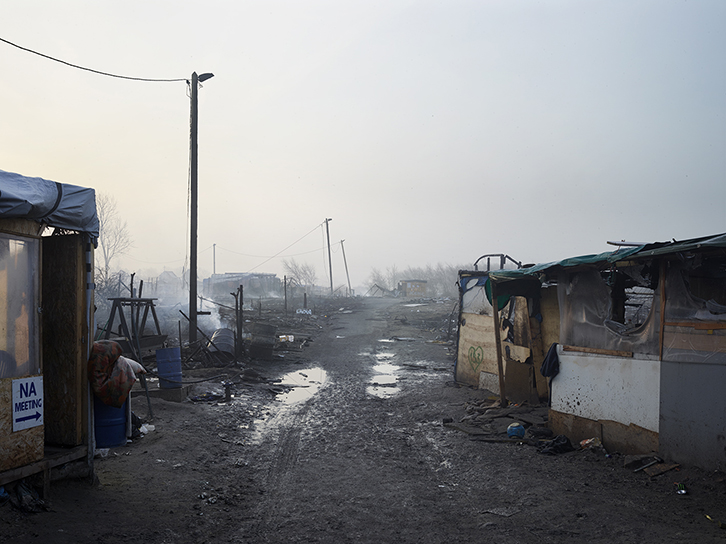 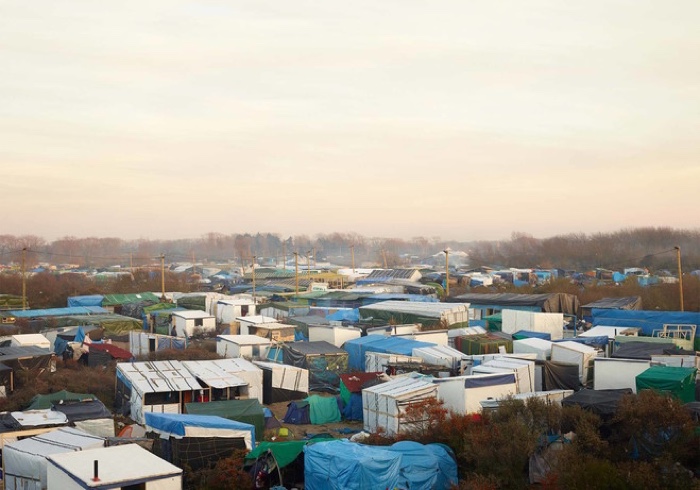 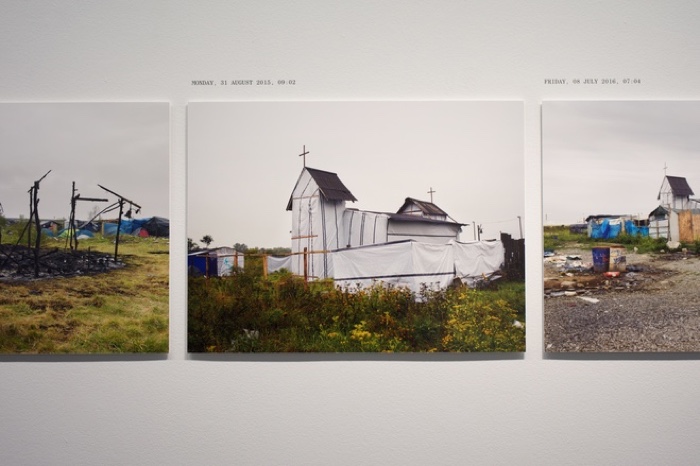 The migrant is one of the most poignant victims of this state of suspension. Henk Wildschut followed the growth, bulldozing and resolute rebirth of the jungle of Calais since 2005. His series documents how refugees transform the landscape. With shacks and clothes drying between trees. But also with structures that speak of a semi-permanent situation: shops, sites of worship, bakeries, libraries, schools, garden, etc. Everything was razed in October 2016, before rising up again, albeit in an impoverished form and with far less attention from the media.

That dignity was expressed in all manner of ways; the neatly folded clothes, the sleeping bags and blanket hung out, the way the surroundings were kept clean and waste disposed of. In the layout of their huts and the creation of small gardens, the inhabitants expressed their personality and individuality. I was moved by this need for security and homeliness. I wanted to use my photography to show how people retain their humanity in an inhuman situation. They symbolise the resilience of the individual. 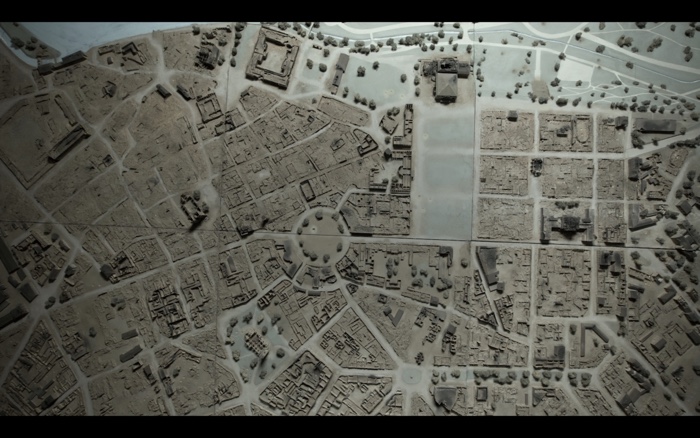 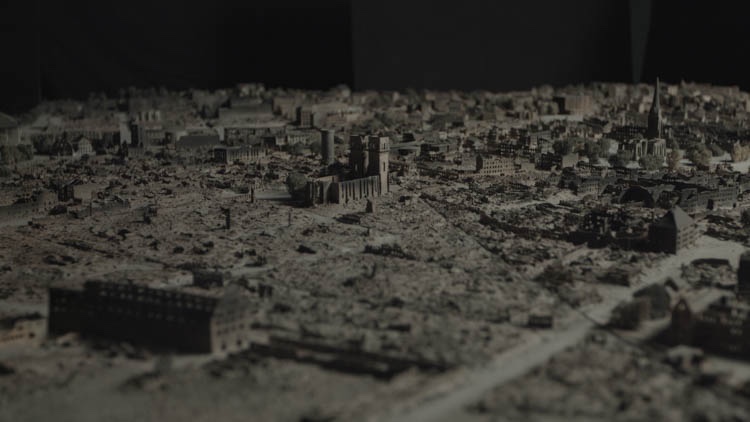 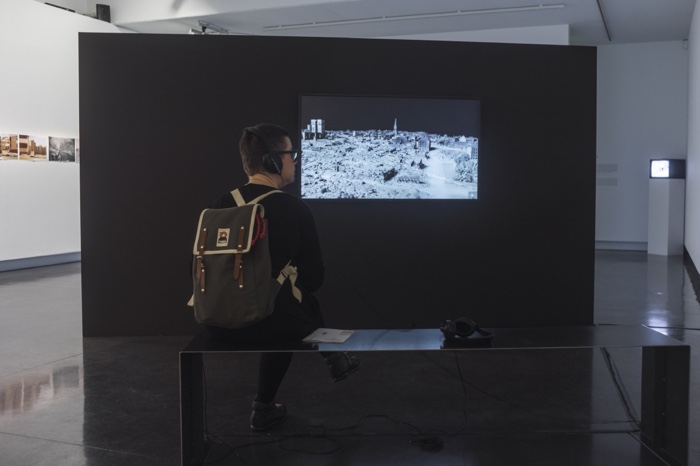 View From Above was the most moving work in the exhibition (at least for me.) The video looks at refugee screening processes and reveals how following their logic to its most absurd extremes might help someone gain asylum.

During the interview necessary to get refugee status, an official checks to see whether you really come from an unsafe zone. He or she asks about small details about the city you claim to come from and compares your answers to a map.

View from Above shows a model of a destroyed city centre and tells the story of M, who undergoes interrogation to gain asylum. Before going for the interview, M spent weeks with people from a town in the unsafe zone. He has never been to that place but has drawn a map of it based on the conversations he had with people who came from there. He studied the names of all the streets, the schools, the major and minor buildings, etc.

When M finally had his interrogation interview, the official questioned him about the town and compared his answers to a map. M’s answers demonstrated knowledge of the town as it was seen from above. It took twenty minutes for M to be granted refugee status. Meanwhile, thousands of people who were actually from that town and other places in the unsafe zone waited as long as ten to fifteen years for the same thing, because their answers only demonstrated knowledge of their towns from the ground. The work thus reveals the gaps that separate administrative practices and genuine human experience. 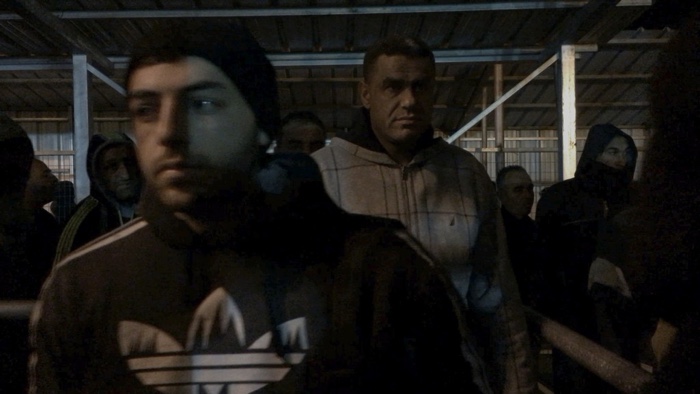 Palestinian going to work in Israel are submitted to this situation of stanby literally, daily and physically when they are forced to go through repeated and mechanical control devices on their way out of the West Bank. Photographer Luc Delahaye tied up a phone to the entrance gantry of one of the checkpoints. The Palestinians, subjected to a system of distrust and humiliation, appear dehumanized and weary. 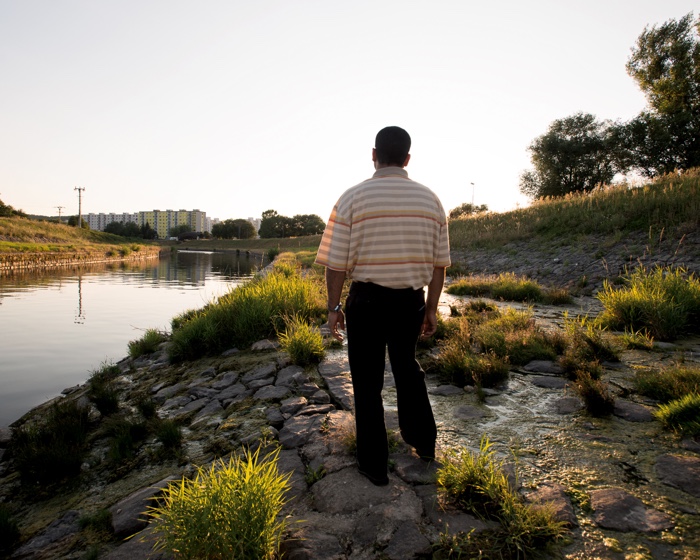 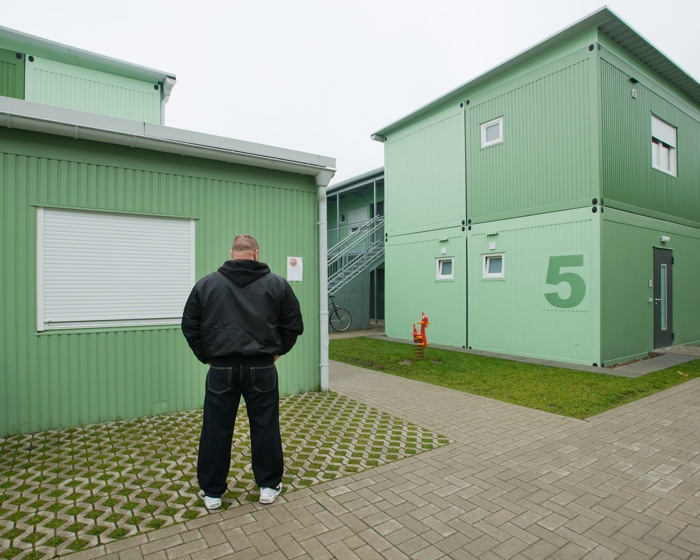 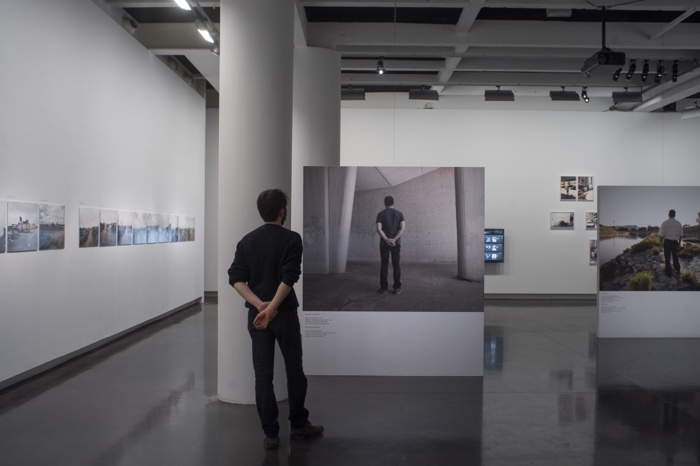 Beyond Gitmo give us a glimpse of the life and state of mind of men who have been released after having spent years incarcerated as alleged terrorists at the Guantanamo Bay. Reviled as the “worst of the worst,” many of these men have actually never been trialed and charged. Some have been released home. Others were displaced to foreign countries. The military prohibits photographing faces at Guantánamo Bay. Debi Cornwall replicates this “no faces” rule in the free world; their bodies may be free, but Guantánamo will always mark them. 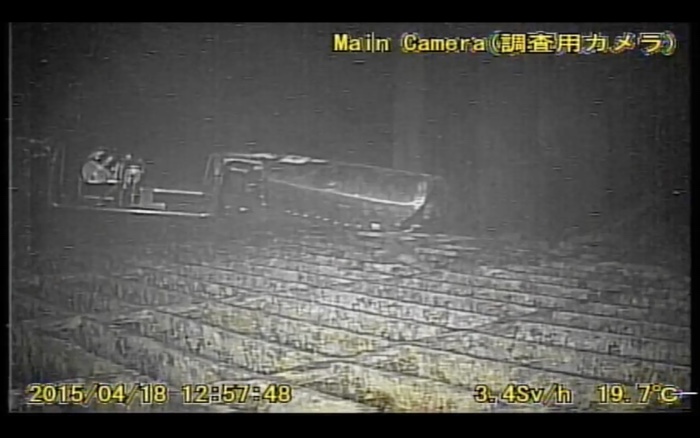 Mélanie Pavy’s film follows a robot sent to investigate and clean up the Fukushima nuclear power plant. After a few hours under the water, the robot eventually explodes. Just before the screen gets black the spectator catches a glimpses of the carcasses of its predecessors. Even machines eventually succumb to man-made disasters.

The cold and sad images suggest the difficulty of recording in film the end of human civilization. 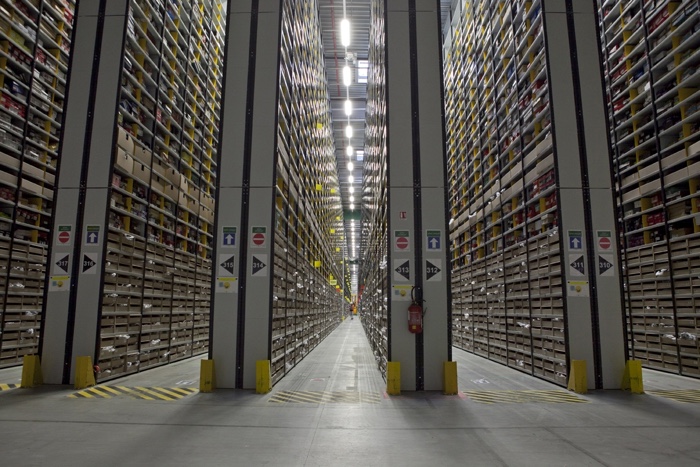 Stéphane Degoutin and Gwenola Wagon’s fascinating video Le monde comme entrepôt de livraison also suggests the end of mankind. Except this time, it is one orchestrated by delivery companies that have replaced men with machines that tirelessly move items around inside gigantic warehouses. There is no place for men in this architecture made for mechanics and algorithms that carry and relocate physical items as if they were just sets of data. 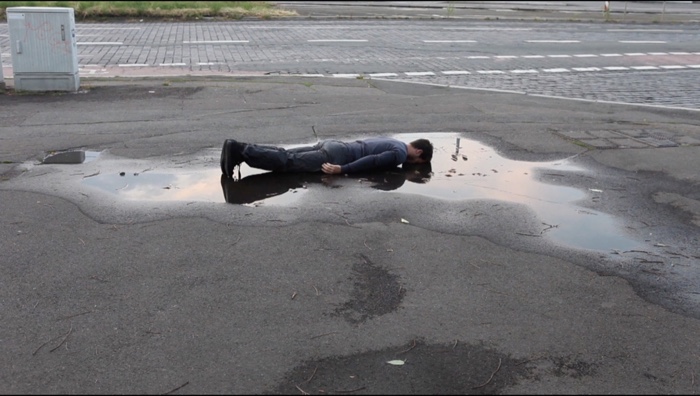 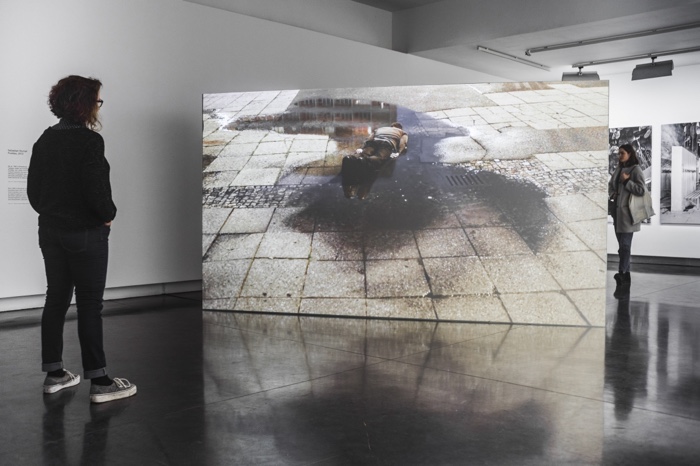 In Between/En Suspens is at LE BAL in Paris until May 13.