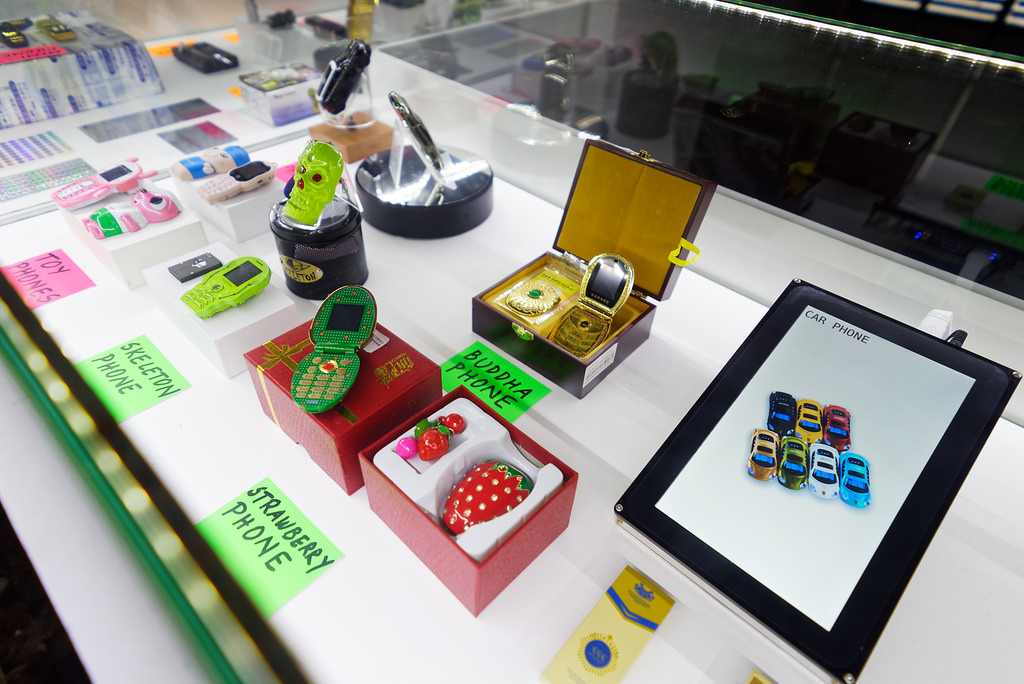 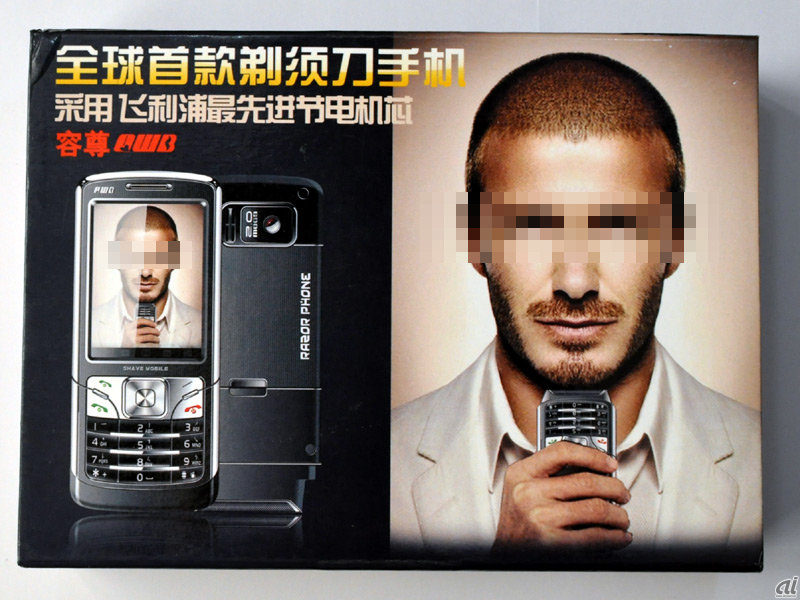 Over the past couple of years, Maria Roszkowska, Clément Renaud and Nicolas Maigret from DISNOVATION.ORG have been quietly smuggling odd-looking phones from China to Europe. They’ve got a phone that doubles up as a stun gun, one that’s shaped like a big strawberry, one you can use to light up your cigarette, one that will assist you in your religious rituals, etc.

These bizarre devices belong to the shanzhai production. They are counterfeit consumer goods, sold at lower prices and boasting multifunctional performances.

There’s a lot to admire about them though. First, they were designed to respond to very specific market needs. Second, they are hybrid products that emerge directly from the technological cross-breeding of the Made in China. These odd-looking artifacts question the hyper-normalised western technological imaginary and challenge the monopoly of our black touch-screen rectangles.

Shanzhai Archeology is an experimental research project that uses shanzhai as the starting point for a critical reflection on the normalization process of Occidental technological imaginations.

After a preliminary research on the industrial and political history of the shanzhai (see The Pirate Book), the members of DISNOVATION.ORG have been building up a collection of some 60 hybrid phones. About half of them were exhibited at the Mapping festival which took place a few weeks ago in Geneva. That’s where i started to talk with some of the members of DISNOVATION.ORG…. 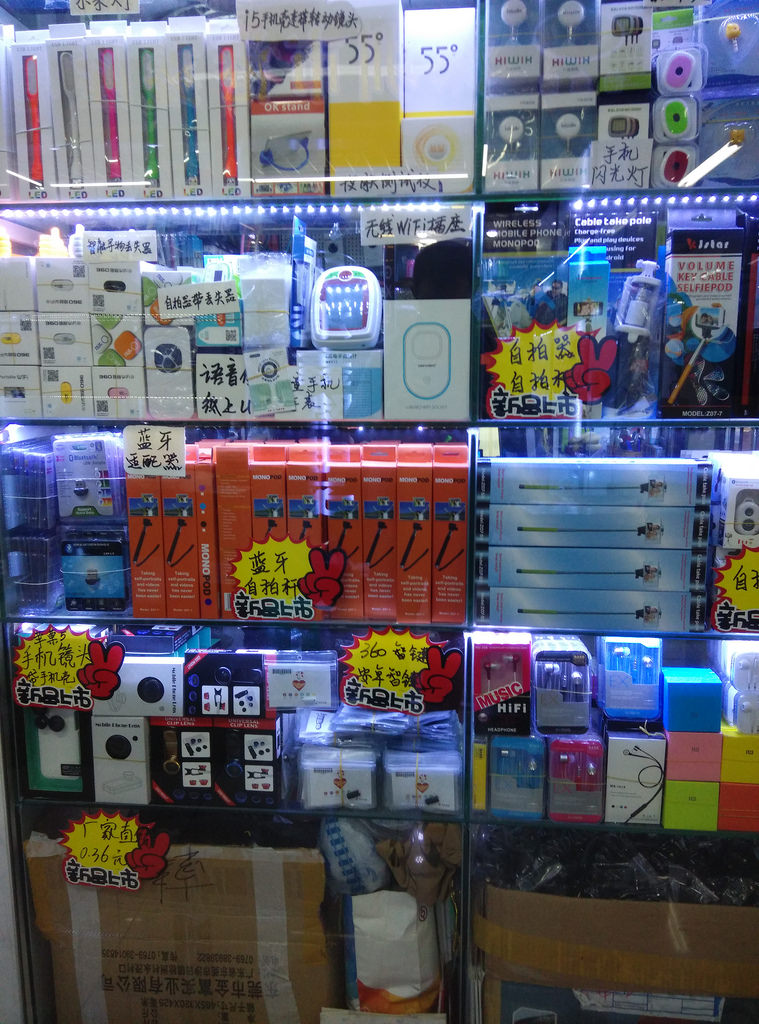 Hi Maria, Nicolas and Clément! How did you go about hunting for those curious handsets? And then how did you manage to ship them to Europe where they are illegal?

For 3 years, we’ve been collecting rare devices online (mostly on Taobao and Alibaba) and in underground Chinese malls. We then stored them at Clement’s and Yuan family in Qingdao, China.
The tricky part started when we had a show in France (for the Biennale Internationale Design of Saint-Etienne), and we had only a few months to bring all the phones from China to Europe where they cannot be legally imported. Many phones feature copies of brand names (SVMSMVG, MORIOROIA), sometimes of multiple brands (PCRSEHE and PORSCHE on the same phone). Most of them would never pass EU, UK or USA safety or branding requirements. They are simply not allowed go through customs. You can actually purchase stickers to pretend they are compliant with the rules, but this is probably not a good idea :) 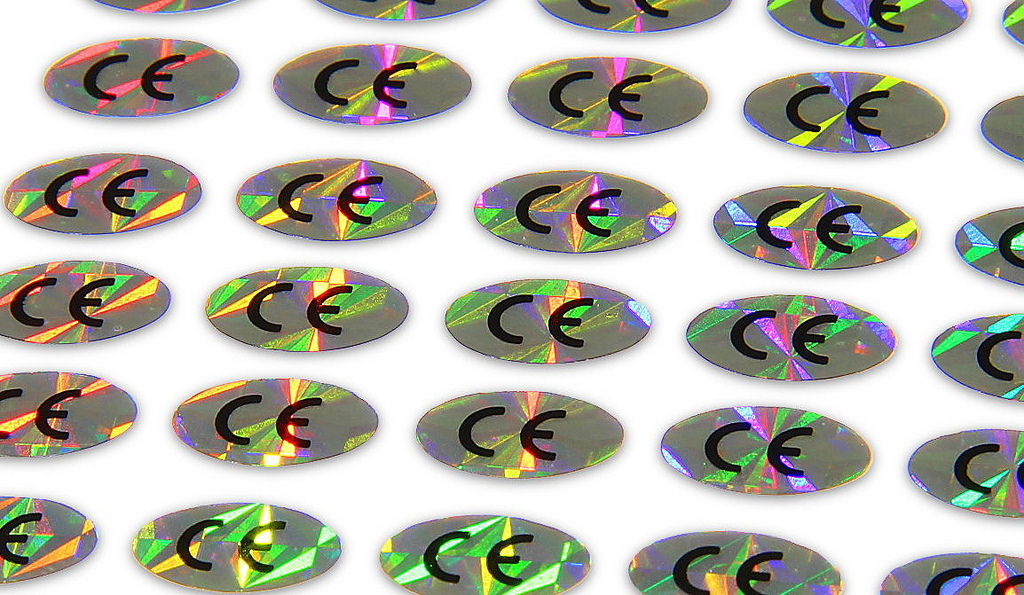 Besides, since April 1, 2016 you’re not supposed to travel with lithium-ion batteries, shipping them overseas from China is now forbidden. We thus had to spend hours on the phone with border control, trade administration offices, customs, and various mail services in both countries. Basically, no official solution exists for electronics traveling as artworks. You’re just not supposed to carry a non-compliant device anywhere in Europe or USA. In the end, we did everything illegally / a-legally. We transported them one by one in planes, we asked family and friends to smuggle them, we had them shipped in slow Chinese post parcels, or broken down into parts and without battery in DHL parcels. So far, we’ve received 80 to 90% of our collection. We also learned a lot about the customs system in the process. 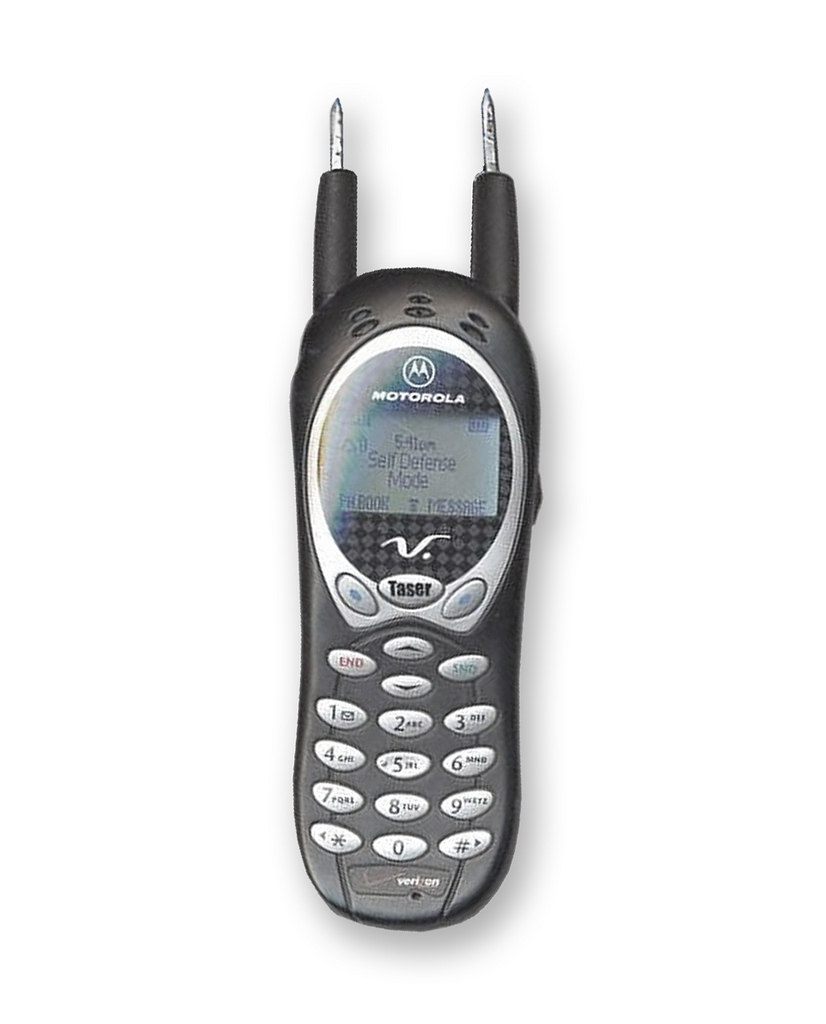 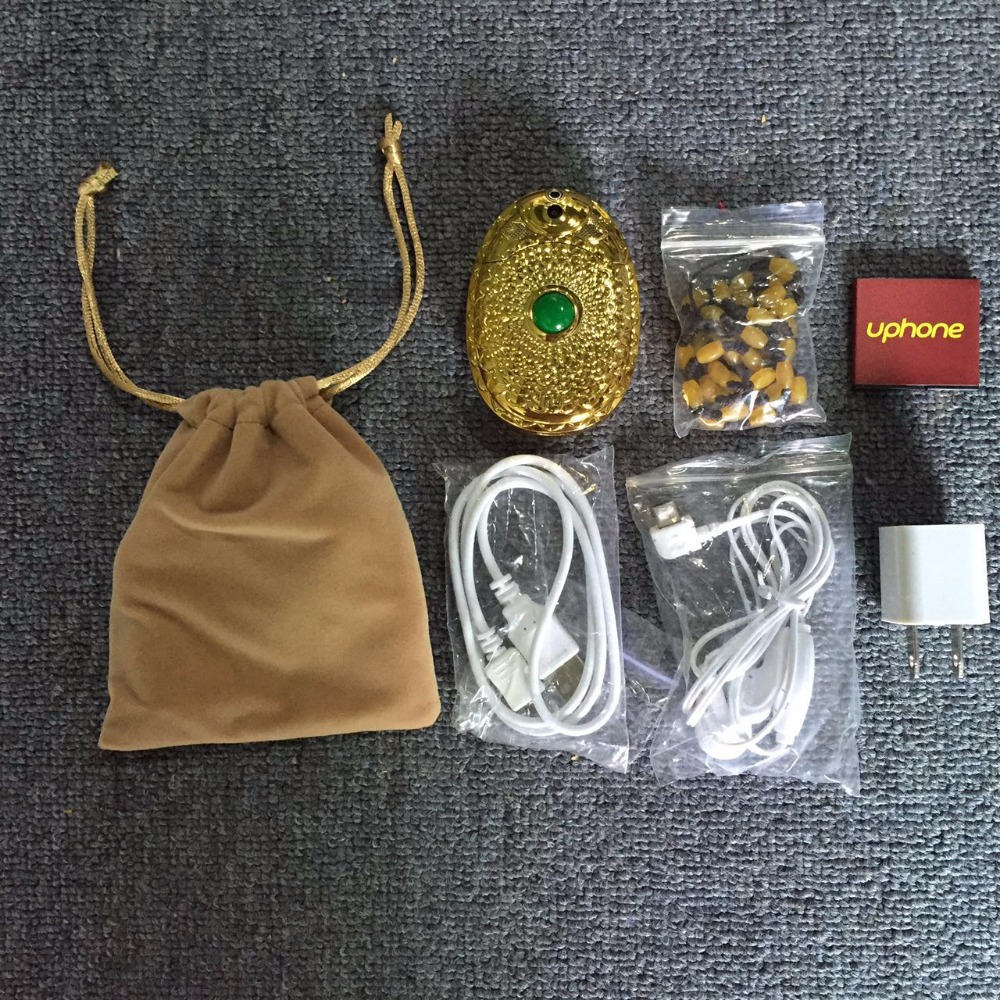 Could you tell us about some of these curious models?

For the Shanzhai Archeology research, we identified a series of phones manufactured in Shenzhen. Each of them combines several functions. They are hybrid objects that reflect very specific uses and are accompanied by stories and narratives.

The Buddha Phone is presented like a “virtual prayer room” – it is equipped with a touch that loads a kind of private, virtual and customizable altar. It is supposed to help Buddhists perform their rituals when they are away from home. You can simulate the burning of incense, replicate purification rites or play music to help you meditate wherever you are.

The Sound System Phone: China has a long tradition of phone for pensioners. The buttons are bigger, the sound is louder and it offers shortcuts for “sonny”, “daughter-in-law”, etc. One of pensioners’ favourite activities (along with mahjong) consists in dancing on public squares. It’s called guangchang wu. The sound system phone was conceived to broadcast loud sound outdoors. It integrates a small support to make it stand in front of the dancers. It also comes with several gigabytes of old-fashioned communist songs that Chinese pensioners are particularly keen on. The dances usually take place in the evening, in small rural villages which often lack street lighting. The phone thus features a powerful torch to ensure a smooth return home after the dance.

Square dance in a Chinese village

The Power Bank Phone: Ghana is currently going through a major power grid crisis: blackouts in the city can last for 36 hours on end. As a result, a significant business activity has grown around the sale of portable USB chargers that can charge electronic devices or even power bulbs. The Power Bank Phone, designed for this particular market, combines a 10000 Mh USB charger, an LED flashlight, and 3 sim card slots to connect the entire family or to take advantage of promotions offered by different operators. 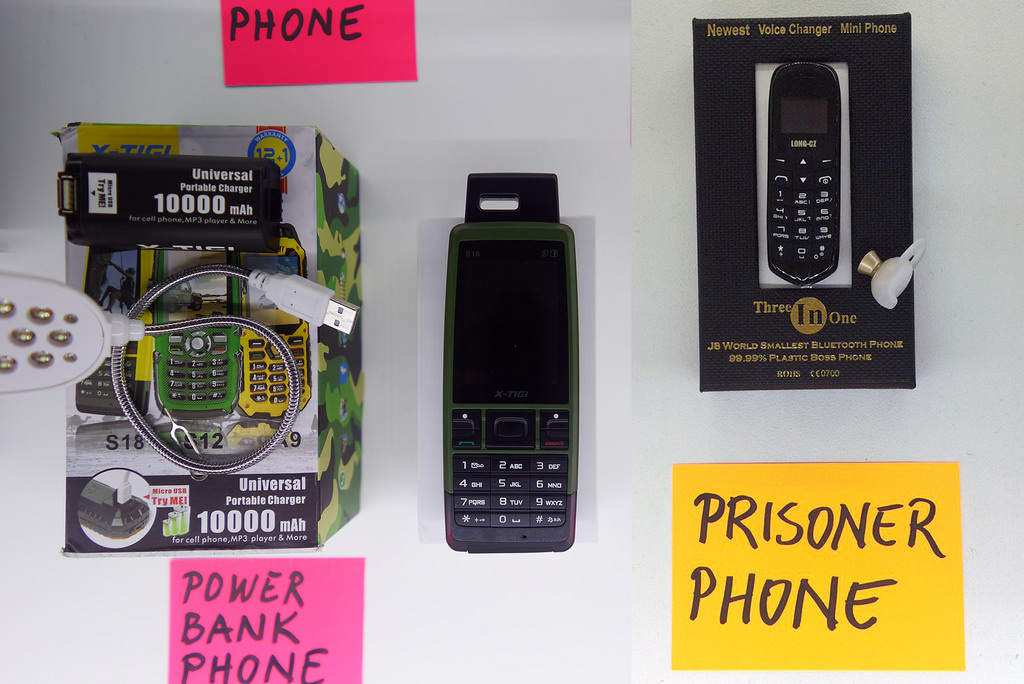 The Prisoner Phone: marketed as “the smallest in the world”, this phone is made of 99% plastic, meaning that it will be barely detectable during checks in prison, it is easy to conceal and transport, especially via drones or carrier pigeons. It is also equipped with a “voice changer”.

The Taser Phone: marketed as a self-defense weapon, especially in case of snatching, the taser-phone is illegal in many countries. It is routinely seized at French customs. 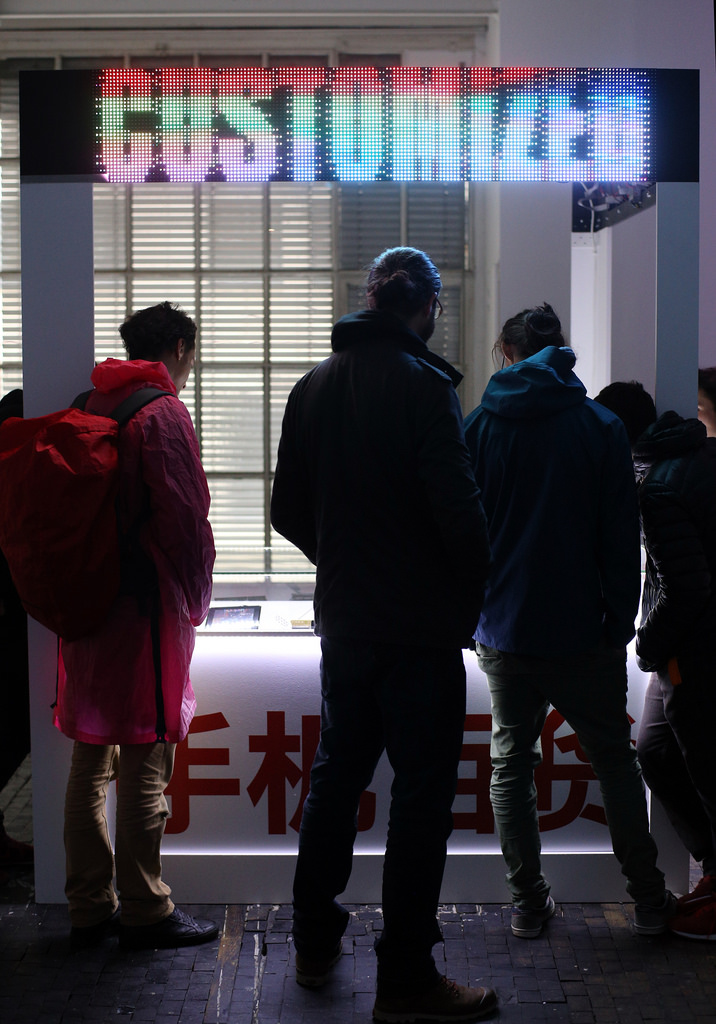 Does the little booth you built to display the phones echo the ones you saw in China?

Yes, the kiosk compiles distinctive elements we spotted in Shenzhen, Shanghai and Hong-Kong. For Shanzhai Archeology, we wanted to insert these telecommunication devices into their original context. Our inspiration were street vendors as well as the ‘malls’, those gigantic covered marketplaces where you can find small shops selling phones, gadgets and electronic components. We also kept a record of the names of the shops, in particular the ones where we bought the phones. This kiosk is called 手机百货 (shouji baihuo), a name used by hundreds of shops in China. Its very standard aspect and the adoption of common brands is a nod: we copy what works. One of the main inspirations for this booth is the Huaqiangbei hub in Shenzhen where you can buy most of the electronic accessories that are shipped from China to be exported. Huaqiangbei counts several thousands phone booths. However, you can find a smaller version of this type of hub in other Chinese cities. We are only presenting one of them, as a conservation copy. 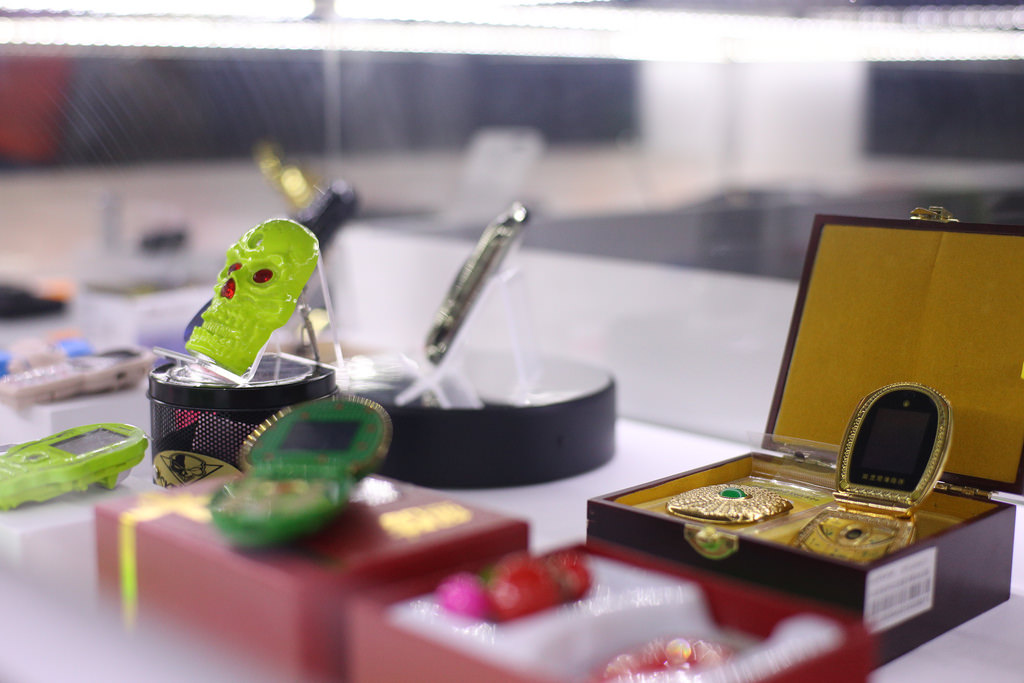 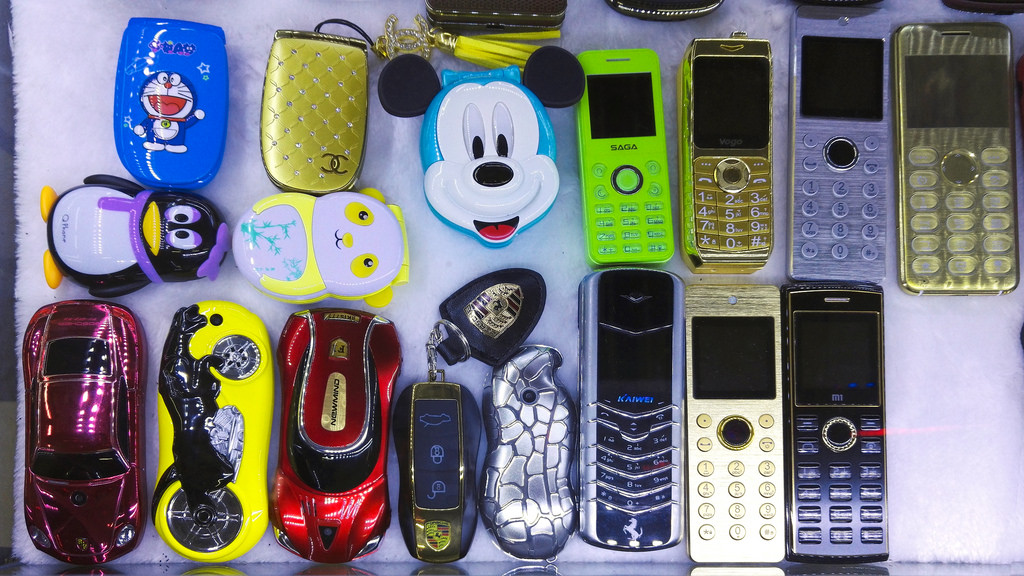 And finally what made Shenzhen such a relevant city to investigate for the project?

It is the geographical area where most of the world electronics are produced and assembled.

Besides, Shenzhen is at the center of attention at the moment, it is THE place to buy electronics or get them manufactured. All kinds of “makers” and entrepreneurs flood the city. The place is changing very quickly, it is moving from the status of factory of the world to the one of world capital of design. The transformation of the city also involves the rewriting of its history, and more generally the history of the ‘Made in China’. Shanzhai products are gradually disappearing from the market, to be replaced by more standardized, more profitable, more globalized ones. In Shenzhen, the shanzhai has reached an almost mythical status, because of the role it played in the history of the city. We also need to keep in mind that the production of these weird phones involves a particularly complicated social reality, with farmers working in factories, often in objectionable conditions. We plan to resume this on-site survey before the Chinese industrial transition has completely erased all traces of this history and replaced it with a more homogenized discourse that focuses solely on design and on the iteration between product and market. With Shanzhai Archeology, we hope to capture and communicate the real history of the production of these hybrid objects.

Thanks Maria, Nicolas and Clément!