Post-Photography: The Artist with a Camera, by Robert Shore, arts journalist and editor of quarterly Elephant. 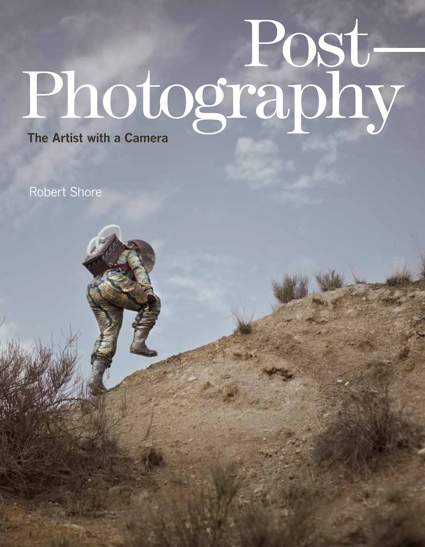 Publisher Laurence King writes: The real world is full of cameras; the virtual world is full of images. Where does all this photographic activity leave the artist-photographer? Post-Photography tries to answer that question by investigating the exciting new language of photographic image-making that is emerging in the digital age of anything-is-possible and everything-has-been-done-before.

Found imagery has become increasingly important in post-photographic practice, with the internet serving as a laboratory for a major kind of image-making experimentation. But artists also continue to create entirely original works using avant-garde techniques drawn from both the digital and analogue eras. 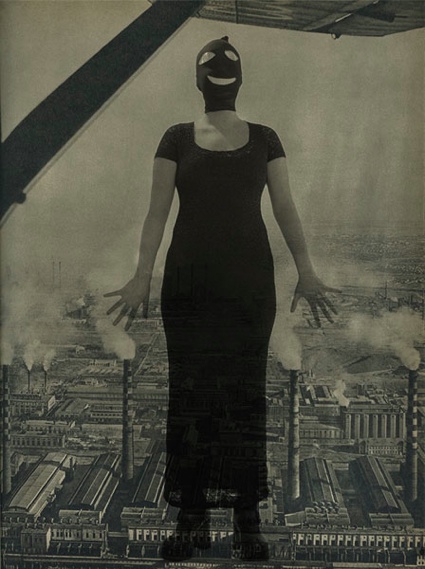 Post-Photography: The Artist with a Camera presents the works of artists who produce photographic works but aren’t necessarily photographers and who use or reference images that already exist. There is, after all, plenty of material for artistic appropriation and reappropriation in our self-obsessed and all recording society: from selfies to CCTV footage, from google street view to prints found in bins.

Post-Photography is one of those beautiful classic coffee table books. Lots of images and concise paragraphs about each artist and photo series. However, Post-Photography is different from most coffee table books: the introductory essay is short but it is informative and pertinent. Not the usual “let’s write something lackadaisical and call it content’ (i learnt the word lackadaisical yesterday while reading the comments of a blog post about this very book. The word is so pretentious i had to use it too.) I’ve read and reviewed my fair share of books about photography and i think this is the first time i encounter a publication that focuses specifically on this phenomenon (or ‘moment’ as the author calls it) and articulates it so clearly and eloquently.

This book is split into five sections: Something Borrowed, Something New shows the artist in the guise of an editor and curator; Layers of Reality recognizes the distinctive outlook that camera has on reality; All the World Is Staged is made of images that document world constructed by the artists; Hand and Eye highlights the materiality of photography; and Post-Photojournalism -which, unsurprisingly, was the chapter that interested me the most- discusses how fabricating reality can be another, sometimes more powerful, way to document it.

Here’s a few examples of the works presented in the book: 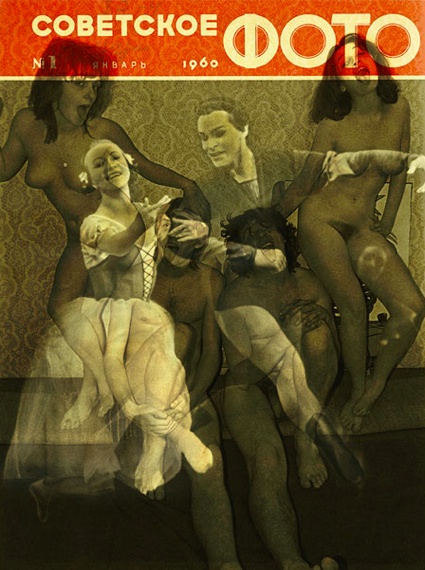 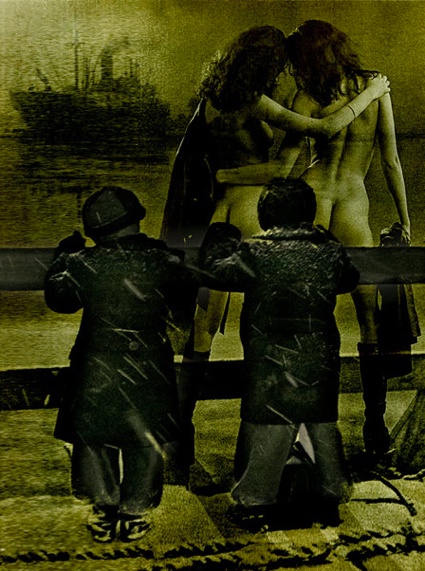 ‘Soviet Photo was the only photo magazine available to photography professionals and amateurs in the Soviet Union from 1926 to 1992. Like other publications of the time, it was an outlet for Communist propaganda. Roman Pyatkovka combined photographs from the magazine with his own works as a photographer making clandestine photos (mostly of naked ladies) in the 1970s and ’80s. “When looking at these pictures today, we are able to reflect on the ideals and disappointments, censorship and creativity of that time,” Pyatkovka writes. 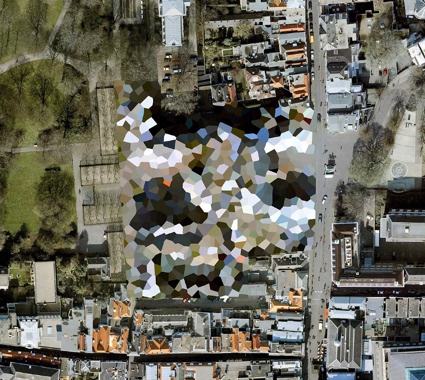 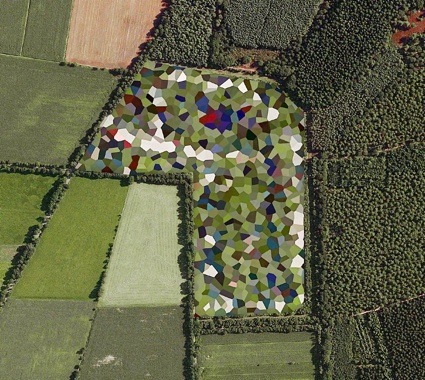 When Google launched its satellite imagery service in 2005, some governments attempted to censor sites deemed vital to national security. Techniques of concealment and restriction vary from country to country: cloning, blurring, pixelization, and whitening out sites of interest. The Netherlands, for example, hid hundreds of significant sites including royal palaces, fuel depots and army barracks behind stylist multi-coloured polygons. Ironically, it made the censored sites even more conspicuous. The country has since adopted a less distinctive method of visual censorship. 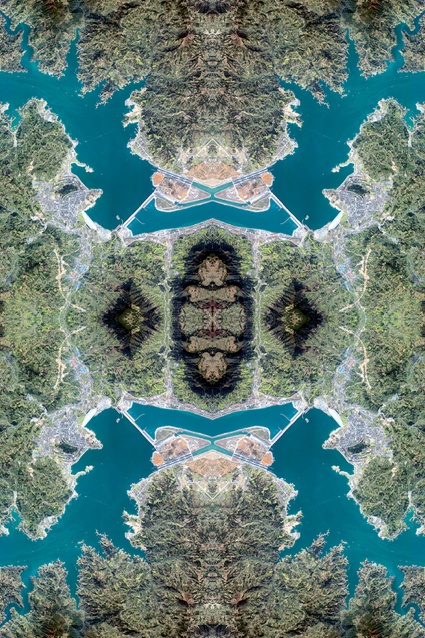 The Anthropocene series are large kaleidoscope photomontages composited from thousands of satellite online images that show some of the world’s most recognizable manmade structures and urban landscapes. This work reflects upon the complex structures that make up the centres of global capitalism, transforming the aerial landscapes of sites associated with industries such as oil, precious metals, consumer culture information and excess.

Each location alludes to specific environmental or social issues. The image above, for example, represemts the urban displacement caused by the Three Gorges Dam. 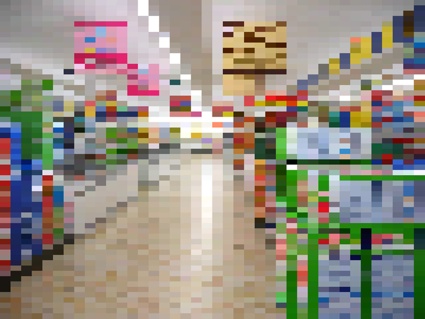 Jonathan’s walmArt series shows “big box” stores around the world pixelated beyond recognition. Distorted as they are, the photos still read as consumer spaces. 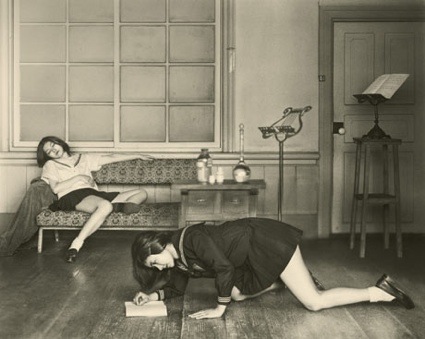 Hisaji Hara are based on Balthus paintings.
(wondering why i added this series as i so dislike Balthus’ work.) 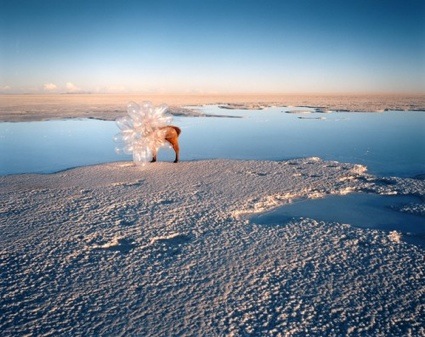 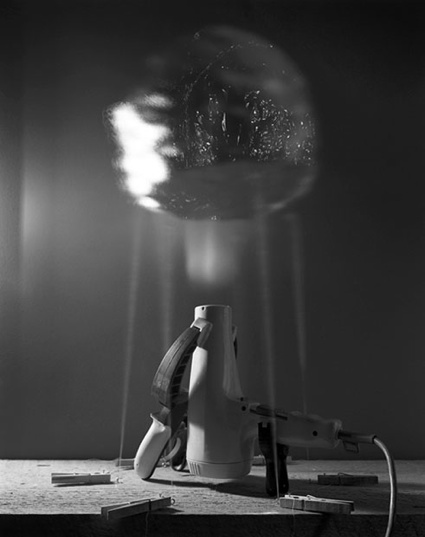 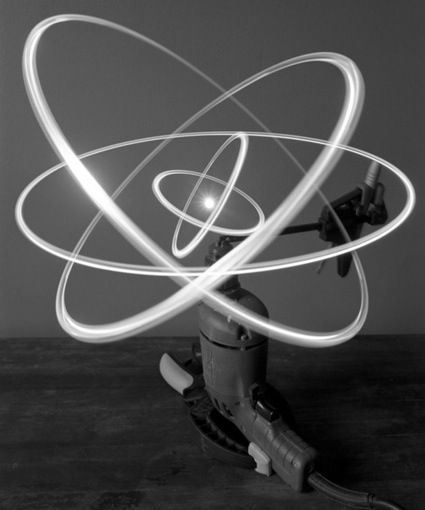 In his Demonstrations series, Caleb Charland used everyday objects or materials he found in surplus and salvage yards to explore the laws of physics and make the perfect portrait of a scientific phenomenon. 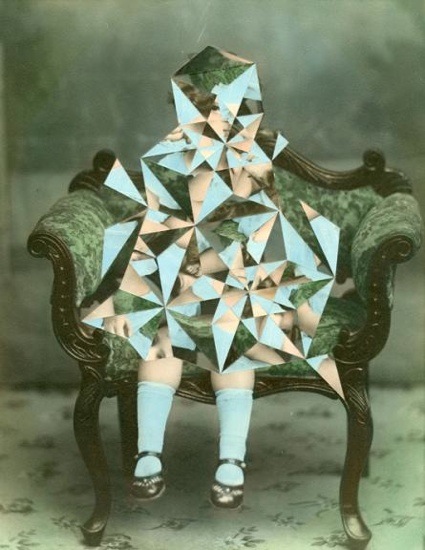 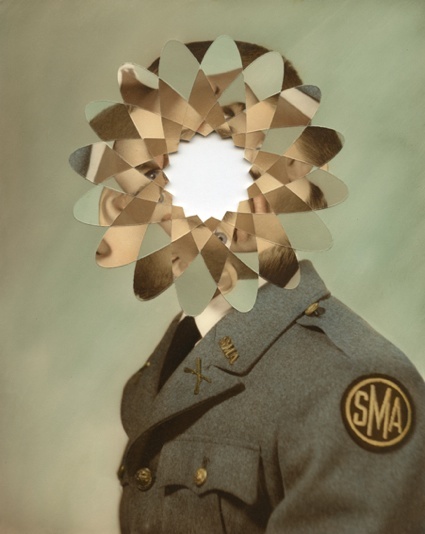 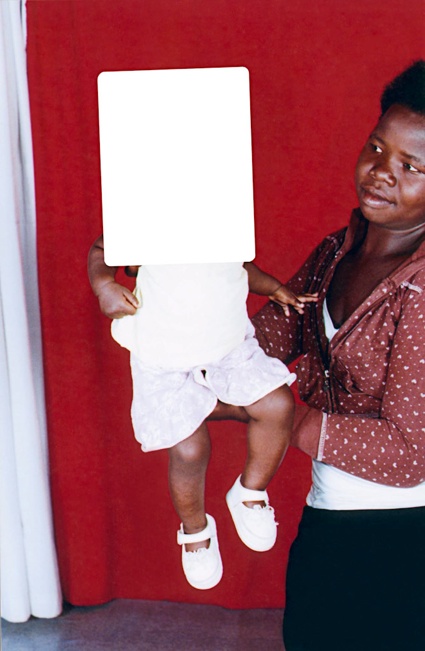 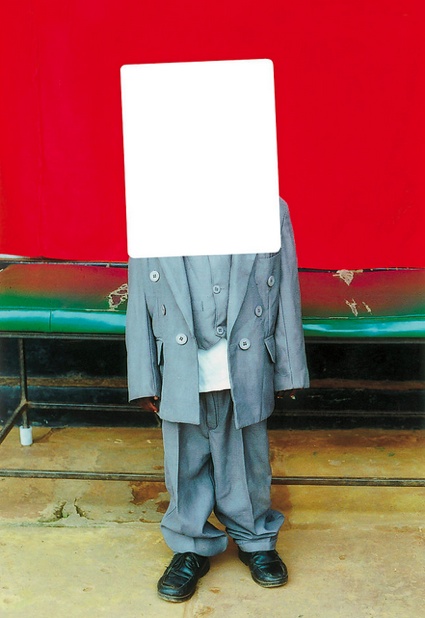 While working in Northern Uganda, Martina Bacigalupo stopped into a photo studio to get a few shots developed. There, she noticed a standard size portrait in which the face had been cut out. The owner of the studio explained that the missing part had been used for an ID photo. When customers needed an ID head shot, he would just make a standard size portrait print from which he would stamp out the ID portrait. Bacigalupo collected all the discarded headless prints she could from the cutting room floor and created a faceless but very moving portrayal of a society which has lived through violent conflicts over several decades.

Because many people don’t own a suit but want to look smart in their photograph, the studio has one suit jacket anyone can borrow even though it might not be their size. 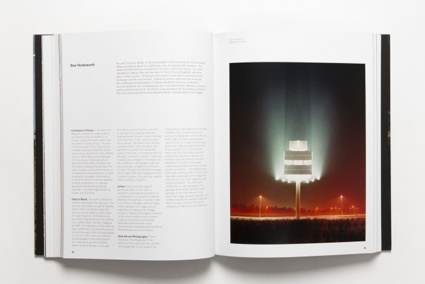 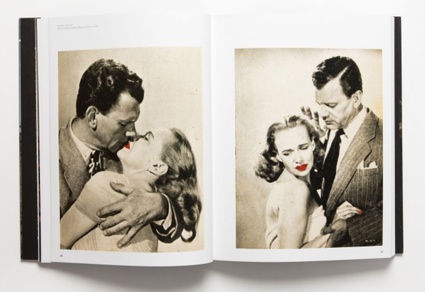 Photo on the homepage: Nicole Belle, Untitled from Rev Sanchez, 2008.