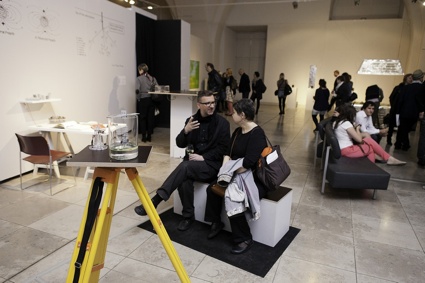 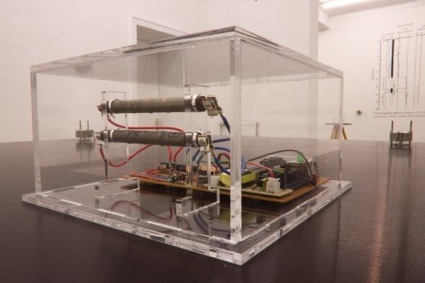 Yet another work i discovered in Riga when i visited Fields – patterns of social, scientific, and technological transformations, an exciting exhibition featuring artworks that challenge existing viewpoints, deconstructs social issues, and proposes positive visions for the future.

POLSPRUNG, by Erich Berger, explores the psychology and politics of disaster. The installation focuses on geomagnetic reversal, a change in Earth’s magnetic field that makes poles switch ends with the magnetic north pole becoming south, and vice versa. Scientists believe that the reversal is cyclically and some have even calculated that the moment is long overdue.

Starting from (im)possible disasters during a polar reversal, an attempt is made to generally ask how we deal with threat scenarios and states of emergency. We are hereby especially interested in the role of mass media in the production of a permanent state of emergency, as well as the social function and the possible exploitation of disasters for personal, economic and political purposes.

The POLSPRUNG installation features a series of instruments that measure the earth’s magnetic field to detect a possible polar reversal, register the gamma radiation caused by the solar wind and compare the data with the speculative disastrous gamma radiation data during a polar reversal. A small reading space also provides information about polar reversal research and disaster speculation, a magnetite laboratory and a notebook in which visitors can write down their thoughts about disasters. 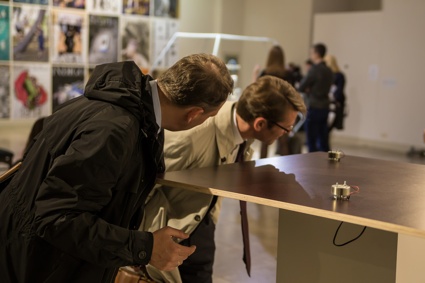 Interview with the artist:

Hi Erich! I’ve been looking online to understand the meaning of Polsprung and the more i googled, the more lost i felt: it is geomagnetic reversal and not pole shift, right?

In Polsprung I refer to the geomagnetic reversal, when magnetic north and south are reversing their position and earth its geomagnetic polarity. The German word for the geomagnetic reversal is POLSPRUNG and I use it because of “SPRUNG” – which means “jump” as substantive. A “jump” implies some form of time, something very short in our time experience. But a geomagnetic reversal has a duration of about 10.000 years – nothing we humans would consider a jump, it is only a jump considering geological time. I liked the idea of the jump which makes us think about different time scales. 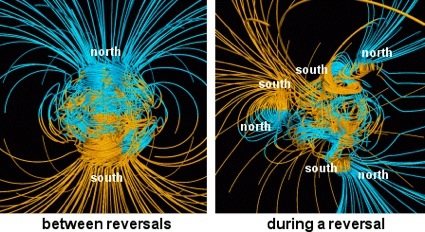 Appearance of magnetic field before and during a reversal (credit: Gary Glatzmaier/Los Alamos National Laboratory)

The other thing about frantically googling Polsprung is that it does look scary. Maybe worse than anything we might read about climate change (sorry for the link to that awful publication) Yet, it doesn’t get that much coverage in newspapers. How do you explain that? Is it because we cannot yet feel the effects of the Polsprung?

True, from time to time we hear about a possible catastrophic scenario related to the polar reversal, but maybe it is not so popular amongst journalists, as the concept is not so easy to sell. And there are less “esoteric” scenarios around. This was also the reason I picked it, because it is rarely used in talking about catastrophes. 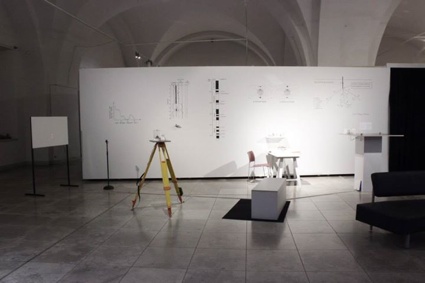 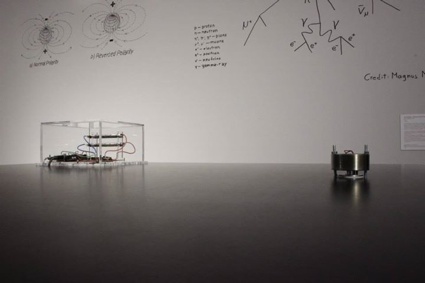 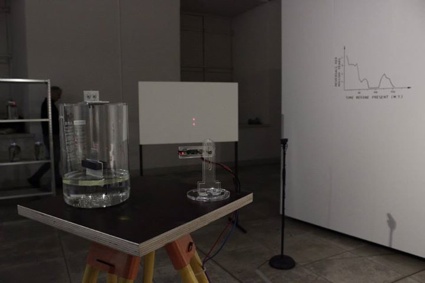 Could you tell us about the setting of the installation. It’s very techy, with instruments that look scientific. Yet, the work explores ‘the role of mass media in the production of a permanent state of emergency, as well as the social function and the possible exploitation of disasters for personal, economic and political purposes.’ So what is the role of the instruments if the works explore the psychological and political dimensions of a catastrophe?

A constant flow of states of emergency produced through media was the starting point for me to work on POLSPRUNG. In the last years I saw myself constantly bombarded with possible catastrophes, the swine flue, the bird flue, climate change, global warming, peak oil, an asteroid hitting, super solar storms, you name it. Some of these scenarios are just briefly in the media, some stay for some weeks and month others are permanently with us.

It is a really interesting phenomena when you observe it for a while. Most of these scenarios never play out, or were totally disproportionate or are predicted for a future we are not part of. What they have in common is that they create states of emergency which create fear, keep us occupied and make us worry about our current life, our loved ones and our future. States of emergency are also perfect for enforcing measures which we could call unpopular, so I am also interested in the politics of these states.

So I thought to create a test environment, a laboratory, a vehicle to explore such a case. I was looking for a possible scenario which would not be possibly created by human impact like climate change or random (act of god?) catastrophes like an asteroid collision. My interest in geology lead me to the geomagnetic reversal. If we look at the reversal statistics of the last 5 million years then the next reversal is long overdue – so I found my perfect state of emergency. Now, the speculations of possible catastrophes related to a polar reversal range from nothing to a complete mass extinction event. One quite probably effect could be an increase in gamma radiation on the ground leading to a higher rate of mutation in biological organisms but also to unwanted interaction with the electronic hardware. The electromagnetic spectrum was always of high interest to me in my artistic work and so I settled for the gamma radiation increase as possible catastrophe. With this as basic setting the installations manifests itself in 3 parts:

* Disastrous test arrangement # 1: Polar Reversal Detector
A magnetometer measures the earth’s magnetic field to detect a possible polar reversal and make the deviation of the pole from its “normal” position audible through sonification.

These two arrangements are self build but functioning instruments which permanently detect the fluctuations of the earth magnetic field (magnetometer) and the related gamma radiation (muon detector). With enough patience and time at hand (a couple of hundreds to thousand years) one can observe the reversal process and gamma ray increase – I call that radical witnessing.

Though the instruments are built quite simple and open they still remain black boxes for the visitor and make it difficult to completely understand the whole process. The detection really happens but people also need to believe in it and need to make them believe to actually be able to create the state of emergency. 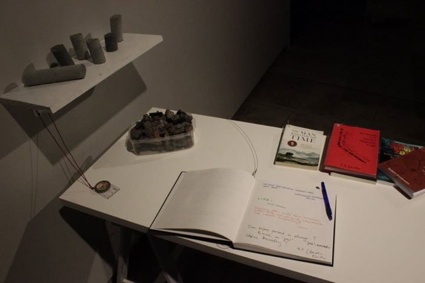 * Disastrous test arrangement # 3: Reading and Feedback
Includes information about polar reversal research and disaster speculation. The disaster notebook invites spectators to give personal feedback on their fear of disasters.

The third arrangement is central, as here fears and personal catastrophes of visitors and witnesses are collected. A black book on a writing table invites people to write down their stories and thoughts. The book collects the stories of the different exhibition venues. I haven’t seen the result from Riga yet, but in Hamburg, where POLSPRUNG was exhibited for the first time, people made intense use of it. At the same table you find literature to read regarding the polar reversal, the dynamic environment our earth represents when you look at it from a deep time perspective but also philosophy and ecology of geology and disaster sensationalism. For the more playful mind there is also a box where you can investigate and play with magnetic minerals. 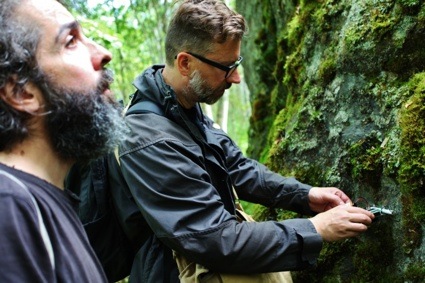 “POLSPRUNG is the first installation in a cycle of the works that deal with the psychology and politics of disaster.” Do you already know what the upcoming installations will be like?

I am currently working on the second work called INHERITANCE together with Finnish/Danish jewellery artist Mari Keto.

I already mentioned my interest in geology which specifically focuses on techno minerals, like uranium and thorium ores or rare earth elements, their origin, occurrences, mining, technologies and politics, etc. In one of my field trips quite close to my home I discovered native copper in the bedrock.

I knew this was exceptional and informed the geological research centre. To make a long story short, my sample also caught the attention of the researchers working for the Finnish nuclear waste industry. They saw the sample as physical evidence that copper is resistant enough as canister material for nuclear waste in Finnish bedrock. This was a rather unforeseen and unfortunate outcome of my activities and the only sensible way for me to respond was to start to engage with the topic.

Finland currently builds the first permanent nuclear waster storage facility called Onkalo. There is a quite interesting film by Danish film maker Michael Madsen which I can recommend, called INTO ETERNITY which explores the facility and the people working around it. Also last year I participated in the excellent nuclear field lab Case Pyhäjoki organised by Mari Keski-Korsu which engaged with Finnish nuclear politics from an art and activism viewpoint. Anyway, nuclear processes are vast in time but also in their spacial and economical dimensions, and as such really difficult to grasp. I was thinking of ways how to make them more comprehensive and now we are working on sets of family jewellery which are rendered unwearable through their radionuclide content for quite a long time.

Another off-spin of this workings is the Curie’s Children [glow boys, radon daughters] workshop which I developed together with Martin Howse.

This is the last weekend to discover the Fields exhibition, produced by RIXC and curated by Raitis Smits, Rasa Smite and Armin Medosch. The show remains open at Arsenals Exhibition Hall of the Latvian National Arts Museum (LNAM) in Riga until August 3, 2014.

Other posts about the Fields exhibition: Sketches for an Earth Computer, Ghostradio, the device that produces real random numbers, On the interplay between a snail and an algorithm and FIELDS, positive visions for the future.