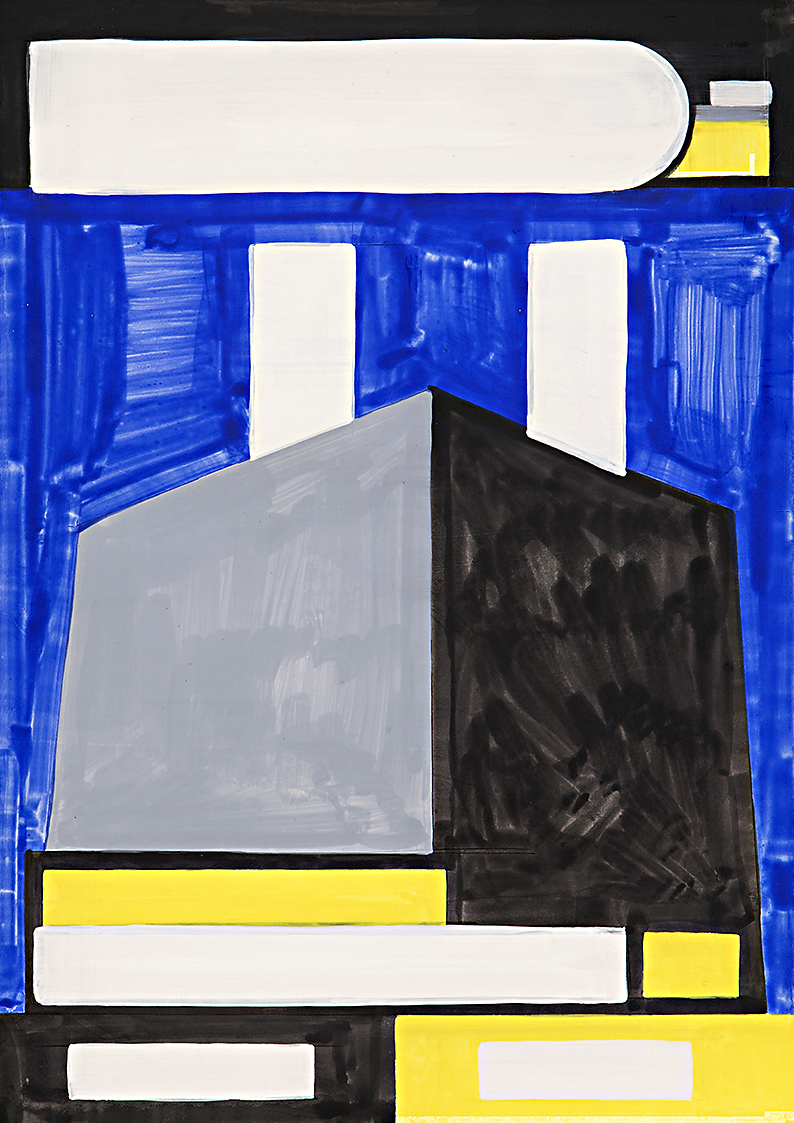 Very few of us would have heard of Dabiq, a town of over 3000 inhabitants in northern Syria, were it not for the magazine of the same name published by Islamic State (Isis) as part of its propaganda and recruitment arsenal. The town was symbolically crucial for Isis because of a prophecy that it would one day be scene of the final victory of Muslims over non-believers. Last year, ISIS was driven out of the town by the Turkish military and Syrian rebels. The online magazine is now called Rumiyah, the Arabic word for Rome and a reference to an Islamic prophecy about the conquest of Rome.

Navine G. Khan-Dossos‘ painting series Expanding and Remaining is looking at the Dabiq magazine under a whole new perspective. Eschewing the indoctrinating articles and apocalyptic illustrations, the artist stripped back the pages of their content and laid bare the main graphic composition of its layout. The pages of the english-language PDF magazine are turned into a series of geometric panel paintings (and also turned back into a PDF format.) The colours are flat, the strokes of gouache are bold and the imprecise forms are miles away from the glossy pixelated images that characterize on-screen and printed material. All that survives from the textual content of the magazine are the titles of the paintings, each of them drawn from the magazine articles. Some innocuous, other more sinister: Demolishing The Grave of the Girl, Foreword, The Hadd of Stoning, Erasing The Legacy of a Ruined Nation II, The New Coins, etc. 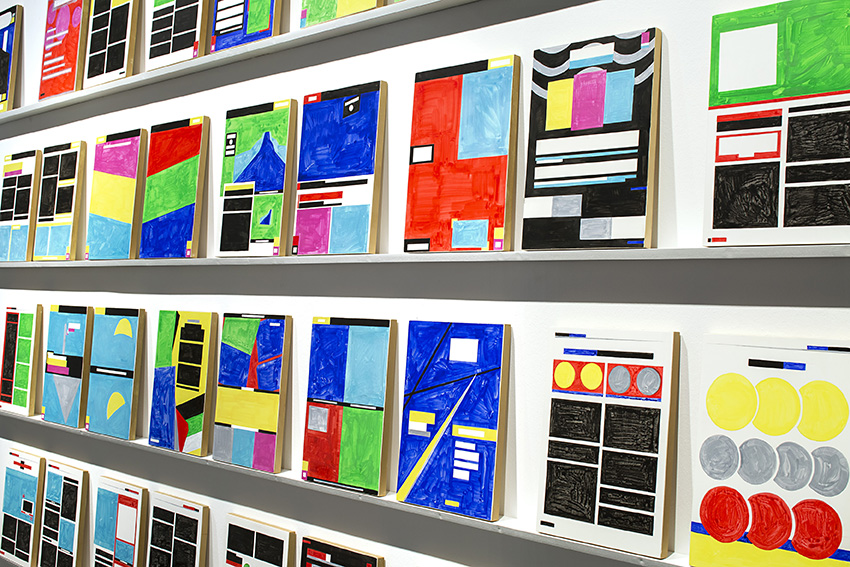 The effect of the transformation process is surprising: a sense of familiarity with the structure arises, you start seeing the edges, the imperfections and the human touch.

Several of Khan-Dossos‘s Expanding and Remaining paintings are currently on view at the Fridman gallery in New York as part of Evidentiary Realism, an exhibition that attempts to articulate a particular form of realism in art that portrays and reveals evidence from complex social systems, with prioritizing formal aspects of visual language and mediums. 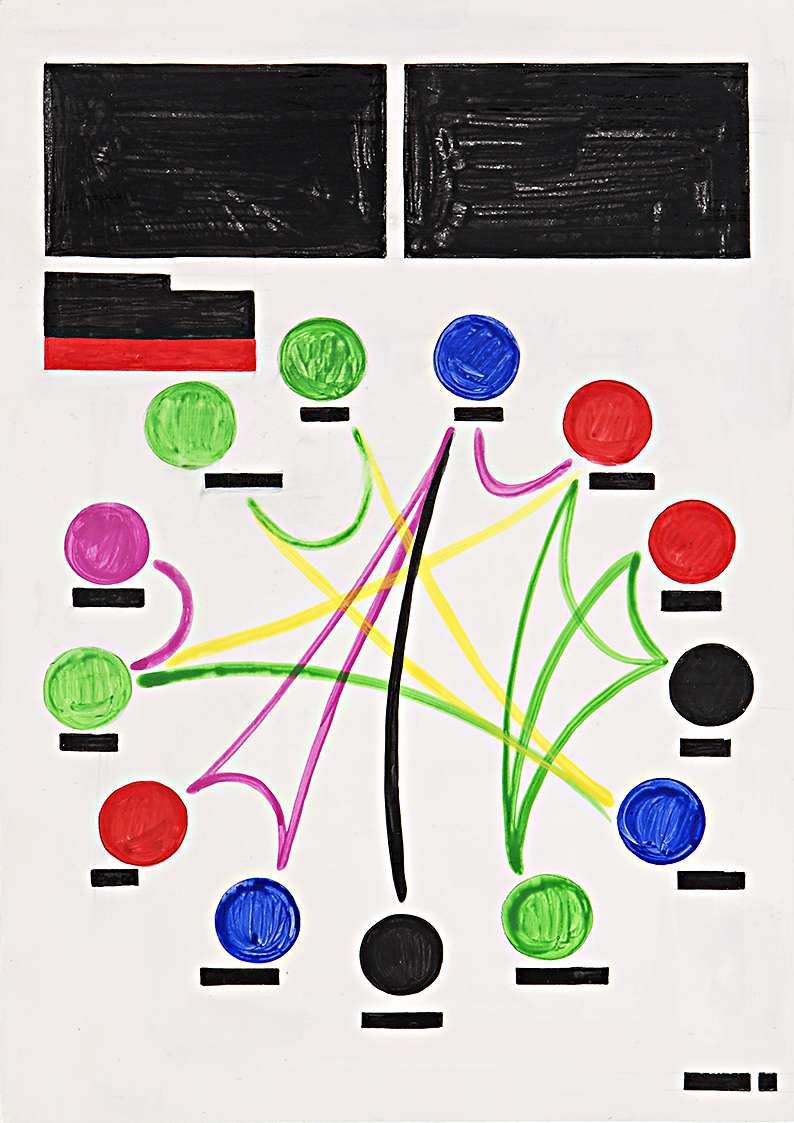 Hi Navine!Could you take us through process of obfuscating the text and revealing the underlaying visual propaganda of a magazine page like Dabiq?

I spend some time with the magazine, leafing through the pages (digitally), trying to concentrate on the layouts, where the text columns lie, where the images are placed. I tend not to read the content if I can. I used to, but I found it clouded the process of analyzing the designs. I then pull the original PDF into Photoshop and create shapes of colour over the content, to preserve the composition but lose the details. It’s the first step in the process of abstraction of the subject and towards painting. As you say, there is a process of obfuscation involved but not of censorship. The blacking out isn’t a means of muting the voice of the author of Dabiq, but to raise the volume of the designer.

How do you chose the pages you are going to intervene on? How do you select the colours, etc?

The process is intuitive as well as informative. I tend to be drawn towards pages with strong visual elements, such as graphs, strange layouts, photos with strong graphic elements, or other pages that catch my eye because of a peculiar design. I also pay attention to the subject of the article, especially if it reflects a story well know to a western audience, such as the continuing capture of John Cantlie, or the last words to camera of James Foley. These subjects are given a lot of space in the publication as it is aimed at a western readership and will know their stories from media coverage.

I work with a strict colour palette of Cyan, Magenta, Yellow, Black, Re, Green and Blue. These are the colours of print and the screen. By combining them, I try to find that grey area of the publication that is designed to be printed but only ever appears as a digital file. I then pick the closest colour to that I find on the page from my refined palette. Sometimes the combinations can be surprising and strangely revealing too. 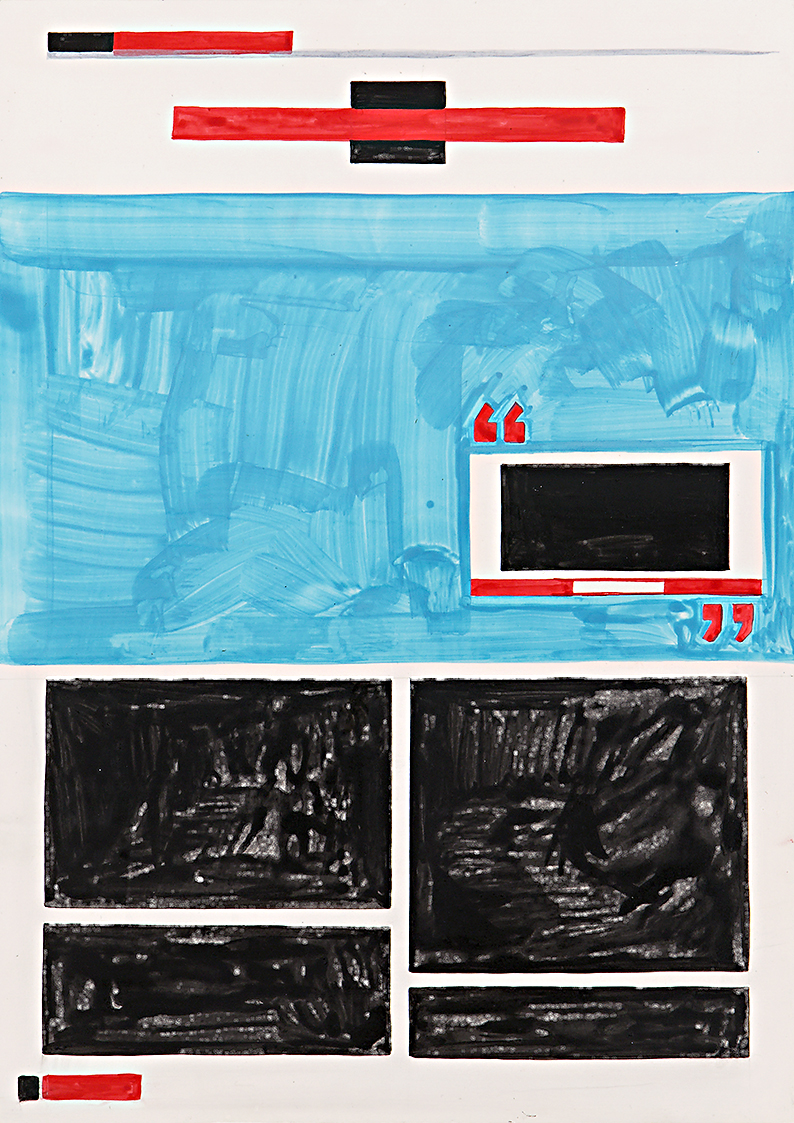 Navine G. Khan-Dossos, If I Were The US President Today (John Cantlie) I, 2016 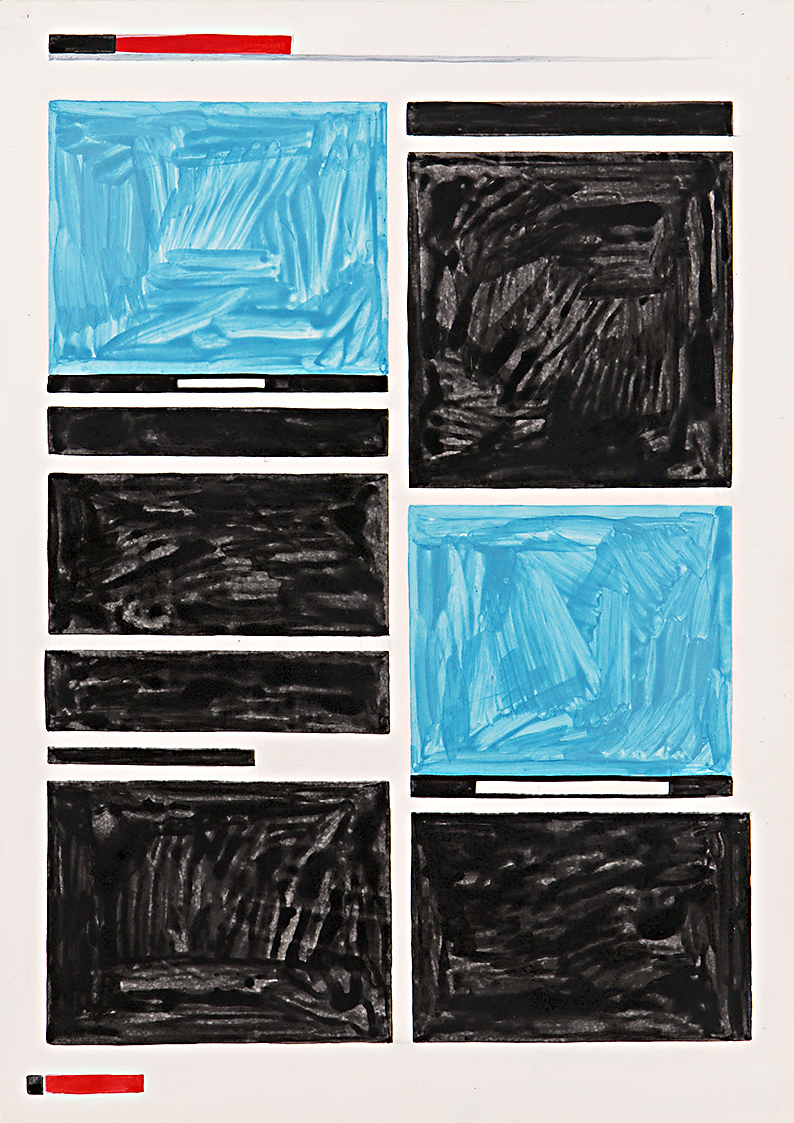 Navine G. Khan-Dossos, If I Were The US President Today (John Cantlie) II, 2016

How much does the result of your intervention strictly reflect what is already there and how much do add maybe, or change?

The aim of the work is to try to stay as true to the original layouts as possible. It’s a documentation as well as a painting in its own right. If I make changes, it tends to be in the colour rather than the composition. I like the journey that it takes me on if I consistently follow the lines drawn by the designer. It is like copying someone else’s hand. It challenges my senses to inhabit the work of someone else and try to translate that. If my authorship lies anywhere, it is in the language of the brushstrokes. 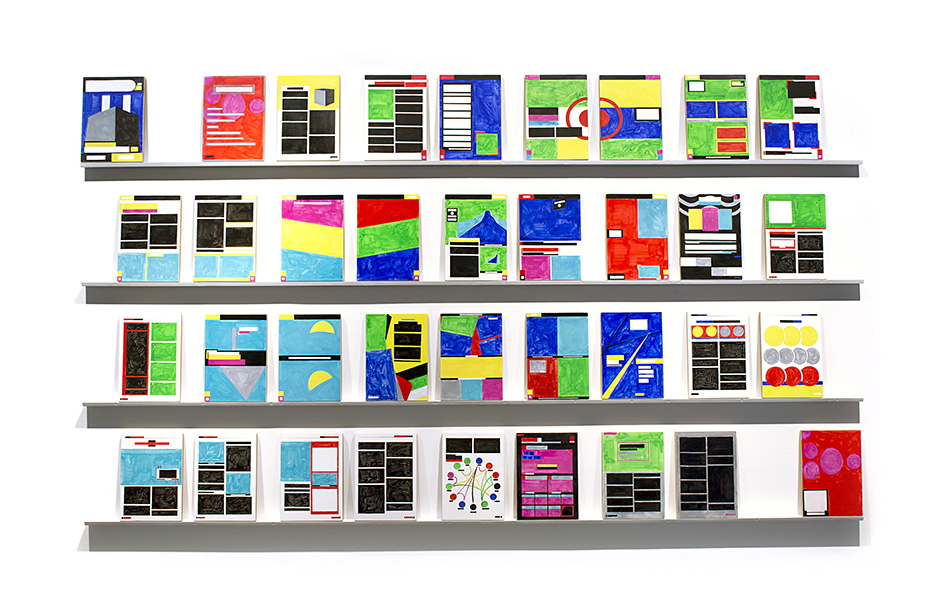 Navine G. Khan-Dossos, Remaining and Expanding, 2016. View in the exhibition Command: Print at NOME in Berin

I was looking at Dabiq on google images and some of the images saddened me. How did you approach the kind of content, either purely visual or textual, of Dabiq without feeling drawn into the propaganda? Without letting your artistic process be too influenced by the kind of emotional reaction the text and images may trigger?

It is a very saddening experience and also a shocking one too. I have been working with this material for a couple of years now, and it has been an ongoing process of how to manage my own personal relationship with these images. I refuse to perpetuate the content by reproducing it, which is why I concentrate on the form rather than the content. I have ways of looking at the magazines that lessen my contact with disturbing content, such as reducing the scale the PDFs so I can only see the basic forms, scrolling quickly through the issues, even sometimes blurring my vision to be able to focus on the compositions. But it is inevitable that I will see things I would rather not. But it’s part of the work, and the emotional response, the whole spectrum of feelings I go through, are part of that process. I let myself cry if I need to, be angry, confused, shocked. But I also recognize how alluring this content can be for some people and recognize that pull too. I’m not here to pass judgement, I’m here to find some way of understanding for myself, a politics and culture of violence that has been present throughout my time working as an artist since 2001. It has always been my subject.

How important are the titles of each piece? Are they mere reference to texts found in the original page or are they meant to suggest other messages and interpretations?

Each painting title is taken directly from the article title or keys words on the page. The title acts as a key to the painting. It’s there as a link to the original content, but I never suggest that it is required to dig deeper than the surface of the painting to better understand it. Everything that is necessary is there already. 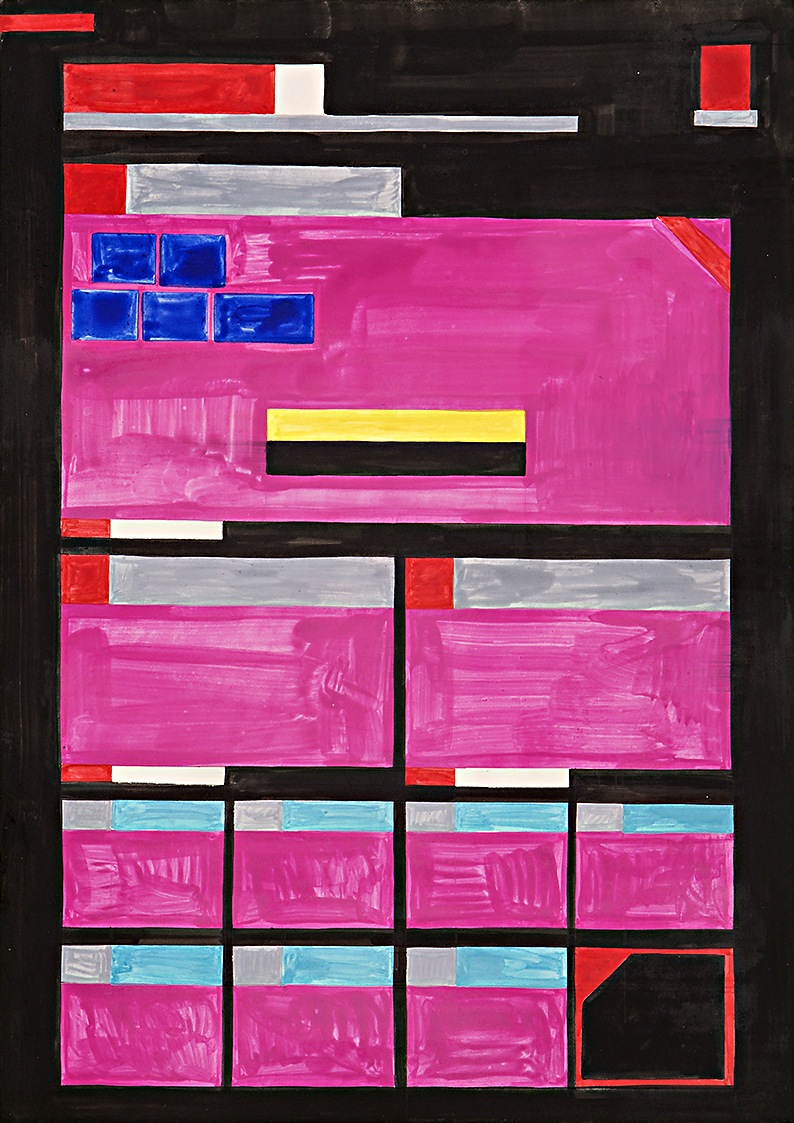 The result of your intervention on the pages is quite abstract. Which kind of meaning can the viewer extract from these works when they leave the exhibition?

I think the key to this question is the word ‘abstract’. I tend not to think of my work within this context especially in western art history. The works are absolutely based on visual references in the real world: they do not diverge from their subject matter. It is clear that the painting shows information, but that it has been rendered into blocks that retain the design but not the content. The paintings are about the nature of information itself.

What I found fascinating about the Expanding and Remaining series is that it provides us (the Western audience) with a very different, less visceral perhaps and more reflective way of looking at Isis propaganda. But do you feel that some of us might also be tempted to interpret and maybe also reduce everything as being inherently ‘political’ because of the ISIS topic, for example? Is this something that preoccupies you when it comes to communicating your work?

The work is inherently political, there is no way of side-stepping that and I wouldn’t want to. I think the issue is that painting isn’t often seen as a medium that can handle and communicate this kind of content and subject matter.

We are so used to digital content being the medium of this kind of research-based and investigative work. Painting is a tool that lets me take all of that research and transform it through an entirely different set of values; those of paint. It is not just a retelling or re-presenting of the material. It is a new form derived from that content, that exists independently of its origin.

It is less visceral, but that doesn’t make the experience of it necessarily less painful or uncomfortable. It’s just that it relies on the fact that the viewer knows what the content it already because they have been bombarded by it in the media. The politics of the work is already embedded in the mind of the viewer, with all its bias, fear and incomprehension. The paintings provide a space of recall, a place to realize how much we have already been exposed to. 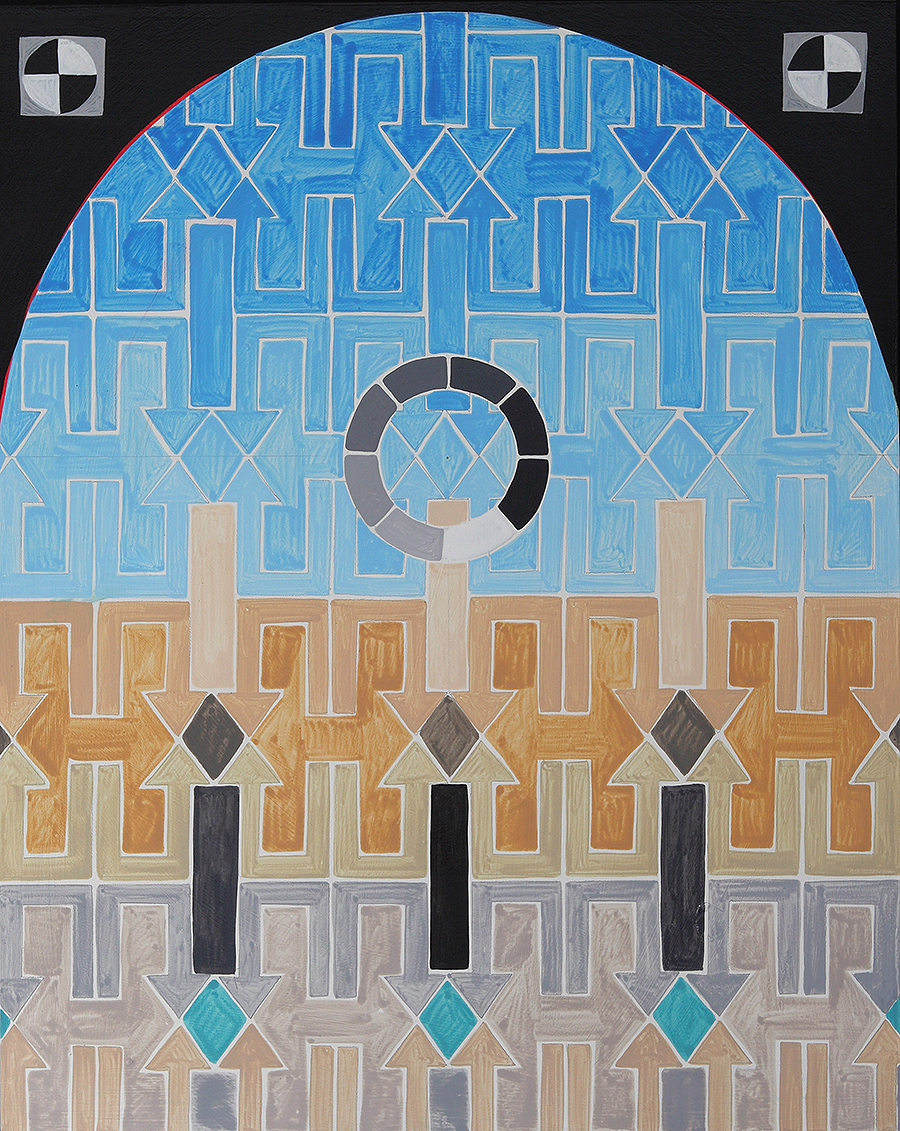 Navine G. Khan-Dossos, Yilmaz, Where Is Aïcha? (from the series Studies for Sterlina), 2015 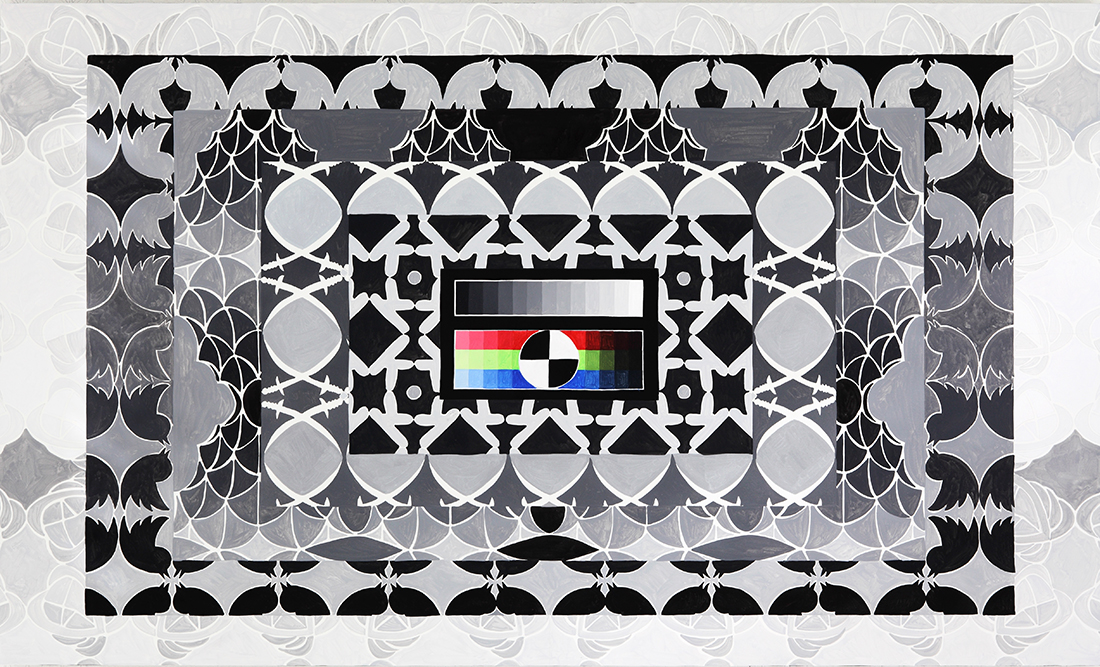 Navine G. Khan-Dossos, The Messenger and the Message (Recto), 2015 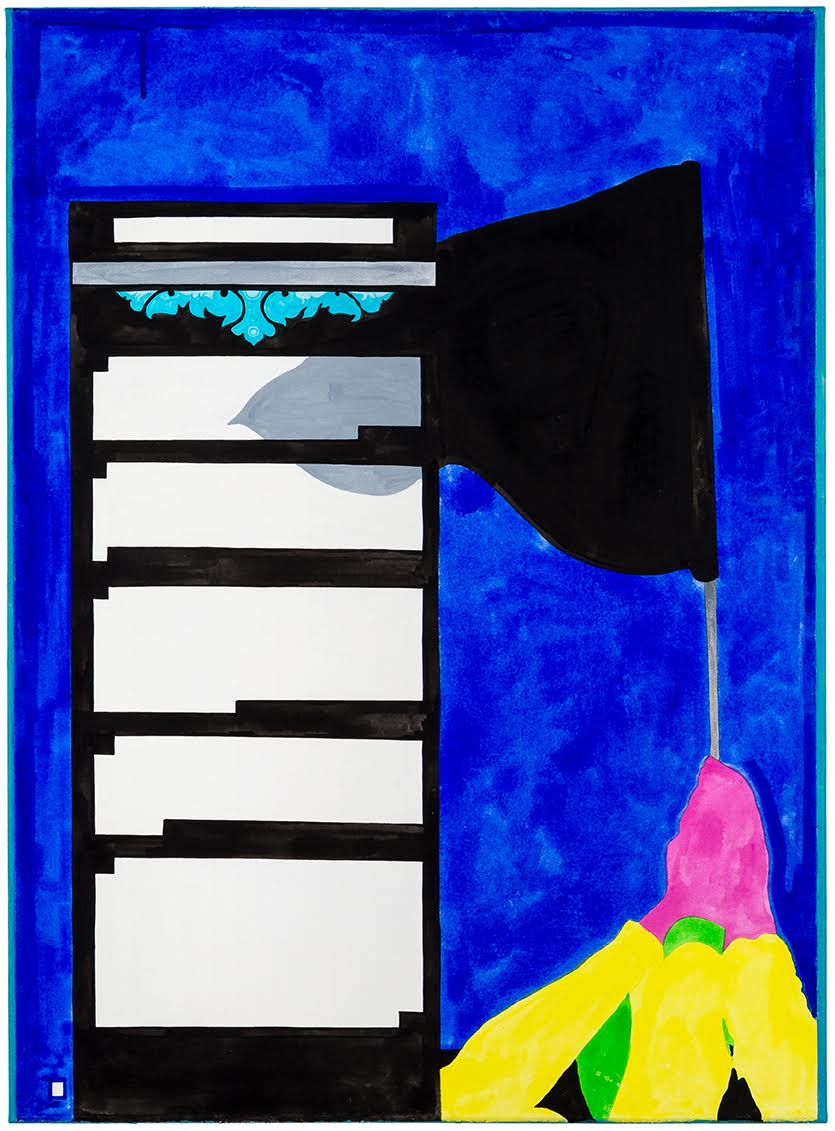 Navine G. Khan-Dossos, The Religion of Islam (from the series Infoesque), 2017

Any other upcoming work, field of research and concerns, or events you are currently working on?

As a follow-up to the work I am presenting as part of Evidentiary Realism, I will have a solo show at Fridman Gallery in April that will present the entire series of Expanding and Remaining, alongside a new series of twelve paintings called Infoesque. These new works are based on pages from Rumiyah magazine that has replaced Dabiq in recent months. The paintings focus more directly on the use of Islamic art motifs and data/statistical visualizations in the magazine, and seeing how these two forms fuse together to present an ‘authoritative’ visual language for the brand of ISIS at a time when it is undergoing heavy military losses.

I am also working on a large-scale wall painting project at the Van Abbemuseum in Eindhoven (NL) called Echo Chamber, that is based on Samantha Lewthwaite, the so-called White Widow currently in hiding in East Africa.

Several of Navine G Khan-Dossos’s Expanding and Remaining paintings are included in Evidentiary Realism, a group show curated by Paolo Cirio and presented by NOME Gallery + Fridman Gallery. The show is at the Fridman Gallery until 31 March, 2017.

Also part of Evidentiary Realism: Proceed at Your Own Risk. Tales of dystopian food & health industries.