We are getting increasingly comfortable with the idea of having a community of bacteria living inside and on our bodies. Health experts have convinced us that we need to care for the “friendly” bacteria in our gut while the beauty industry sells probiotics-infused mists and potions that will maintain our skin “balanced”. But how do we feel about bacteria when they do not belong to our own microbiome? About the other microorganisms that are within and around us at all times? Other people’s bacteria, for example? Or the viruses, parasites and fungi that inhabit us? 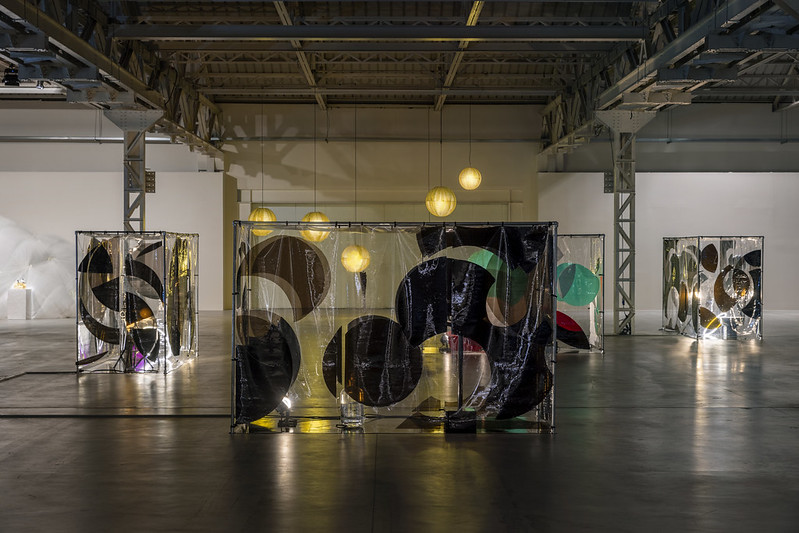 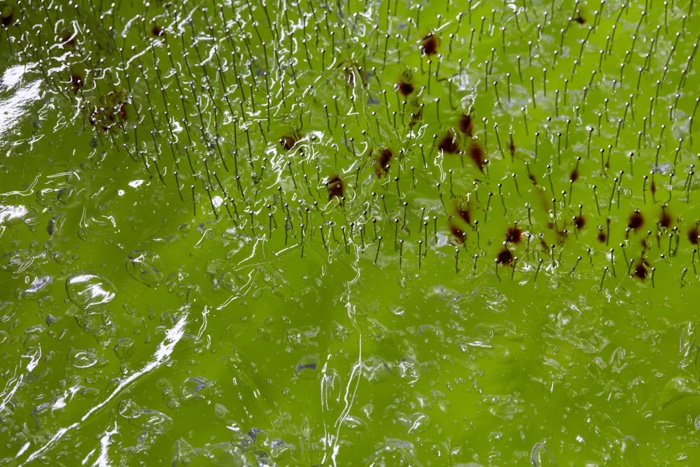 In her new show at Pirelli HangarBicocca in Milan, Anicka Yi subverts the white, hygienic and temperature-controlled space of the art gallery by filling it with bacteria, metabolic processes and works that ferment, foam, mould and perish. And if many of them smell, it’s not only because they are brimming with life but also because smell -a sense that art tends to overlook- makes us face our assumptions about gender, race and hygiene. That is what the artist calls the “biopolitics of the senses,” a process that highlights how our associations with smell -along with sight- breed prejudices and anxieties.

In her work, the artist uses microorganisms and olfactory experiences to challenge human exceptionalism and investigate themes as different as the co-existence of different organisms, nonhuman forms of intelligence, identity and societal violence.

As for the title of the Milan show, ANICKA YI. Metaspore, it is inspired by the biological world. Spores are cellular reproductive units, produced by certain fungi, plants and bacteria, that can give rise to a new individual without the need for sexual fusion. Often working with experts in fields as diverse as biology, AI and the perfume industry, the artist extends the concept of spores to the processes of proliferation and transformation that literally give life to her works. 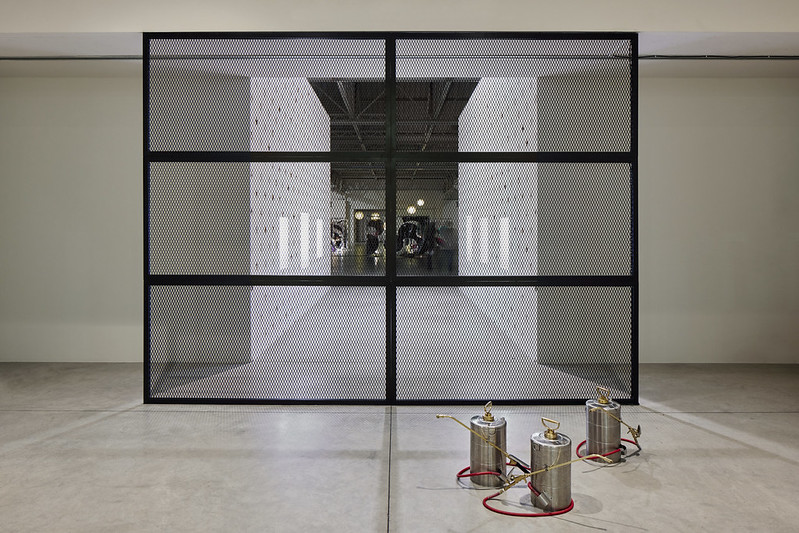 To enter the ANICKA YI. Metaspore exhibition, you have to walk by a metal mesh gate. On the ground, three steel tanks that look a bit like the cans used by pest management professionals are diffusing a barely detectable fragrance. The fragrance, created in collaboration with perfumer Barnabé Fillion, was obtained by blending the chemical compounds found in sweat samples collected from Manhattan’s Chinatown and Koreatown, with the emissions of carpenter ants, a species that is famous for being particularly hard to “control” once they are inside or near a home.

This pairing confronts visitors with stereotypes about an anonymous mass of Asian immigrants who work hard, cook smelly, suspicious food and live in impenetrable communities.

Immigrant Caucus suggests that smell can spark intolerance. Racism even. Smell does not respect the boundaries we establish for ourselves and our bodies. It can get tangled with ethnicity and class: Who works all day on their feet? Who can afford air conditioning and expensive perfumes? Who handles meat and fish? 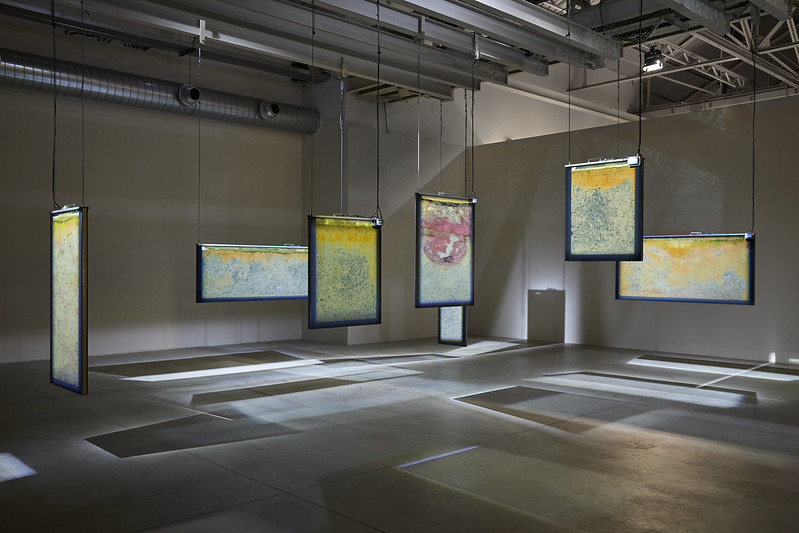 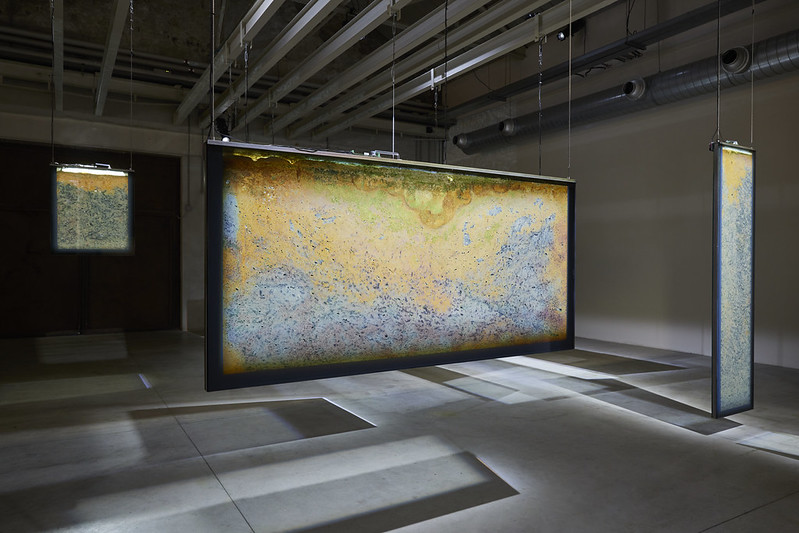 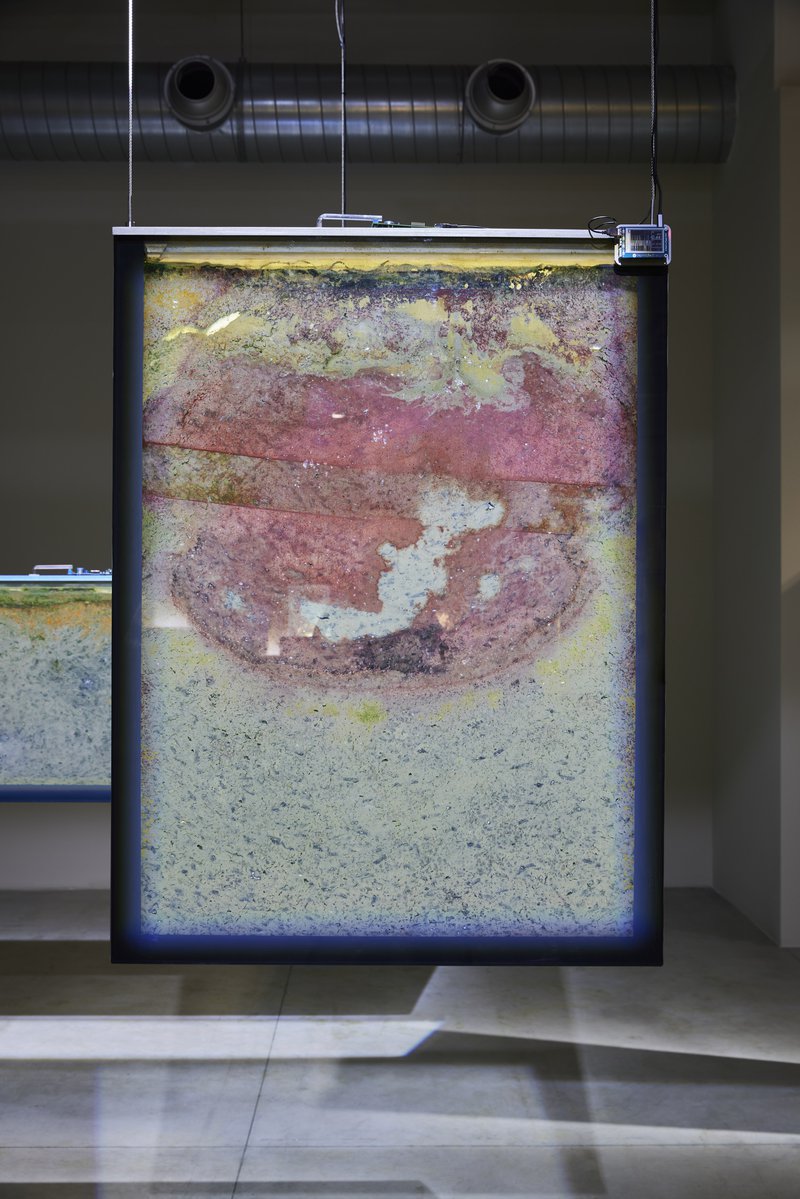 Made in collaboration with the Department of Earth and Environmental Sciences at the University of Milano-Bicocca, Biologizing the Machine (spillover zoonotica) features seven large display cases, suspended from the ceiling. Each houses a Winogradsky culture, an ecosystem of local soil, bacteria, cyanobacteria and algae. The light in the room influences the appearance and behaviour of the photosynthetic bacteria. Over time, visitors can witness their evolution. The organisms change colours, decay, grow and move around to create living landscape paintings or a new form of ultra-slow cinema.

The ecosystem activity is monitored electronically, suggesting perhaps a future where hybrid machines will be communicating and perhaps even collaborating with microscopic life forms. This co-existence of different non-human forms of intelligence might be thrilling but the word “spillover” in the title has dark undertones. It evokes the current pandemic and the uncontrollable effects of viruses transferring from animals to people. 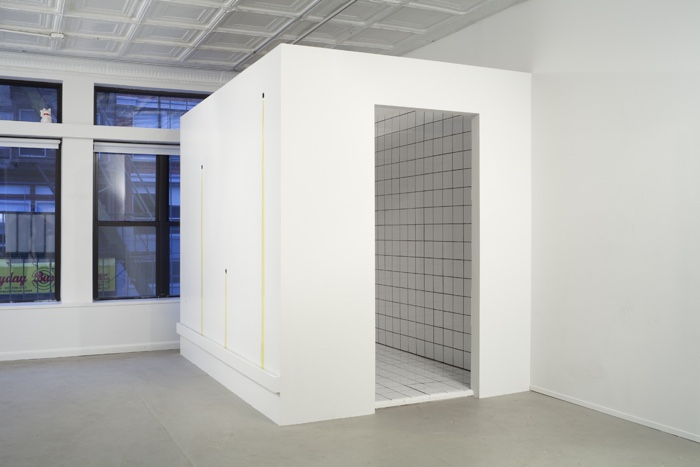 A small room, paved in the type of white tiles you can find in public bathrooms. A viscous, yellow liquid is leaking down of one of its walls. It’s not what everybody thinks. It’s olive oil and once you know it, you feel less queasy about that strange odour you detected as you approached the work. The connections you made between the sterile setting and the yellow liquid change and the public bathroom becomes a private kitchen or a culinary lab. It’s still sticky and a bit smelly but it feels less offensive. 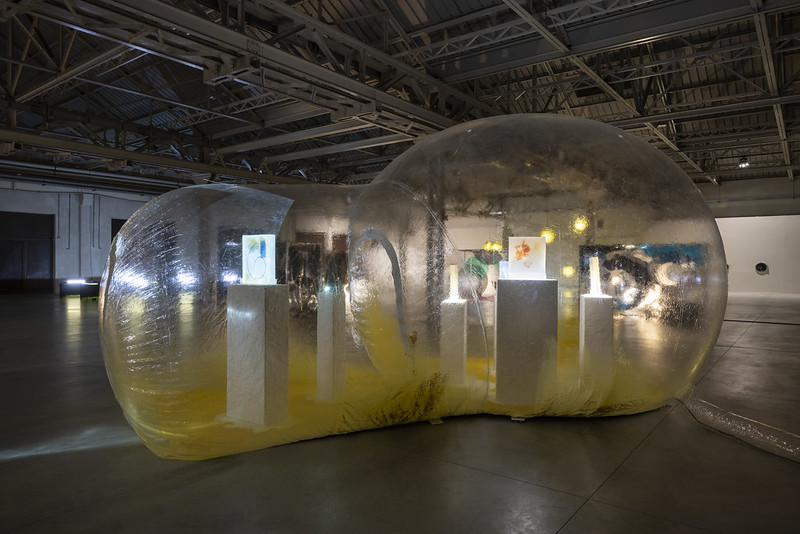 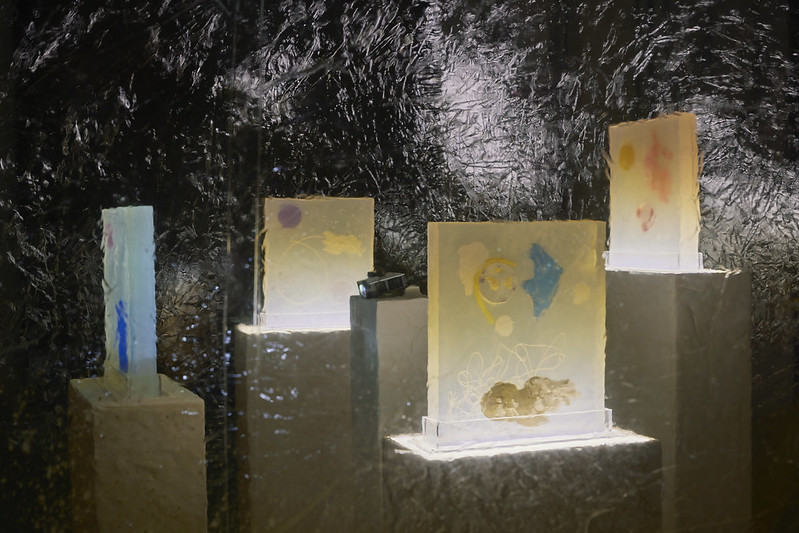 Le Pain Symbiotique (The Symbiotic Bread) is an inflatable PVC dome that hosts an ecosystem of organic elements and a series of artefacts. The floor is covered in bread dough and ochre pigment, while sculptures made of glycerin and resin sculptures occupy pedestals. Images of microorganisms in motion are projected onto them.

Visitors are not allowed to enter or go too close to the structure. Which might suggest that they are not needed. After all, it’s microorganisms, not humans, that are doing the heavy lifting in the bakery. Fancy sourdough bread exists mostly thanks to the work performed by invisible bacteria and yeast fungus.

Le Pain Symbiotique is like a synthetic gut: in constant motion, it ferments in the literal and allegorical sense. Maybe that’s why the structure is off-limits: to avoid the release of intestinal gases. 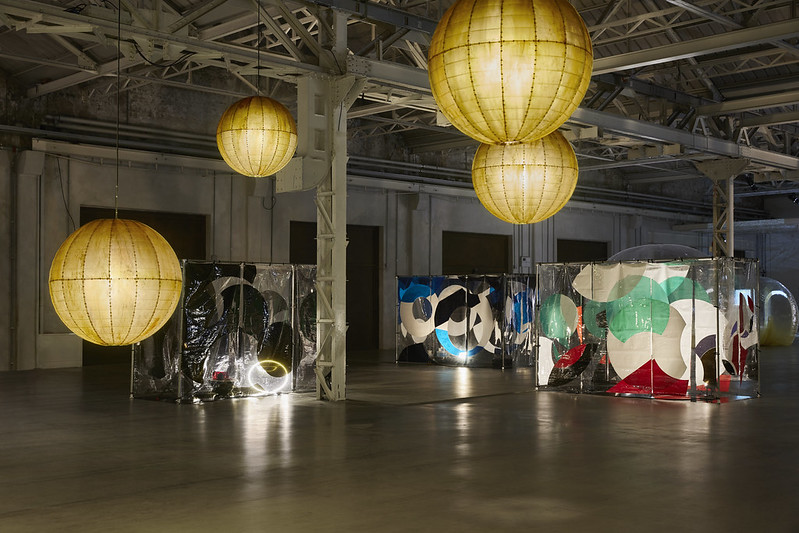 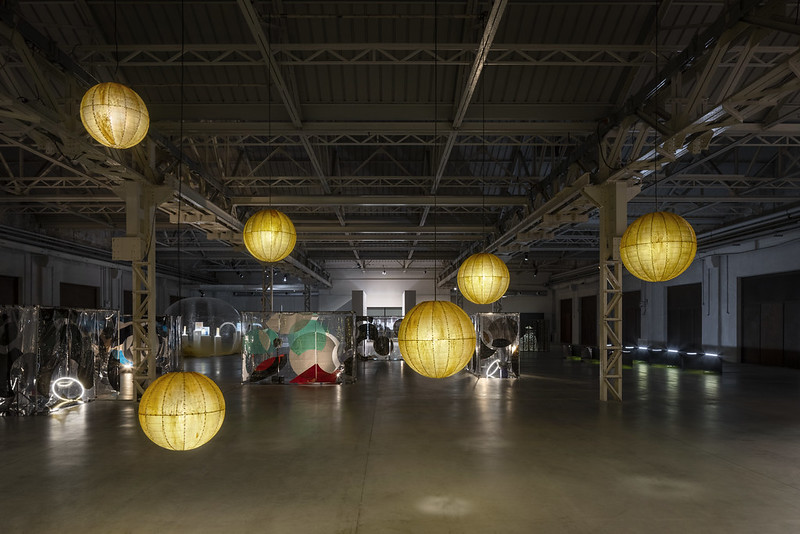 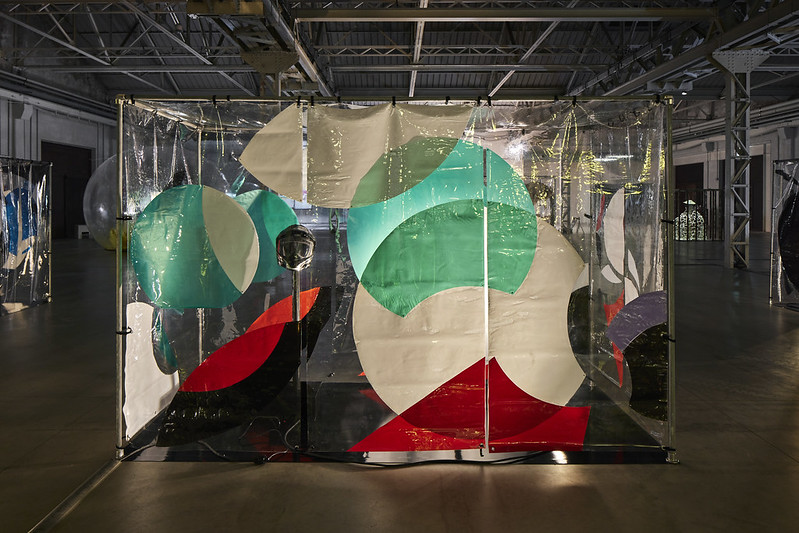