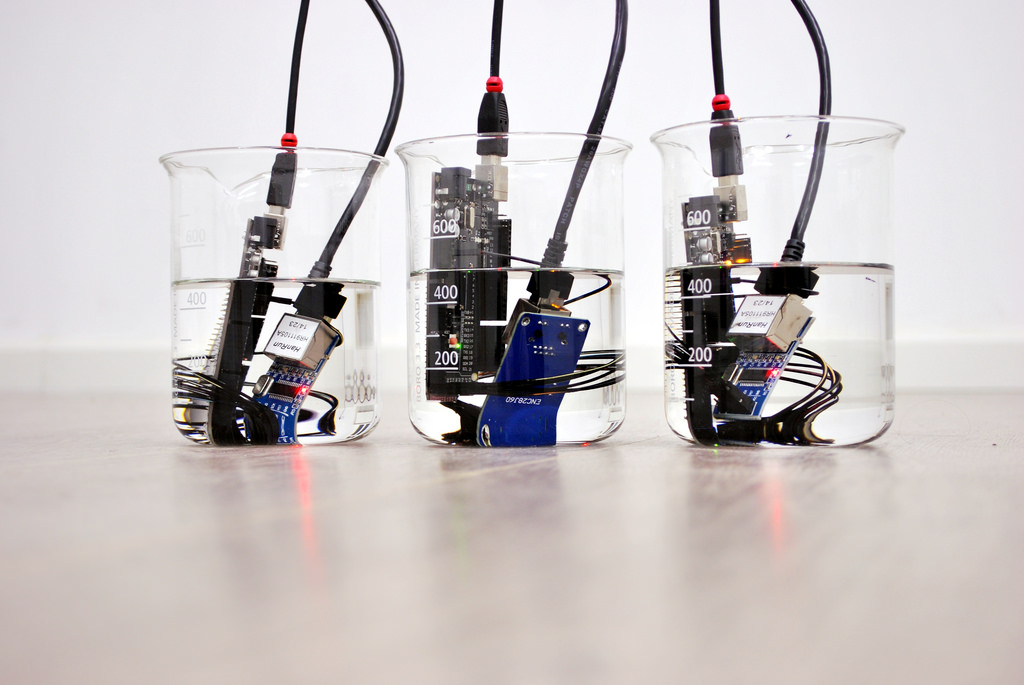 I discovered Martin Reiche‘s work a few months ago. I was visiting the art+bits festival organized by Medialab Katowice (the event was very good and i’ll post a review of it sooner rather than later) and i came upon a work, Drone Garden, where electric circuits were competing for bandwidth as if their lives depended on it. The idea was puzzling and thought-provoking. The aesthetic of the installation was simple and elegant. A few meters further was an interactive piece that was observing visitors and matched them in real-time with a profile on Facebook. Now that work was vexing, i felt offended when i saw who my social network alter-ego was supposed to be. But the work was witty and intelligent in the way it dealt with identity propagation. Plus, it was by the same artist as the Drone Garden. I had to get in touch with the artist…

Martin Reiche studied computer science at Karlsruhe Institute of Technology but then decided to change path and moved to the Karlsruhe University of Arts and Design to study media art with Michael Bielicky .

His work investigates issues as different from each other as perception, international power networks, religion, changes in the human condition through technology, surveillance and electronic and physical warfare. His book, Real Virtuality, explores how the virtual has seeped into every aspect of our life and shifts not only our understanding of the world but also the way we define ourselves. 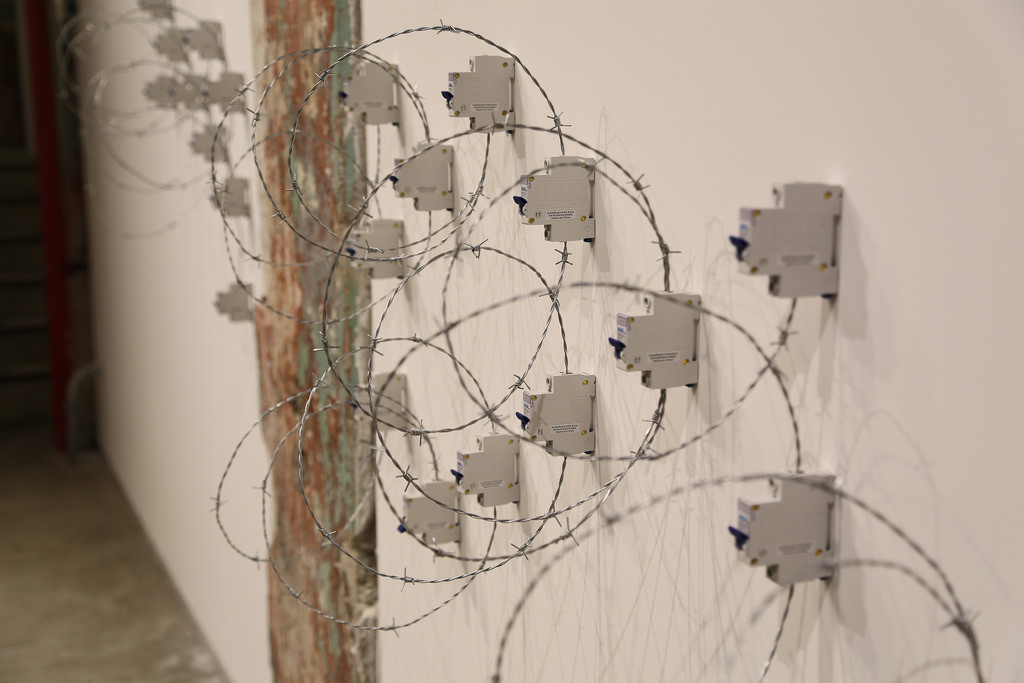 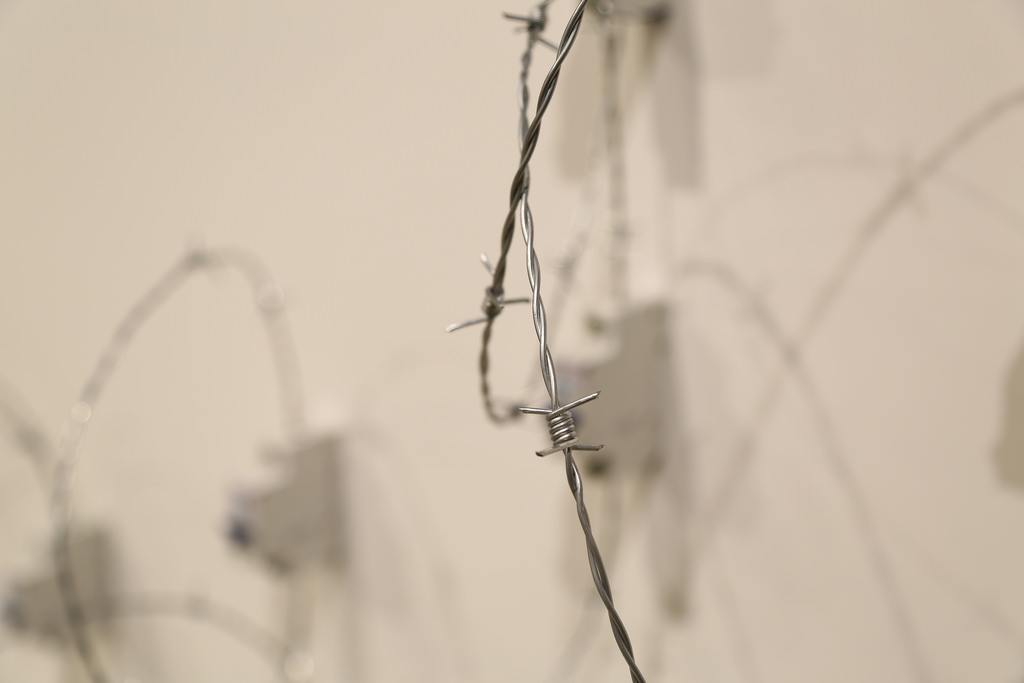 Hi Martin! I was watching a talk you gave for the OpenTechSchool and you explained that your background is actually in computer science but that at some point you decided that being a scientist wasn’t enough so you left the course and studied art instead. What is it about science and the way it is taught or presented nowadays that doesn’t satisfy you? And what do you find in art that you couldn’t find in science?

When I was studying computer science at an engineering university, what I saw in my direct community was the development that people went through while studying eg. linear algebra and stochastics for a good two years. They learned a tool to solve a problem, but the more they got aware of the potential of the tool they learnt, the more they saw everything as a problem that can be solved by this tool. It was like in the classic joke: If you only have a hammer, everything else becomes a nail. Personally, I wanted to take a step out of this and thus started to study media art, but this of course was just my personal strategy to diversify in order to get a better overview of things. Luckily, I stayed on that path and now integrate both my experience in media art as well as in mathematics and computer science into my artworks. 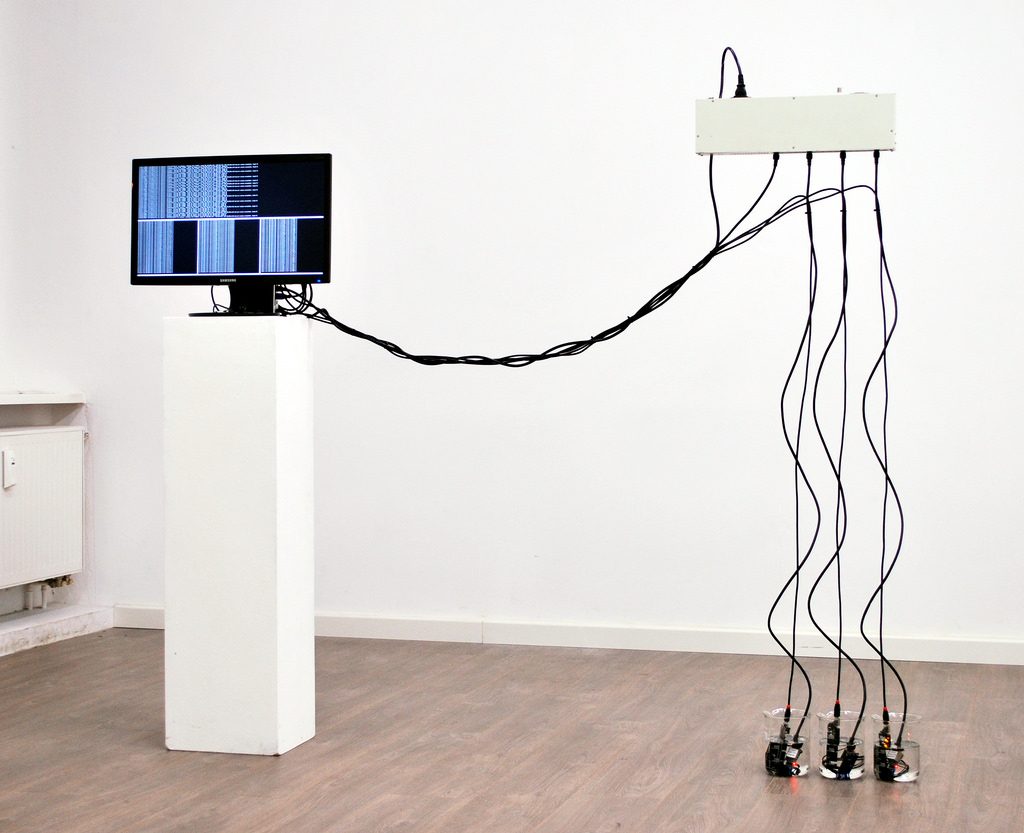 I really like the fact that you describe Drone Garden as being a “contemplative non-interactive installation.” I think that many art & tech shows would gain from inviting contemplation but maybe it’s just the lazy in me who’s speaking. What made you decide to call this work ‘contemplative’?

Contemplation is something very important for me personally and that in my opinion is underrepresented in ‘art and tech’ projects. In many of them, the technological part acquired an overly important role, and then sometimes the critical layer overshadows every other aspect of the work. Then again, a lot of works are mainly sensationalist. For me, the key is stripping the sensation out of the equation: It might make it less accessible in the first place, but it also adds the mystery of some untold part of the work. And sometimes, the work’s meaning becomes completely obsolete if you are just getting sucked into the contemplative space that the work radiates. 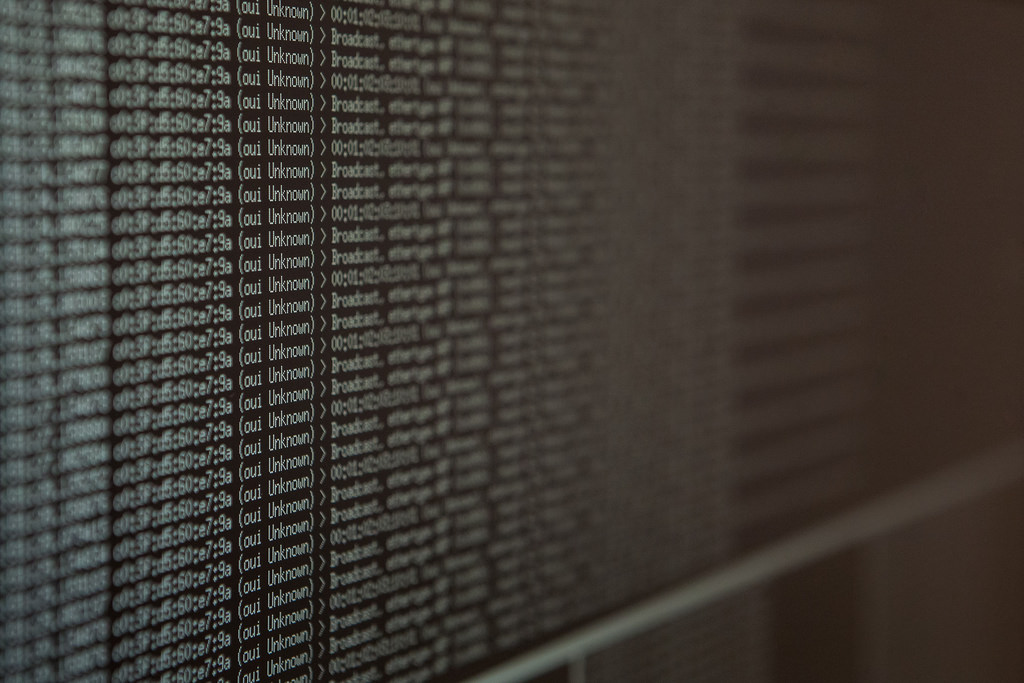 The description of the piece also refers to the organic world with terms such as ‘plants’, ‘garden’, ‘fight for its existence’. The micro controllers are also immersed into water. Why was it important to you to bring parallels with the organic world?

It was a design decision that came into being when I was creating the concept for the piece and I was reminded of plants in a greenhouse when I was sketching the microcontrollers hanging from the network hub, so it seemed natural to me to further work on this inherent visual parallel to the organic world. Even calling it a “garden” started at this point.

Also, I like the idea to re-naturalize technological artifacts, because they are finally so directly connected to our everyday life that we see them as a given, as something almost natural to us.

Now i’m also wondering how it works. Did you program microcontrollers with some forms of warfare strategies so that they will compete against each other?

Exactly. All three microcontrollers implement different and very common types of attacks against networked systems. One is flooding the network with unsolicited data, one is constantly trying to take over the identity of the other two microcontrollers, and the last one is just trying to crash the installation altogether by directly attacking the surveillance machine. So what you can see on the screen is the outcome of this “fight” on a network packet level. This would be what a network administrator of a company sees when he/she is trying to find out how an adversary broke into their system.

How much does this fight reflect what is happening every day in global communication network for example?

The hardware that you see in the installation is what is being used around the world still today to create the global networked communication system that we call the internet. Especially the protocols, ie. the basic rules on how to exchange impulses of electric current in an organized manner so that the other end can interpret it as data or the rules on how to gain and maintain free access to this network, they are still the same as 20 years ago. Despite all claims to make the internet safer and better and more secure, its best ideological feature is that every member can have access to it, can freely communicate and that we can all build a vast network of knowledge and sharing. Of course, this means taking risks, as every form of freedom implies. The risks are manifold: Break-ins into corporate networks by adversaries, identity theft, organized crime just to name a few. The methods to “protect” the network from these risks are as manifold: Network surveillance, de-anonymization, censorship.
In “Drone Garden”, the microcontrollers fight the same fight that every server and every workstation connected to the internet is fighting: it is a fight for bandwidth, for being allowed to be a member of the network, for not being censored.

I also like what i would call the ‘minimal aesthetics’ of the Drone Garden. But how important is the aesthetic aspect important in your works? Is this something you pay much attention to?

My whole body of work is paying much attention to detail, especially to visual and conceptual detail. In that line of thought, the visual aesthetics of a piece is absolutely critical to understand the piece in the manifold ways it is intended to be seen. Also, a minimal setup in an installation allows visitors to easily understand the full setup: Everything is just right in front of their eyes, connected to each other. Yet, what I am showing is not just the combination of these parts, but the essence of their assemblage. If you pair that with the indiscernable nature of software in the physical world, you get a work that is minimal yet complex, sculptural yet digital. 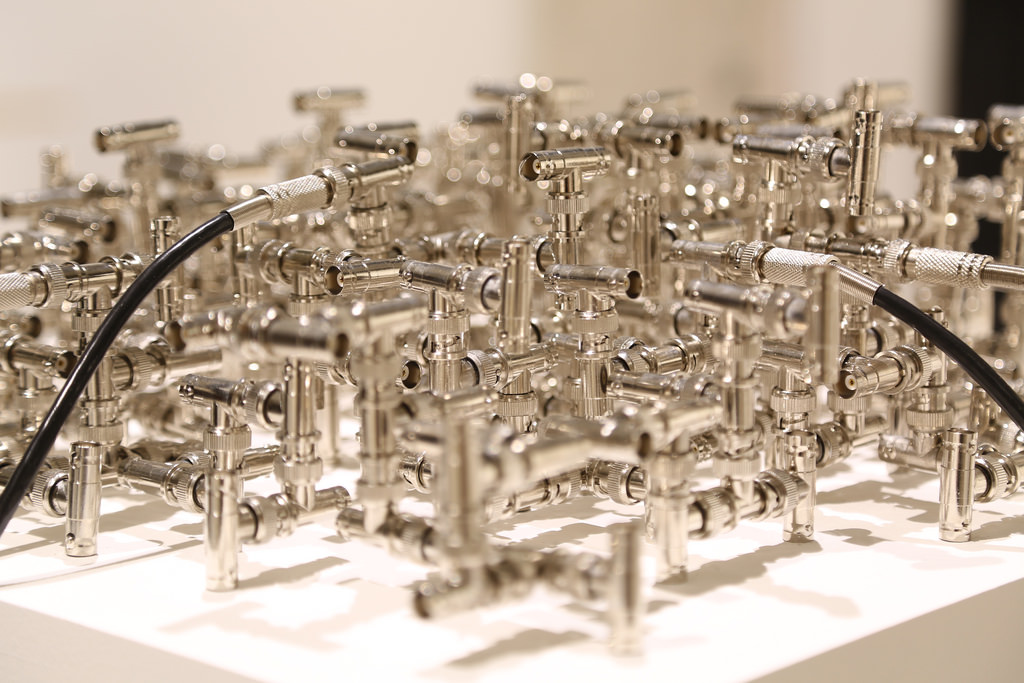 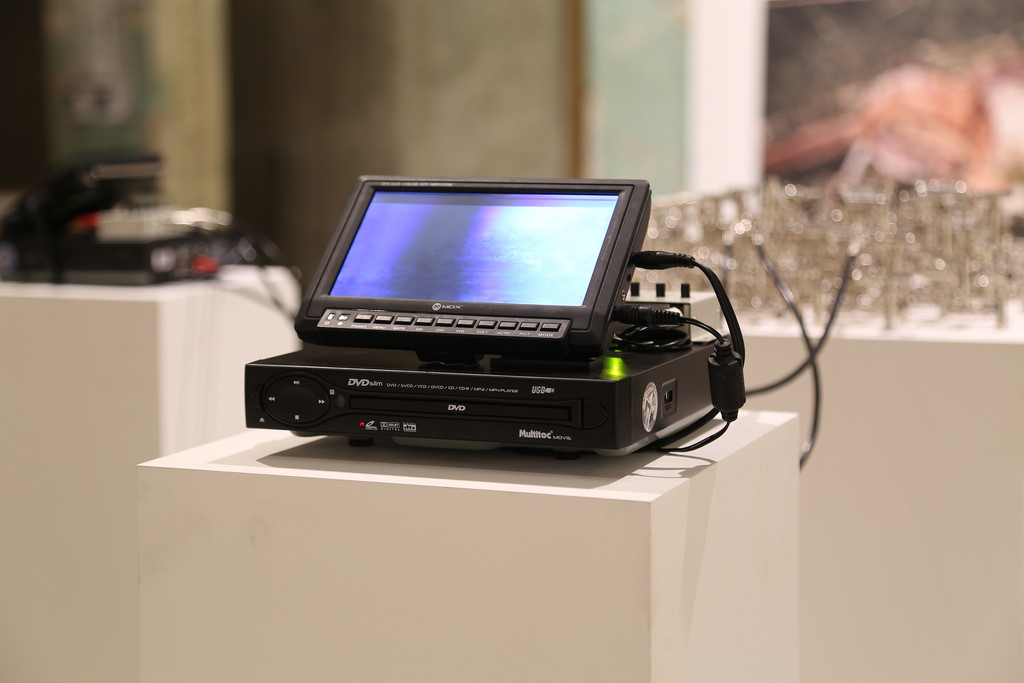 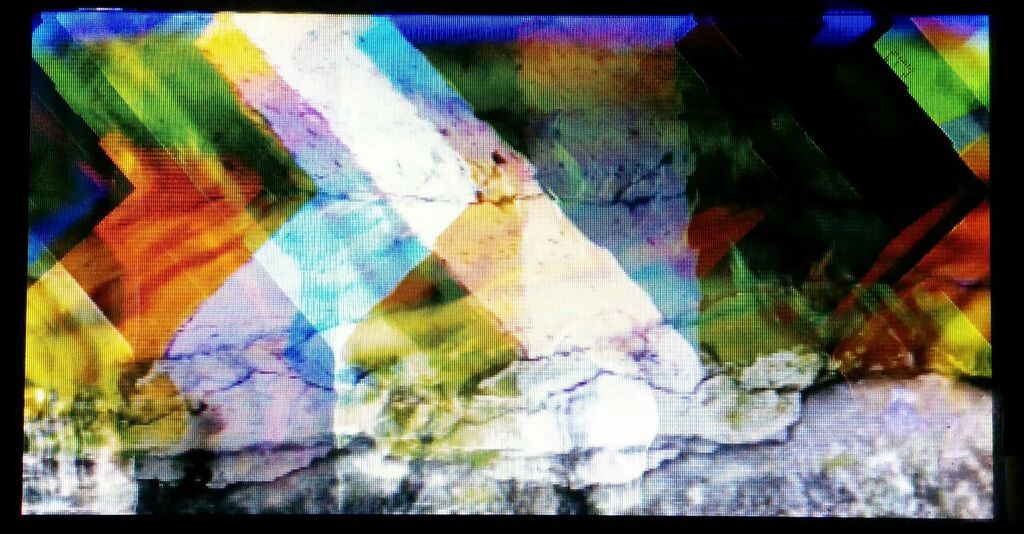 BNC B (example still of the video generated by the work)

BNC B is a stunning piece. However, i have to admit that the description is way way too techy for me. Could you dumb it down a bit and explain what is happening between the metallic structure and the video on the screen?

BNC B is, just like Drone Garden, a project that falls into what I call “post-digital sculpture”. The work explores the functionality of basic physical building blocks of our connected world, in this case coaxial cable connectors called Bayonet Neill-Concelman tee connectors. Using 400 of these T-shaped connectors I built a sculpture that not only strikes visually with its sharp 90 degree angles and minimalist style, but also still preserves its function: It is a huge network which is connected to two DVD players that run two abstract video works in an infinite loop. By sending the output of these DVD players into the sculpture, the videos are analogically mixed and then again displayed on two small TV screens. The resulting video is a colorful mixture of the two movies that lies somewhere between analog video art and glitch aesthetics. 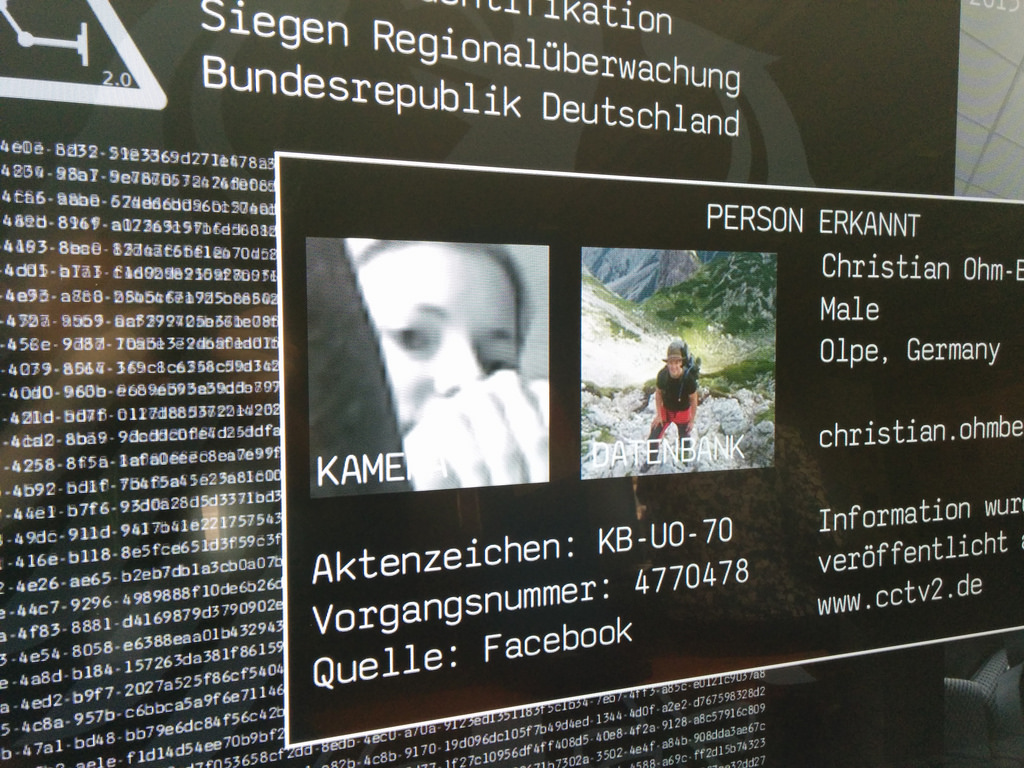 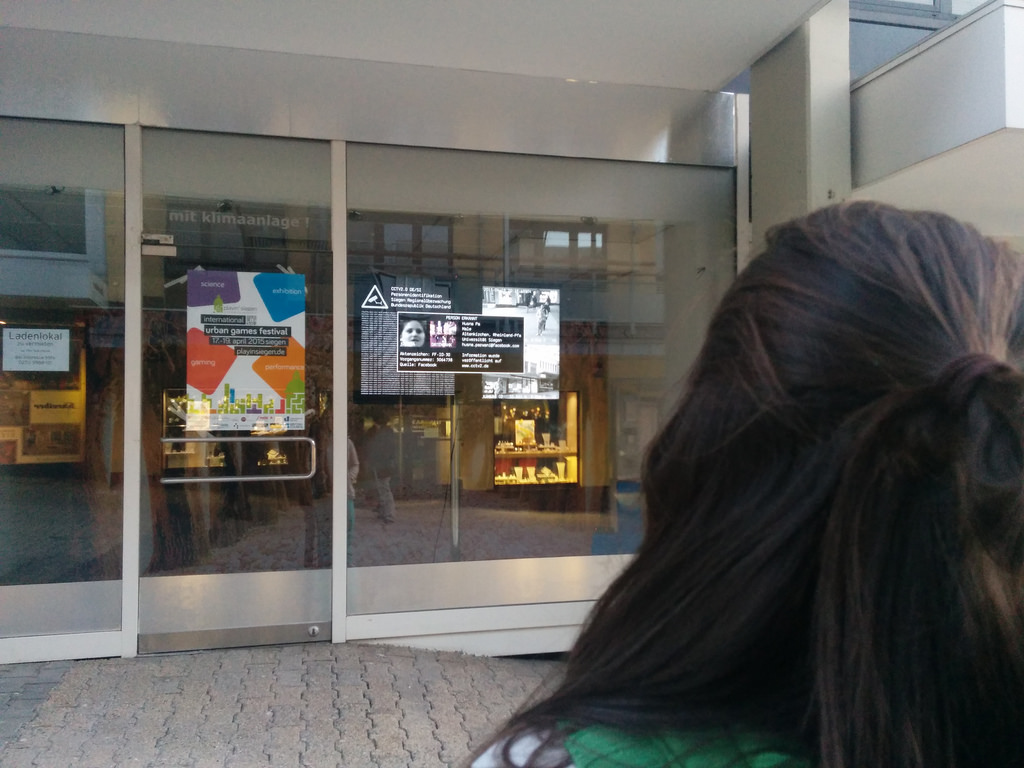 Who are the artists or scientists whose work and ideas inspire you the most?

Definitely Carsten Nicolai, Marina Abramovic, Daan Roosegaarde and Buckminster Fuller, and all the other great thinkers that just don’t come to my mind right now.

You co-founded the Subformat Research Group. Again, that’s a pretty interesting name. What is the group researching exactly?

It is a small but international extra-universitarian research group that started in Karlsruhe back in 2012. A couple of people including me were discussing on how a digitization of our world leads to formatization of perceptible space, eg. how we change our understanding of space through the usage of specific forms of digital technology (such as smart phones). We figured that we need a name for that group, something that could serve as the umbrella for a lot of streams of research on digital anthropology. 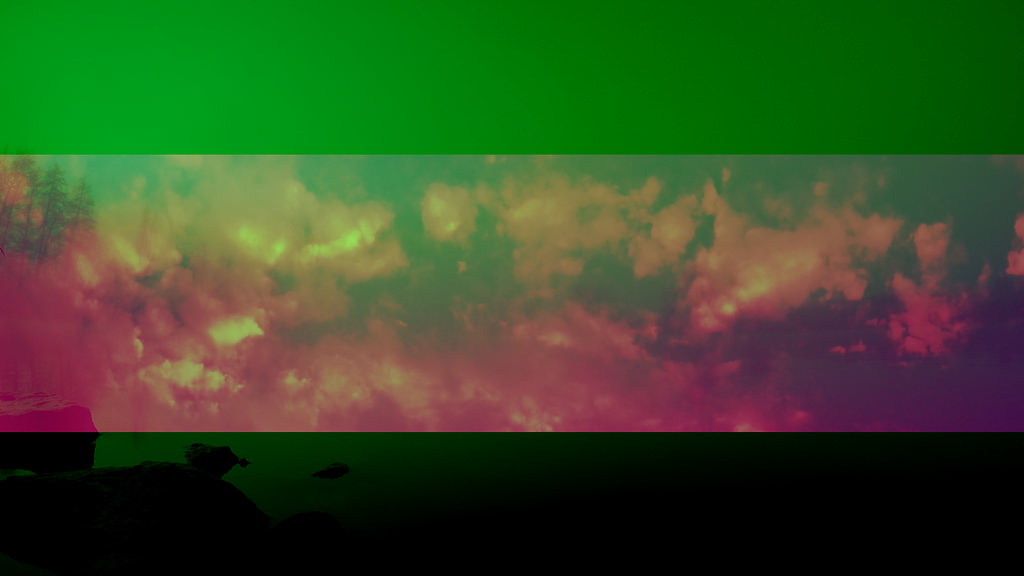 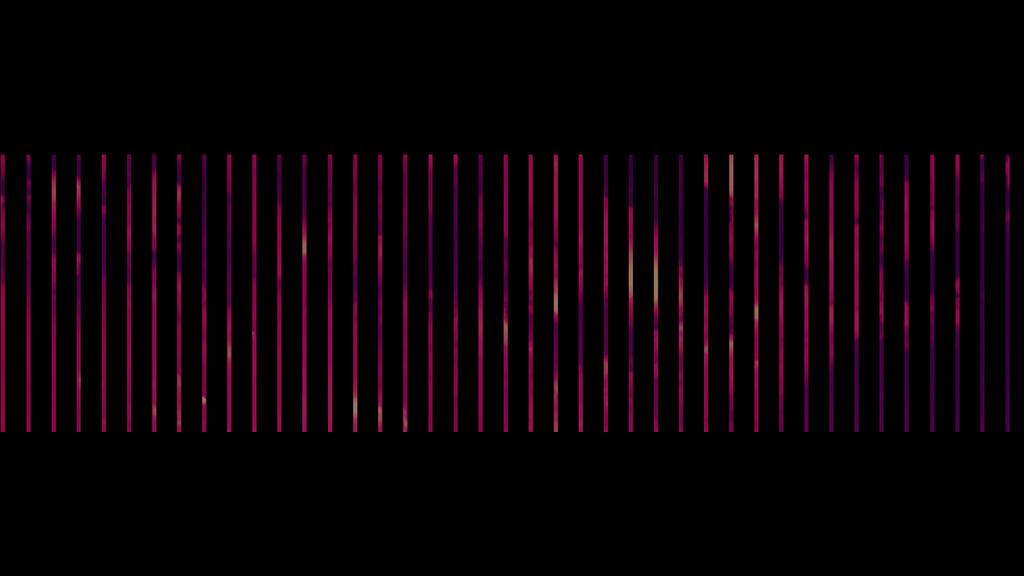 Yes! I am very happy to show BNC B for the first time on the European continent this month (23-28 February 2016) in Madrid at the JUSTMAD art fair. Also, I am currently working on an editioned giclee print series that will be for sale around May this year – so stay tuned!