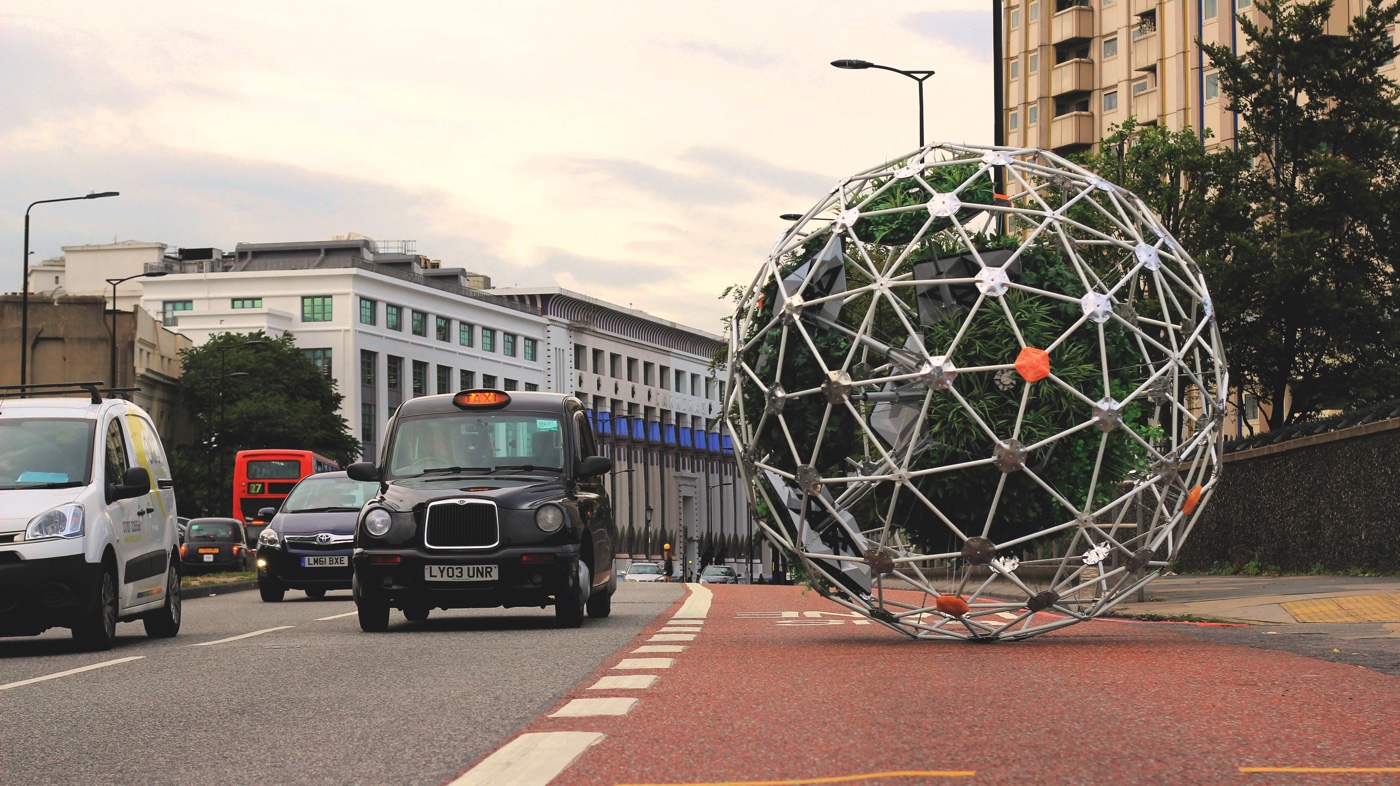 Hortum Machina, B on Hampstead Road in London. Photo by William Victor Camilleri 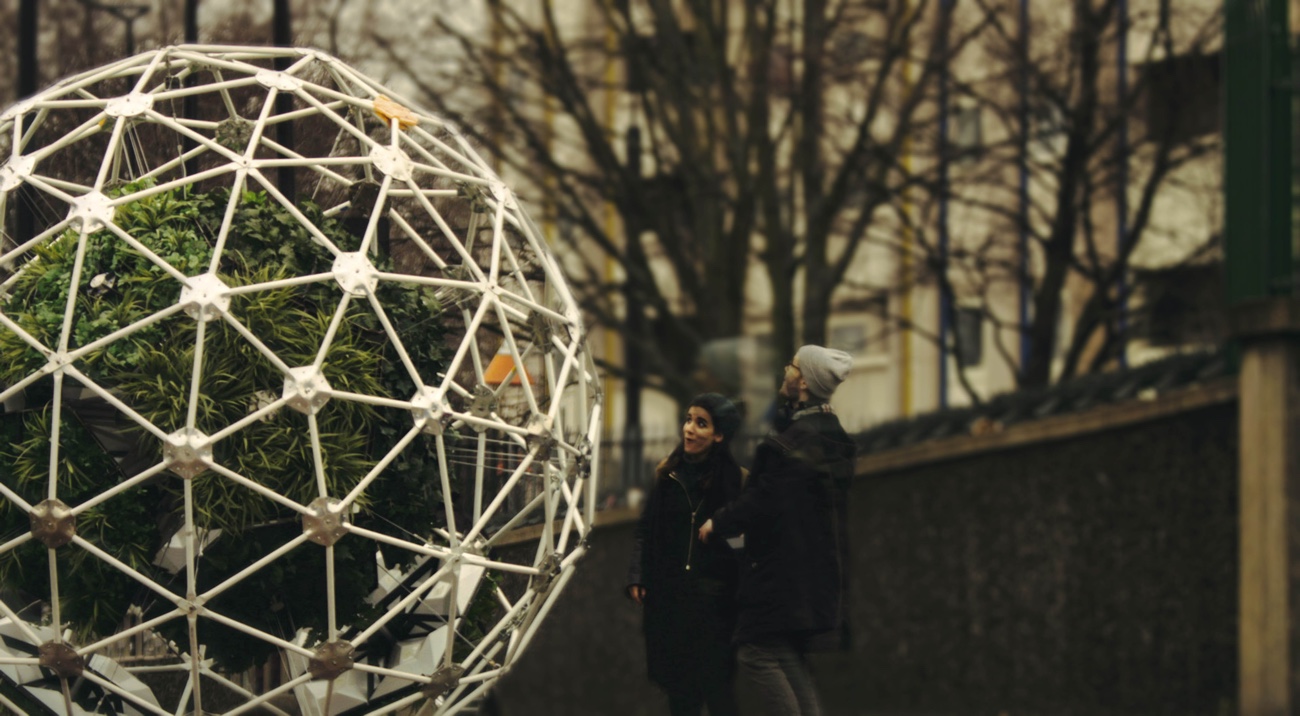 Although they don’t have what we call ‘nervous systems’, plants are actually smart and sentient. They can be electro-chemically stimulated by (and thus react to) the surrounding light, temperature, humidity, pollution and vibration. That is why William Victor Camilleri and Danilo Sampaio, from the Interactive Architecture Lab at the Bartlett School of Architecture (UCL) believe that plants could potentially have a say in the behaviour of our buildings, infrastructure and public spaces.

Their prototype Hortum machina, B (Garden machine, Bucky) is a large geodesic sphere that moves around the city according to the plants’ whims and physiological needs.

The mobile ecosystem has a robotic core wrapped in twelve garden modules. Whenever the lowermost plants require more sunlight, they ‘vote’ to have the sphere gently roll over. If it becomes too hot for the majority of them, they will steer the structure towards the shade.

The structure uses harmlessly inserted electrodes to measure the plant’s physical responses to the variation in their immediate environment and networks the plants together.

Inspired by Buckminster Fuller’s Operating Manual For Spaceship Earth, this cybernetic life-form is part of reEarth, a broader research project that explores new forms of bio-cooperative interaction between people and nature, within the built environment.

In the current context of driverless cars, and many other forms of intelligent robotics beginning to co-habit our built environment, Hortum machina, B is a speculative urban cyber-gardener, moving around the city repopulating native species by discovering suitable micro-climates. The mobilsation of the plants’ agency acts as a provocation, drawing attention to their very “livingness” and our shared goal on Spaceship Earth – to find and build better places to live and thrive. It critiques the all too often Cartesian notion of intelligence in robotics, equally existing in “smart cities” and “smart buildings”. Thus, the structure’s animacy is not simulation by robotics, but rather amplification through robotics.

Interactive Architecture Lab, The making of Hortum Machina B

Obviously, i had a lot of questions about Hortum machina, B so i contacted the architects and asked to tell me more about their research:

Hi William and Danilo! What were the biggest challenges you encountered while developing this work?

WILLIAM VICTOR: It began by entering the strange and complicated world of plant electrophysiology. The literature is predominantly scientific with only a few artists actually merging it to design or architecture. We’re very grateful to World Wilder Lab and Ivan Henriques for their support with their planEt open source hardware. Although the science goes back to Darwin, it is still quite experimental and disputed.

Thus, reading accurate real-time measurements was already a challenge. For the purpose of the project, the measurements had to be deciphered for distinct plant physiologies and moreover differentiated for diverse environmental conditions.

DANILO: The three metre tall robotic structure was full of challenges. Once the garden modules were loaded with soil and plants it was quite heavy and we had to modify the mechanism to shift its centre of gravity enough to roll around. 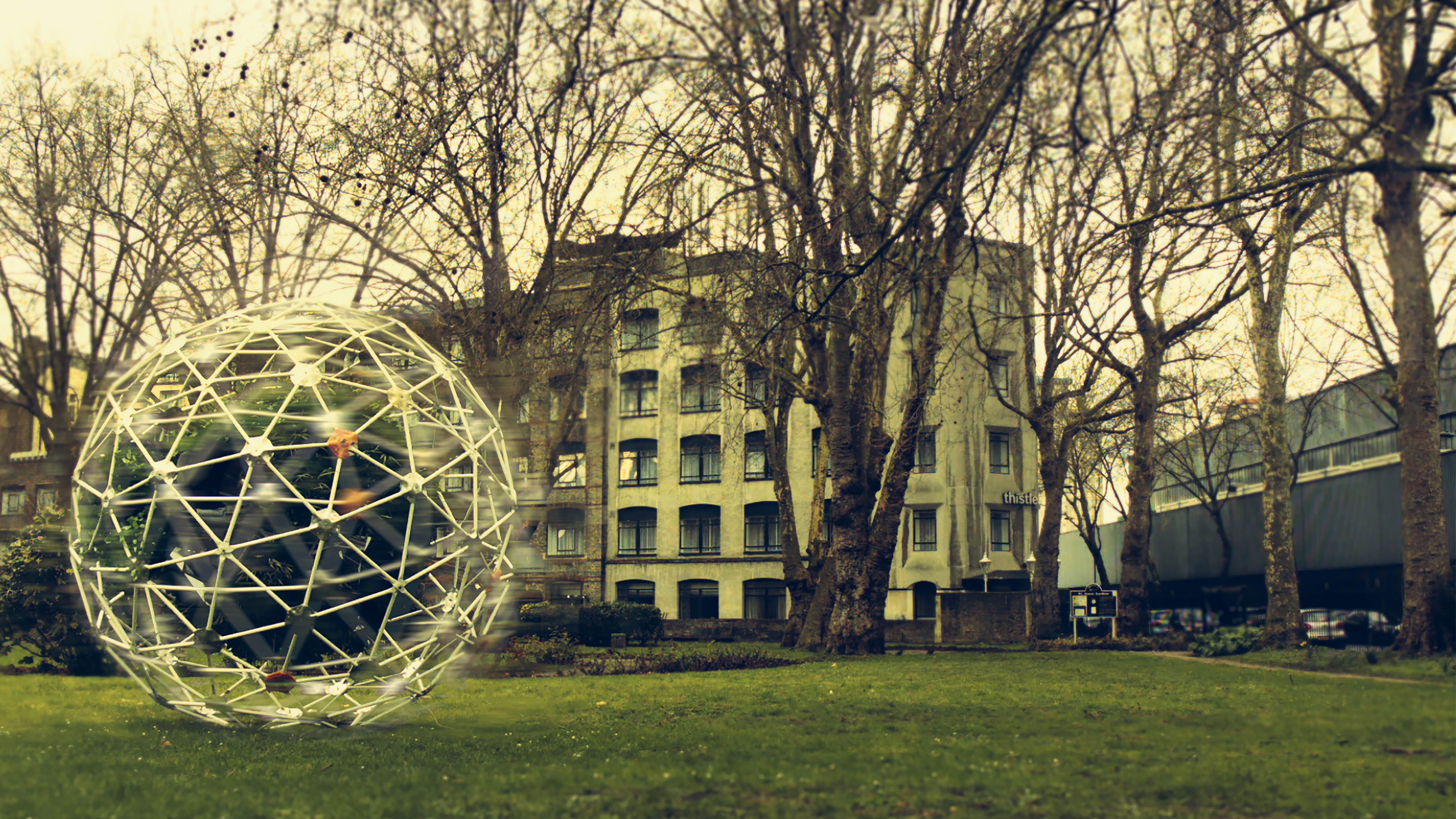 What guided the choice of plants? Is it only the fact that some of them are native British species or are some plants more reactive than others? Or could any plant do?

WILLIAM VICTOR: All plant species are reactive and measurable, although some are harder to measure than others. But the reason for our choice of plants was essentially to stay true to the local context. Hortum machina, B was built with the UK in mind, and hence it is equipped with native British plants. In Greater London in particular, it owes to architecture, that gardens and some parks are confined to specific boundaries and these are mostly inhabited and dominated by non-native plants. As they often tend to be invasive, non-native communities spread while many of the native plants become increasingly threatened. Hortum machina, B thus became an extension to a British park, a vessel with native plants in the urban London. 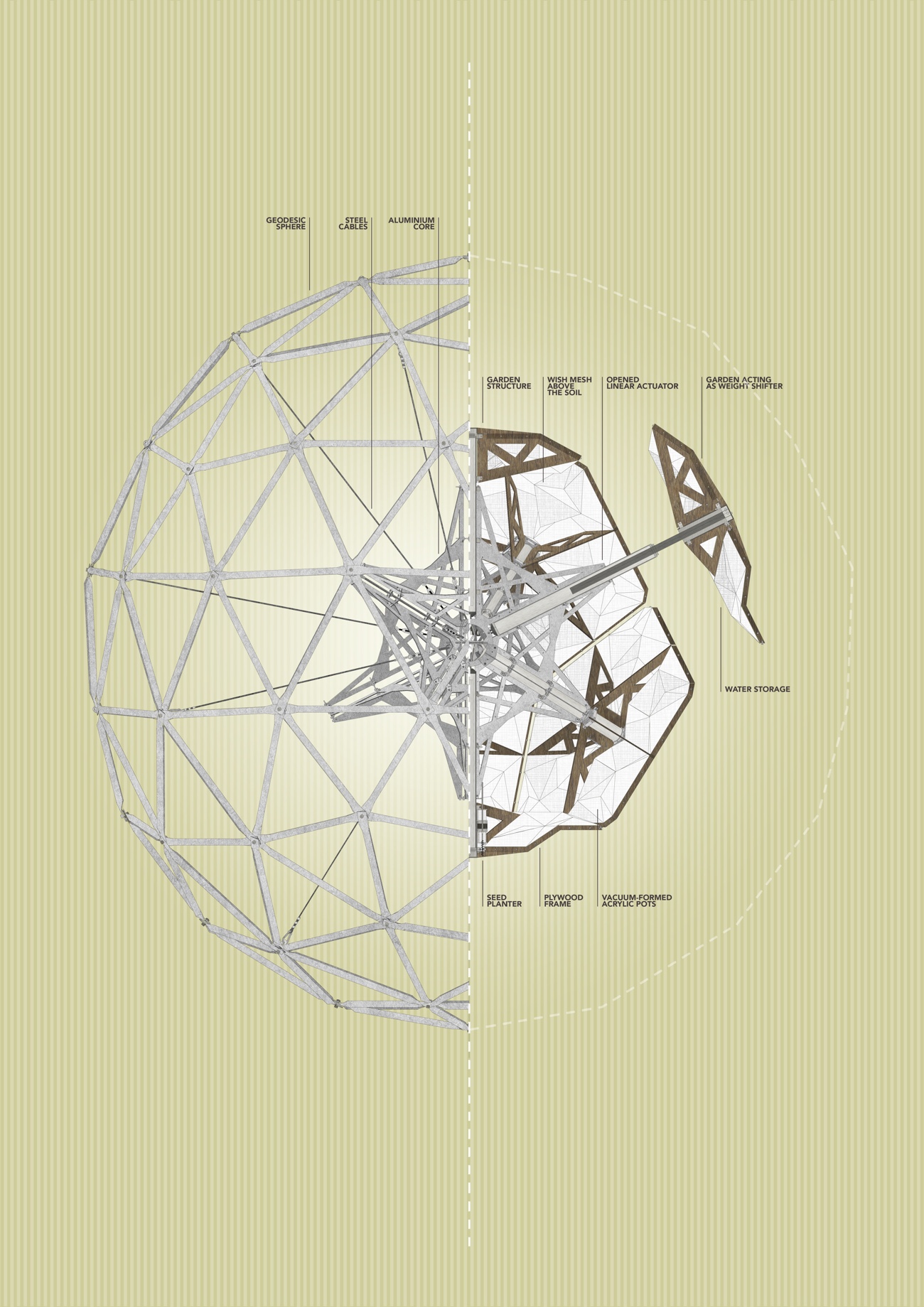 Hortum Machina, B. Drawing of the geodesic sphere section 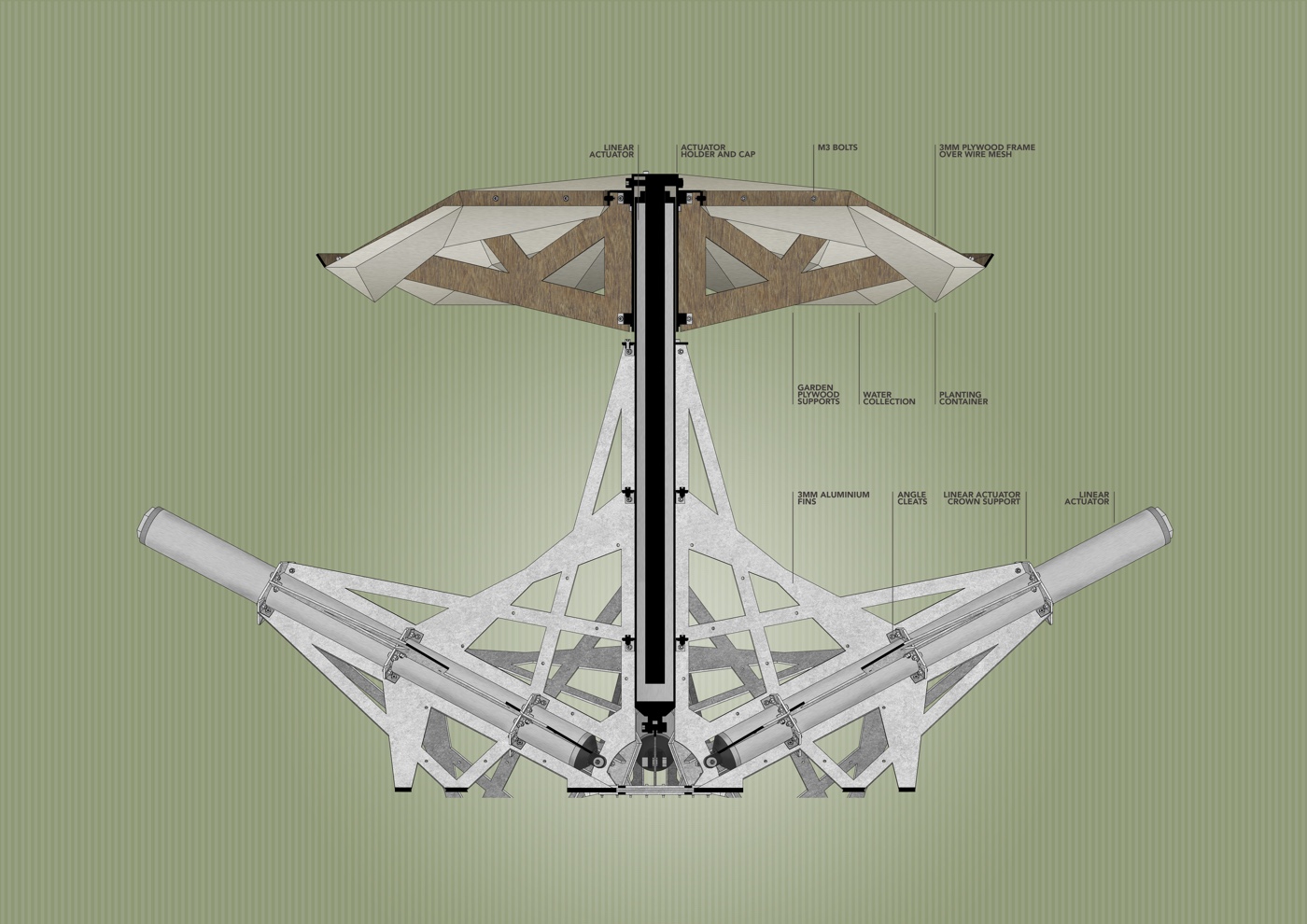 Hortum Machina, B. Drawing of the actuator and half-core section 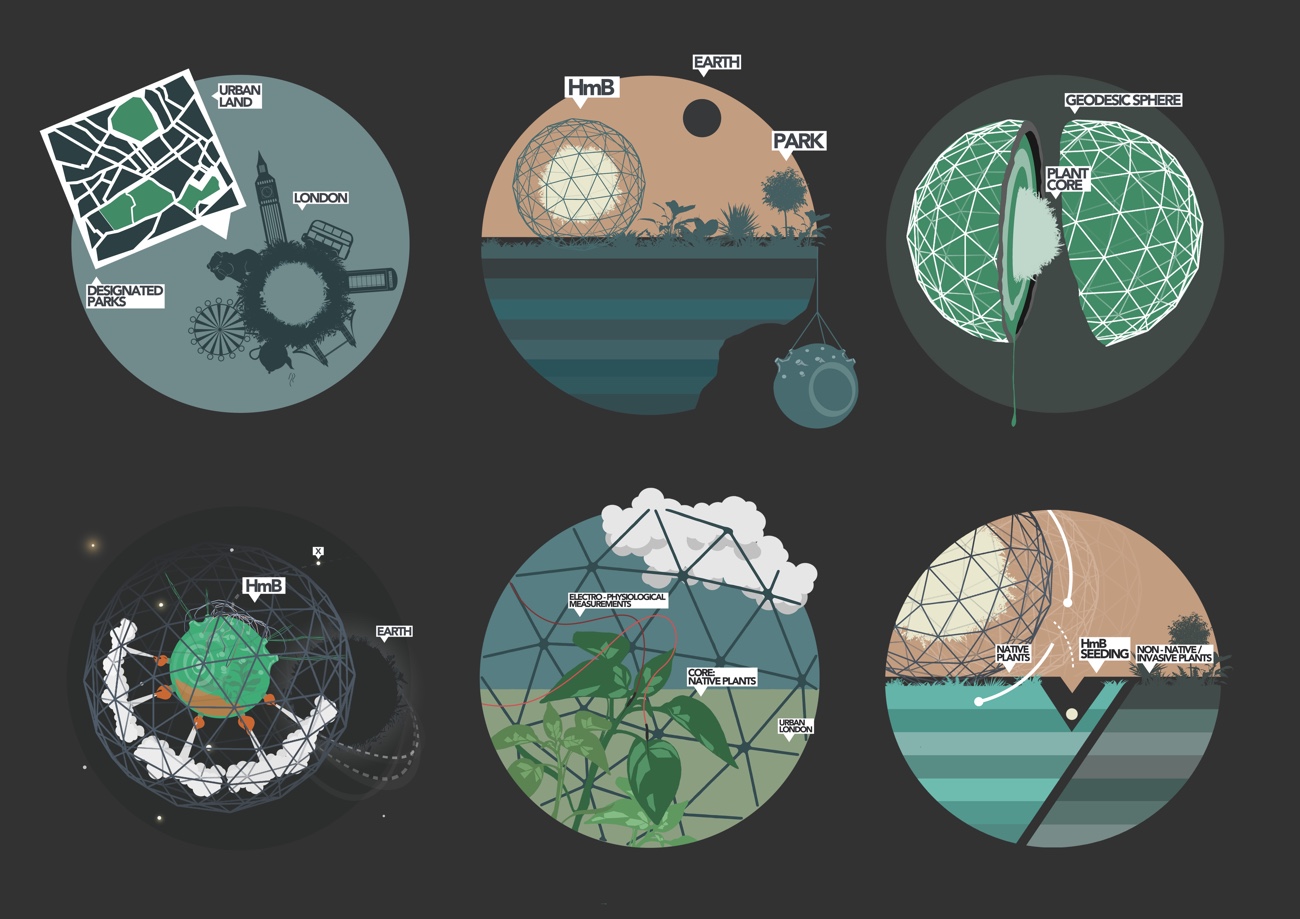 Hortum Machina, B. A narrative

I’ve also been wondering about the speed of Hortum machina, B movements. What influences it? Is it moving maniacally when there’s a lot of sun and falls asleep when night is coming? Are there other factors than light that guides the speed and direction of its movements?

WILLIAM VICTOR: Light is the key stimulus of the prototype’s feedback loop because it is quite easy to measure a plant response to it. The system observes a significant change in the electrophysiological state of the plants, analyses the external daylight conditions through multiple sensors and the sphere reacts accordingly. The circumstances range significantly. Prompted by the plants, if the sensors note a considerable amount of light, the sphere rotates to accommodate other gardens, if it’s an overcast sky, it will look for new spots of sun, and if they note an all-round darkness, then it stops its movements for the day. We can actually measure a lot of different types of stimulus. A change in lighting causes a linear transition in measurement, as opposed to wounding, where you see a sudden rise and drop. The two modes notify two separate outputs, either rolling, or the sudden extension and retraction of the gardens to notify distress.

DANILO: In terms of movement – you’d never call the movement maniacal. Its always quite slow. To make one step, the sphere takes around 30 seconds to shift its center of gravity enough to roll. Once the step is complete, the sphere needs to determine its base position, close up and then if it wishes to move again start pushing out the garden modules to change its balance again. 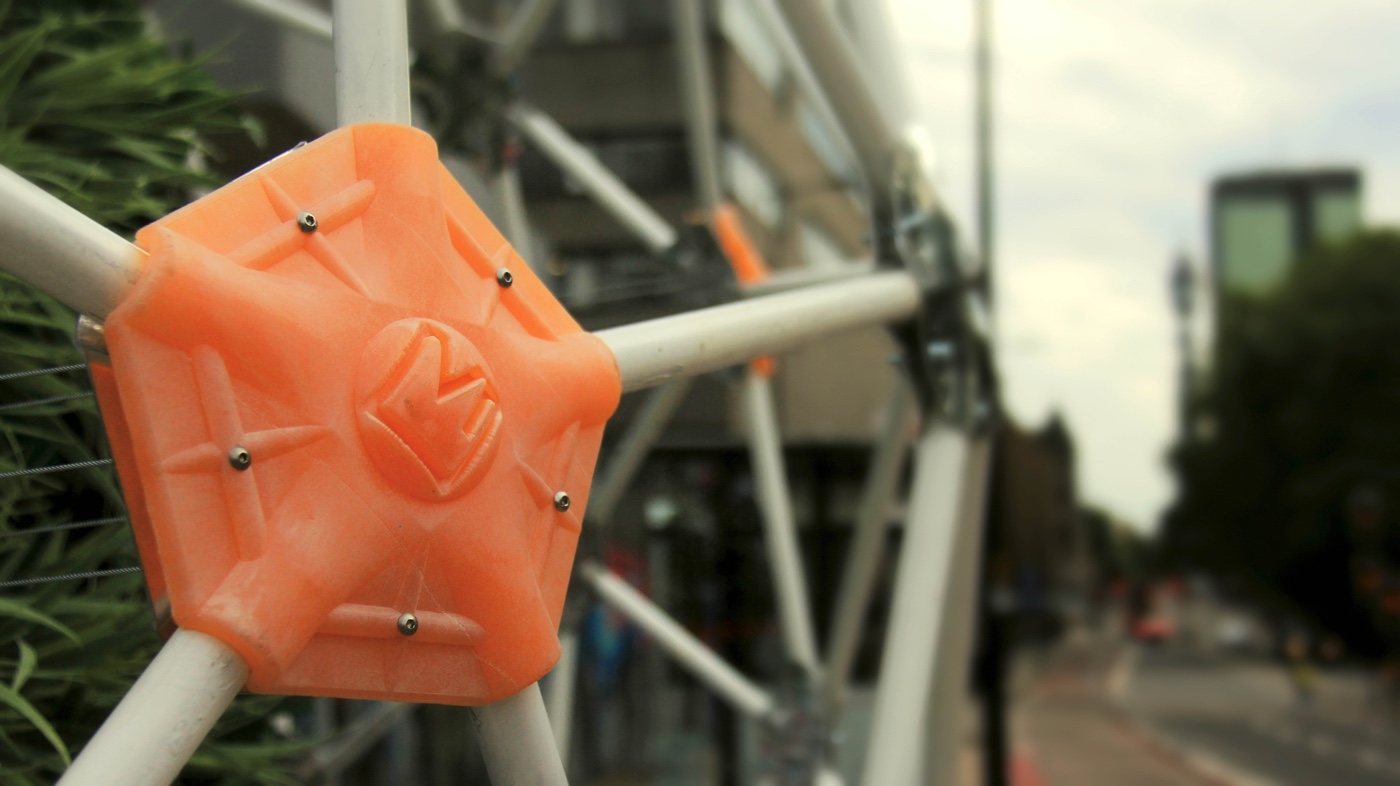 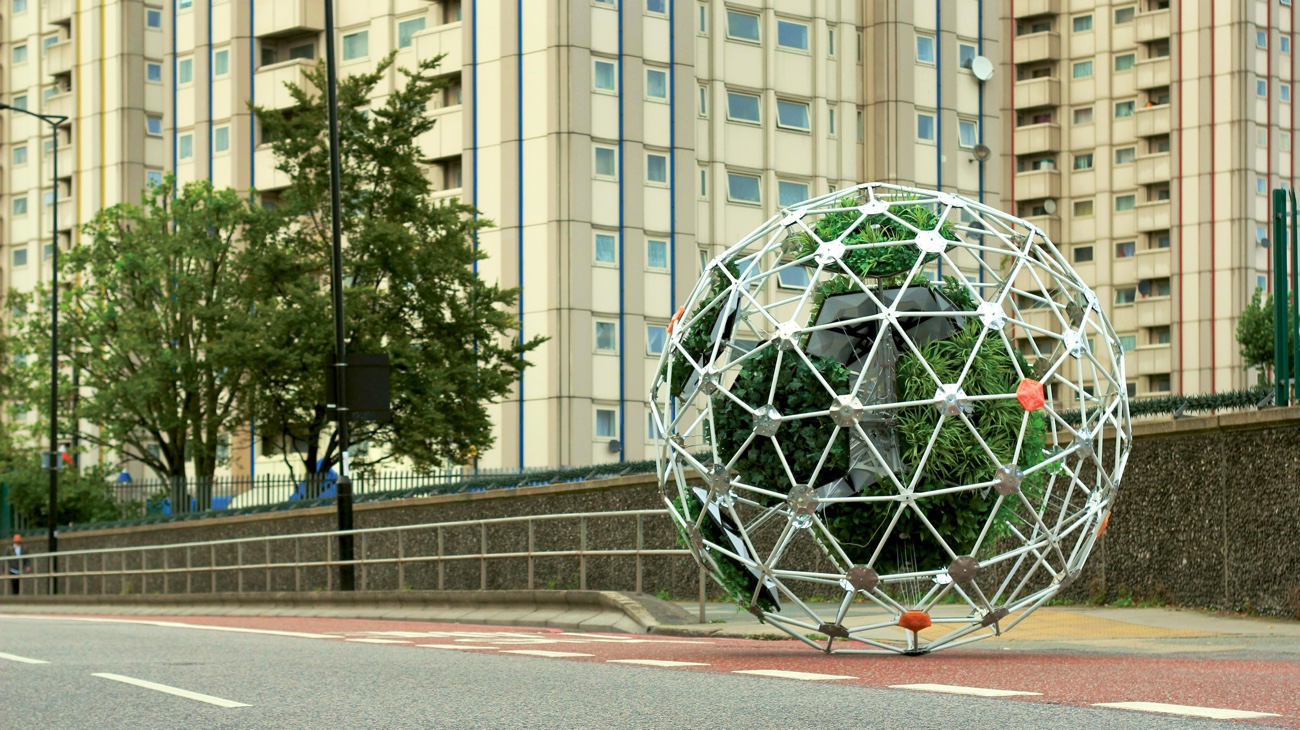 Hortum Machina, B on Hampstead Road in London. Photo by William Victor Camilleri

Have you tried using it in public space as the photos suggest? What were the reactions of passersby? And perhaps more interestingly, did the behaviour of reEarth surprise you in any way? Were there unexpected moments, behaviours and moves?

WILLIAM VICTOR: The presence of a gigantic 3-metre sphere full of plants on the streets of London left people in awe, us included. Although seemingly an imposing mechanical structure, passersby still wanted to touch the plants and climb onto the geodesic sphere. Others opted to go for the instinctive selfie, but undoubtedly, the most common question was: What is it? The valuable question and complex answer led us to give the prototype its pseudo-botanical name: Hortum machina, B (Garden machine, Bucky). As regards to its behaviour, we were quite bemused to see our prototype taking its first steps but probably, most unexpected moments came from undecided plants that would roll the sphere back and forth a couple of times. 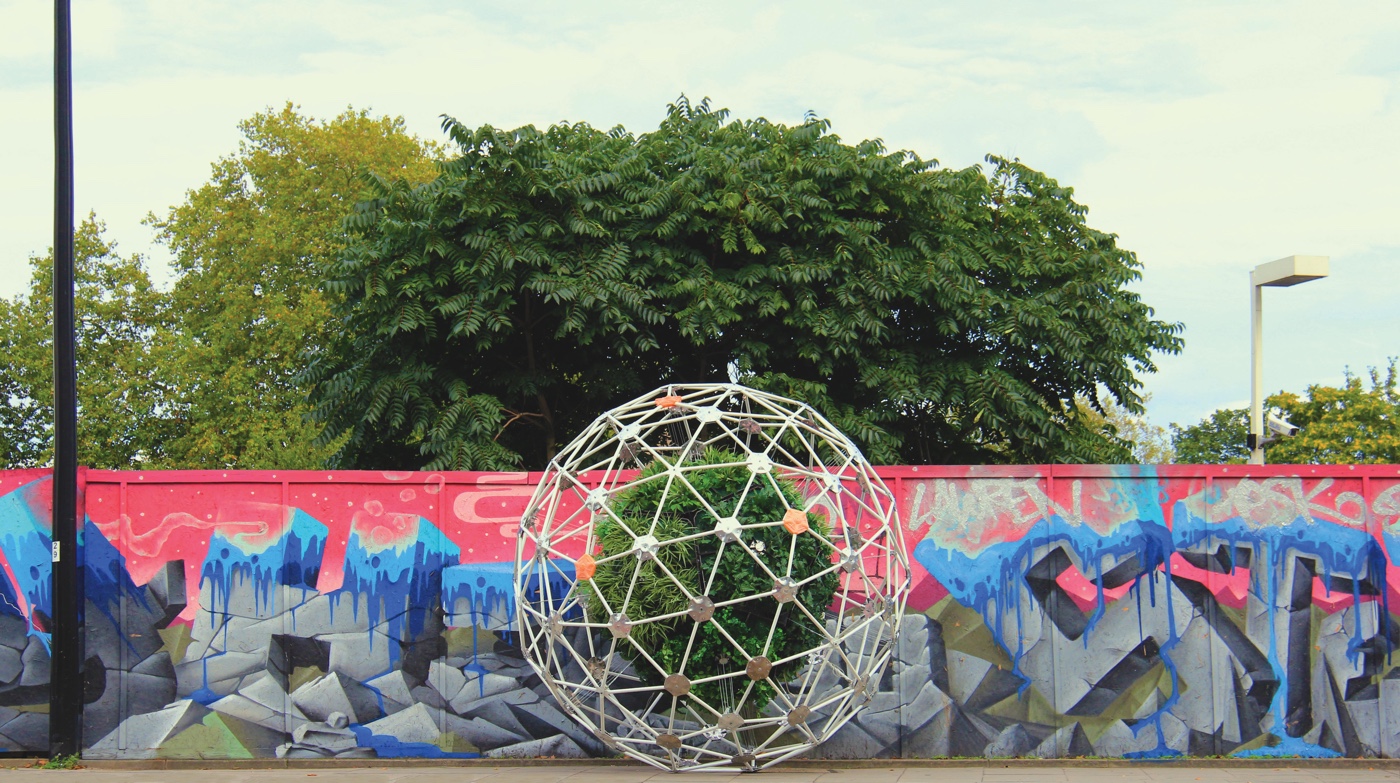 Hortum Machina, B in London. Photo by William Victor Camilleri 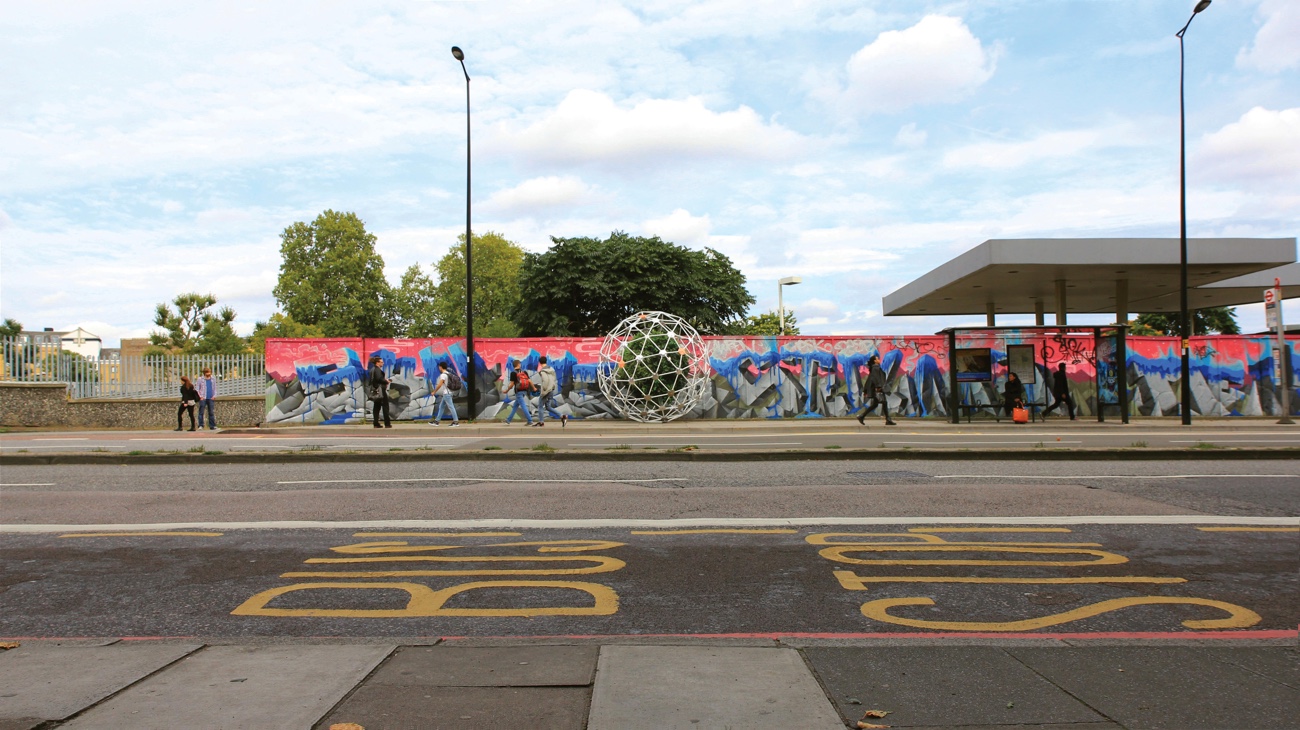 Hortum Machina, B in London. Photo by William Victor Camilleri

Do you consider reEarth as being essentially an experimental ‘arty’ project? Or do you see some concrete scientific or other applications to reEarth?

WILLIAM VICTOR: Our hero Buckminster Fuller was able to be an artist, designer, engineer, philosopher and scientist all at the same time so rather than claiming it as one thing or the other we’ll leave that in the eye of the beholder. We’ve tried to be quite thorough with the testing and then a little more playful with the application. We didn’t want this to be a purely speculative-communication project. We actually were interested in how these technologies could change the behaviour of the built environment – which is really a central question of the Interactive Architecture Lab. Rather than simulation of nature by robotics, the prototype’s animacy suggests amplification of nature through robotics.

What’s next for reEarth? And for you?

WILLIAM VICTOR: Hortum machina, B is only the first prototype of the research. The reEarth project has much more to offer on an architectural scale. As a project, new ideas are already in place for a possible next iteration. It’s intriguing to imagine distinct versions of the species actualised in several countries around the world, building a library of evolving data and behaviour in their diverse habitats.

DANILO: I’d like to investigate the applicability of its technologies on building envelopes for example. The Interactive Architecture Lab is looking a lot at how buildings could respond and change in real time according to inhabitants needs, leveraging global comfort efficiency, preserving natural resources and enhancing individual’s’ behaviour and well-being.

Thanks Victor and Danilo!