There’s nothing more uplifting than visiting a solo show, being genuinely captivated by it and then discovering over the course of a conversation with another visitor that the artist is one of your heroes and you hadn’t even realised it. That’s exactly what happened to me a couple of weeks ago when i visited Heba Amin‘s exhibition at The Center for Persecuted Art in Solingen, Germany.

Amin is one of the artists who, together with Caram Kapp and Don Karl a.k.a Stone, countered with mischief and wit the stereotypes about Arab Muslim communities and individuals that U.S. tv series Homeland was churning out with each new season. Hired in 2015 by the producers to dress a set for a Syrian refugee camp with a bit of “street art” and “authenticity”, the trio used the assignment as a platform to mock the series for being the most bigoted show on television. They delivered the street art requested. Only no one else on the set realised the sentences in arabic they had spray painted said: “This show does not represent the views of the artists,” “Homeland is a watermelon” (slang for “a sham”), #BlackLivesMatter, “Homeland is racist”, etc. 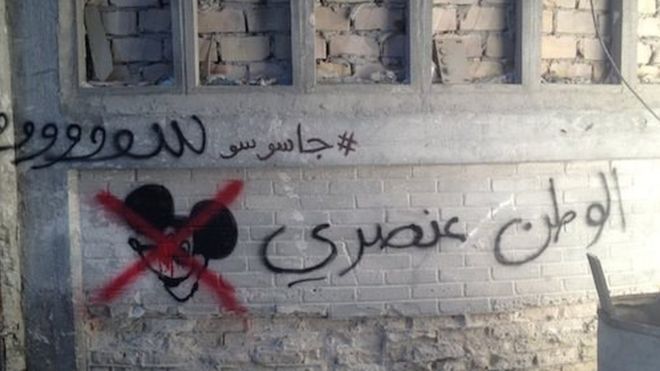 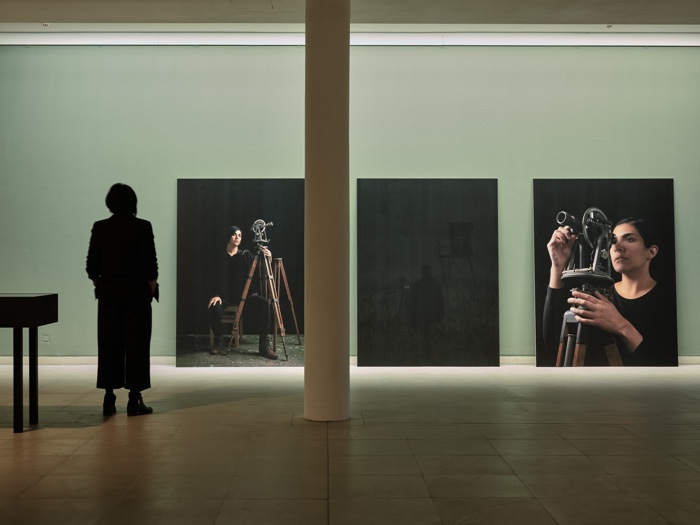 Heba Amin‘s solo show at the Zentrum für verfolgte Künste (Center for Persecuted Arts) at Solingen, near Düsseldorf, bears the intriguing title of Fruit from Saturn. Room after room, the exhibition peels off some of the many layers of North Africa’s history to reveal protagonists who might have been forgotten by most but whose ghosts linger in the landscape.

The artist weaves sometimes uncomfortable threads between the past and the present. With fearlessness and humour, her works explore how issues such as territory, social structures and the exercise of power are mediated by technologies.

The centre piece of the exhibition the replica of a memorial. A memorial that might well be one of the kitschiest memorials i’ve ever seen but that hides a fascinating story: 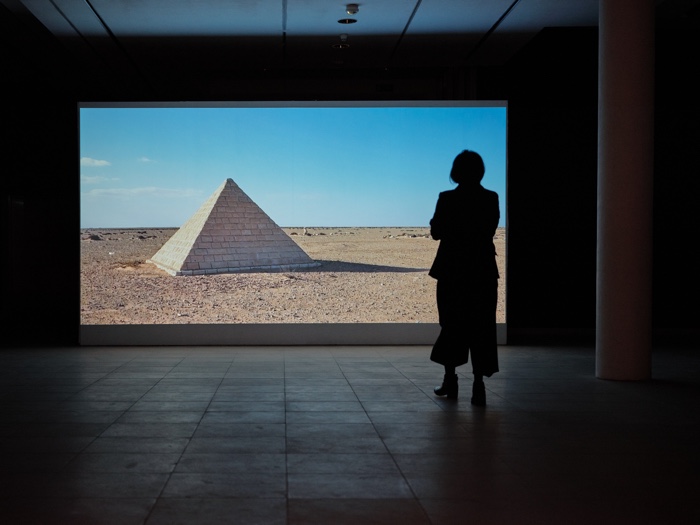 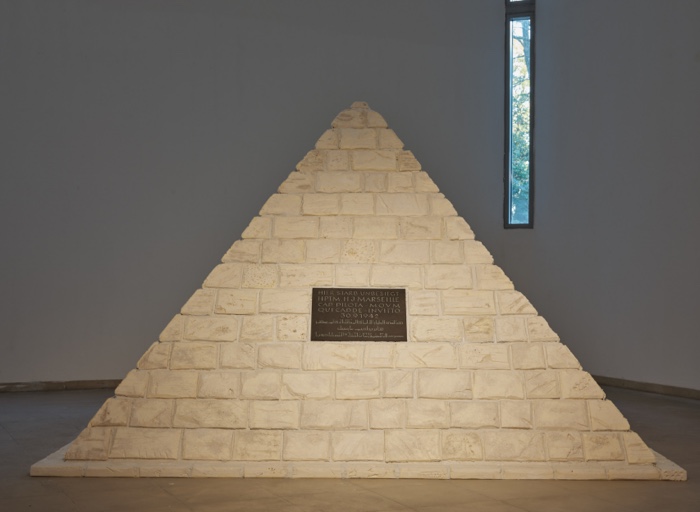 During WWII, the North African desert became the scene of European armies’ scramble for power over colonies. One of the actors of this fight was Hans-Joachim Marseille, a Luftwaffe fighter pilot nicknamed The Star of Africa for his many “successes” during the aerial battles of the Nazi North African Campaign. He shot down more Allies aircraft than anyone else but was killed in a flying accident.

Marseille is remembered through both a film and a memorial. The movie is Der Stern von Afrika (“The Star of Africa”), a 1957 German war film which drew criticisms at the time for its romanticisation of Marseille’s combat career and its avoidance of any honest confrontation with the past. As for the monument, it is a pyramid erected by German soldiers at the location in El Alamein where Marseille’ body was found after his plane accident.

Amin erected a 1:1 replica of the desert memorial in one of rooms of the Center for Persecuted Arts. The small commemorative pyramid is not the only souvenir Europeans left in the region. El Alamein was the site of a decisive victory for the Allies in North Africa. Sadly, it was also a region that German general Erwin Rommel nicknamed The Devil’s Garden. Right before the Second Battle of El Alamein in late 1942, the Axis buried an estimated 3 million mines to protect their defensive positions. Most of these mines, bombs, mortars and artillery shells were left behind and are still maiming and killing local populations today. Some have even been illegally excavated today and sold to civil war zones in North Africa.

Both the landmines and the “hero’s” memorial are part of the toxic legacy that Western ideas of modernity and progress have left on the ground. Amin brings their story on Germany soil to open up a dialogue about a European war that still claims victims today in North Africa, among a population that never saw these conflicts as theirs.

The work is accompanied by an interview with Cuban-German celebrity Roberto Blanco whose career as an actor kicked off with the film Der Stern von Afrika. Blanco played the part of Marseille’s ever-cheerful butler. The real person behind the character was Mathew Letuku, a prisoner of war from South Africa fighting for the British army. Letuku’s reports, unsurprisingly, depict a reality miles away from the one presented in the film. His experience, and that of thousands of other South African prisoners of war in Germany and Italy, were written out of the story. 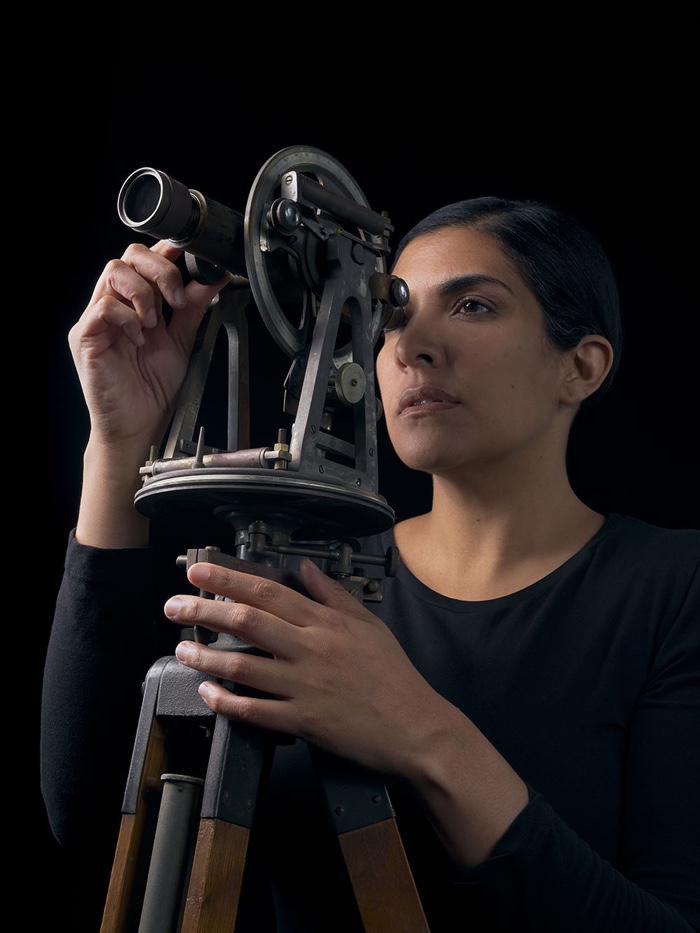 Heba Y. Amin, Portrait of Woman with Theodolite I, 2019 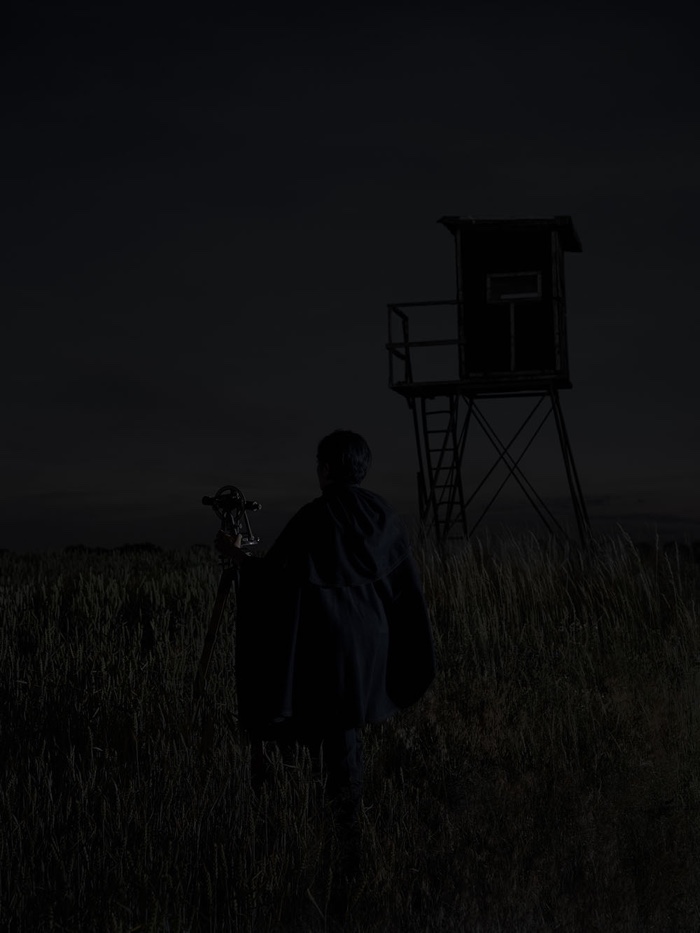 A series of photos shows the at night using a theodolite, a tool often used for land surveying. In this case, the surveyor is a young woman from North Africa scrutinising the German territory.

If the first image might seem innocent, the one titled Survey of German Landscapes by Night (New Morgenthau Plan) I leaves no space for ambiguity. Morgenthau Plan was a proposal by the Allied occupation of Germany to eliminate the country’s arms industry and other key businesses which might have enabled Germany to regain some military strength after WWII.

She uses the invasive gaze of optical tools to turn the table on imperialist predatory views of landscape and illustrate the key role that technologies played in the colonial strategies of the 19th and 20th centuries and the part they still play today in ensuring the continuing surveillance and exploitation of the resources of the Global South. 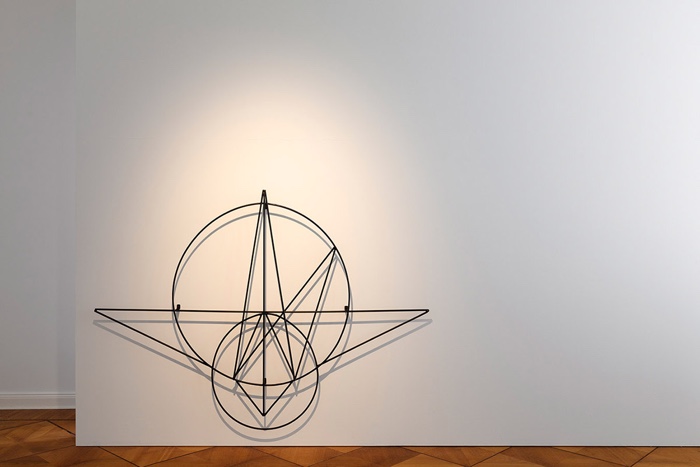 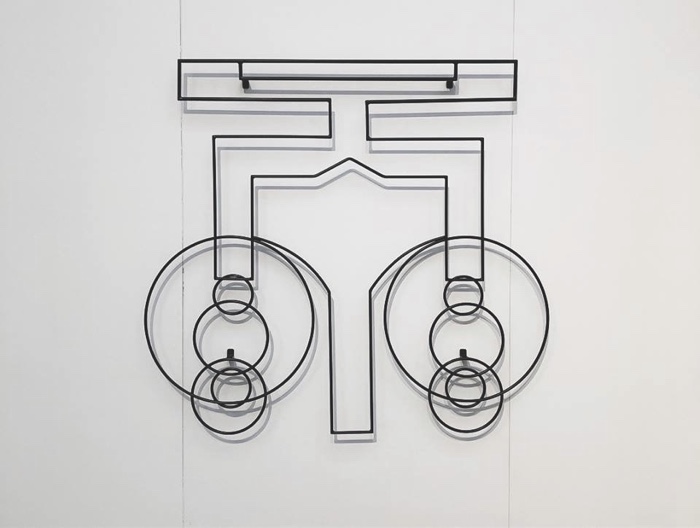 Heba Y. Amin, Optics Sculpture Vision is One of the Senses, 2016 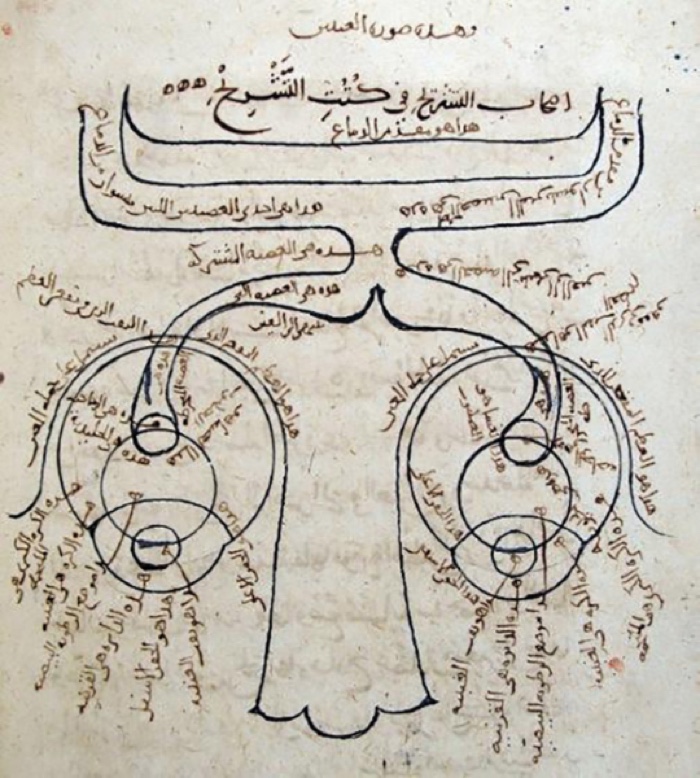 The structure of the human eye according to Ibn al-Haytham. Note the depiction of the optic chiasm. —Manuscript copy of his Kitāb al-Manāẓir (MS Fatih 3212, vol. 1, fol. 81b, Süleymaniye Mosque Library, Istanbul) 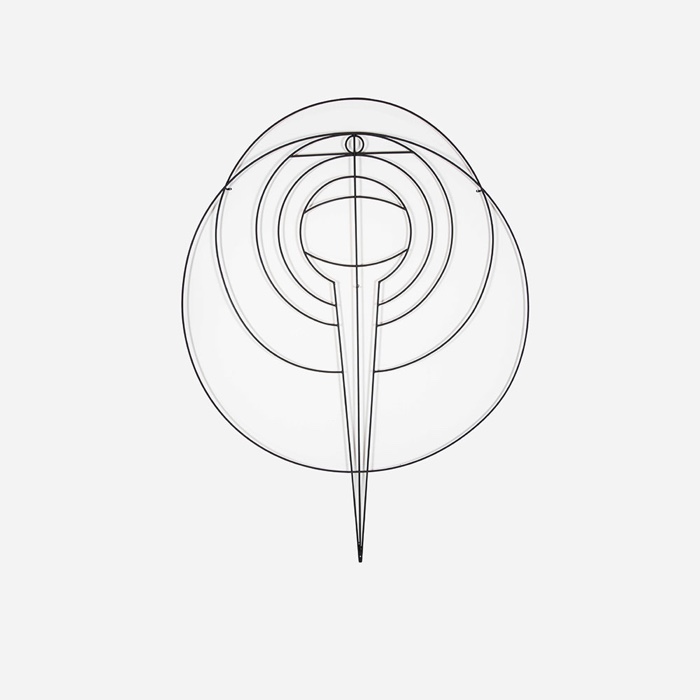 The Arab scholar established a key element of modern scientific methods when he insisted on the necessity to carry out repeatable experiments in order to test what was written in books rather than blindly accepting it as true. One of the earliest scientists to study the characteristics of light and the mechanism/process of vision, Ibn al-Haytham also proposed that, contradicting the beliefs of Ptolemy and Euclid, the eyes receive light reflected from objects, rather than emanating light themselves.

His combination of rigorous experimental methods and rational arguments had a great influence on English philosopher Roger Bacon and on German astronomer Johannes Kepler in particular. 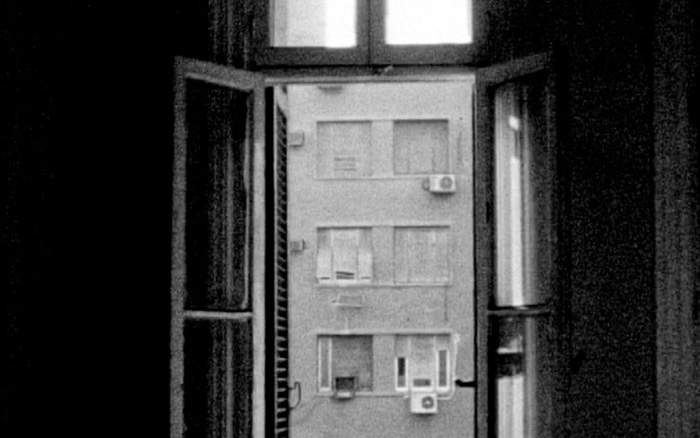 Heba Y. Amin, Project Speak2Tweet: My Love For You, Egypt, Increases by the Day 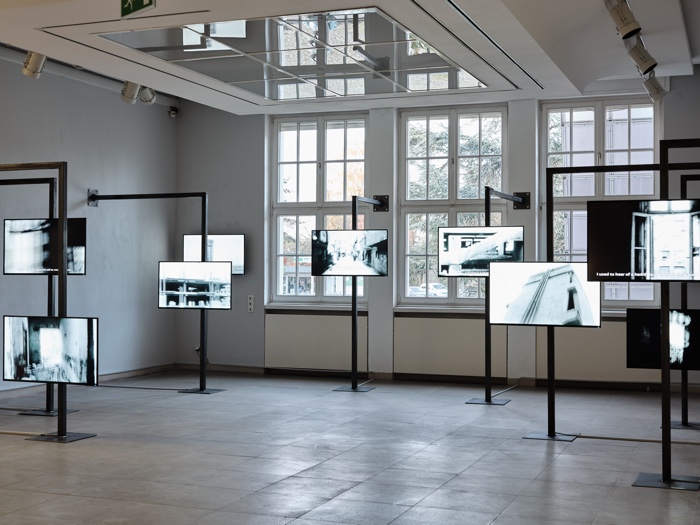 Project Speak2Tweet brings us back to the 21st century…

On 27 January 2011 Egyptian authorities shut down the country’s international Internet access points in response to growing protests. Over one weekend, a group of programmers developed Speak2Tweet, a service that allowed Egyptians to leave a voice message on Twitter by calling specific international telephone numbers. Over time, the messages grew into a unique archive of the collective psyche.

Project Speak2Tweet is a research project and an archive of experimental films that uses Speak2Tweet audio messages prior to the fall of the Hosni Mubarak regime as the soundtrack of images that show abandoned buildings. The juxtaposition visualizes the long-lasting effects of a corrupt dictatorship on citizens and infrastructures. It also brings to light the double-edged nature of communication technologies that herald new forms of democratic expression while enabling the powerful to repress it. 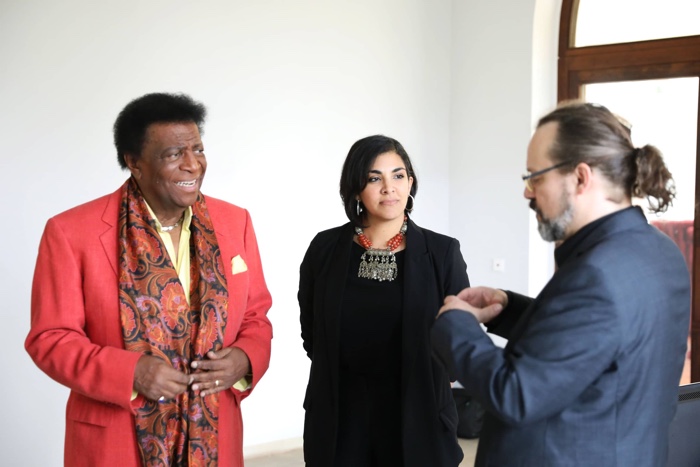 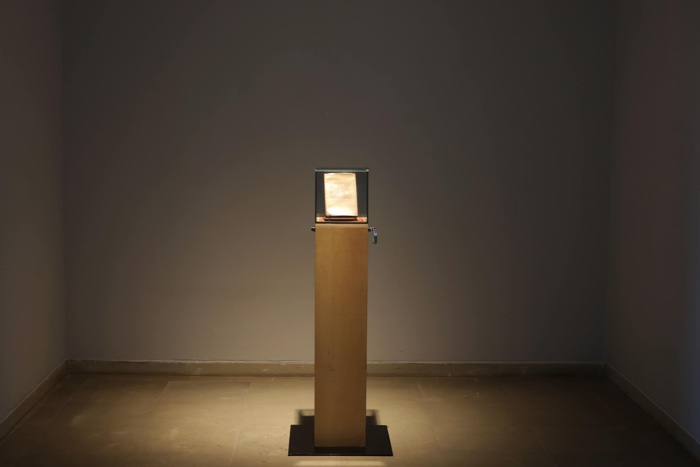 Fruit from Saturn, Amin’s solo show at the Center for Persecuted Arts, borrows its title from Yvan Goll’s 1946 book of poems by the same name. Its opening poem, “Atom Elegy” reflected the early 1940’s enthusiasm for the scientific wonders and comforts that the “atomic age” would bring. The writer later modified his poem in response to the dropping of the atomic bomb on Hiroshima. Goll’s original unpublished manuscript of “Atom Elegy” is part of the Center’s collection and is shown for the first time as part of the exhibition.

Heba Y. Amin‘s solo show Fruit from Saturn is at the Zentrum für verfolgte Künste (Center for persecuted arts), a museum that displays the works of artists who were censored or oppressed by the the Nazis and later on by the communist East German regime. The exhibition remains on view until 2 February 2020 in Solingen, near Düsseldorf in Germany.