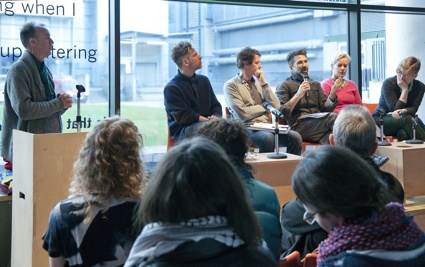 A couple of weeks ago i spent the day at the Dana Center in London for First Person Plural: The cult of the photographer and the culture of social media, a symposium hosted by The Science Museum in collaboration with Film and Video Umbrella.

First Person Plural accompanied the final days of Only in England: Tony Ray-Jones and Martin Parr, the first exhibition of the Science Museum’s brand new Media Space. The conference briefly paid homage to the legacy of Tony Ray-Jones, who chronicled the social rituals of the English in the 1960s, which he feared were at risk of disappearing with Americanisation.

In the increasingly globalised world of the early 21st century, are there equivalent expressions of cultural identity, or equally idiosyncratic social rituals and behaviours, that modern life seems to be passing by – and who are the contemporary artists and photographers who are recording them? Or, taking our cue from new technology, should we turn this question the other way round? In the age of the ‘selfie’ and social media, might it be the figure of the Photographer, as observer and recorder of social change, that is becoming passé, destined to be replaced by a new type of collective ‘portrait’ formed from the aggregation and analysis of big data? 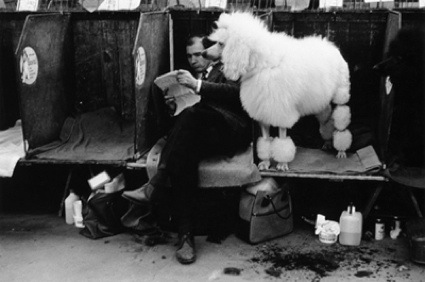 The symposium looked at the impact that current technologies and social media have on the roles, image and identity of the photographer. Some of the highlights of the day included Natasha Caruana explaining how she met with married men in search of an extra-marital affair and documented fragments of their restaurant encounters using a disposable camera, writer and lecturer Julian Stallabrass reminding me how much i love Martin Parr’s work (though i’m pretty sure that wasn’t Stallabrass’ objective) and a talk by Adam Broomberg and Oliver Chanarin whose work i’ve been following with enthusiasm since i discovered it At Strozzina in Florence a few years ago. 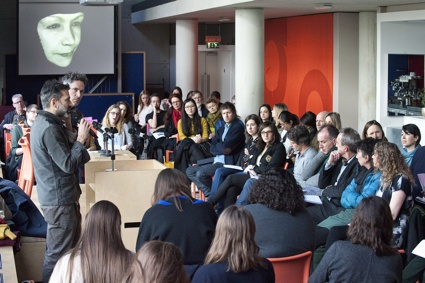 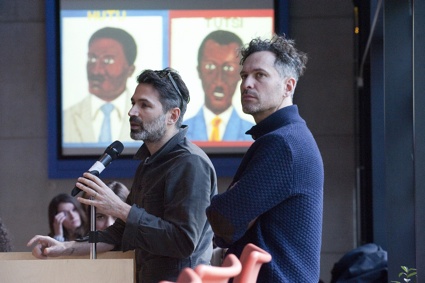 My notes from the events are going to be limited to Broomberg & Chanarin’s talk because they highlighted valid points about notions of authorship, about the perception that technology is ‘neutral’, but they also exposed how representation is complicit in events, not only documenting them but being actually involved in them. 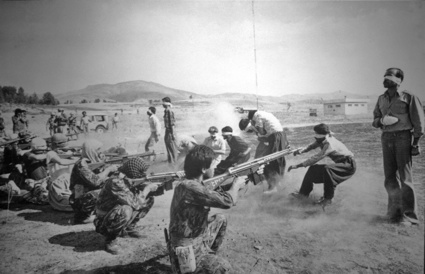 One of the first projects they discussed what the Afterlife series which reconsiders a photograph taken in Iran on 6 August 1979 by a very young Iranian photographer called Jahangir Razmi. Taken just months after the revolution, the image records the execution of 11 blindfolded Kurdish prisoners by a firing squad. This is the kind of photo that wins prestigious awards, like the World Press photo prize. And indeed it won the Pulitzer Prize award. But why is an image like this so beautiful and alluring? Broomberg and Chanarin found and met Razmi and discovered that he had taken many more pictures of the dramatic moment. They looked at Razmi’s 27 other frames and dissected them in an attempt to deconstruct the moment. For example, each time the prisoner blinded appeared on an image, they isolated him and included him in a collage which aim was to stop the emotional response triggered by the original image. The collage revealed also the mechanical movement of the photographer around that event.

The deconstruction and reconstruction of the image was inspired by Razmi’s answer to the question “What is your favorite film?” He answered that his favourite film was a film that hasn’t been made: a film of the assassination of Kennedy but taken from multiple angles. 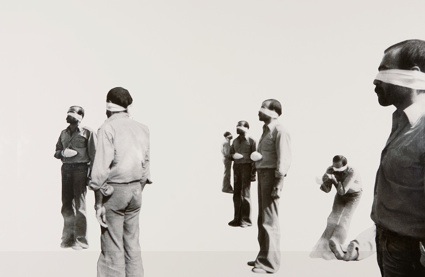 Next, Broomberg and Chanarin also explained the importance of chance in photo reportage. For example, Robert Capa’s iconic photo of The Falling Soldier was an accident. Capa didn’t even look through the lens, he held the camera up and clicked on the shutter. It truly was an accidental image. 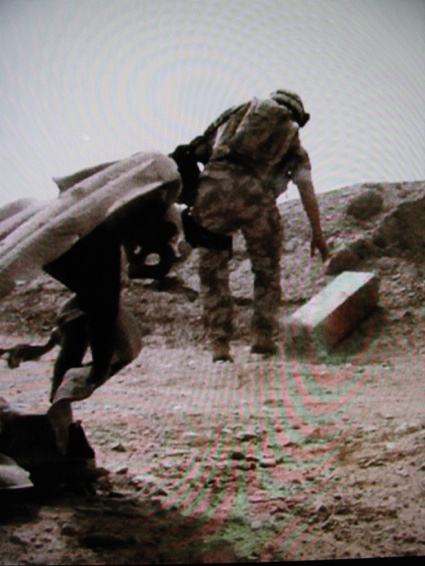 Adam Broomberg and Oliver Chanarin, The Day Nobody Died, 2008

B&C illustrated chance in photography with the project The Day Nobody Died, a work made while they were embedded within the British army in Afghanistan. Once there, they turned a military vehicle into a dark room. Each time an important event happened, the duo took up photographic paper and exposed it to light and then put it back in the box. The result doesn’t reflect in a figurative way the events that Broomberg & Chanarin were supposed to document in Afghanistan.

The works questions the viewer’s expectation from the proxy, the photographer who goes off to the war or to the scene of natural disasters to act as a witness, record and show it to to the public. How much do the images he produces have to be figurative to act as a piece of evidence of the events?

The piece of photographic paper they took to Afghanistan was there. It did go on a journey and, abstract or not, it stands in for this notion of the witness. 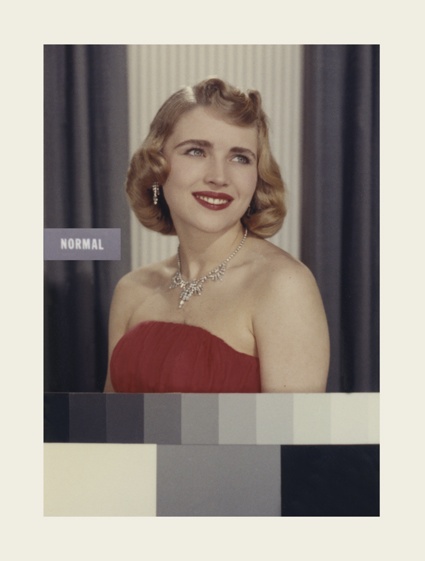 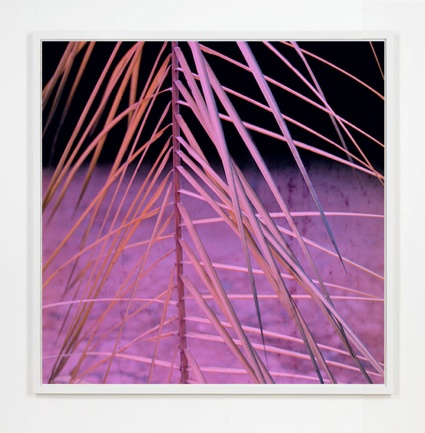 A fascinating point the photographers made was to question the assumption that there is an inherent neutrality to the technology of photography. They illustrated it with a couple of projects. The first responds to the photo of a woman called Shirley. When employees of professional photo laboratories calibrate the printing machine every day, a piece of paper comes out and it comes with various shades of grey to black, then the picture of a lama appears and finally, the picture of a woman. The woman is Shirley. In the beginning of colour films, the Kodak corporation photographed one of the workers, Shirley, and sent the picture out with the word ‘normal’ as the normal print for caucasian skin. Jean-Luc Godard refused to use Kodak, he called it racist.

Right after the end of segregation in the USA, black and white children started to sit side by side in the same class. Kodak’s range was so limited that it was at the time impossible to take a photo of a black and white child in the same frame. It was just a basic limitation of way film had evolved and that’s what Godard regarded as racist. Kodak didn’t respond to the problem until 2 of their biggest clients, the furniture industry and confectionary industry complained and lobbied Kodak because they were unable to photograph the various nuances of wood and chocolate.
In response to pressure, Kodak developed a new film which they marketed as a film that was good for “photographing a dark horse in low light.”

When Broomberg and Chanarin were invited to a ludicrous mission to document Gabon for two weeks, they went on ebay and collected unprocessed ‘racist’ films which they used in Gabon. They only produced one picture. It is pink (because the green pigment is more stable.) 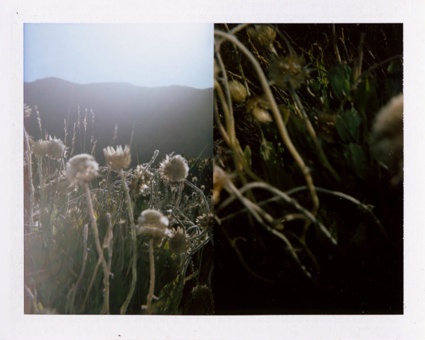 From there, the photographers became increasingly interested in the idea that a camera or a piece of films could somehow embody ethical ideas, that a piece of technology wasn’t ethically neutral. The collaboration of Polaroid with South Africa’s Apartheid State is a clear evidence of this.

Polaroid developed for the apartheid government the ID-2 camera that was used to produce the pass book picture that all Africans had to carry around with them. The camera has two lenses so that you can make the portrait and the profile in same sheet of paper. There is also a special button at the back of the device that has been especially designed for black skin. By pressing it, you increase the flash power by 42 percent.

Two Afro American employees of Kodak (“Polaroid Revolutionary Workers Movement”) campaign to convince Polaroid to retire from South Africa. They were fired but the Head of Polaroid eventually sent a delegation in the country and subsequently withdrew all Polaroid products closely linked to end of Apartheid.

Again, B&C went online, bought one of those cameras and traveled to South Africa to take pictures that turned on its head the toxic use of the camera. They decided to ignore the rules they found in the guide book that comes with the camera and proceeded to photograph the flora and fauna of South Africa. 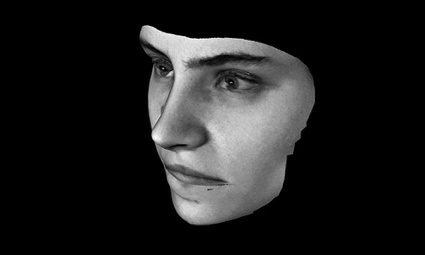 Yekaterina Samutsevich of Pussy Riot, from Two Eyes Above a Nose Above a Mouth, 2013. Photograph: Broomberg and Chanarin

The last work they mentioned is their ongoing curatorial project Shtik Fleisch Mit Tzvei Eigen, a Yiddish insult that means “A piece of meat with two eyes”.

Once again, the work emerged from what the photographers call a ‘ludicrous’ commission. When the G20 met in Saint Petersbourg, one photographer from each of the G20 countries was invited to come and create a piece of work about Russia. B&C discovered a small Russian company at the avant-garde of surveillance software. Their cameras are invisible and can be placed anywhere. They capture data as you pass through and make marking of your face. The result is not a photograph but a ‘data double’, an algorithmic map of the face, a structure of your bone. The machine doesn’t need the image to portray and identify a person. This technology heralds the breakdown of the photographer and the collapse of camera. At the same time, it announced the advent of software and computer.

The developers of the software said that the biggest challenge was developing a camera that could operate in a non collaborative mode. We are thus entering a new era of non collaborative portraiture, the subject does not even need to be aware that their face is being scanned in 3 dimensions, that can later be rotated and scrutinized. The technology totally substitute the meaning of the face with the mathematics of the face. 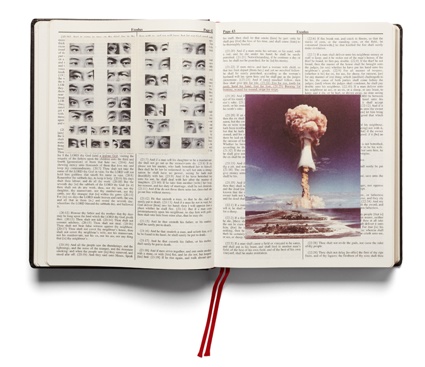 Some of the presentations are on soundcloud.

Previously: Only in England: Tony Ray-Jones and Martin Parr.