While visiting the new spaces of Medialab Prado last month, i got to discover several projects which are developed in collaboration with the Madrid-based program. One of these projects is the Citizen Cyberscience Centre, a citizen science initiative where citizens and researchers alike are invited to participate in large scale scientific projects with either some time, power from their brain or from their computer. 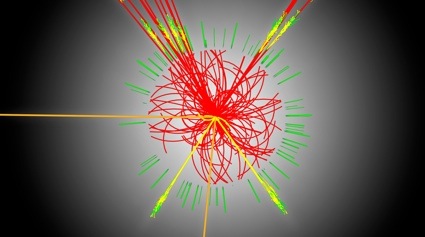 Representation of the Higgs particle 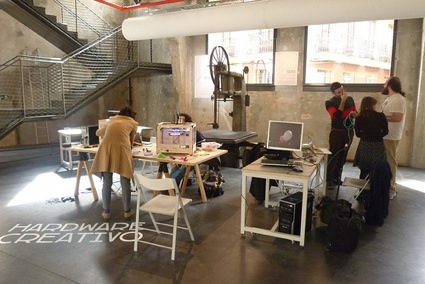 Volunteers from around the world are welcome to participate to projects that will help the scientific community identify and mark deforested areas using high-resolution Earth imagery, research the elusive Higgs particle using a virtual atom smasher, understand the fundamental laws of the universe, or the secrets of magnetism at the molecular scale.

I met Daniel Lombraña González, a researcher and lead developer of the Citizen Cyberscience Centre (aka CCC, a partnership between CERN, the UN Institute for Training and Research and the University of Geneva), at the MLP and he was kind enough to answers my questions about some of the Citizen Cyber Science projects:

Hi Daniel! How did you get to collaborate with MediaLab Prado? What sort of infrastructure, network and support do they provide the project with?

The CCC contacted Medialab this year because we think that we have a lot in common. Medialab is an heterogenous space where science, engineering and art are mixed in a beautiful way and we thought that it could be really interesting to participate with them. Medialab will offer its connections with other collectives and we will try to provide our knowledge in citizen science events like the one that we are organizing the 17th and 18th of May.

One of the most impressive project of CCS is probably [email protected], a platform that allows volunteers to help physicists develop and exploit particle accelerators like CERN’s Large Hadron Collider, and to compare theory with experiment in the search for new fundamental particles. So how exactly can people contribute, do they have to be physicists too?

People contribute by creating an account in the project and downloading two pieces of software: BOINC and VirtualBox. BOINC is the software that allows to automatically configure the VirtualBox software, that will be used to create a Virtual Machine that will connect CERN and run the simulations. The CCC developed this aspect of the project contributing the integration of the virtualization VirtualBox software (created by Oracle) within the BOINC framework.

Once you have installed the software, all you have to do is to see how your computer and user account gets credits based on the simulations that your PC are contributing to the project and check if you are in the top 20 of the best volunteers or if you are part of the Billionaires club (users who have simulated more than 1 Billion of events!)

Therefore, as you can see, the project welcomes everyone to participate and you don’t have to be a physicist at all :-) 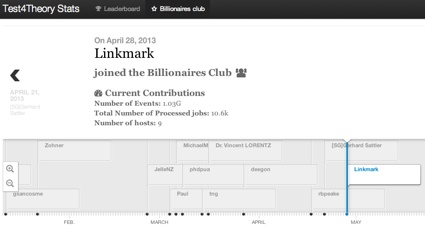 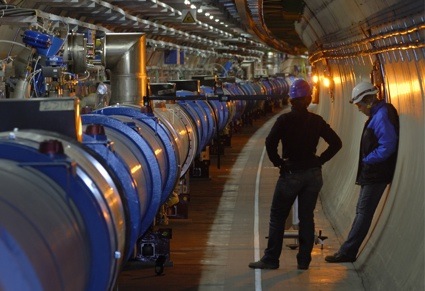 Checks are performed on the alignment of the magnets in the LHC tunnel. Photo: Maximilien Brice, © CERN

How important is their contribution? Does their help have a big impact on the research of the CERN physicists?

Here I’m going to quote the main researcher of the project about this specific question :-)

The place where T4T contributes is in the validation of the theoretical models that underpin the interpretation of the data. Roughly speaking, if we only had really bad theoretical models, the analysis of the real data would suffer. Given only very crude models, we would be more uncertain about what a real Higgs state should look like in the experiment, and what is merely unrelated “background”. That uncertainty would translate into having to run the LHC longer, collecting more statistics, before an announcement such as the one on July 4th could be made with any confidence. The fact that we do have quite sophisticated and thoroughly tested theoretical models for the physics taking place at the LHC “sharpens” our ability to extract conclusions from the data with confidence.

Day by day, T4T volunteers are testing our theory simulations. When new versions of the simulation codes are released, we incorporate them into the T4T queues and send them out to you for testing. When new test data is released, we incorporate that data into the T4T test suite and again send everything we got out to you for testing against this new added piece of information, each piece making up a small part of the full picture of what the “ideal” simulation should look like.

Check the full message from Peter Skands here, as he explains much better the implications of the contributions of the volunteers to the researchers. 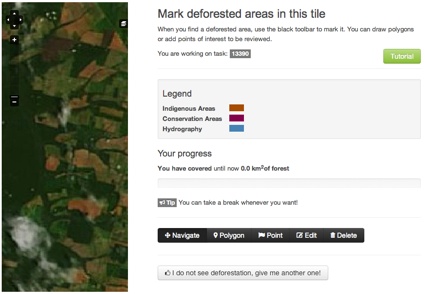 I was particularly intrigued by Forest Watchers which invites people located anywhere in the world to monitor patches of forest that need to be protected. Now a forest like the Amazonian is extended over a very large territory so how many volunteers would its monitoring typically involve?

The current project only has 164 registered users, but almost 1000 people have actually participated in the project since its creation contributing tasks :-) (you can see the stats here). We still are in the early stages of the project, and we are starting to analyze the first results, so I cannot give you that answer for the moment. We hope to have some published paper in the future, but there is no ETA yet.

And we all know about the Amazonian forrest but how about other forests that needs to be protected? Can you give other examples, in Europe in particular? 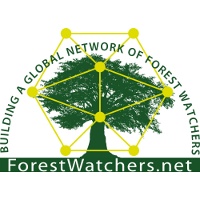 The platform was created with the idea of allowing other countries to use it in a simple way. If I’m not mistaken Europe is well covered, due to the available human power and resources that EU has for this type of natural parks. The main goal of starting in the Amazon was because INPE, one of the main partners behind the project, are the world lead experts in deforestation assessment and they contacted the Citizen Cyberscience Centre to start the project.

Now once the location of a threat has been reported, what happens? Do government usually step in? Or non-governmental organizations?

Usually the government. However, ForestWatchers.net has not contacted the government at all, as this is a research project from INPE and CCC analyzing the feasibility of getting non-experts, citizens, analyzing deforested areas. As I said before, ForestWatchers.net is a research project and we are trying to analyze if the volunteers will be able to produce good results in comparison with the experts.

How do you verify that information provided by volunteers? How can you check that it is correct and valuable?

For every task at least 30 different persons will contribute an answer. Then, we will analyze all the reported answers statistically to be sure that there are no outliers, and that the majority of the volunteers agree on the reported results. We are in the process of analyzing the data with INPE experts to quantify the quality of these results.

Most of the projects of Citizen Cyber Science are developed in partnership with prestigious institutions such as CERN, universities in France, Switzerland and England. How open are institutions in general to direct participation of citizens? Because i always thought that science was a domain reserved to an elite of intellectuals…

It depends :-) I think there is a no clear answer here. In general the first time that we approach a research institution with a citizen science proposal, the usual answer is to be afraid of going into the open. However, after showing some of the projects that we are currently running and supporting some of these scientists see the benefits of using these approaches and they jump in. It is important also to mention that even citizens feel like you, so even though there are several citizen science projects, we are not sending the right message to you, as you think this type of science is only for an elite :-)

Thus, in summary, let’s say that in general institutions are not so open due to citizen science is “grass roots movement” but it is taking pace and getting more adepts every day.

Why do you think that people contribute? What do they gain from that?

From time to time we interview the volunteers to answer that specific questions. In general, people do it because they like to contribute to the project, because they feel that science is important and this type of projects give them an opportunity to see science closer.

What do they gain? This is a really good question! Actually, we are now in an EU project called Citizen Cyberlab where we are studying actually what do they gain. In general, what the volunteers gain is a non-formal knowledge about the project where they usually learn science “by accident” :-) For example, by participating in the [email protected] Test4Theory project, some volunteers have become “experts” in the Virtualization technology that the project uses. This has been proven, because new contributers usually get help from this other volunteers with very detailed answers :-)