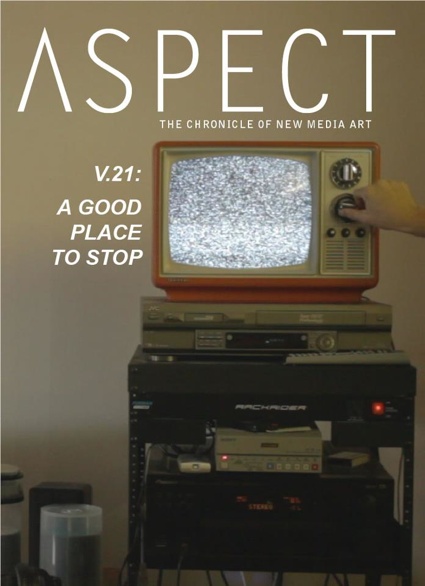 Aspect: V21: A Good Place to Stop! The title of this issue of the dvd-magazine is literal: this is the final stop for a publication that, in 10 years & 26 DVDs, has shown, promoted, curated, archived and put into context the works of over 200 artists working in new or experimental media. While i understand and respect the editors’ decision, i’m going to miss Aspect. I liked it a lot, you see. While any artwork benefits from being seen ‘in the flesh’ rather than on the pages of a magazine, time-based works usually need the addition of sound and video to be better appreciated. ASPECT: The Chronicle of New Media Art gave the public the possibility to enjoy an artwork at their own pace: each work is introduced by a brief statement from the artist, it is then shown in its totality both as it would be in any art gallery but also in a version that shows the same video with optional audio commentary by a curator, theorist or educator who discusses the background and meaning of the piece.

Aspect: V21: A Good Place to Stop presents 8 time-based works that explore the concept of endings. Either literally or metaphorically.

Alicia Eggert and Alexander Reben‘s Pulse Machine deals with the ultimate ending: death. Both the death of human beings and the one of technologies that have become obsolete.

This electromechanical sculpture was ‘born’ in Nashville, Tennessee on 2 June 2012. It has been programmed to have the average human lifespan of babies born in Tennessee on that same day: approximately 78 years. The kick drum beats its heartbeat (at 60 beats per minute), and the mechanical counter displays the number of heartbeats remaining in its lifetime. An internal, battery-operated clock keeps track of the passing time when the sculpture is unplugged. The sculpture will die once the counter reaches zero.

Pilvi Takala’s Real Snow White is by far the most charming and absurd work in the selection. The young and pretty Finnish artist arrives at Eurodisney in Paris dressed as White Snow. Soon children want a photo and autographs from her. But her adventure will end before she can even pass the gates of the entertainment resort. Takala is asked by a security guard not to enter because the ‘real’ Snow White is already inside. That could create confusion. Besides, what would happen if the ‘fake’ Snow White does ‘something bad’? The conversations between the artist and members of the security team sounds laughable. Unless you know about Disney’s thirst for trademark and its application pending with the US Patent and Trademark Office for the name “Snow White”, which would cover all live and recorded movie, television, radio, stage, computer, Internet, news, and photographic entertainment uses, except literature works of fiction and nonfiction.

There are 6 other works to discover inside the new issue. Grab yours here!