In our collective unconscious the atom bomb is synonymous with Hiroshima and Nagasaki. But since 1945 it has been documented that more than 2079 nuclear bombs have been detonated on Earth. Since the end of the Second World War, nuclear power countries have methodically bombed their own lands. Self mutilation in the name of self defense. 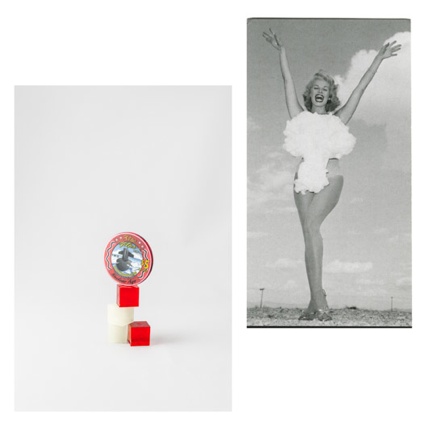 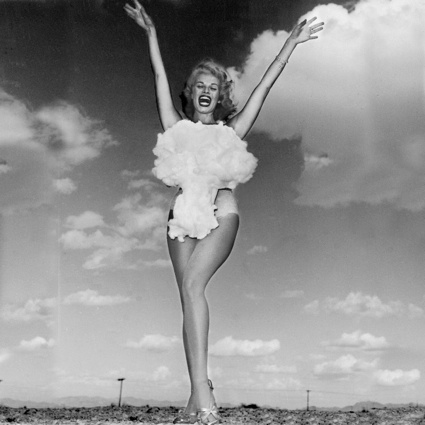 Anecdotal Radiations is a series that uncovers the unknown, forgotten and often very strange stories surrounding nuclear armament and testing programs. A couple of the anecdotes are well-known such as the Miss Atomic Bomb pageant or the story of the bikini. Others are downright baffling: the chicken vaporized when a nuclear bomb is dropped by mistake, the taste of a beer after a nuclear explosion, the ultra secret activation code on all American nuclear weapons set to “00000000”, etc.

David Fathi has collected archive photos, satellite imagery, packshots and road-trip photos. By adding his own images to the archive documents, the photographer orchestrates a series of baffling, yet true, stories that illustrate the discrepancies that exist between the world we have created and the world we believe we live in.

I discovered the series last month at the festival Photo Ireland and the more i read about these anecdotes on Fathi’s website, the more i thought i should get in touch with him and interview him:

Hi David! What inspired you to have a look at some of the ‘unfamiliar stories and anecdotes’ about nuclear bombing and experiments?

I believe my fascination started a couple of years back with one image. 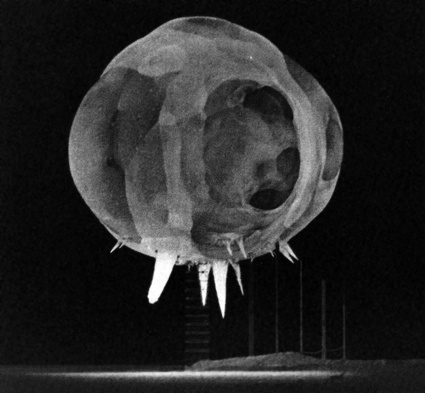 Nuclear explosion photographed less than one millisecond after detonation. From the Tumbler-Snapper test series in Nevada, 1952, showing fireball and “rope trick” effects. The fireball is about 20 meters in diameter in this shot

This is the photo of a nuclear explosion, just a couple of milliseconds after its detonation. At the time, nothing could capture such images, and scientists had to design an entirely new high-speed camera. I was mesmerized by this photo, as it is a scientific document of something terrifying but seems so abstract and beautiful.

We normally have this very clear image of the atomic bomb as a mushroom cloud, and here we have a photo that completely changes our perception of it, by showing its origin.
I wanted to find a way to talk about this image in a project some day, but hadn’t found the right approach yet.

Last year I finally started researching nuclear testing, and it was like going down the rabbit hole. I knew, just like everybody else, that nuclear testing happened during the cold war. But I had never really stopped to think about what that meant. When I thought about the bomb, Hiroshima and Nagasaki is what came to mind, even though since then, more than two thousand bombs have detonated on earth.

The more I researched, the weirder it got. When trying to deal with the gap between weapons of unfathomable power and the human stories of the men who try to master them it becomes absurd, terrifying and darkly funny. 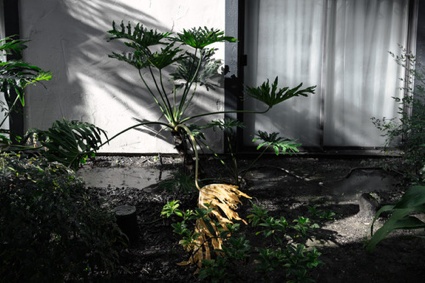 The series mixes archival photos, satellite imagery, packshots and road-trip photos. How do you combine them? do you start with archive material and then add your own images to fill some gaps, for example?

I start with an anecdote. After enough research, I find this small story that is totally true, but seems unreal. It becomes one of the building blocks around which I start gathering photos.

Then I list the typologies of photos I want to use (satellite imagery, archives, packshots, roadtrip) and try to find how I can illustrate in a literal fashion the story. Once I have gathered enough material, it seems very factual and straightforward. That’s when I try to break it up, and find images that are more metaphorical and only tangentially related to the story.

The aim is to create a documentary based on facts, but the result seems like fiction. So it’s all about finding a balance between precise documentation and playful deconstruction. 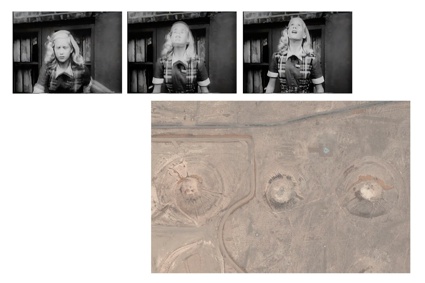 Some of the experiments you selected for the series seem to have been conceived by brazen, unconscious minds. There are also accidental releases of nuclear bombs too. Do you you think the military is more cautious nowadays or are there still some dangerous experiments taking place? How much do you think is still hidden from us?

I’m close to finishing my project, and I’m trying to find a couple of stories that are more recent, so that people remember that nuclear weapons are not just a thing of the past and more probably something we will have to continue dealing with for centuries to come.
So here are a couple of things that we learned recently about the United States nuclear program:

– In August 2007, six nuclear warheads were loaded by mistake on a military plane. When it landed, nobody knew the devices were on board. The plane was left unguarded on the tarmac for 36 hours before people realized what was happening.

– In September 2013, the n°2 officer in charge of Nuclear Command was fired for gambling with counterfeit poker chips.

– In December 2013, one of the top generals in command of nuclear armament was fired for an incident in Moscow where he was seen with Russian escort girls drunkenly boasting about what he was in charge of.

– In March 2014, 82 nuclear launch officers were implicated in a cheating scandal on their security exams.

These are just stories uncovered by the press in the USA, as Russian, Chinese, French, British, Israeli, etc. Nuclear programs are very tightly kept under wraps. It’s nearly impossible to get relevant data about those.

With all of this in mind, I find it hard to understand how nuclear armament is not more prominent in the news.

Could you pick up some of the images you selected from archives or made yourself and comment what they are about? Explaining why you chose them from archives or why and how you made them? (i started selecting the photos that intrigued me the most but i ended up with so many of them i decided i’d let you chose instead)

This photo is an actual press archive of Spanish minister for information and tourism Manuel Fraga Iribarne and US ambassador Angier Biddle Duke swimming near Palomares, Spain, after the crash of a B-52 bomber and the loss of four nuclear warheads. All to assure the local population that everything is safe and under control.
The manipulation on top of Fraga is a superposition of the satellite image of a nuclear crater. 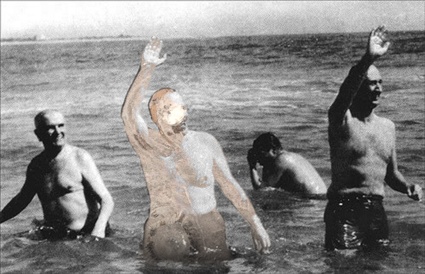 Speaking of satellite imagery, I printed out photos of nuclear impacts. I then created these sculptures for two reasons. Firstly they seem like rocks & minerals, alluding to the melted rocks you can actually find on sites where nuclear bombs were tested. And secondly to give these images a 3D existence. All these “scars” are visible just by going on Google Earth, but we still don’t really know they exist, so maybe by giving them this three-dimensional quality they can appear as more “real”. 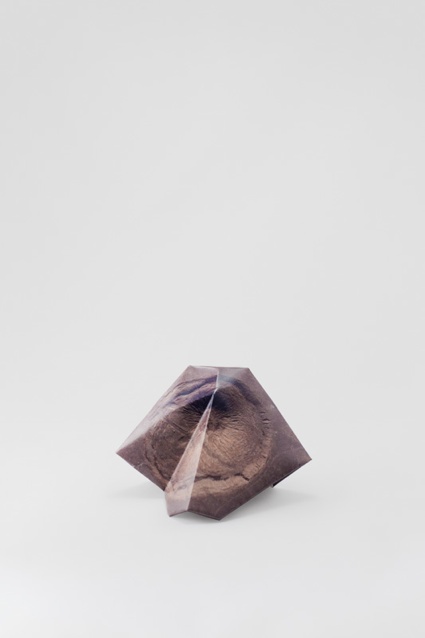 This photo was taken on the road between Nevada and California. There have been some lawsuits around these regions by communities who claim having been exposed “downwind” from the Nevada Test Site. I took quite a few photos along this path, looking for semi-fictional traces of these stories. 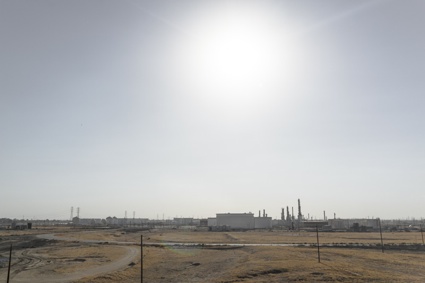 This is a screenshot from the documentary Atomic Café, a great source of information that everybody should watch. The movie has an incredible wealth of obscure archival films of the cold war era. This particular clip is still amazing to me, as I have found no clue to where it came from. It’s part of a long list of absurdities you stumble upon when doing research on the subject (like Nuclear War card games, Miss Atom Bomb beauty pageants, etc) 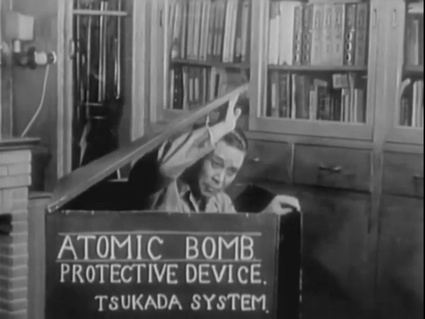 What were your objectives in publishing this series of photos. Was it purely informative and anecdotical or is there a more socially engaged or political motivation behind the series?

My interest in this subject is mainly psychological. The politics of nuclear armament seem pretty easy. Even people in charge of such programs do not see nuclear bombs as a good thing. So how do we deal intellectually with their continuing existence?

There is a huge dissonance between the world we imagine we live in and the one we actually live in. The over-the-top consequences of nuclear bombs are so immense that we naturally shut it out of our minds. My objective is not to say nuclear bombs are bad (that is quite a boring statement and everybody agrees), but more to force people to question everything, entities of power as much as their own selves.

Governments and media have of course their role in keeping out of reach the implications of nuclear weapons, but we as individuals have as much a responsibility in comprehending history, science and human knowledge. In telling these small anecdotes, I try and use humor, terror, and a general playfulness to try to suck in the viewer, and get him or her to question what they think they know.

I hope this series is more about confronting our own way of perceiving the world, and how to think critically of the consequences of our decisions.

In fact the best thing for me would be if people would even call into question my own photos and stories. I’m telling you all this is true, but you’d be better off by doubting and starting your own investigation.