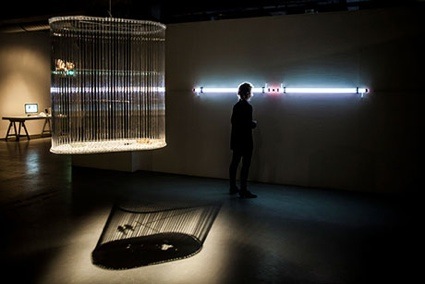 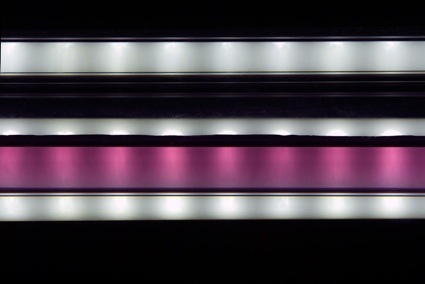 I’m sure you’ve heard about Jalila Essaidi‘s work before. She is an artist who uses biology as an artistic medium, the founder of the BioArt Laboratories Foundation and the author of one of my favourite books about bioart: Bulletproof Skin, Exploring Boundaries by Piercing Barriers. And yes, she is also the artist behind the famous Bulletproof Skin project.

Essaidi is currently participating to the exhibition Matter of Life | Growing Bio Art & Design at MU in Eindhoven with a less headline-grabbing but equally fascinating work called A Simple Line. The installation looks at how the thin line between reality and abstraction is taking shape inside our brain and more precisely at the level of the ‘simple cells’ that are responsible for the formation and perception of the abstract concept of a line.

With ‘A simple line’, Essaïdi attempts to merge the abstract idea of a line with its most tangible reality by having a zebra finch look at its own brain cells in the form of a line. The result of her experimentation joins the organic (a bird inside a cage), the abstract (colour block lines) and even the conceptual. 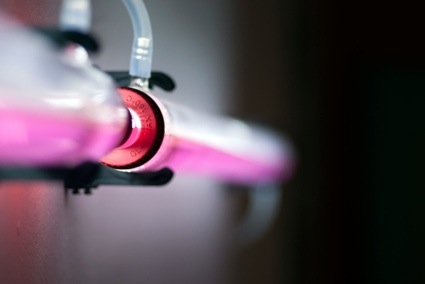 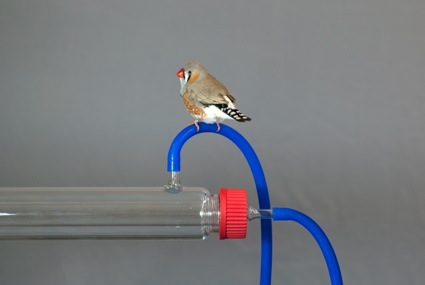 A few words with the artist:

Hi Jalila! Do you have a link to the research about specific cells (simple cells) that are responsible for the formation and perception of the abstract concept of a line?

Information processing and specifically the functioning of simple cells find its origin in the research of Hubel and Wiesel. These cells were discovered in the late 1950s. It would be hard to pin point a specific article that would be interesting for your readers but I think the videos of Hubel and Wiesel’s cat experiments say more than a thousand words. There are several available online.

Simple cells & complex cells, tests that show* how the cells are reacting to orientation specific lines:

How does the installation work? What is it made of? What do we see in the two tubes?

I have the feeling this question is technical/practical in nature so I am skipping the intent of the work, which of course is a vital part to the question “how”.

What you see is the setup needed to merge the abstract idea of a line with its most tangible reality.

The installation is a work in progress; inside the tubes a line made of simple cells is visible. The cells are attached to a thin floating horizontal structure, which acts as a scaffold. The entire installation is designed to offer an optimal environment by controlling the temperature and composition of the atmosphere inside the inner tube, containing the line.

The next stage of the work would be an exploration into golden support structures, how to preserve the line outside of its current environment, and how to combine these preserved lines into their final form. 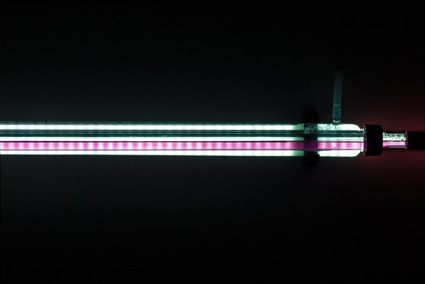 Is there a particular reason why you chose a zebra finch? rather than any other bird, or even a mouse or a bug?

Zebra Finches are, just like Zebra Fish, a model organism in scientific research. At the Bio-Imaging Lab of Antwerp University they research plasticity of the Zebra Finch brain using functional magnetic resonance imaging. These studies give us new insights in for example Alzheimer’s disease. My intention was to visualize the capacity of simple cells to detect lines using fMRI and make that the foundation of the project. This turned out to be not possible with current fMRI technology (of which they have at Antwerp the state of the art).

But even with fMRI out of the picture, the Zebra Finches stayed. Their brain being mapped out in histological- (for example http://www.zebrafinchatlas.org/)and digital three dimensional atlases simplified the entire process and of course their traditional birdcages -made mostly out of lines- charmed me and they felt like a natural choice for the project.

How did you get the brain cells of the bird?

The cells aren’t from the actual birds in the birdcage, but from zebra finches that passed away due to old age. 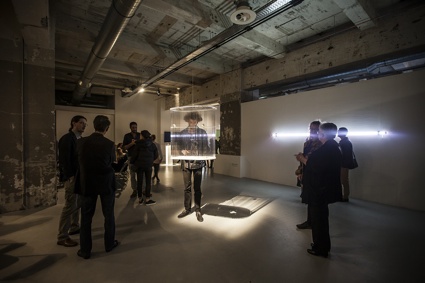 There will be an event on February 7th 2015 at MU Artspace where there will be a reflection on the work from the arts, philosophy and neurosciences. The evening will be in the format of a talk show.

I’m working on /researching a new project again with spidersilk which I hope to present at the end of 2015.

A Simple Line is part of the exhibition Matter of Life | Growing Bio Art & Design at MU, Strijp S, in Eindhoven. The show remains open until 22nd February 2015.
Also part of the exhibition: Cobalt 60 Sauce, a barbecue sauce made from ‘supermarket mutants’ and FATBERG: Building An Island of Fat.

Don’t forget to send your proposals to the BIO ART & DESIGN AWARD. The three winning ideas will be awarded €25.000 to fully realize a new work of art or design that pushes the boundaries of research application and creative expression. They will be developed in collaboration with a Dutch research institution then exhibited to the public in MU Art Space in Eindhoven at the end of the year. The deadline for applications is 2 February 2015.