Last week, i published my notes from Tax Havens: Normalized Grand Theft, the sixth episode of the MoneyLab online conference organized by Aksioma in collaboration with Kino Šiška and the Institute of Network Cultures. I’m back with a summary of episode 8: Value extraction and the workforce of the cryptocene.

MoneyLab gathers thinkers, artists, researchers, activists and geeks who question mainstream financial discourses and share their ideas about how other economies could contribute to a fairer society. The report of the whole conference is already online and i’ve enjoyed every single episode of the event but the two sessions that featured only artists were always going to be my favourite.

The episode dedicated to the workforce of the cryptocene was orchestrated by writer, researcher and curator Aude Launay. As for the artists she had invited to the discussion, they were: Martín Nadal and César Escudero Andaluz who talked about their intricate and fascinating Economy, Knowledge and Surveillance in the Age of the Cryptocene diagram; Dmytri Kleiner and Baruch Gottlieb from Telekommunisten put a Marxist spin on Bitcoin; Sašo Sedlaček introduced us to a cryptocurrency platform that celebrates idleness; Paul Seidler and Max Hampshire from Nascent presented a blockchain-based economy platform designed to reward the reading and commenting of critical content.

In her brilliant opening of the session, Aude Launay reminded us that “in the Western European region, work doesn’t seem to have been socially valued until relatively late—around the 18th century—but has then been largely glorified by the nascent modern education system of the 19th century. An activity traditionally devalued, or even at times condemned, since antiquity, work was then opposed to the spiritual meaning of life (and actually, to military activities too). Human beings were to find self-fulfilment with otium (meditation, reflection, poetry and politics…)—or war­—, and not with its negation, negotium (trade, business…).

After centuries of direct workers exploitation, the late 20th century saw otium and negotium merge in a new knowledge economy that extracted value from intellectual and cultural work. What some view as a path towards a sort of ‘dotCommunism’ unfortunately mostly led to a ‘data is the new oil’ state of mind.” 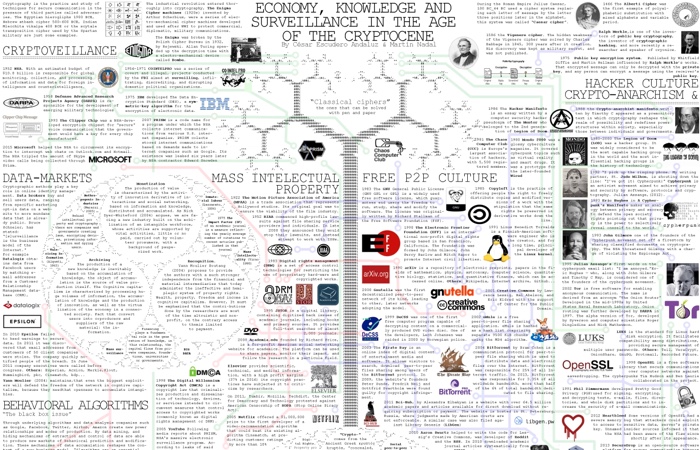 Martín Nadal and César Escudero Andaluz, Economy, Knowledge and Surveillance in the Age of the Cryptocene (detail)

Martín Nadal and César Escudero Andaluz, the first artists to take the web-stage, walked us though some of the sections of Economy, Knowledge and Surveillance in the Age of the Cryptocene, a historical diagram published in APRJA, a peer-reviewed, open-access journal about machine research. The work looks at how crypto surveillance, mass intellectual property and behavioural algorithm are constantly counterbalanced (and vice versa obviously) by hacker culture, crypto-anarchism, free p2p movements, cypherpunks & bitcoin. The work also exposes the consequence of mining processes: ecological footprint and crypto colonialism.

The document is dense in facts, milestones, protagonists and connections. Once you’ve entered its maze of information, it’s hard to extract yourself from it.

Nadal and Escudero Andaluz‘s artistic practice is not interested in creating works that exploit blockchain mechanisms in order to add layers of speculation and mercantilisation to the technology. Instead, they use art to open up critical debates about the blockchain, point to the different paradoxes and interpretations of mining processes and study how natural resources can be transformed into value. 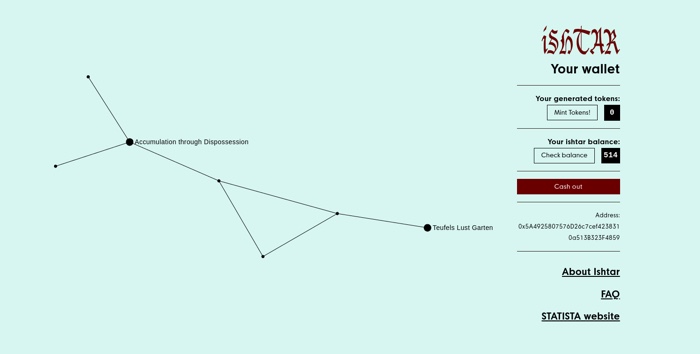 Nascent is “an EXIT TECH production studio investigating alternative infrastructures.” The EXIT TECH idea is inspired by Albert Hirschman’s
Exit, Voice and Loyalty, an essay that describes the conceptual ultimatum that confronts consumers and citizens in the face of deteriorating quality of goods or service: either exit or voice.

Last year, the artists collaborated with Penny Rafferty to launch Ishtar Gate, a platform that featured a series of critical texts written by the critic and theorist. Readers were invited to respond, comment and further contribute to Rafferty’s thoughts. In exchange for their participation, they were rewarded with Ishtar tokens that could be redeemed at KW Institute for Contemporary Art in Berlin. The tokens gave them access to studio visits, entry tickets, gallery dinners, etc.

The work intended to build new forms of engagement with institutions but also to remove the cognitive overhead that is associated with people interacting with novel crypto-economic projects, by allowing the crypto element to become passive and non-intimidating and thus facilitate a new type of cultural microeconomy. 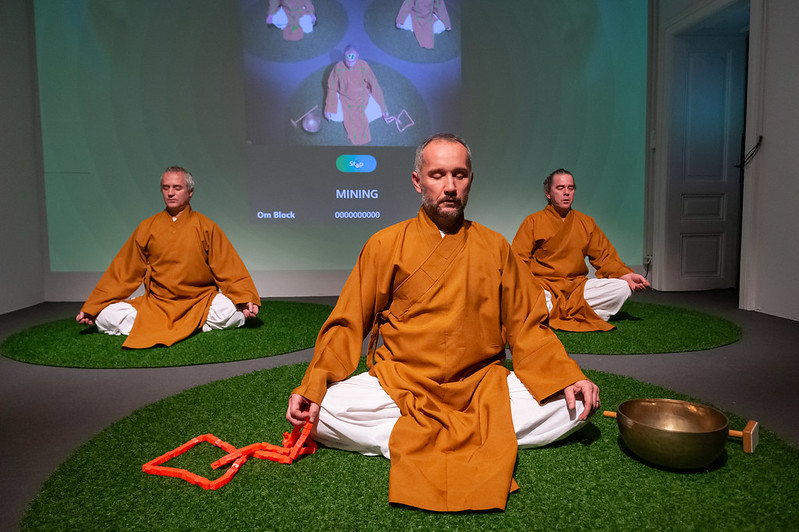 Artist and professor Sašo Sedlaček gave a very entertaining analysis of the value of human idleness.

COVID-19 gave/gives some of us a bittersweet taste of what forced human inactivity is like but, whether we liked the experience or not, it was a godsend for the environment. Even before the lockdown, projects related to the demise of human labour were doing the rounds: universal basic income, shorter working hours, human obsolescence caused by increasingly smarter and cheaper machines, etc. But how about wealth? How do we maintain local and global exchange of goods when no one is working? How do we buy stuff from robots and AI? Sedlaček doesn’t believe it can work without some sort of market economy. His new work suggests that since all aspects of our lives are now monetisable, then maybe our free time can be too and that’s exactly where Oblomo comes in! The web application rewards you for doing nothing.

The Oblomo adventure started in November 2019 when the artist set up an Om for Coin performance at Aksioma. Three performers meditated in front of a live audience while an AI rig recorded their meditation into the blockchain. That evening, they created first block of Oblomo coins. That amount is now stored in a public wallet where it is reserved for everyone to start mining. The longer you stay idle in front of the webcam of your phone or computer, the more coins you amass. Next month, the Oblomo market place will also give you the opportunity to spend your sloth coin for items and services. The crypto mining method adopted is eco-friendly: instead of using the classical proof of work, Oblomo uses machine learning detection to prove the users’ total lack of activity.

The name of the cryptocurrency is inspired by Oblomov, a Russian novel published in 1859 by Ivan Goncharov. The main character of the novel is Ilya Ilyich Oblomov, a young nobleman who raises his indolent attitude towards life to an art form, conducting his daily business from his bedroom. 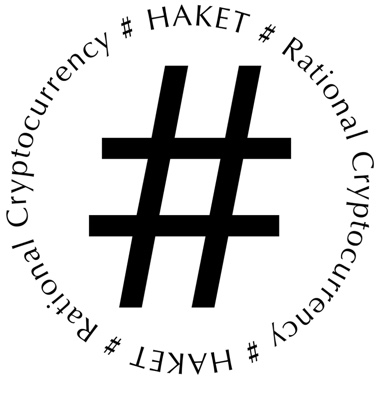 Their latest project is The Haket, a Marxist-inspired cryptocurrency. This piece of software art is intended to insert the importance of the labour theory of value into the cryptocurrency space. 200 years ago, classical economists Adam Smith and David Ricardo established that all value comes from human labour. According to their theories, Bitcoin has zero value because it is not a claim on anything. You can’t pay your taxes with it, it doesn’t bear interests, it’s not a claim to the profits of a corporation, it is not securitised with anything… As a financial instrument, its value is thus zero. Even the Austrian economic school, which tends to inform the Bitcoin community, agrees that the value of Bitcoin is also zero because it has no collateralised value.

In his article titled The Face Value of Bitcoin: Proof of Work and the Labour Theory of Value, Kleiner discussed how the true value of bitcoin is zero because it is decoupled from the amount of labour that goes into producing bitcoins:

The only school of economics in which Bitcoin doesn’t have a zero value is the Marxian one. According to its theory, value comes from the amount of labour embedded in the cryptocurrency. In this case, it’s the computing power of the resources used to produce the block. Another condition for value is that there is a demand and there clearly is a demand for Bitcoin.

In the Haket, the amount of Hakets produced is a direct ratio of the number of hashes required. In that sense, the Haket is a rational cryptocurrency.

The coding part of the Haket, the artists explained, is dramatically simple because the bitcoin algorithm already gives you an approximation of the computing power used: it’s called the difficulty. The amount of Bitcoins created when a block is mined is the block reward. The block reward in the Haket model mirrors the difficulty, which is different to how the Bitcoin algorithm works. By driving the block reward directly from the amount of work being done, the Haket will act like other commodities. If more miners enter the system, they will create more supply which will bring the price down and the market will regulate the price like it regulates the price of any commodity on the market. Again, this is what makes Haket a “rational” cryptocurrency, because its value is always a “ratio” of the amount of work that goes in to it.

Telekommunisten is not a fintech startup and they have no intention to operate a currency network. The Haket is an art project that attempts to illustrate how a cryptocurrency tied to material conditions would work and how it could offer a solution to the problem of the volatility of the price. They are also working on a Haket version for Ehtereum. The principles are the same: forking Ethereum and removing arbitrary distortions.

Previously: Value extraction and the workforce of the cryptocene and César Escudero Andaluz. So many ways to mess up with surveillance capitalism.
Conference report.