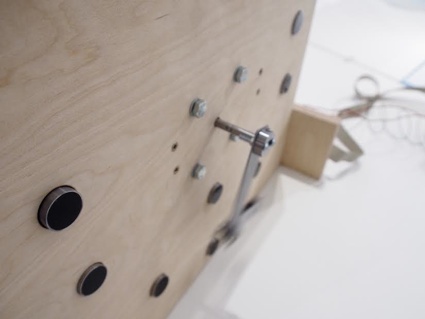 The Phillips Hydraulic Computer (known as Monetary National Income Analogue Computer or MONIAC in the U.S.) was an hydro-mechanical computer created in 1949 by Professor Bill Phillips to model the economic processes of the United Kingdom. The 2 metres tall analogue computer used the movement of coloured water around a system of tanks, pipes, sluices and valves to represent the stocks and flows of a national economy. The flow of water (which symbolized money) between the tanks (which stood for specific national expenses, such as health or education) was determined by economic principles and the settings for various parameters. Different economic parameters, such as tax rates and investment rates, could be entered by setting the valves which controlled the flow of water about the computer. Users could experiment with different settings and note the effect on the model. 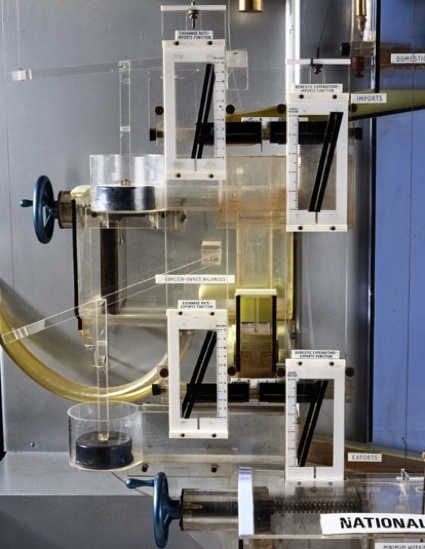 Phillips demoed his machine at the London School of Economics in 1949. Copies of the machine were built and sold to universities, companies and banks across the world. A few of them remain but it seems that the only one still working is located at the Faculty of Economics and Politics at Cambridge University.

Economic theories have grown in scale and complexity in the last half a century but many models are still founded on newtonian physics. Inspired by this hubris of correlating human behavior to mechanical equations, Design Interactions student Neil Thomson is attempting to create a Phillips machine based on modern economic models.

The current prototype is the first iteration of this attempt. based on the Euler Equation which describes a consumer’s propensity to save or spend in relation to the present and predicted interest rate, it attempts to find a pattern in the movement of the double pendulum that matches the designer’s personal economic data.

Neil Thomson was showing the first prototype of the Economic Computer last month during the work in progress exhibition at the Royal College of Art. I contacted him recently to get more details about his project:

Money systems and economies are a mystery to me and I think most people would say the same. Economists might say otherwise and certainly in politics you have to make categorical claims. I think this is fascinating, this open secret that there’s a level of complexity beyond which we can’t understand (let alone predict) but I think we need someone who believes they can. I’ve been told by an economist at the Bank of England that being caretaker of the nation’s finances is akin to piloting an oil tanker in total darkness.

Whilst researching economic theory you find that there is in fact a lot of debate within the field about the usefulness of economic models. Why these berated systems are still here, despite all the flaws I think is not only interesting but an urgent question for us all.

The best answer I found to that question so far suggests the things we would think of as flaws – over simplification and generalisation – are in fact the very reason these models are still here: economic equations take numerous (but measurable) variables, process it with seemingly objective mathematics and give a finite answer that is given with certainty. Other fields can’t or won’t make such claims.

I think it’s part of our nature to study systems and look for patterns – that’s why I think these systems, especially physical representations of them (such as the Phillips Machine), are so seductive. 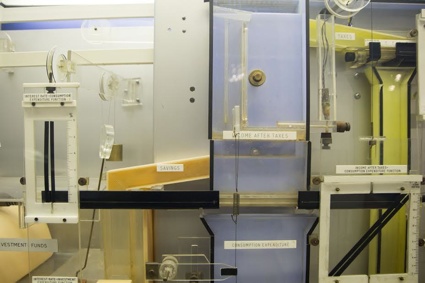 Would your own version serve the same demystifying purpose?

That would be the intention but its success is going to be purposefully questionable. What I would like my project to achieve is simply that people think about how and why these systems are conceived and what impact they have. Often they start as diagnosis tools but quickly evolve into a template that then becomes prescriptive and self-fullfilling until the inevitable black swan event comes along and tips everything over the edge.

I’m still very much in the design process at this stage but I’m going to look at analog mechanisms as Phillip’s did which i think is interesting in two ways. Firstly, it exposes the mechanical mathematics behind these models that generalise human behaviour. Secondly, they help to correlate the claimed objectivity of these systems to aesthetic subjectivities, allowing us to see them as questionable.

And how are you going to build it?

Instead of taking on the entire economy I’m going to look at my own finances. I will analyse my personal economic data and look for patterns in my spending behaviour, such as most data analysts and economists would do. Similarly I will have to gloss over or generalise when faced with missing data that may explain my behaviour. I will then try to isolate some of these patterns and develop a device for each creating several smaller machines. These will then combine (and possibly conflict) to create a whole – an economic algorithm of me.

Is your machine really going to focus on the global economy?

Once I have an algorithm that predicts my economic behaviour I can then use it as a ‘microfoundation’ in a larger economic model. Microfoundations are the name for a relatively recent development in economics; instead of an equation that describes an entire economy, they use algorithms for parts in that economy (e.g. a business or household) and these individual agents are then multiplied and interact in a simulation. Eventually I would like to get to this level to see what en entire economy of me would be like. 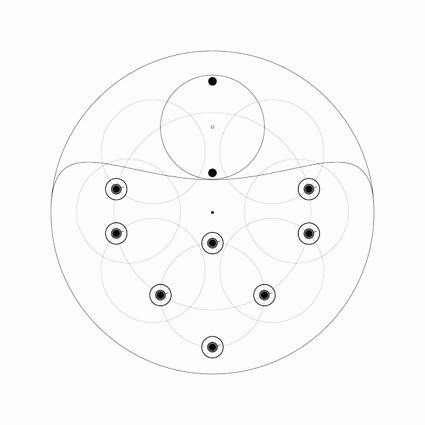 How does the Euler Equation come into play here?

An economic Euler Equation (the same name is given to a whole class of general maths equations) describes how much a household or individual will spend / save given the interest rate, their credit limit and current balance. Its based on the idea that people act rationally to maximise their profit. I am basically creating my own version of this equation.

Are you planning to push the project further?

Absolutely, this is the very first step!

Previous posts about this year’s RCA work in progress show:
Walden Note money – How would money function within a behaviorist society? and Chicken warming up nuclear mines and other technocratic fables.