A week ago, i was in Rome to visit the spectacular Centrale Montemartini (a former power plant converted into a museum for Ancient Rome sculptures) and an exhibition at MAXXI about artistic imaginaries in the age of AI. That one had a couple of very good works (by Nathaniel Mellors & Erkka Nissinen, Zach Blas, Trevor Paglen and others who never disappoint.) The exhibition closed a few days ago but the guide is available as a free PDF if you’re curious about the show. 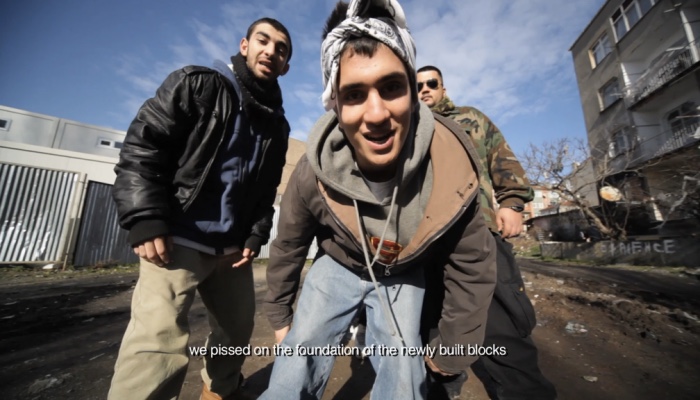 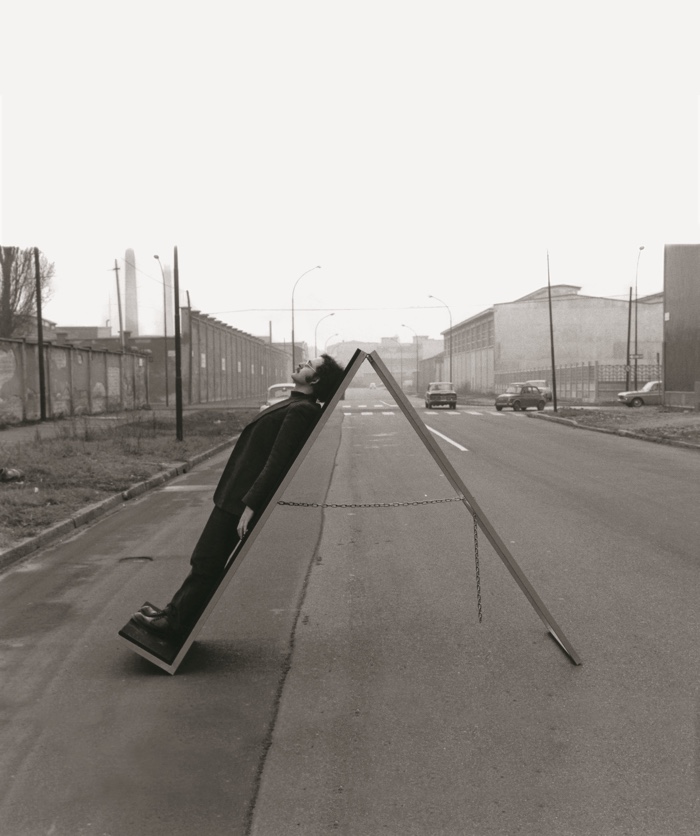 Fortunately, MAXXI has another exhibition to explore if ever you’re in the neighbourhood. It’s not only packed with excellent, provoking works, it also remains open until the end of April. The Street. Where the World Is Made shows the work of artists who look for a public in the streets, not within the sterile walls of a museum or art gallery. They use public space as an environment to exchange, agitate, experiment, debate and set off the unexpected.

The exhibition is organised according to themes: public actions, daily life, politics, the community, innovation, the role of the institution and of course many of the works can easily fit into several categories.

The exhibition is massive. There are over 200 works. Many of them videos which means that i ended up spending a whole afternoon inside the museum. It’s also very noisy and chaotic. Like a busy urban street. 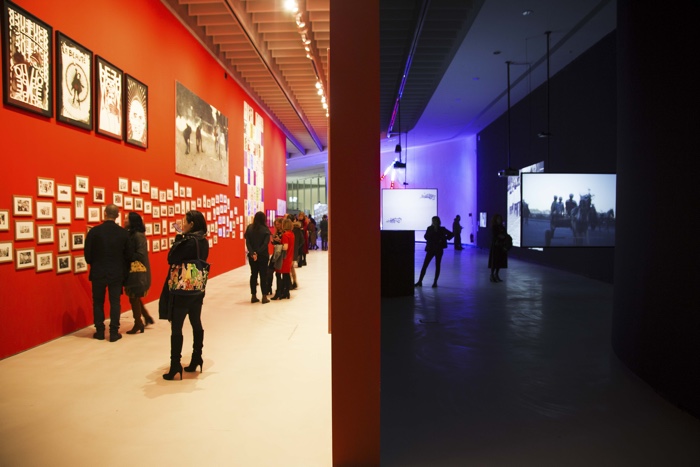 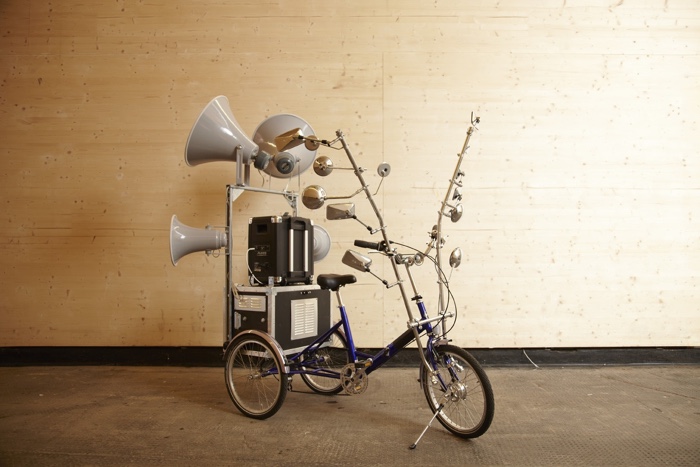 Instead of writing down my usual ultra-verbose review, i’m going to quick fire some of the videos i really enjoyed during my visit. I’m not keen on being bombarded with videos (to say the least) so the ones below are short and quite amusing:

Starting with the one that made me laugh out loud, especially after i had read the description.

During months, Iván Argote walked around New York city looking for unattended police cars. As soon as he found one, he hid behind it and shaked it while his camera was rolling. It looks like some sex or violent action is taking place inside the vehicle. During the making of the film he was stopped three times and managed to not get arrested by acting as a crazy french tourist.

Iván Argote, The beginning of something, 2011

Speaking of crazy. Or at least very bold… Marcela Armas walked at a leisurely pace in the middle of urban traffic in Mexico city wearing a kit with 7 different car horns and other automotive sounds. She used a control on the arm to activate the devices and establish communication with the drivers. Some drivers honked to express their great perplexity, others to participate in a collective concert.

Occupation is an action arising from the occupation of space for car traffic, as a reflection about humans as carriers and noise generators, but also, about the loss of sovereignty of human body in times of consumption society and exacerbated urban growth. 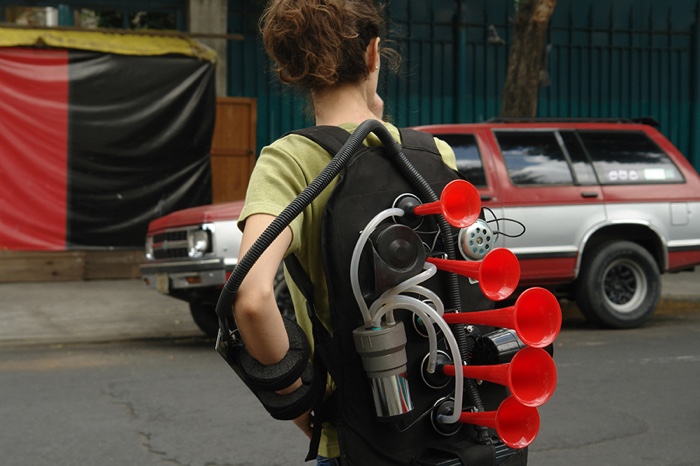 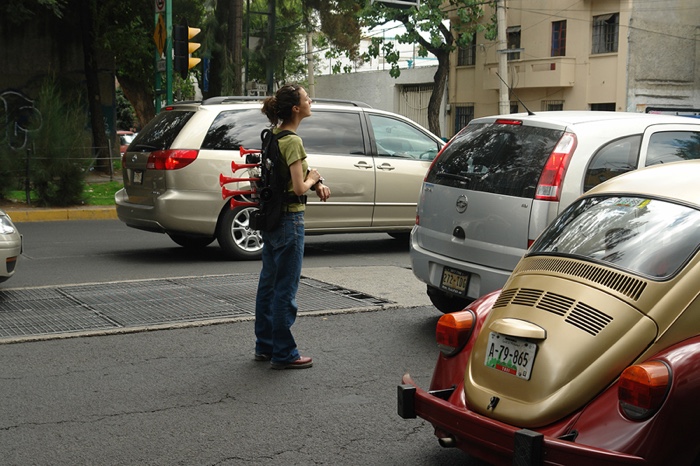 Say what you want about Santiago Sierra, he certainly knows how to get people’s attention. The video he made together with Jorge Galindo was one of the very first i saw upon entering the gigantic exhibition. It could have been swamped by the dozens of video works i saw during my visit. But it did remain in my mind the whole afternoon.

In 2012, one of the worst years for the economic crisis in Spain, Sierra organized a motorcade of seven black Mercedes-Benz sedans topped with upside-down monumental portraits of King Juan Carlos I and the six prime ministers of the Spanish democracy by painter Jorge Galindo. Bystanders, taken by surprise, posted cellphone documentation as the procession was making its way along the Gran Vía of Madrid.

The soundtrack of the video is “Warszawianka“, a song used as an anthem by Polish workers in 1905 and adopted by populist movements worldwide.

In Recife (Brazil), rural traditions are often at odds with the city status as a booming industrial center and film capital. Hearing that the local government was planning to ban animals hauling carts from the streets, Jonathas De Andrade decided to organize a horse-drawn cart race in the city center. The artist was only able to stage the race by asking the authorities for a permit to make a movie. The horse owners, however, were invited to participate in a real horse race. The video features an aboiador—a singer from the countryside who improvises verses and rhymes and talks (in what seems to me the most beautiful language in the world) about the challenges of country living, the dehumanizing urban conditions, marginalization, etc.

Future past perfect pt. 03 (u_08-1) was inspired by a fascination for automation processes as well as Carsten Nicolai‘s work on codes and grids. A man stops his van next to a row of vending machines. He inserts a coin, but instead of the usual procedure, the machine starts performing its own peculiar performance on the notes of one of the artist’s compositions.

Not much is happening in Eric Baudelaire‘s video. Yet, there is something hypnotizing in the movements of the main protagonist and in the uneventful life that surrounds him. The action takes place on a Paris metro platform where a billposter covers an advertising billboard with a sequence of images that depict a car parked on a Parisian street: it bursts into flames, is swallowed up in smoke and then is reduced to a charred carcass. The laborious method of gluing the posters takes 72 minutes in total, a slow pace that contrasts with the assault of violent images that news media typically serve us. 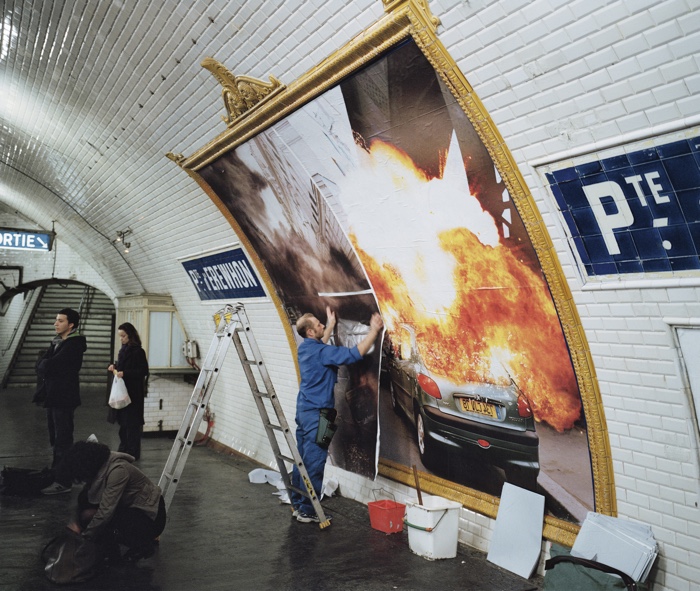 Paradox of Praxis #5 is part of a series of performances in which Francis Alÿs undertakes seemingly futile tasks or labors. The most famous one is Paradox of Praxis #1 (1997) in which the artist pushed a massive block of ice throughout the streets of Mexico City until it completely melted. In this video, however, Alÿs kicks a ball of fire during the night in Ciudad Juárez. As you follow his path, you catch glimpses of a urban fabric in crisis.

In 1995, Lin Yilin quietly built, dismantled and moved a brick wall from one side of a busy road to another. The performance, which took place in Guangzhou, forced drivers to swerve around him. His long and laborious performance transformed a stable wall into a roving one, creating moments of pause in the turbulent flow of urban life.

Halil Altındere’s film Wonderland documents the anger and frustration of a group of youths from the Sulukule neighborhood of Istanbul, home to Roma communities whose houses were destroyed as part of an “urban renewal” development project. Shot as a music video, Wonderland follows the young men of the hip-hop group Tahribad-ı isyan (Rebellion of Destruction) as they rap about inequality and gentrification. They express their exasperation through derelict streets, beat up a security guard and destroy symbols of the redevelopment project. The film was a run-up to the Gezi Park demonstrations, where people protested against the plan to replace Gezi Park, one of the few remaining green spaces in the center of the European side of Istanbul, with a shopping center and luxury apartments.

All kinds of objects are being thrown from one end of a road to the other: rocks, boots, helmets, broom sticks, chairs, a wheel, tires, barrels, etc. Fumes from tear gas start to float over the scene. When the one-sided riot stops, the street appears clear again and then objects are being thrown from the other side of the street this time. It’s beautiful, dangerous, poetic. It happened during our century and all the centuries before that.

That’s it for my video tour. Here’s more images and works from the show: 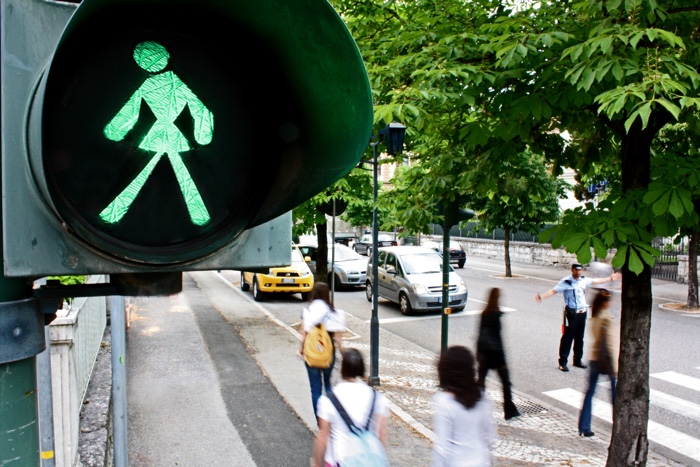 In an 8-hour long action, Anna Scalfi was granted the permission to climb up and change the contours of the figure on the pedestrian traffic lights from male to female in the historical centre of Rovereto. 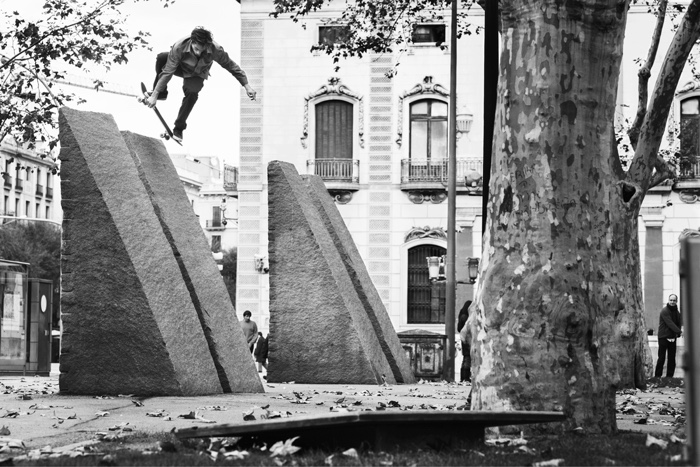 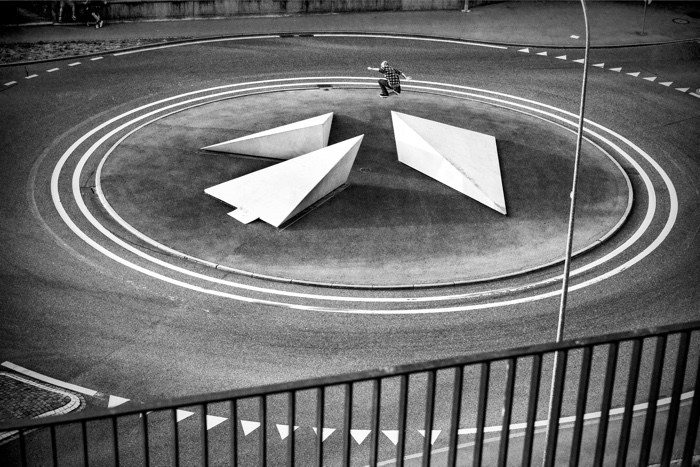 When he was at art school in the late 80’s, Raphaël Zarka realized that skateboarding was guiding his perception of forms, volumes and materials. The black and white photographs from his series “Riding Modern Art” are drawn from skateboarding magazines. Each of them shows how skaters are giving a new dimension to the abstract and geometric forms of modern sculptures installed in the public space. Since it started in 2007, the series has become a huge participative work to which several photographers and skaters contribute. I found it interesting to read that when Editions B42 published a book about the work, ten images had to be removed from this collection, “as sculptors have refused to see their artwork reproduced. The spaces dedicated to those photographs remain purposely empty.” 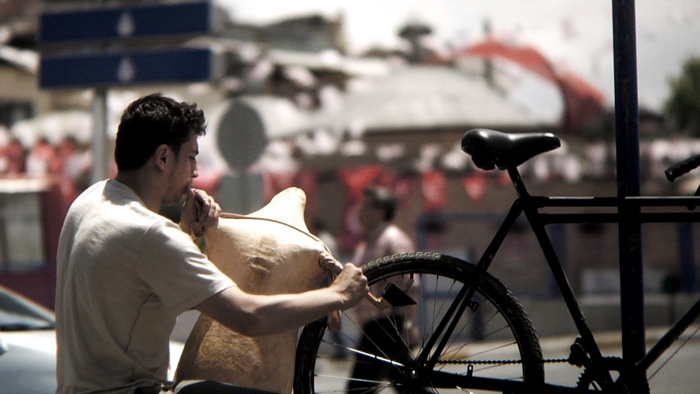 Allora & Calzadilla, There’s More than One Way to Skin a Sheep, 2007

In There’s More than One Way to Skin a Sheep, Jennifer Allora and Guillermo Calzadilla evoke the coexistence of modern technology and traditional instruments such as the tulum, an early form of bagpipe from Turkey. The video shows a cyclist repurposing the traditional musical instrument to inflate a punctured tire on the streets of Istanbul, creating a noisy disruption in the urban landscape. The cultural object, used as an implement to address a modern malfunction, represents a resourceful adaptation to today’s world. 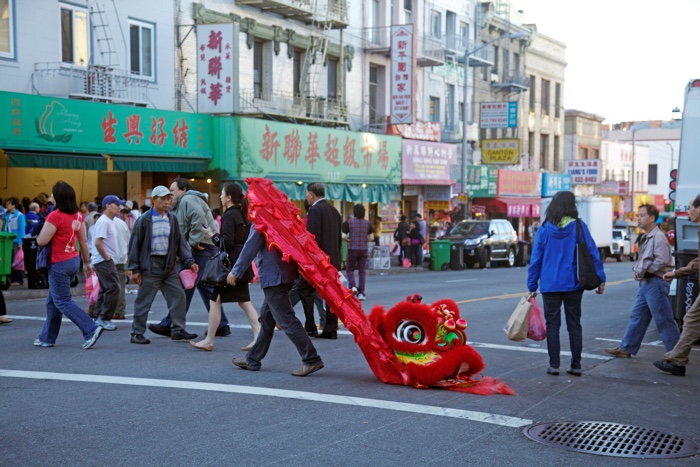 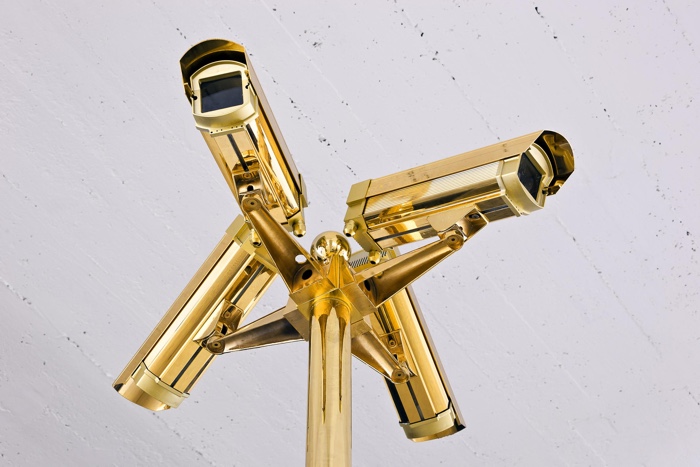 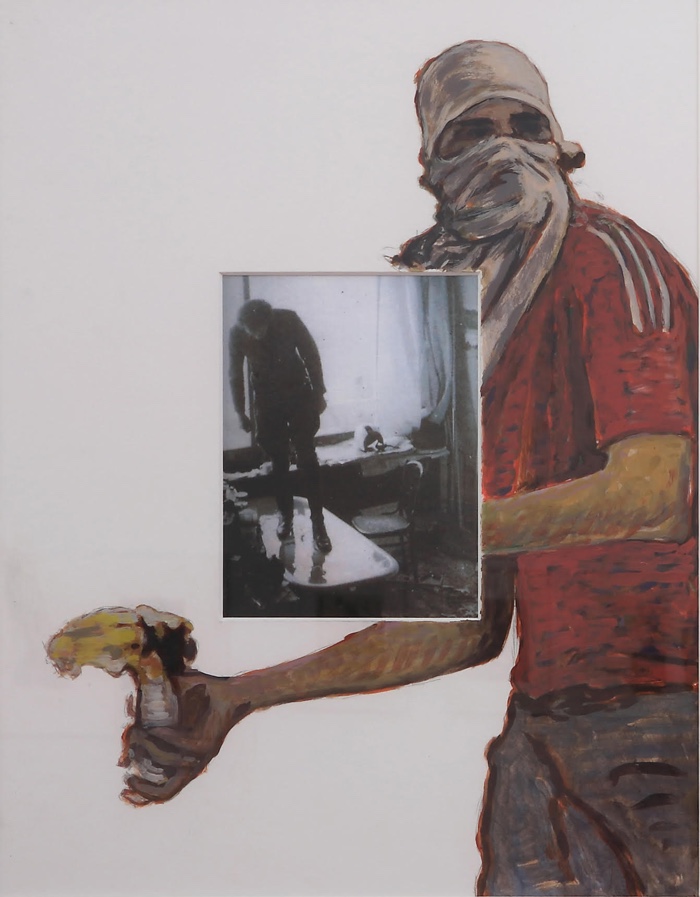 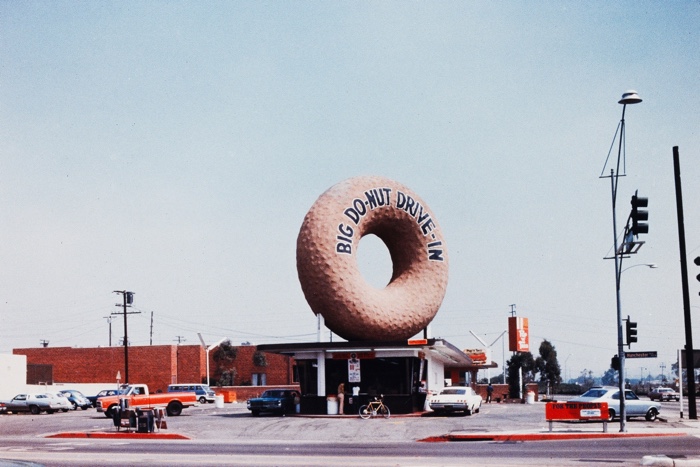 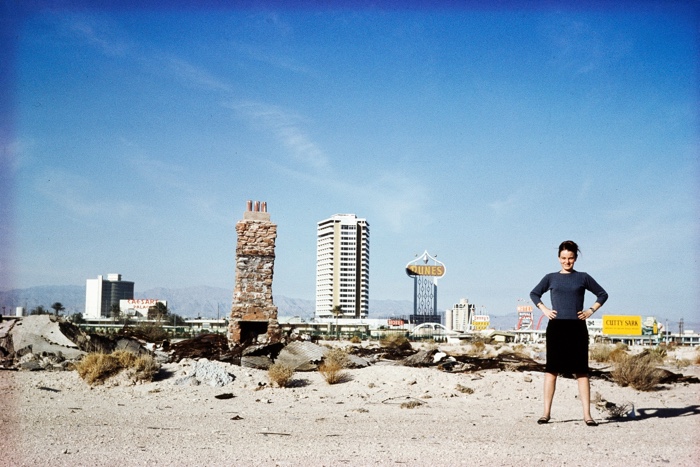 Venturi Scott Brown and Associates, The Strip seen from the desert, with Denise Scott Brown in the foreground, Las Vegas 1966. Photo: Robert Venturi. From the “Las Vegas Studio”-project curated by Hilar Stadler and Martino Stierli 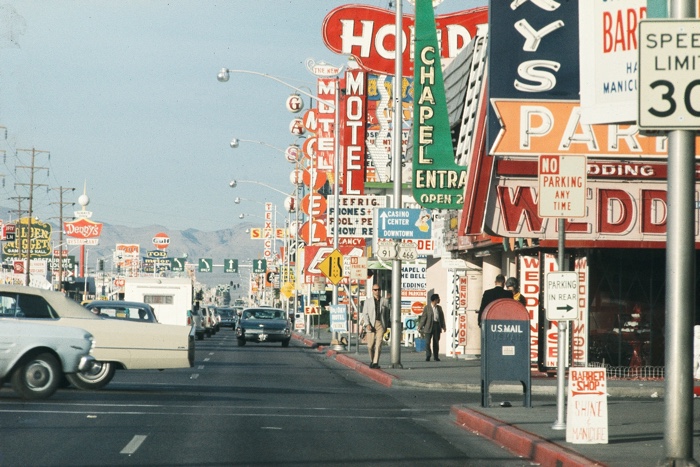 Venturi Scott Brown and Associates, Advertising signs on the Strip, 1968. From the “Las Vegas Studio”-project curated by Hilar Stadler and Martino Stierli 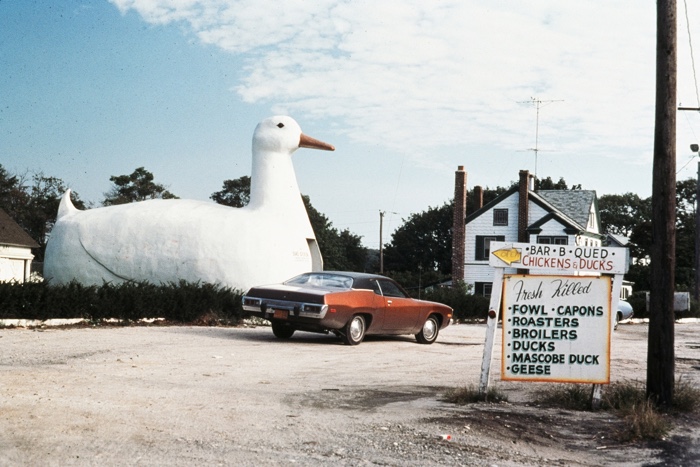 Venturi Scott Brown and Associates, «The Big Duck», shop in the shape of a duck on the highway on Long Island, Flanders, New York, ca. 1970. From the “Las Vegas Studio”-project curated by Hilar Stadler and Martino Stierli 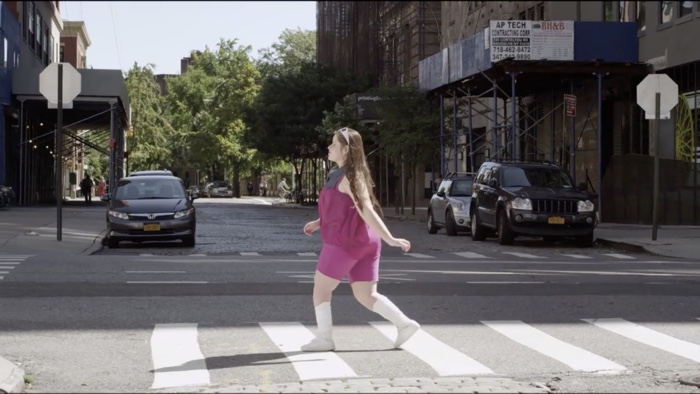 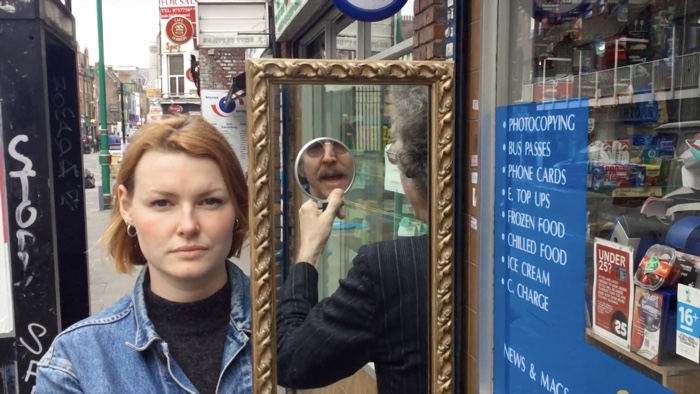 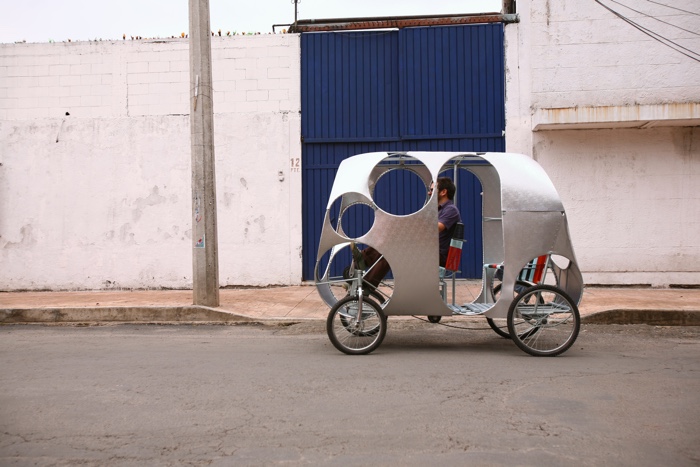 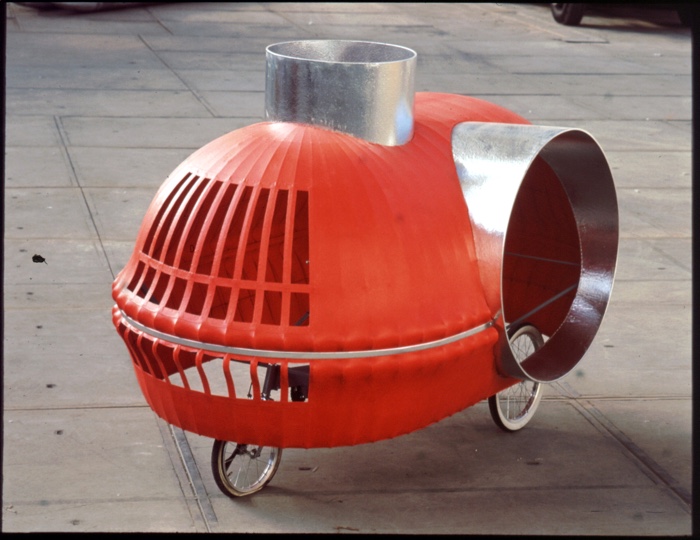 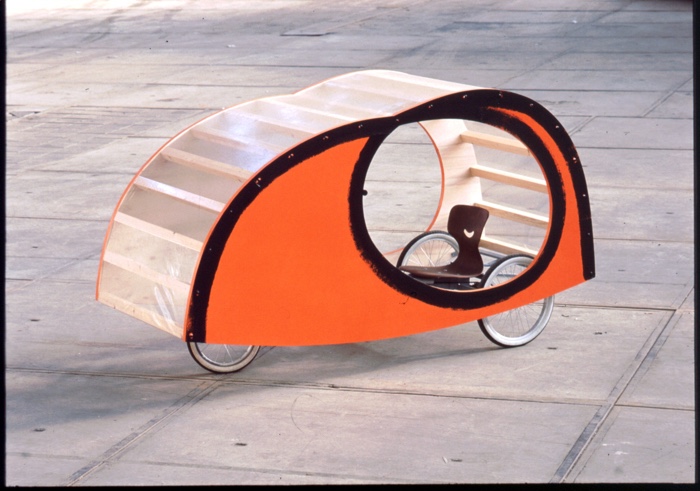 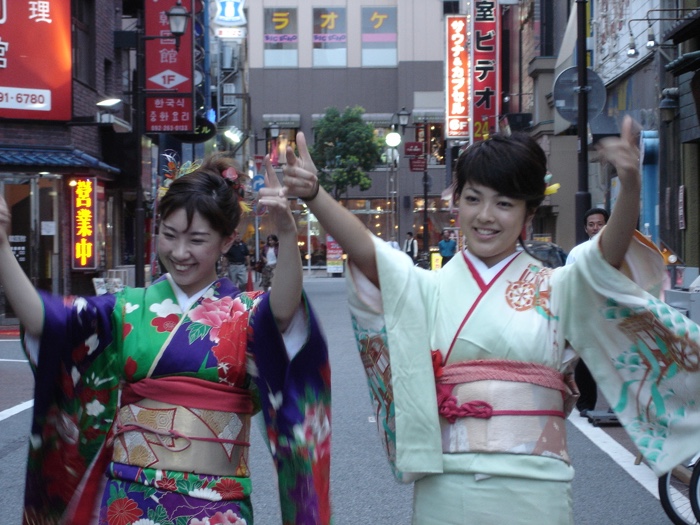 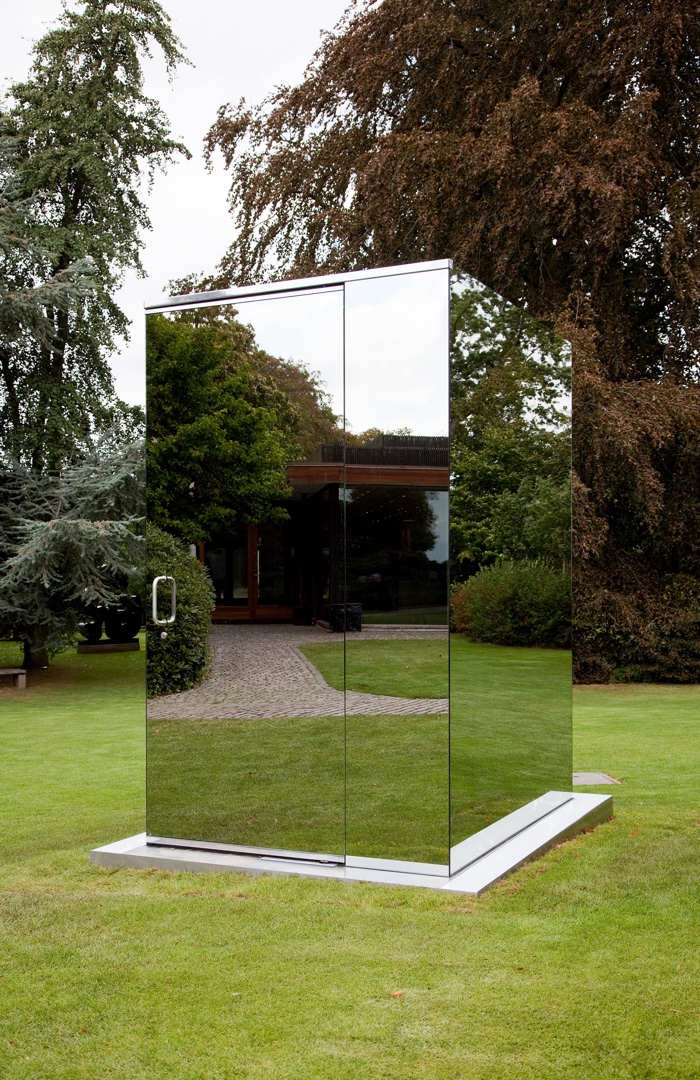 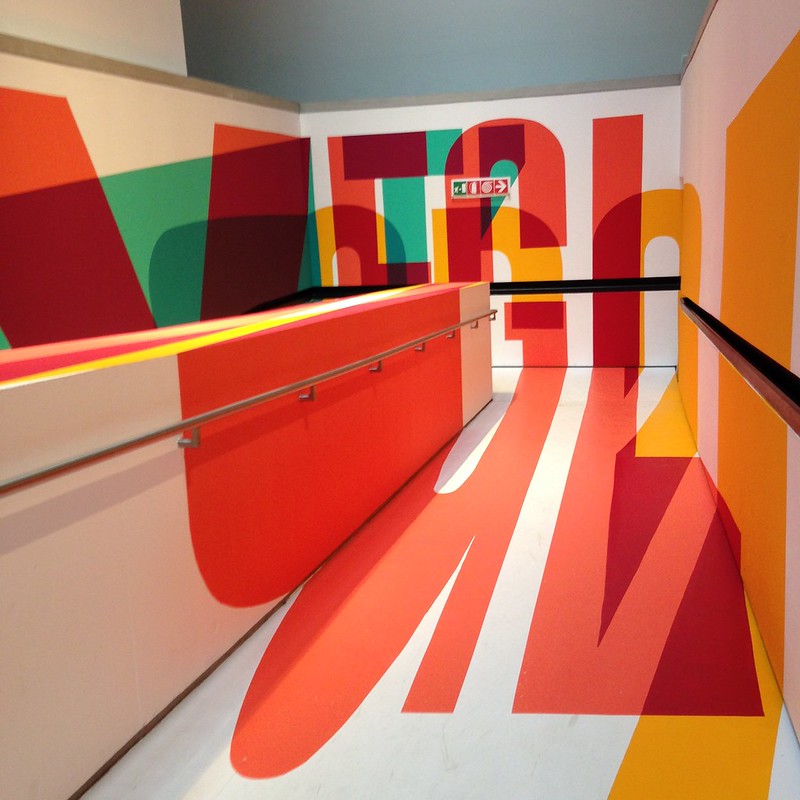 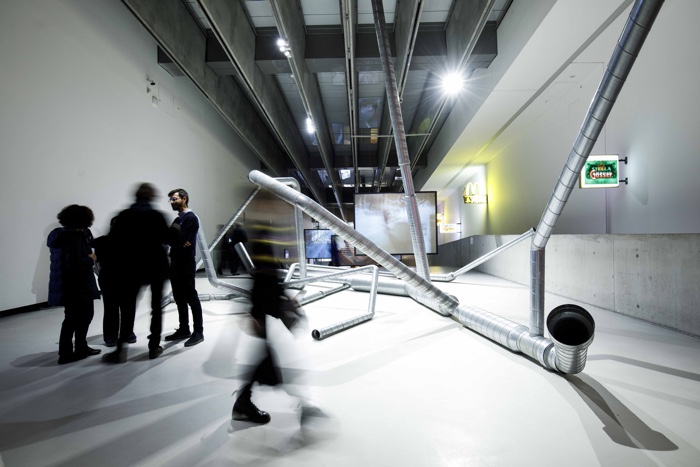 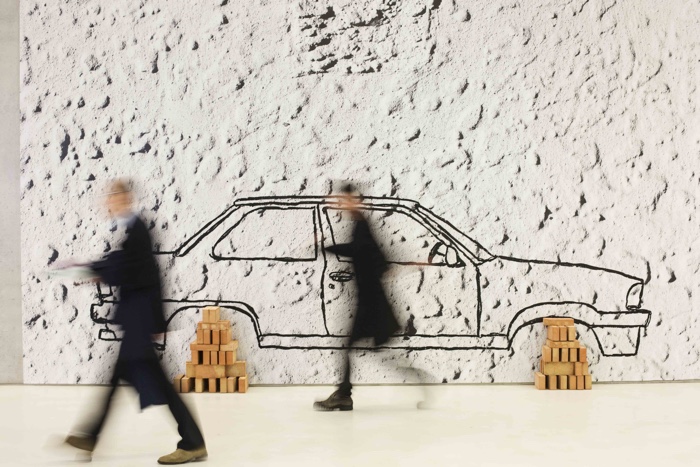 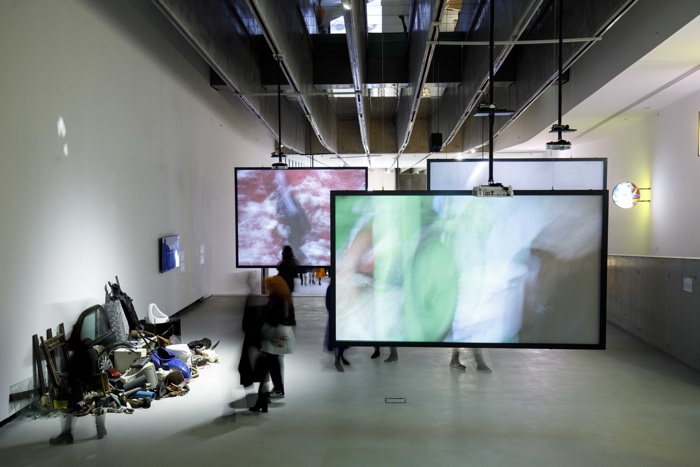 The Street. Where the World is Made/La Strada. Dove si crea il mondo was curated by Hou Hanru and the curatorial team of MAXXI. The show remains open until 28 April at MAXXI in Rome.