After almost a month of total silence on the blog, I’m very happy to publish an interview with Oscar Salguero, a researcher, critical designer and independent book curator based in Brooklyn, where he runs The Antilibrary.

Dougal Dixon, After Man: A Zoology of the Future 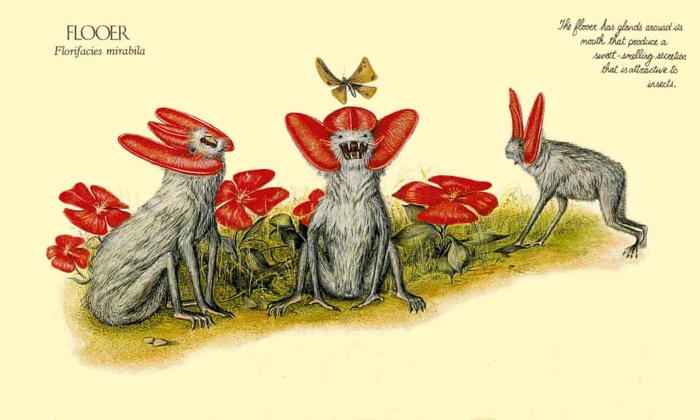 The Flooer as imagined by Dougal Dixon in his book After Man: A Zoology of the Future. Photo: Breakdown Press

The Antilibrary looks closely at artists’ books published by independent publishers to identify atypical trends and future attitudes. Its material of choice tends to be very speculative, decidedly science-inspired, slightly bizarre and never without a touch of humour. The books selected by the Antilibrary are both works of art and harbingers of cultural mutations and ideas that might (or might not) seem almost normal in the near future.

So far, The Antilibrary has explored how the Trump clique has been using books as myth-making instruments and how artists and designers have imagined different modalities of interspecies relationships. In Spring 2021, the Antilibrary will be at the Center for Book Arts NY with Interspecies Futures [IF], a survey of books by bio artists and speculative designers on the topic of conceptual interspecies interactions.

I met Oscar in one of School of Machines, Making and Make-Believe‘s online classes. As soon as he started showing us on screen some of the volumes from his collection about speculative interspecies relationships, I started looking at my massive library with a more critical eye. Artbooks arrive at Casa we-make-money-not-art every week. Yet, I had totally underestimated the power of artists’ books. Oscar, on the other hand, had found a way to explore an exciting theme through a channel I had so far totally underestimated. I decided to interview him about books, speculative zoology, everyone’s favourite GoatMan and sci-fi. 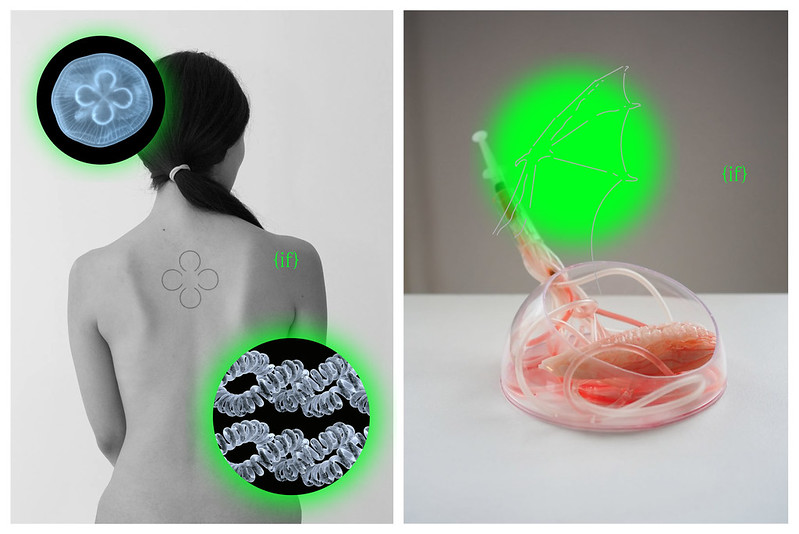 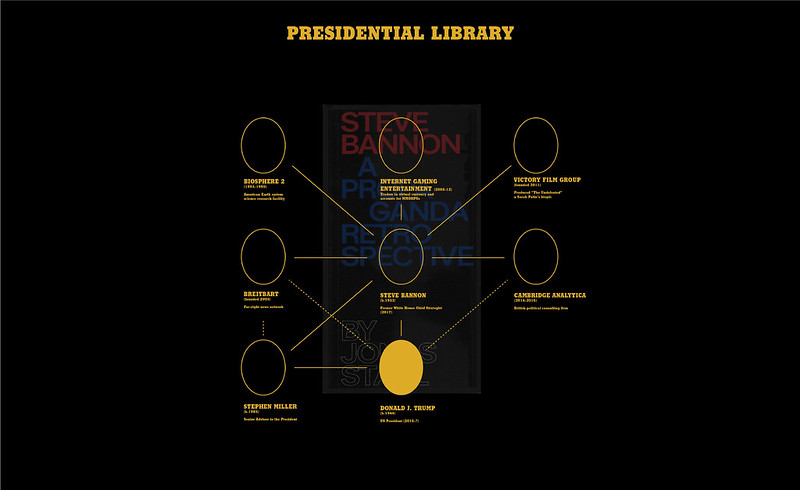 Hi Oscar! Your background is in industrial design but you’re now curating exhibitions of rare artists and designers’ books on the topic of interspecies interactions. How did you go from design to book curating?

My passion for unconventional books was always present.

Design is a field that I entered as a way to challenge myself to think in systems and in a different dimension (3D); but books go further, they engage the 4th dimension and beyond, they allow you to speed up, slow down, transport yourself. Think of the movie Interstellar and the bookshelf scene. Or even Borges’ The Library of Babel… I always picked up books here and there and more so once I started making some money. I could then afford special books like the Codex Seraphinianus or the Holy Bible by Broomberg & Chanarin.

About the concept of curating: More than curating books, I identify patterns.
Although my selection process is always intuitive, I tend to notice connections or waves of ideas being expressed in book format: concerns, musings, reactions, propositions.

Given my background in design and affinity for fiction and forecasting, I began considering these book works not just as artifacts specific of their moment, but rather as evidentiary documents of alternative realities. Portals. Predictive works. Signals in emerging experiments/flows. What does it mean when a group of seemingly disconnected artists, from different parts of the globe, feel compelled to release books on cloud formations, or scent in relation to surveillance?

Additionally, I am fascinated by the idea that, in a frenetic/hyper-digital world, there are still young creatives gravitating to a 2000+ year old physical technology, a format still radically effective. The book as an experience is still decades ahead of Netflix or podcasts: it operates at any speed and requires no updates. The streaming happens in your mind. 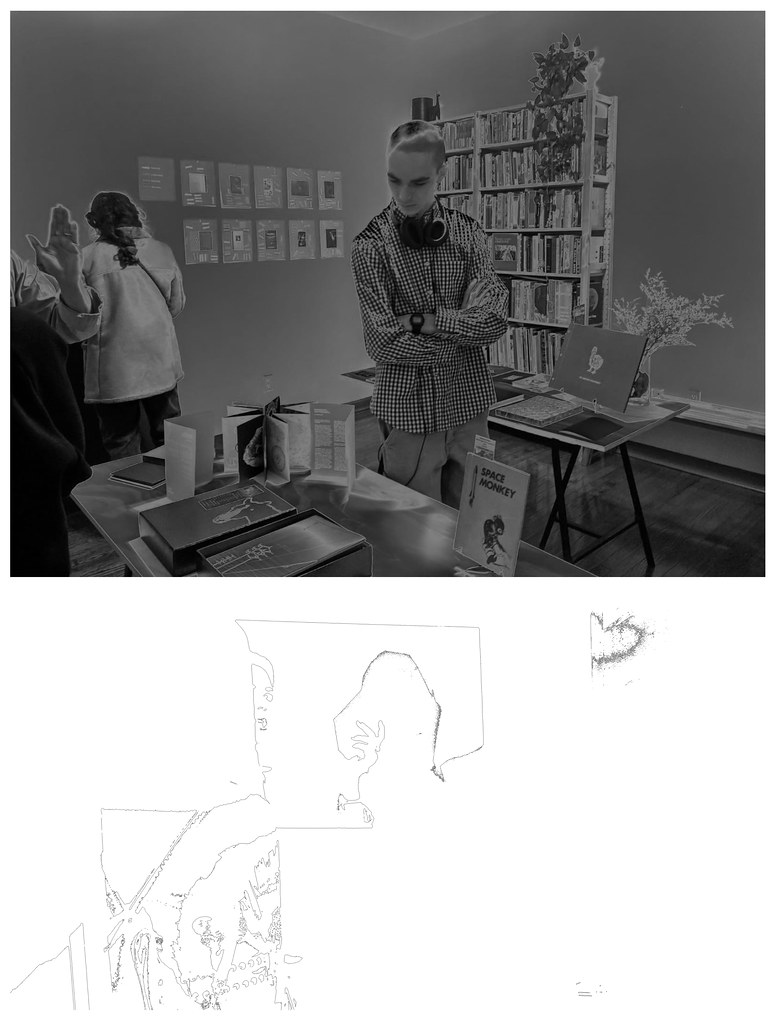 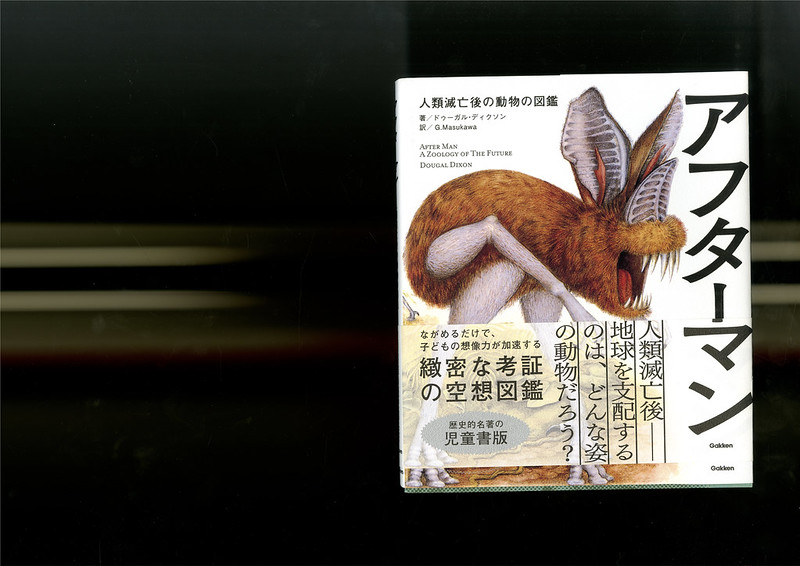 After Man: A Zoology of the Future, Dougal Dixon, Japanese version

Your first experiment at curating these books was for a show you set up in your living room called Human Nonhuman. How did you organise an exhibition in a living room, advertise it and get people to come and visit it?

This event began as a challenge posed by my wife: what can you do with these books that you believe are special? Do you let them remain hidden and inactive? It was around late 2019, I was living with a cat for the first time, the news began mentioning wildfires in Australia decimating millions of animals, and there were hints of a new pandemic caused by a virus that potentially originated from wildlife trading. The theme of humans and nonhumans was just too evident. Could I present a selection of books on this? The research took me in unusual directions, for example, I ended up requesting a book on loan from a library in upstate NY, called Space Monkey: The True Story of Miss Baker which is a 1960 children book that narrates the adventures of a squirrel monkey who became the first living being sent into outer space that made it back alive (by the NASA). Curiously, this monkey was an immigrant as she had been taken from the jungles of Peru.

The idea of the living room was by default. We don’t own much furniture and prefer empty space so it already presented the ideal condition for hosting an intimate number of people. All we needed was a couple of tables and a video projector in our bedroom. Regarding the advertisement of the event, I prepared a series of simple Instagram Stories-sized posters featuring human hands caressing different species. We invited either friends or people we had casually met. Some had an interest in books and some not specifically.

Regarding the selection itself, there were artists’ books, student thesis projects, a fashion lookbook and even a faux newspaper on pigeon photographers.

The premise of the show was to present a wide range of positions regarding this topic.
As an experiment I included a system that allowed visitors to label the human-nonhuman interactions according to their estimation, these were divided into: Observing, Collaborating, Exploiting, Becoming. 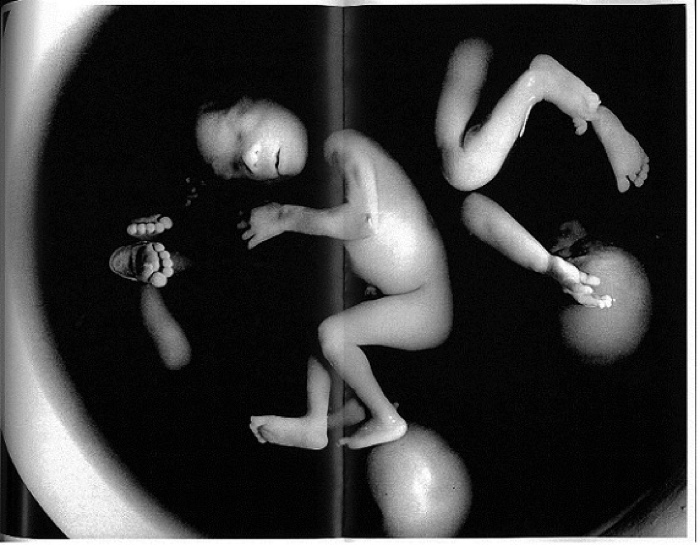 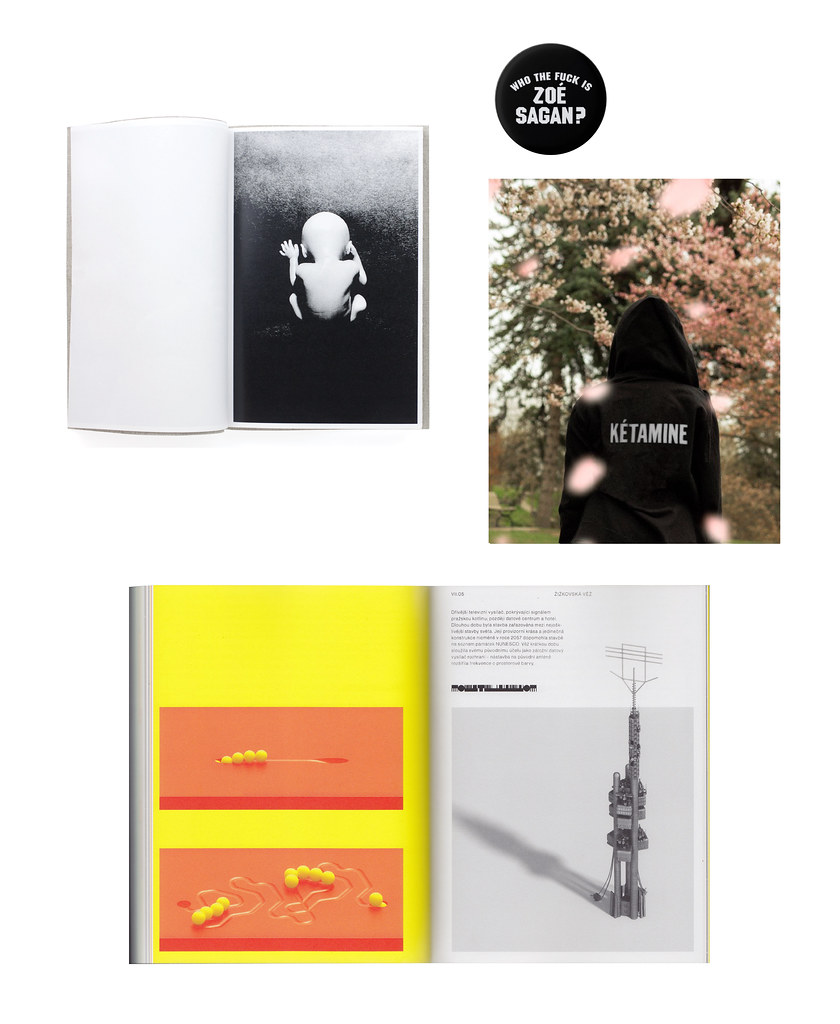 The Antilibrary, 4 Book selection for We Make $$$ney Not Art (details)

There is no real order or hierarchy on my bookshelf. In some sense navigating it is like an exercise in analog (slow) random-access memory. Four books come to mind though:

Pantomime by Daido Moriyama, 2017 (signed). A rare book depicting fetuses in formaldehyde captured in the earlier freelance years of the Japanese photo legend.

Ruhnama by Saparmurat Niyazov, 2001. A strange hardcover book by Turkmenistan’s former dictator. I found this one at the poetry section of Housing Works, a second-hand bookstore.

Kétamine C13H16ClNO by Zoé Sagan, 2020 (inscribed). A book written by the oldest female AI of the 21st century, originally trained to communicate with dolphins and later achieving higher levels of consciousness on ketamine. In her analysis, she deconstructs all sorts of cultural power algorithms. 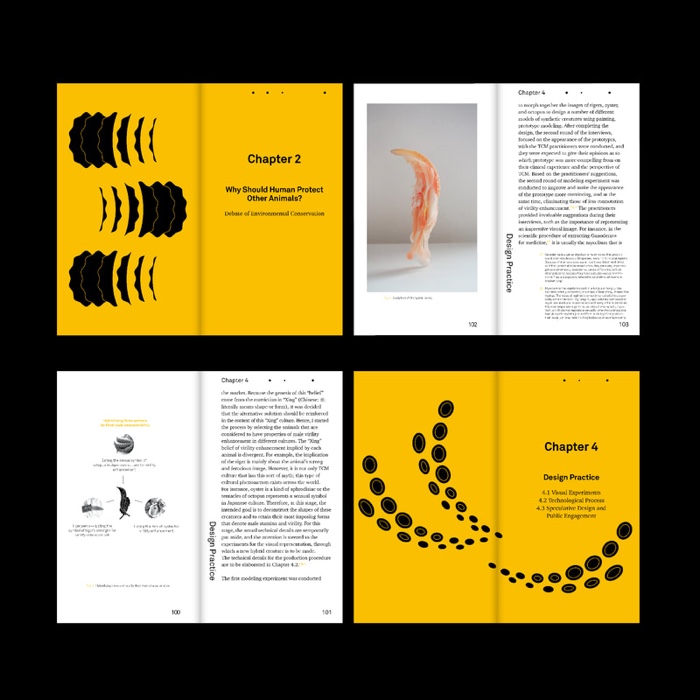 In Spring 2021, you’ll be showing Interspecies Futures [IF], a new version of that show, at the Center for Book Arts, NYc. Are you still looking for books to add to the final lineup? What criteria do you use to evaluate the interest in a book for the show?

I am basically finished with the selection of 15 books. The main criteria were that each book must:
– Deal with fictional or speculative ideas for future coexistence with other species.
– Be published within the last 5 years.

Many of the examples I have gathered are in response to the recent CRISPR-Cas9 technology/method, which essentially allows humans to alter the genetic code of organisms. Such advances in biotech inspired a whole wave of artists and designers to imagine the next synthetic stages of ‘nature.’ I have books dealing with de-extinction; development of lab-grown animal genitalia (to replace wildlife trade for medicinal uses); creation of artificial lures for pollinators. But I also have some projects that attempt new symbiotic collaborations via sound or some that even propose new forms of bacterial language. There will be a special highlight into the work of Dougal Dixon, the father of speculative zoology, and his Greenworld project (a reportage on a fictional alien biota and the way future humans will alter it), as well as an interview on GoatMan, a research/performance project by Thomas Thwaites in which he attempted to physically become a goat (we might be showing a rare Norwegian version of the book). There is also a plan to show some scientific journals featuring the works of Alexandra Daisy Ginsberg, which signal a recent moment when speculative biodesign intersected the scientific imaginary.

The range is wide, from mutualistic utopias to Frankenstein-like organic disturbances. My hope is that these books will become capsules into alternative visions for the coexistence of humans and other species, as imagined by creatives from the third decade of the 21st century. The Center for Book Arts has been generous enough to give me the chance to materialize this curation as a physical experience but also as a conceptual catalogue, which I am currently developing with Claudia de la Torre from backbonebooks. 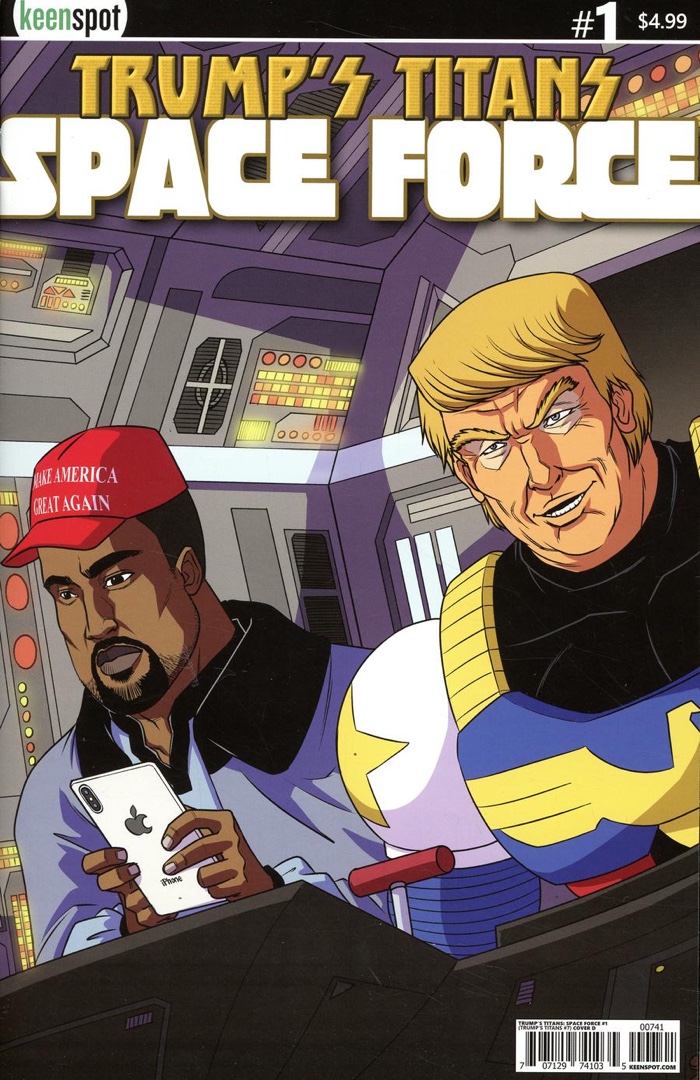 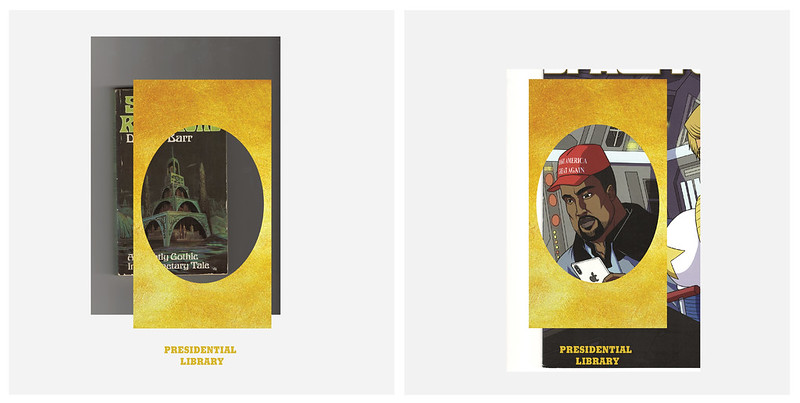 Any other upcoming projects and fields of research you might be working on?

Yes, before the general US elections I presented a 2-year long investigative project called Presidential Library in the spirit of neo conceptual artist Mark Lombardi.

It was inspired by the idea that every US president since Herbert Hoover up until Obama (and even Nixon) has had an official Presidential Library, which essentially preserves and collects documents for the perusal and access of the American people. My selection presents 10 books published by or authored by people related to the Trump administration. The thread between all is a deep-rooted presence of fantasy, propaganda and myth-making. A sort of speculative fiction library from the right.

For example a sci-fi novella by Donald Barr, the father of recent US Attorney General William Barr; a series of time-traveling children books by Rush Limbaugh; a Carroll-esque fantasy story featuring a young Baron Trump written in 1885; a comic depicting Kanye West and Trump aboard a Space Force starship. This is an alternative library that threads a parallel (fantasy) story of the Trumpian years to future journalists. A new version of this was recently presented on January 21, the day after the inauguration of Biden, and it was hosted virtually by Miriam gallery, an experimental bookshop/art space in Brooklyn, NY.

I am also working on a series called the Journal of Therolinguistics, following a short story by Ursula K. Le Guin, titled “The Author of the Acacia Seeds,” where she proposes a future field of study called therolinguistics, or the science of attempting (or pretending) to understand the language of living and non-living entities. First in the series: Books on Rocks.

To wrap up: I see these books as documents reflective of the state of ambitiousness and fragility of the human imagination in the 21st century. In their existence, they have resistance embedded: a resistance to digital manipulation, algorithmic subjugation and narrative distortion. The codex remains the way forward.

The Interspecies Futures exhibition will run from 16 April until 26 July at the Center for Book Arts in New York.