The Moon barely has any atmosphere. The average temperature on Venus is 462 degrees Celsius. You can’t even breathe on Mars. And yet, space represents the new El Dorado for many nations and private companies. Asteroids mining, intergalactic trips, Moon bases, human settlement on Mars, orbital/suborbital/lunar space tourism, etc. Nothing is too bold, too expensive, too technically-challenging. 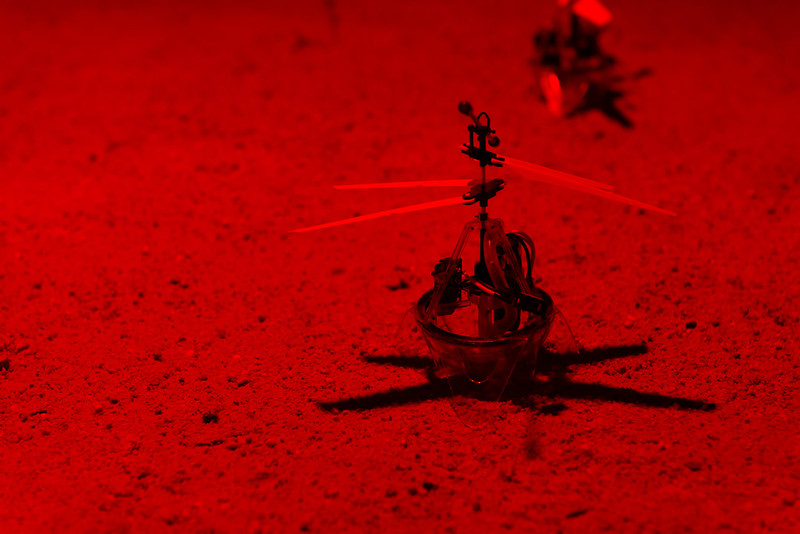 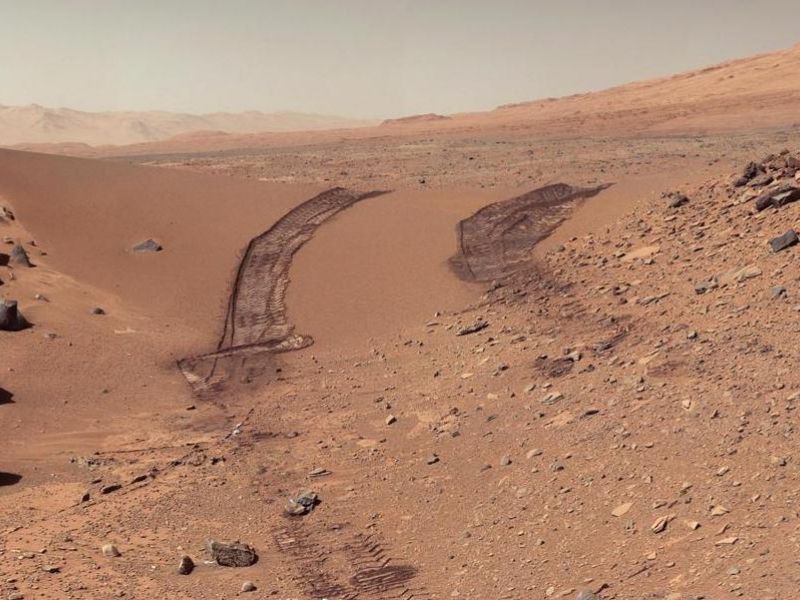 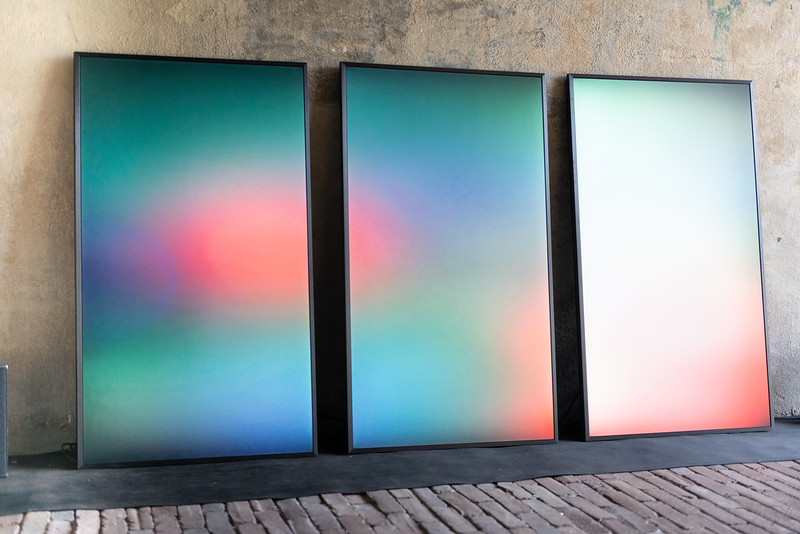 The Supre:organism exhibition which closed recently at Kunstfort bij Vijfhuizen (a Unesco World Heritage fortress near Haarlem in the Netherlands) cast a critical eye on human space ambitions, investigating the influence that space exploration has on the development of technology, life sciences and industrialisation. Even on our own identity.

Packed with fascinating information and meditations on space exploration, the exhibition could have been yet another cultural celebration of the 50th anniversary of the first humans landing on the Moon. Fortunately, it managed to stand apart from other events by presenting a multiplicity of artistic visions that “expand our perspective on human non-terrestrial becoming” and remind us that extraterrestrial colonization is motivated not only by scientific research but also by geopolitics schemes, economic exploitation, military strategies and yearning for another world.

Quick walk through some of the works exhibited: 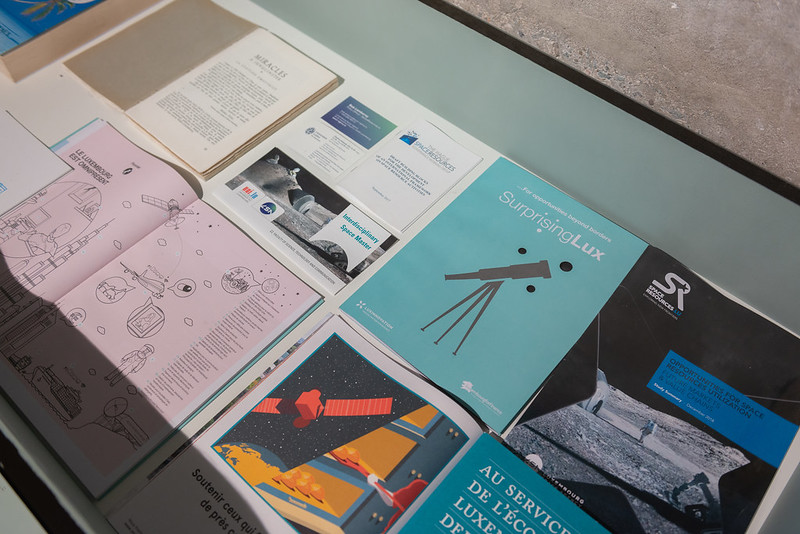 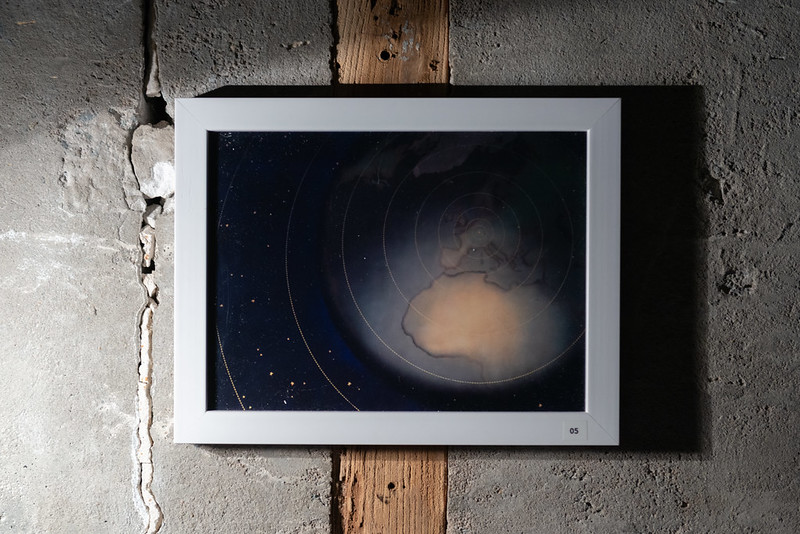 One of the objects exhibited by RYBN is a book with a promising title: Guide Chambost des paradis fiscaux (Chambost Guide to Tax Havens.) At the bottom of its cover is a sentence that reminds us that “tax havens are on Earth, not on the Moon.” Luxembourg’s ambition to become a leader in asteroid mining might bring some nuances to that statement.

In early 2017 Luxembourg announced its intention to become the European hub for the mining and extraction of space resources. The program would help private companies exploit resources from the solar system’s asteroids. Gold, silver, platinum and other metals would be transported back to Earth to be refined, whilst other common group metals would be used directly for construction in space.

There’s just a tiny snag: the 1967 Outer Space Treaty that decreed that outer space, including the moon and other celestial bodies, “is not subject to national appropriation by claim of sovereignty”. The Grand Duchy tried to circumvent the treaty by passing a law stating that Luxembourg-based companies have the legal right to appropriate the resources they dig up in space.

The video above, which was part of Luxembourg’s SpaceResources Initiative communication campaign, suggests a bright near future characterized by both the preservation of the resource-hungry Western lifestyle and a guilt-free solution to the climate crisis.

For some experts, the plan to mine asteroids is just another techno-chauvinist solution to the problem of the overexploitation of natural resources (mineral resources included), an irresponsible, short-term strategy to plunder what is left to be plundered. Others see it as an act of environmental protection, a responsible way to obtain the resources we need without further damaging the Earth.

However, what motivated RYBN’s artistic investigation was the desire to understand the reasons behind the microstate’s sudden entry into the space mining race alongside the United States, China and Russia. The research project is part of RYBN’s wider investigation into tax havens. The Luxembourg chapter of RYBN research has, as they write, “opened up an offshore maze, from the European district of Kirchberg in Luxembourg City to lobbies in Law Schools of Leiden, the Netherlands, and offshore companies registered in Delaware. The project sheds a crude light on the negotiations around space governance that happen today far from the eyes of the general public.”

Along with the SpaceResources Initiative video, the work exhibited included a series of documents such as agreements, posters, archive materials, books and other items that, taken together, tell the story of how a country, hit by the 2014 Lux Leaks scandal, is trying to reinvent itself and present the face of a modern nation with a diversified, forward-looking economy. All the documents and objects are laid and hung there for visitors to explore and draw their own conclusion from. 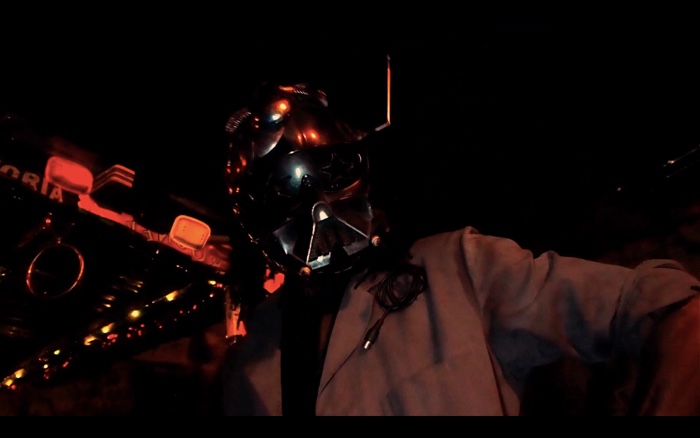 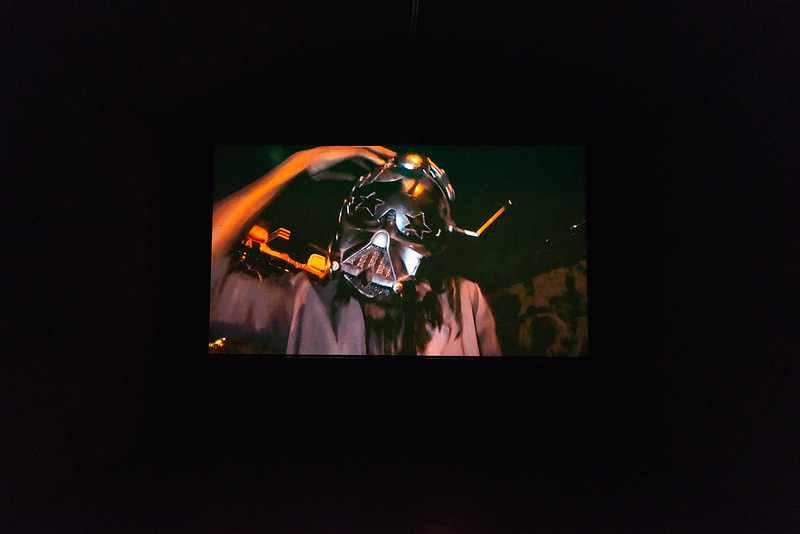 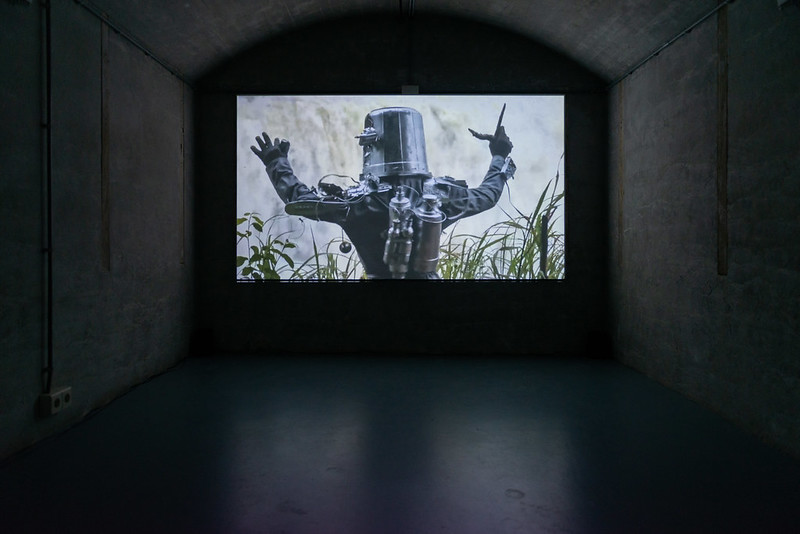 To visit the show, i had to take a bus at 3am. When i saw the videos of the Kongo Astronauts i knew the all-nighter was worth it. The works show mysterious individuals wearing mask or a full aluminium astronaut attire wandering around Kinshasa and its surroundings, carving themselves a parallel universe, navigating their land as if it were a vast space station.

It’s poetical, rowdy, intriguing and visually seducing. The images mix together the sublime beauty of a country, its struggle to deal with the constant violence imposed on its landscape and people (since and beyond colonial times) and the chaos of urban life. There are dreams of a different future and nods to traditions. What makes the work of Kongo Astronauts particularly interesting is not just its visual power, it is also the way the artists use fiction for postcolonial criticism, for representing a country that foreign powers devastate in order to obtain the mineral resources crucial for space exploration and pretty much anything we associated with our modern, hyper-connected life.

Behind the camera of Postcolonial Dilemma Track #04 Remixed is Eléonore Hellio, an artist and the co-founder of KA. On screen is performance artist and designer Michel Ekeba (who, i read, makes his space suits with old electronic circuits full of coltan), musician, performance artist and inventor of musical instruments Bebson Elemba and artist Danniel Toya. 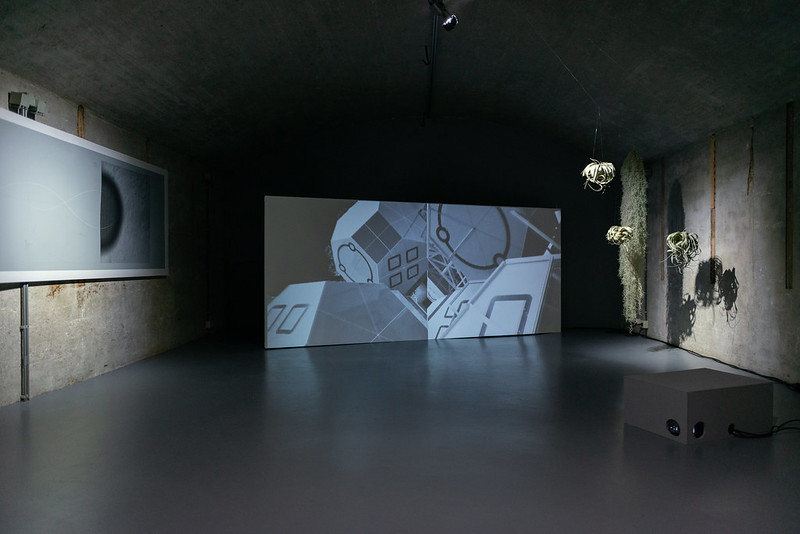 Traveling beyond the solar system could take astronauts on a journey that lasts for decades or even a century. Such an adventure would require an entirely new type of spaceship.

The transdisciplinary TU Delft UStarship Team (DSTART), led by Angelo Vermeulen, is working on the concept of a vessel capable of traveling over ultra long distances for ultra long periods of time.

They propose to create adaptive systems that unite the biological and technological. The large-scale animated video demonstrates how the vehicle would undergo independent, organic growth in space during its journey.

The ship would behave like a living organism that uses raw materials available in space, such as asteroids which could be mined for building materials and fuel, 3D printers would be taken on board to print any new parts necessary to repair or expand the spaceship and a growing ecosystem that would ensure human subsistance. Human waste would be broken down by bacteria and converted into nourishment and CO2 for plants, which in turn, would provide oxygen and food for the astronauts. The European Space Agency is currently developing a similar self-supporting closed loop system with the MELiSSA project. 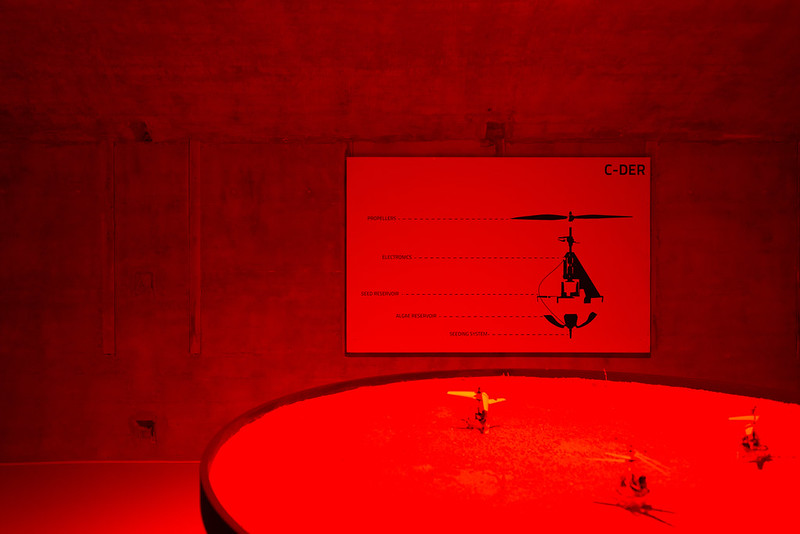 Ivan Henriques is interested in the uneasy balance between technology and nature. Most of the time, in order to create technology, we have to destroy our environment. We’ve done it time and time again on Earth. Are we going to make the same mistake on other planets we might visit and inhabit one day? What is the point of terraforming other planets when we can’t even take care of our own? Could we develop machines that would benefit from ecosystems but also give something in return?

The tiny C-DER drones are what Henriques calls bio-machines. They harvest energy through photosynthesis in micro-algae. Their purpose is to restore endangered environments on earth or to stimulate the creation of an atmosphere on other planets via an integrated system that releases seeds as the drones hop over the (terrestrial or extraterrestrial) land. The speculative project imagines that, over time, the seeding would change the atmosphere. Endangered regions on Earth would perhaps heal. Infertile ground on other planet would eventually be covered with plants.

The project is part of a broader research called Symbiotic Machines for Space Exploration that aims to create an autonomous system for enhancing terrestrial ecosystems and facilitating atmospheric formation on other planets through artificial photosynthesis. 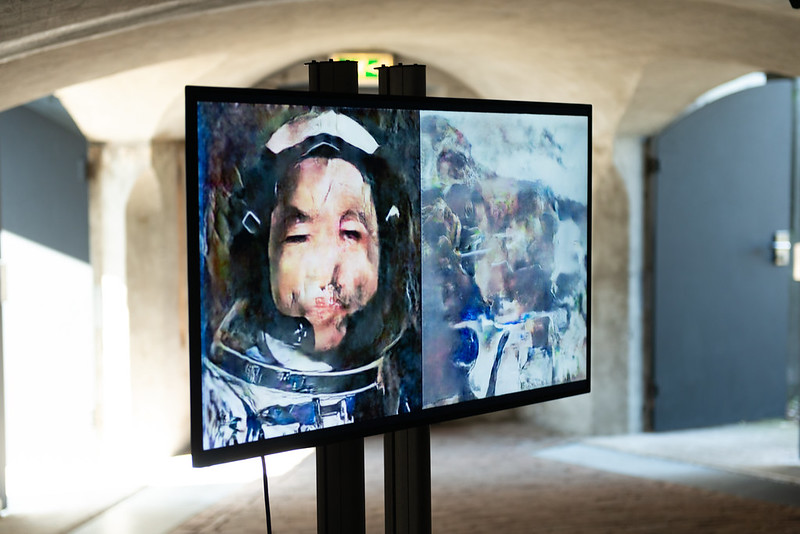 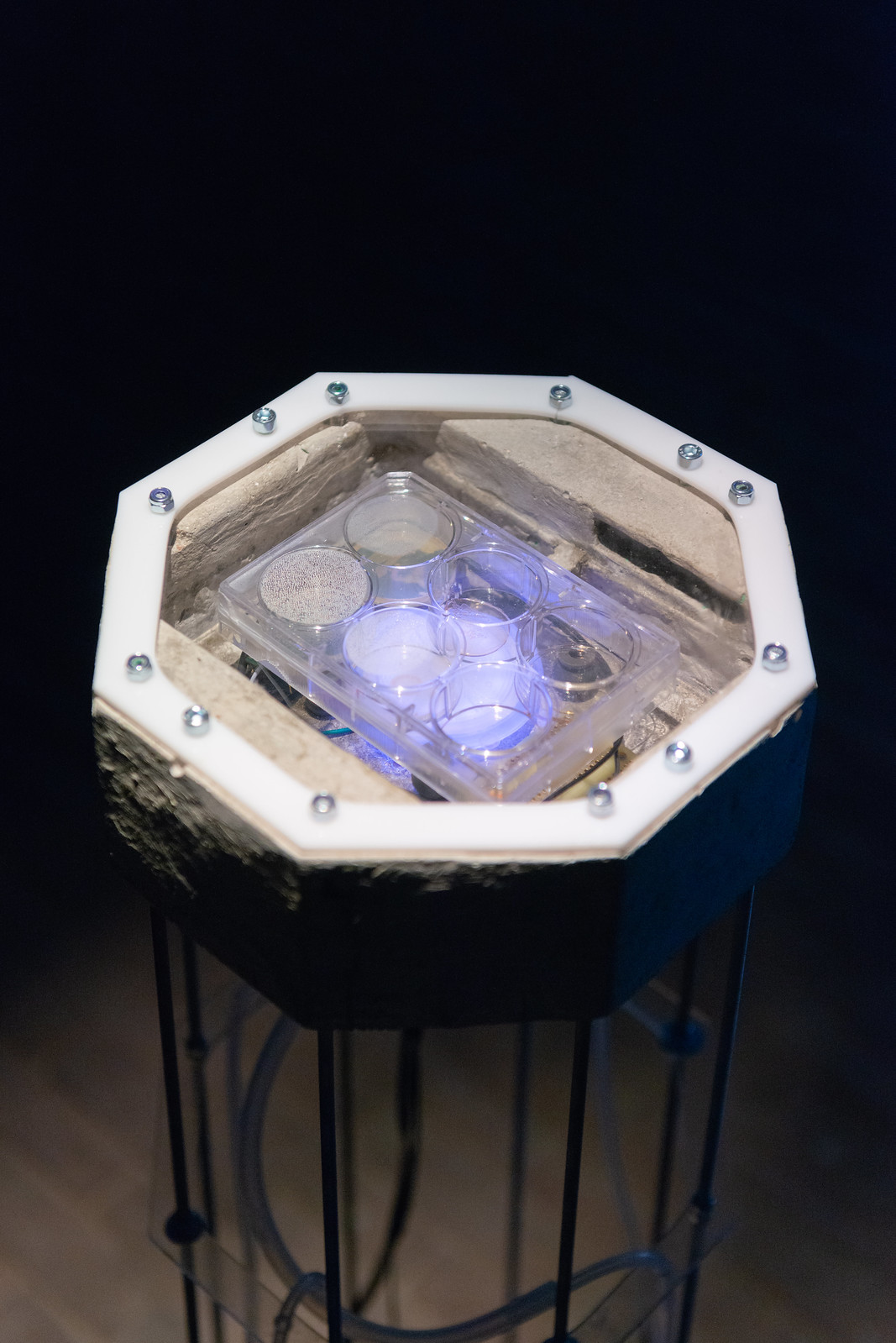 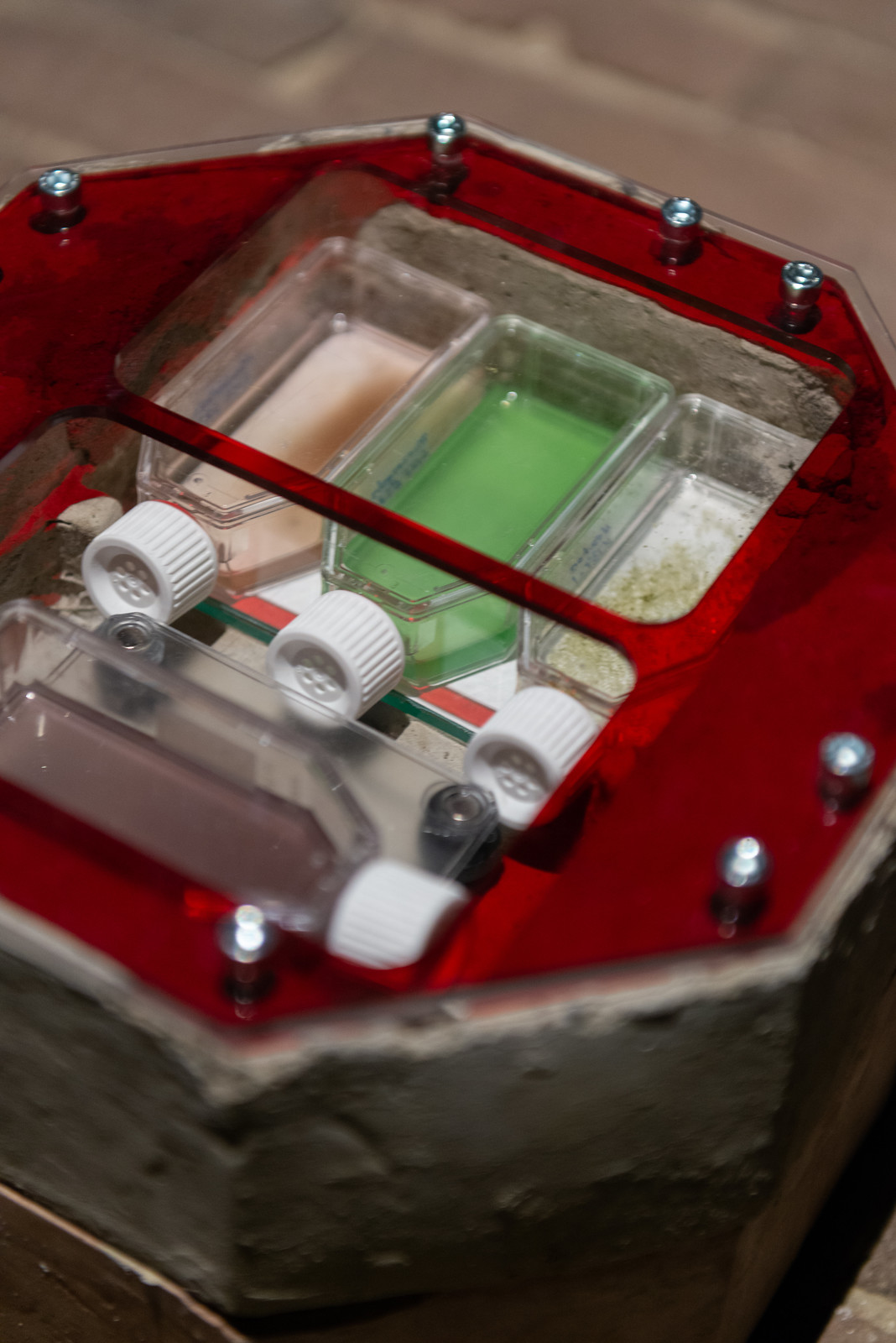 As he recently explained in an interview with Rianne Riemens, Antti Tenetz uses art “to explore what it means to be human when other life forms and agencies such as AI and machine learning are needed to support us.”

Perihelion/Rage/secret_lover looks at life in space from the perspectives of biology and artificial intelligence. The artist selected bacteria that can metabolize metal as the ideal life form that could survive on the Moon. He then used a culture of these bacteria and images from space exploration to train a neural network, making emerge new learning models and visual outcomes. The result of the experiment is projected on a screen, it suggests the kind of dreams bacteria could make about their life on the Moon. We can recognize some of the images but they are modified by the bias that bacteria have transmitted to the neural system.

Perihelion/Rage/secret_lover is a puzzling project but it points to the possibility of other life forms going on a space exploration. They might have their own biases and flaws but who’s to say that they are worse than our own. 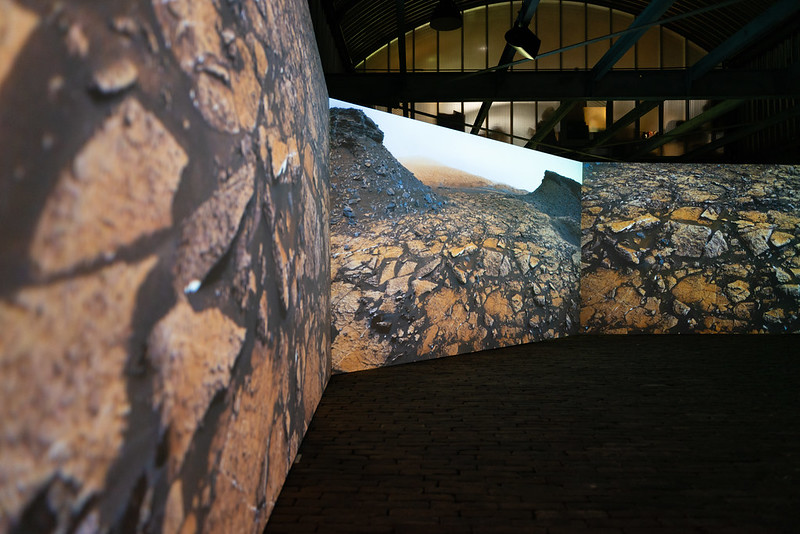 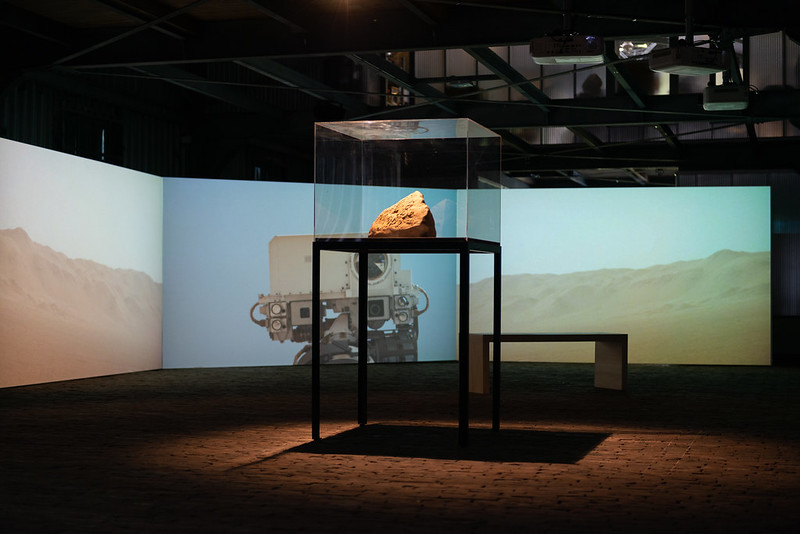 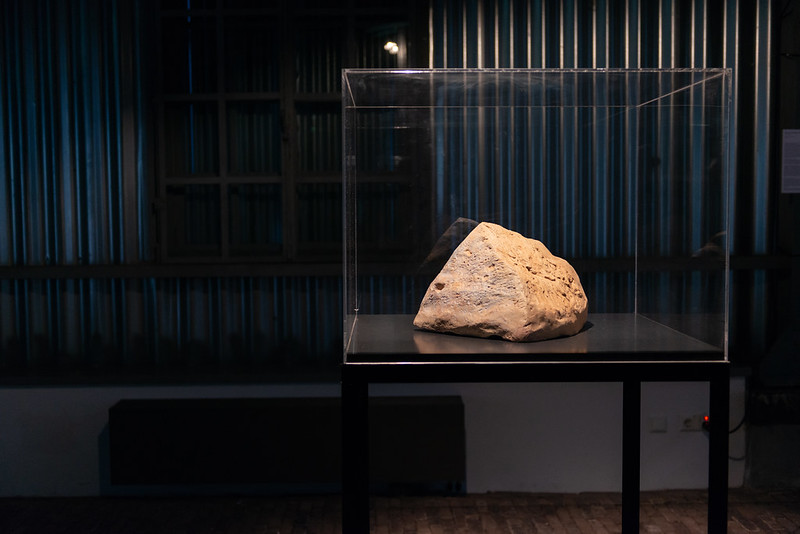 Minna Långström’s multi-screen film installation project Photons of Marshotons of Mars follows workers dedicated to interplanetary research. The work particularly focuses on Vandi Verma, a space roboticist at NASA’s Jet Propulsion Laboratory known for driving the Mars rovers. Verma and her colleagues will never go to Mars and the way they explore the distant landscape is completely synthetic. Because it is mediated by technology, their work invites us to what it means to observe and understand what we cannot experience directly.

The Supre:organism exhibition was a collaboration between Waag and Kunstfort bij Vijfhuizen. It was curated by Miha Turšič, an artist, designer and researcher, dedicated to the development of arts and humanities in outer space.

Related story: MAAN/MOON: The only exhibition that sparked my enthusiasm about space exploration.