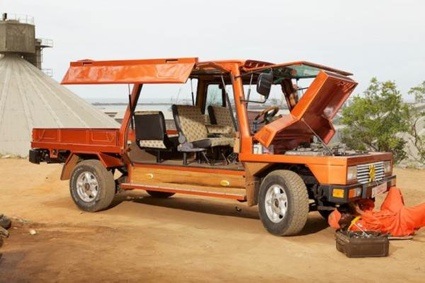 Visual artist Melle Smets and researcher Joost van Onna followed the travel of discarded cars from Europe to Ghana and ended up at Suame Magazine, near the town of Kumasi, in Ghana. In this area, 200,000 artisans are working in 12,000 workshops, stores and factories to repair and give a new life to European disused vehicles.

Smets and van Onna then collaborated with local craftsmen and mechanics to build a African concept car in three months. The vehicle is called SMATI Turtle. SMATI because it is the acronym for the Suame Magazine Automatics Technical Institute, an engineering training centre for the artisans. And Turtle because the vehicle is strong and sturdy like the reptile.

The completed car was even inaugurated by Otumfuo Nana Osei Tutu II, King Asantehene of the Kingdom of Ashanti. 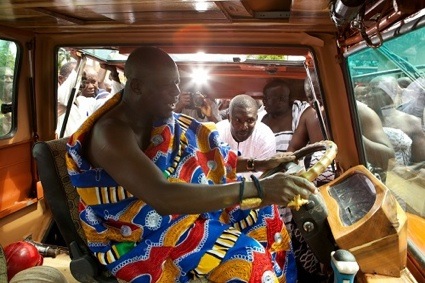 The Turtle has been touring Europe since its creation. It will spend the Autumn in Pau, France, as part of the Disnovation exhibition and the accès)s( festival of digital culture.

The show opens on October 8 and i caught up with project leader Melle Smets to have him talk about his adventures in African mechanics.

Hi Melle! The text describing the project mentions the Buafo. Was this pickup truck prototype at the origin of your project? Where did the idea for the Turtle 1 come from exactly?

The Buafo was a car from the 70ies. From this vehicle we extracted a lot of essential idea’s of what a African car should be. The existence of this car was unknown to us until a old mechanic from the neighborhood told us this story. Then we started to look for it and found one around the corner of our workshop. The reason we searched for this vehicle was the fact that we don’t know anything about cars, and needed a lead to start working from.

And once you had the idea for the Turtle 1, what happened? You and Joost van Onna just turned up in Ghana and put your project into a full working prototype?

The idea to build a car came much earlier. We wanted to research the potential of a society without formal structures. Suame Magazine looked like the most incredible example of a city which was also a working car plant. Something we could hardly imagine as we thought car assembling is a very high tech business. Because the place is very hectic we thought of a narrative to tell the story of the informal car assembly line. This is how the idea came to built a car from scratch and go from workshop to workshop to learn the process and tell the story. 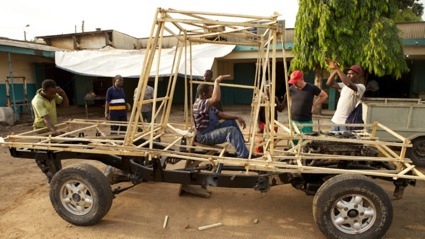 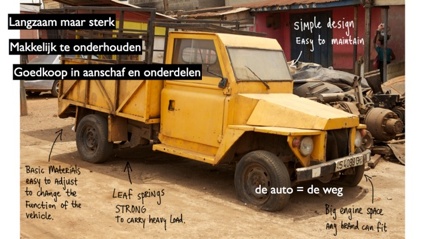 How did you navigate the Suame Magazine and find the right people to work with?

We went there a year earlier to scout the area and try to find a partner. This became Suame Magazine Industrial Devellopment Organisation. They liked the idea as a PR stunt for their NGO. They are a umbrella organisation for all guilds. 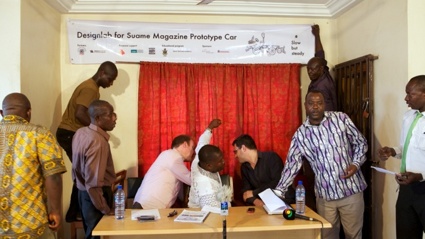 Apart from being skilled and resourceful, what did local people bring to the project in terms of creativity, ideas?

The car is developed by the whole neighborhood in terms of storytelling, throwing idea’s, bringing in their networks and their labor. We tried not to take the lead in design and organised every step in the proces as a communal decision. For example the car design is done by wooden sticks. On the other hand people started to use the project to draw the attention on SMIDO by the media. This free publicity was good for the project but also good for growing the network of SMIDO members. In terms of work, we had to pay people to actually do the job. 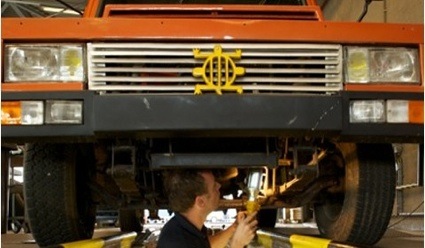 SMATI Turtle being tested in The Netherlands. Image

And conversely, what did you bring that the Ghana craftsmen needed? They were already repurposing car parts after all….

The most lucrative thing we brought them is a story. The Turtle became a National story which they used to get access in the highest networks of the country. And this is where the real business is done. Wright now they are making contracts with Danida (Danish devellopment organisation from Ministry of Foreign Affairs of Denmark) for over 2 million dollars to set up a new land for a car production fascility.

The project involved building a car in 12 weeks. Why was this timeframe important to you?

Money and time. ; )
Unfortunately I was on a time schedule.
Although the time pressure also made it work.
Just the same as making a theatre play. You can practice for ever.

Do you think it would make sense for western consumers to have a car culture driven by the moto “let’s make things simple”?

We need to seriously start thinking in terms of what we really need and want, instead of try to build a paradise of things around us.
Stuff we don’t understand but just buy in the hope it is a short cut to happiness. So the car is just an example.

Of course our infrastructure is evolved in a way we need sophisticated cars to be save driving 140 KM/hour. But it would be healthy to keep rethinking the whole concept of traveling. There are a thousand ways we can go from A to B. Why we make ourselves dependent on this system? The concept of a highway is a hundred years old and in the time they made it up there were fantastic idea’s to get from A to B in total different way. We would like to remind people on this freedom of choice but also responsibility to give meaning to our environment.

And is there any commercial interest for the prototype (or an adapted version of it) outside of Africa?

Not that I know of. But we also never put energy in this. I envision a car production future where every continent has its own species of cars. The climate, economy and landscape demand certain needs to a vehicle. Technology will make it possible to manufacture more on demand and more specific adjustments.

Turtle 1 is part of a broader project that looks at “the stream of discarded cars to Ghana in order to document their hitherto unknown destination.” So which kind of images, videos and discourses do you bring to European destinations where you show the Turtle prototype?

We do lectures to governments, sit in advisory boards, work with industry on new idea’s. Next to this we did some exhibitions on car shows, art festivals to show drawings, photo’s and video’s. Every member of the team had it’s own medium. You will see on the exhibition. There was also a lot of media coverage on television, news papers and magazines in Germany and the Netherlands.

The prototype is called Turtle 1. Does it mean that there will be new and improved models of the Turtle? More generally, what’s next for the project?

We are now working together with the Dutch car industry on a vocational training program. The ambition is to start this program in Suame Magazine next year. In the Dutch Design week we organise workshops around this businesses case. See Word doc for more detailed concept.

Check out the vehicle at the DISNOVATION exhibition, on October 8th- December 6th, at Le Bel Ordinaire, Billière, France. The 14th edition of the festival itself will run November 13th -16th, 2014, at Le Bel Ordinaire + associated venues in Pau & around. Programme curated by Nicolas Maigret and Bertrand Grimault.