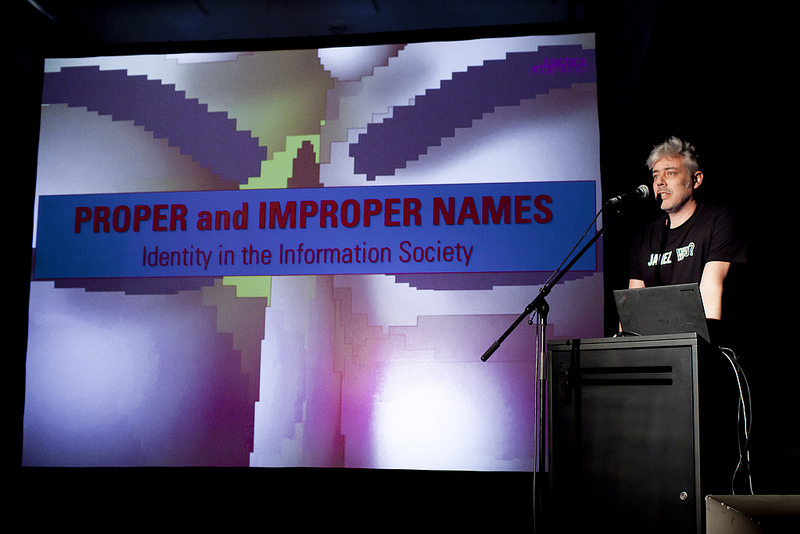 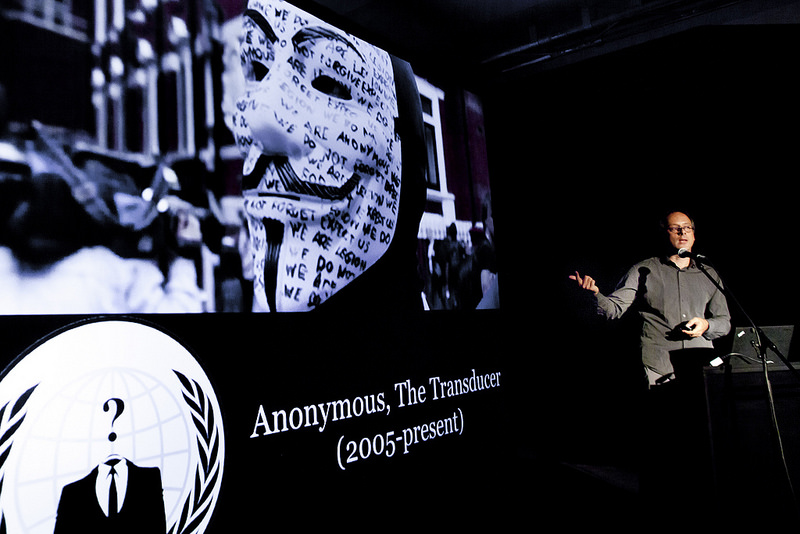 I was wondering when i’d find a moment to type the notes i scribbled during the symposium Proper and Improper Names: Identity in the Information Society but since Aksioma obligingly published the videos of the talks, i’m going to take the easy road and copy/paste/link everything below.

Proper and Improper Names, a conference on identity and authorship in the age of networks, took place at Kino Šiška Centre for Urban Culture in Ljubljana last month. The event was framed by Marco Deseriis‘ 2015 book Improper Names. Collective Pseudonyms from the Luddites to Anonymous. The publication analyzed how shared pseudonyms are deployed as a collective strategy to build symbolic power that challenges traditional forms of political and aesthetic representation.

The seminar raised questions such as: What lies between the “I” and the “We”? How can a distributed/multiple entity manifest itself in the political, cultural and biological spheres? How can identity experiments characterized by constant flux and mutations be understood? How do they play around and disrupt capitalistic structures that enclose the subject inside a one-dimensional unit?

The five guests of the conference were theorists, artists, writers, and performers who have forged concepts, aesthetic codes and strategies that attempt to escape measurement and attribution:

Marco Deseriis is an Assistant Professor of Media and Screen Studies at Northeastern University. In his introductory talk, the researcher gave us a crash course in “improper names”, defining its mechanisms and listing some of the key figures of the phenomenon.

The journey into pseudonyms shared by collectives, affinity groups, and individual authors kicked off with the iconic I’m Spartacus moment and then looked at the cases of Ned Ludd, Alan Smithee (an official pseudonym used by Hollywood film directors who wish to distance themselves from a movie), Monty Cantsin used by mail artists, the very Italian phenomenon of Luther Blisset and of course 4chan and Anonymous. I’d really recommend you sit down and listen to the amazing stories that emerge from the use and abuse of shared pseudonyms.

Philosopher Gerald Raunig has recently published Dividuum. Machinic Capitalism and Molecular Revolution, a book exploring the genealogy of the term “dividual,” i.e. that which is divisible and combinable according to the principle of similarity. According to him, dividuality plays a massive role in the intensified exploitation taking place under contemporary machinic capitalism. On the other hand, this same terrain of dividuality provides a fertile ground for a new kind of resistance, one that can be realized in the form of con/division. There’s no video of his presentation. Judging from his interventions and remarks during the discussions with the audience, i would argue that his talk was absolutely fascinating. No one in the audience was given the opportunity to follow it though. Raunig spoke in english over a very loud robotic voice that read, in german, extracts of his latest book. Utterly bonkers! Weirdly enough, i’m now eager to read the Dividuum book.

In 2007, performance artist Kristin Sue Lucas succeeded in legally changing her name from Kristin Sue Lucas to Kristin Sue Lucas in a Superior Court of California courtroom. On the name change petition that she submitted, she wrote ‘Refresh’ as the reason for the change.” The legal procedure enabled her to reload her identity as one would a webpage.

For the symposium, she enrolled accomplices to help her re-enact the court hearing and discussion she had with the judge. 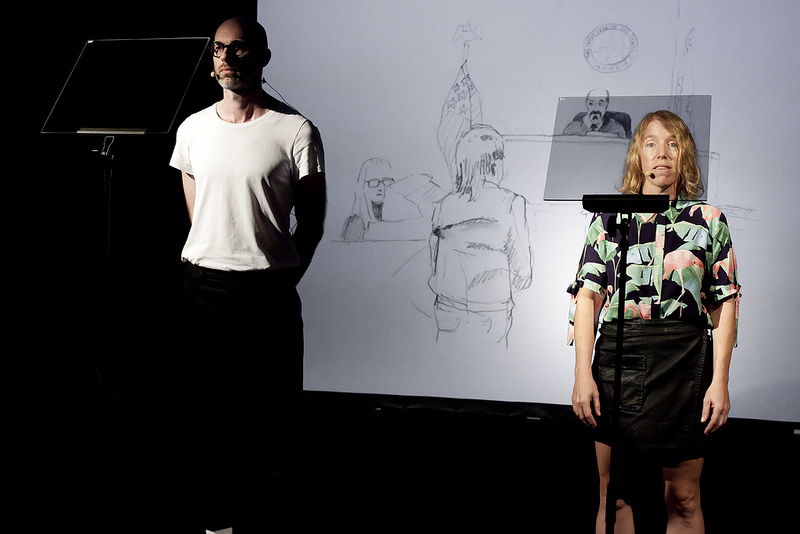 She took us through 3 art pieces she made by collaging YouTube videos that had been watched by only a handful of viewers. Her aim was to weave connections and associations that no algorithm would ever make. The result is incredibly moving. Each of the video collage demonstrates how much of their intimacy and vulnerability people are willing to reveal on social media. The films show a middle class America that feels increasingly marginalized and that uses online platforms in lieu of a physical public space that has disappeared.

Natalie Bookchin: Prospective Collectives: Animating the Shared Self at Proper and Improper Names. Identity in the Information Society 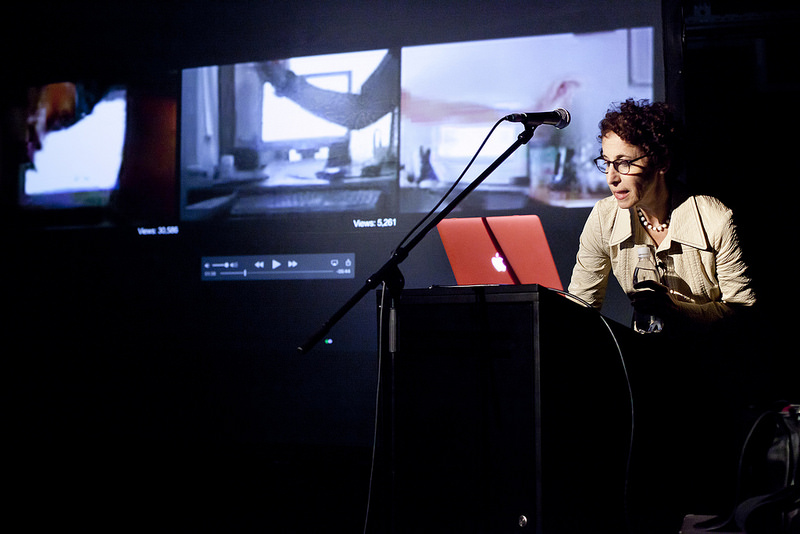 I’m going to close with the video of an invisible but nevertheless spectacular member of Wu Ming, a collective which have authored a body of literary works, critical texts, screenplays and maps, collaborating under a pseudonymous identity. Wu Ming = My new hero(es). This one is the most exciting talk i’ve seen in 2017. I’ll come back to to their work later on with a proper post. There’s no reason why you shouldn’t enjoy this gem of a crazy, smart, invigorating talk right now:

Wu Ming 1: We Want the Asteroid! — Psychic Warfare and the Wu Ming Foundation at Proper and Improper Names. Identity in the Information Society 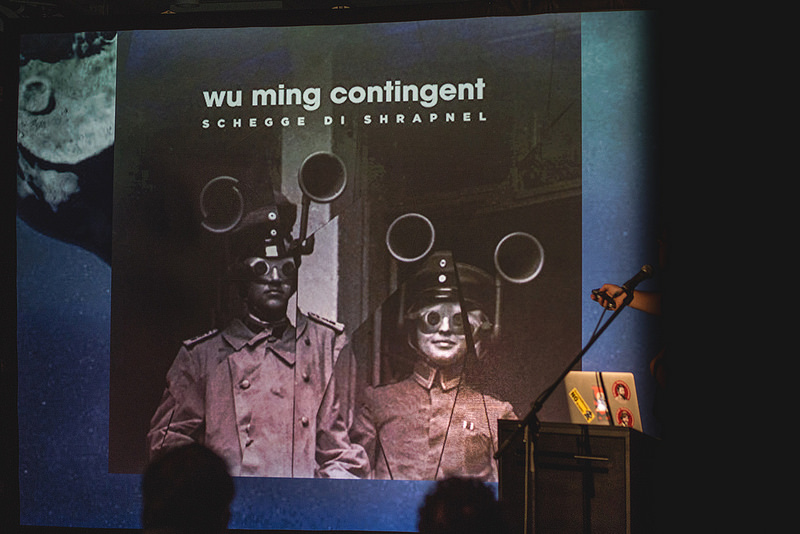 Here’s the full transcript of the presentation as well as the slides. 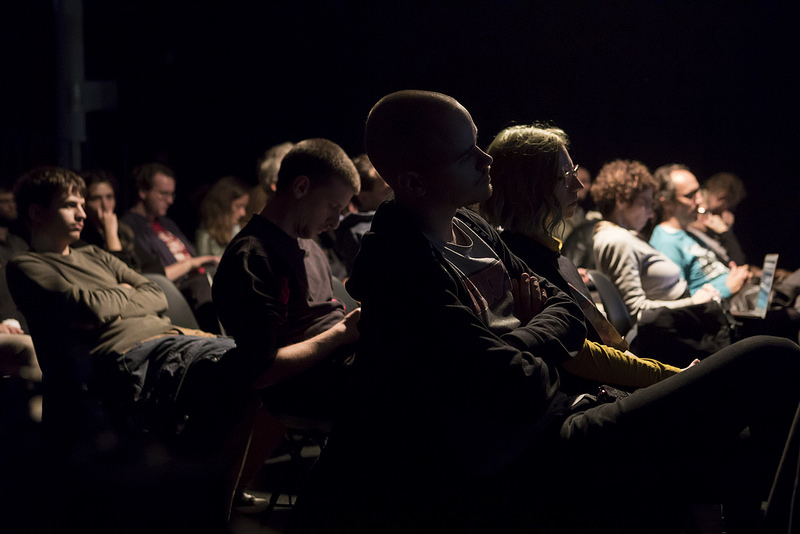 The conference closed with opening of Janez Janša®, curated by Domenico Quaranta. The exhibition is at +MSUM – Museum of Contemporary Art Metelkova in Ljubljana until 18 February 2018.

Proper and Improper Names. Identity in the Information Society marks the 5th edition of the Tactics and Practices seminar series. The conference was curated by Marco Deseriis and realized in the framework of State Machines, a joint project by Aksioma (SI), Drugo more (HR), Furtherfield (UK), the Institute of Network Cultures (NL) and NeMe (CY).