Phantom islands belong to history and myths at the same time. For centuries sometimes, geographers believed in the existence of a number of bogus small pieces of land in the middle of the ocean. They described their inhabitants, narrated their discovery and mapped their position until, eventually, these islands were proven not to exist. Some of these islands were purely fictitious, often invented by individuals in search of glory. Others emerged because of geographical errors, optical illusions or confusion with other natural entities such as icebergs, fog banks or large pumice rafts. But even the most fanciful of these islands left their marks on sailors’ imaginations, inspiring legends and counterfactual histories. 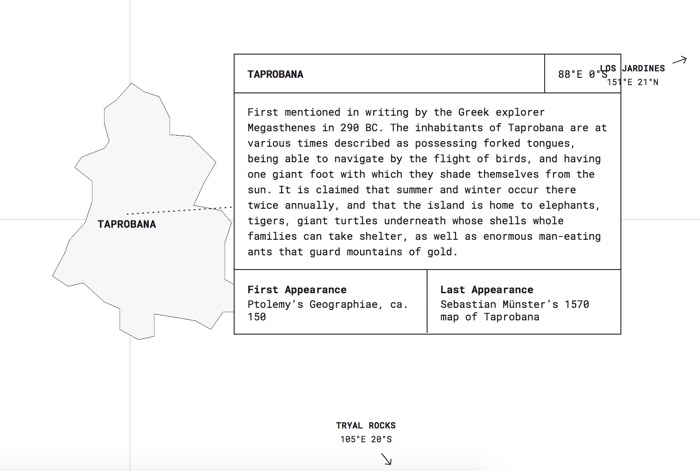 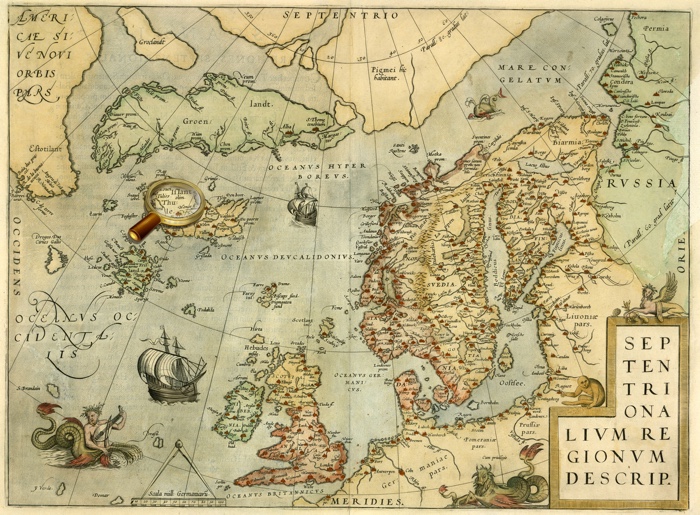 Map of Scandinavia from Abraham Ortelius’ atlas Theatre of the World, Antwerp, 1570

Andrew Pekler explores some of these islands in Phantom Islands – A Sonic Atlas, an interactive map that charts the music and environmental sounds of mythical islands from around the globe.

The artist gave an acoustic presence to pieces of lands that never were. As you drift from one area of the world to another, the compositions change and evoke sounds that might or might not be entirely artificial. The result of the multimedia work is strangely seducing and intriguing. It blends 21st century technology with the fantasies of explorers from the age of maritime discoveries and conquests.

The multimedia artwork was commissioned by the Jeu de Paume gallery in Paris for Fourth Worlds – Imaginary Ethnography in Experimental Music and Sound, an online exhibition that brings together sound artists, musicians and theorists who speculate and reflect on the discourse of “otherness” that often arise from the ethnographic (and colonial) urge of circumscribing cultures as separate and geographically localized entities.

I got in touch with the composer and performer for a quick Q&A:

Hi Andrew! I found it very interesting that, on the website of the work, many of the texts that describe the historical phantom islands contain a lot of visual elements. One of them has a “column rising in the middle”, another is inhabited by islanders with their cheekbones perforated, another by giant man-eating ants, etc. And of course many attempts to find and map properly these islands end up with a ‘no sighting’ conclusion. So what made you want to give a sonic presence to these islands? And, more generally, why this focus on historical phantom islands?

Yes, it’s funny that the two actions (their sighting and their inscription on maps) that are responsible for these non-existent places having existed in a certain sense are both visual. Because I work with sound, and more specifically because I’m interested in composing music that evokes or constructs plausible (yet unreal) places by synthetic means, it seemed obvious to pursue my fascination with the phenomena of phantom islands by giving them an audible dimension.

Initially, I learned about phantom islands from my partner, an ethnographer who taught on the topic in several art education projects. I was (and remain) fascinated by the fact that these phantom islands are not fictions in the conventional sense. Event though a few of them were invented by unscrupulous seafarers seeking to make a name for themselves (or just earn further commissions), most phantom islands were unintentional fictions – the results of the imprecise science of navigation, clouds, fog banks and icebergs being mistaken for land, and wishful thinking. And yet, these islands were in included on nautical charts and world maps, sometimes for hundreds of years. For the cartographers who drew them and the seafarers and laymen who studied them, they were as real as any other feature on the map and had real consequences for the people who searched for them, and frequently for the real people and places that were found instead. For example Davis Land, an island which was claimed to have been discovered by the pirate Edward Davis in 1687 off the west coast of South America. The Dutch West India Company dispatched three ships to the area in 1721 and though unable to find Davis Land, they stumble upon the previously unknown Easter Island. Their visit results in the death of about a dozen islanders and the wounding of many others.

And so, although non-real, these places remain irreducible artefacts of the early modern age. Something like hallucinations brought on by the high fever of European expansionism and colonialist ambitions. 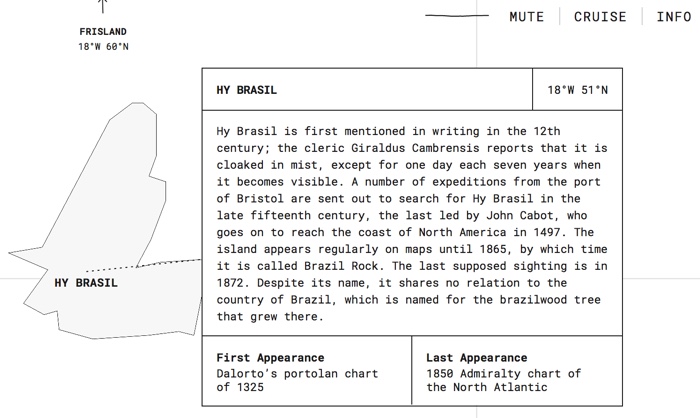 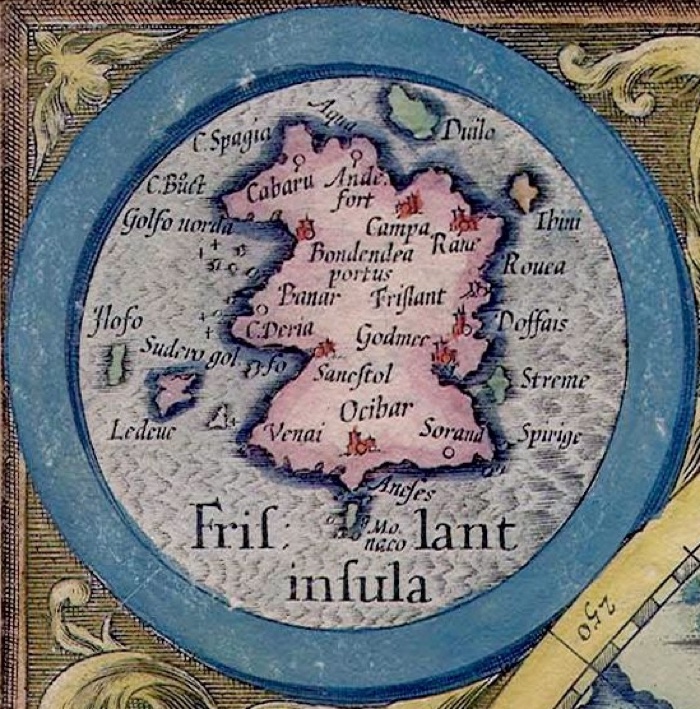 Map of imaginary island of Frisland on the Arctic by Gerardus Mercator. First print 1595, this edition 1623 ‘s arctic map

How do you associate a historical phantom island with a particular sound? What guided the sound making process? The supposed location of the island? its history? its name?

It was mostly a process of matching musical fragments and sketches I had recorded over the last couple of years to the various islands according to what information I had about them and their location. I was interested in building up a network of related, sometimes overlapping, sound-worlds such that one would have the impression that the sounds of islands near one another share similar features and that the farther one travels from any given starting point on the map, the more dissimilar the sounds become. In effect, I wanted to add a parallel sound dimension of connections between the phantom islands that would mirror their own plausible yet impossible existence.

The crucial factor here is that these (non)places are presented and described within the context of the familiar map of our real world. That means that the listener’s/visitor’s prior familiarity (however vague it may be) with music from various parts of the world, as well as the one’s historical, geographic, and anthropological knowledge and/or assumptions comes into play in the imagination process. This quasi-collaboration between sound materials, text and listeners’ prior knowledge/beliefs (which always takes place anyway) is what I was trying to actively shape.

And where do these sounds come from since you couldn’t do any field recordings?

As mentioned above, what I’m interested in is composing music that evokes or constructs plausible places by synthetic means.

That is, I use electronic instruments to produce music with sounds that can be taken for insects, bird calls, wind, waves and other “natural” sound phenomenon as well as with elements that are reminiscent of ethnographic recordings (albeit of no particular culture). The sweet spot for me is when a piece I have made can be simultaneously heard as both a field recording and as completely composed, synthetic construct. There’s a nice correlation there with the existence / non-existence of the phantom islands themselves.

The Phantom Islands atlas was commissioned in the framework of Fourth Worlds – Imaginary Ethnography in Experimental Music and Sound, an online exhibition by Jeu de Paume that aims to question the discourse of “otherness” through speculation. Some of the questions that the show wants to address include “How does the( modern technology of field recording perpetuate a Eurocentric perspective of culture? Can sonic speculation destabilize cultural essentialisms or stimulate critical counter-memories?”

How did you approached this topic? How is this type question reflected in the sonic atlas?

In music, the idea of “otherness” comes into play when western music makes use of non-western elements – these can be sounds and instruments, but also rhythmic, melodic and harmonic structures. In popular forms, this was / is most often a matter of ornamentation whereby conventional musical statements are enriched with borrowed flavorings of exotic instruments.

This is what is generally called musical “exotica”, whereby the specificity of references made to non-western musics (and by extension, to the “other” to whom they belong) range between documentarian/ethnomusicological motivations of recreating maximal authenticity on the one hand to outright fabrications that originate entirely in the composer’s imagination.

There is of course lots of ground in between these two extremes where fantasy, musical practice and theory, and articulation mix in interesting ways. So it was against this backdrop that Phantom Islands was conceived. In essence, the project’s aim is to methodically exoticize non-existent places in order to make visible the process of exoticization itself. Trying to make productive the cognitive dissonance of obviously fictitious places (fictitious yet plausible enough to have been considered real at one time) the objects of an imaginary ethnography lets us hopefully see and hear how all exoticas are fictions. 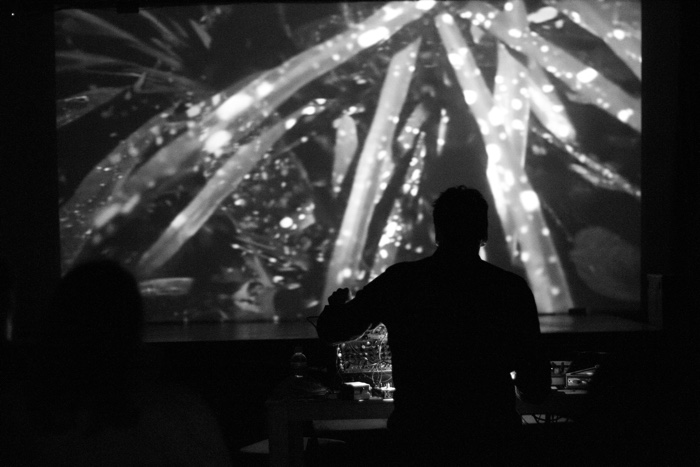 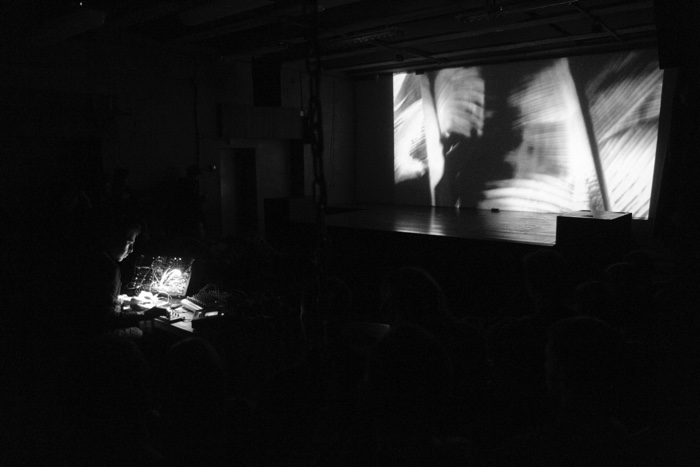 One of your previous albums, Tristes Tropiques, is an album of “synthetic exotica, pseudo-ethnographic music and unreal field recordings”. I just read an interview with you in which you explain that a visual and spacial element is added to your performances of TT. For it, you used footage of various tropical flora Thailand. Are you planning to also perform Phantom Islands? And which images would you use then since the locations and existence of the islands has not been proved?

I’m kind of drawn to the “purity” of the idea of the project existing as a website only. At the same time, performing Phantom Islands could be an opportunity to try out some new (to me) formats. At the moment I am thinking about putting together something like a lecture-performance or a live radio play with some of the information on the islands read aloud and interspersed with musical improvisation based on the sounds I used for the website.

Phantom Islands – A Sonic Atlas was commissioned for the exhibition Fourth Worlds: Imaginary Ethnography in Music and Sound. Concept, sound and text by Andrew Pekler. Design and development by Flavio Gortana. Research by Kiwi Menrath. Produced with the Support of Jeu de Paume and DICRéAM, CNC.