(available on amazon USA and UK.) 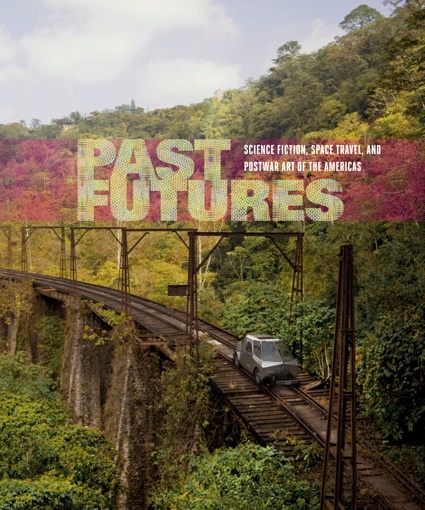 Publisher MIT Press writes: From the 1940s to the 1970s, visionary artists from across the Americas reimagined themes from science fiction and space travel. They mapped extraterrestrial terrain, created dystopian scenarios amid fears of nuclear annihilation, and ingeniously deployed scientific and technological subjects and motifs. This book offers a sumptuously illustrated exploration of how artists from the United States and Latin America visualized the future. Inspired variously by the “golden age” of science fiction, the Cold War, the space race, and the counterculture, these artists expressed both optimism and pessimism about humanity’s prospects.

Past Futures showcases work by more than a dozen artists, including the biomorphic cosmic spaces and hybrid alien-totemic figures painted by the Chilean artist Roberto Matta (1911-2002); the utopian Hydrospatial City envisioned by Argentine Gyula Kosice (1924-); and Incidents of Mirror-Travel in the Yucatan, in which Robert Smithson (1938-1973) layered tropes of time travel atop Mayan ruins. The artists respond to science fiction in film and literature and the media coverage of the space race; link myths of Europeans’ first encounters with the New World to contemporary space exploration; and project futures both idealized and dystopian.

Poster for the film ‘Conquistador de la luna (Conqueror of the moon), Mexico, 1960 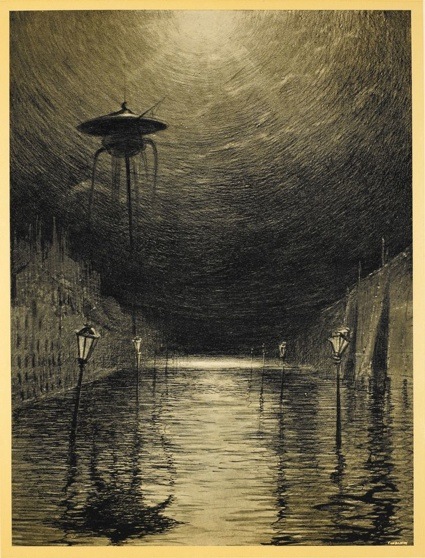 Once in a while, i like a good catalogue. Especially when they educate me about a topic i know little about: retro futurism in the Americas. Past Futures. Science Fiction, Space Travel, and Postwar Art of the Americas is the catalogue of an exhibition of the same name at the Bowdoin College Museum of Art. The book explains in 4 essays and many many images how artists of the period that goes from 1940s to 1970s imagined the future.

The context is exciting enough: it’s the time of the Cold War, of the growing popularity of the science fiction genre, of a faith in the power of science to transform society and the human condition. Artists were more than ever stimulated to imagine what the future would be like.

Times were full of hope but they weren’t, however, all naivety and science worship. First, people were afraid of nuclear extermination. And believe it or not, they were also already worried about government surveillance. Or about the disruption that technology would bring to the social fabric. And, for some artists from Latin America, space control evoked unpleasant memories of a colonial past.

The first essay, by curator Sarah J. Montross, explores the impact that space travel and science fiction had across the Americas and also the tensions between the promises of the present and a rich cultural past.

Miguel Angel Fernandez Delgado looks at Latin America’s long tradition of studying the cosmos (which dates back to the Mayas, the Incas and the Aztec) and presents the work of artists whose work is related to astronomic phenomena and utopian ideals.

Rodrigo Alonso’s essay on the influence of science fiction over art in Argentine in the 1960s shows how much artists also had to contend with a political atmosphere that oscillated between a transition into democracy and surges of repression and censorship.

Rory O’Dea explored the influence that science fiction had on the work of land artist Robert Smithson.

Unsurprisingly, i was more interested in reading about art from Latin America and discovering how they questioned the nature of progress. I found some real gems in the book, works by artists involved in scientific inquiries, building robots, walking through a desert that evokes a lunar terrain, or expressing a critical ambivalence towards technology. Too bad i couldn’t find images for some of these works online. I managed to dig up a few though: 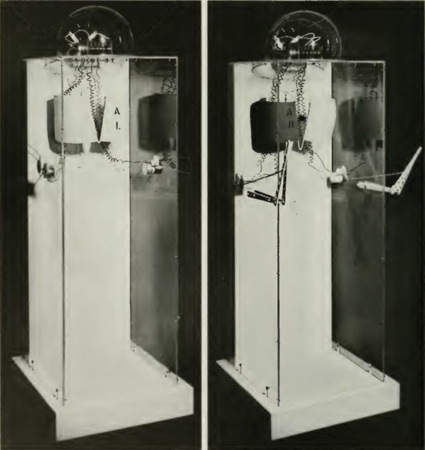 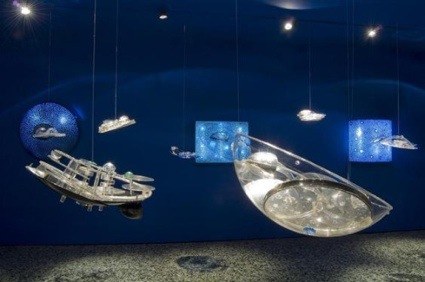 Tired of the housing models proposed by Bauhaus, Le Corbusier and functional architecture, Gyula Kosice plexiglass maquettes and drawing of dwellings 5000 feet above the surface of the earth. The Hydrospatial City, which finds some echoes in the cloud cities of Tomas Saraceno, responds to fear of ecological degradation and overpopulation. 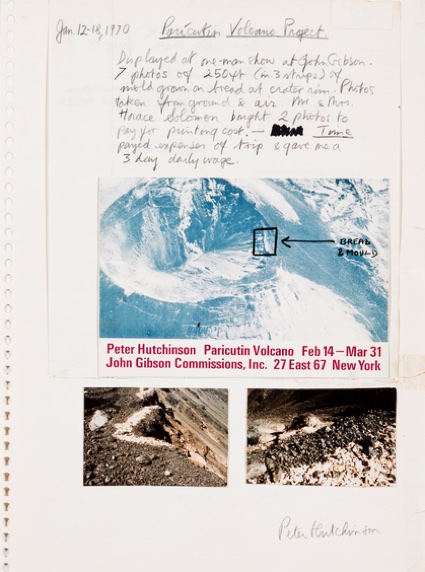 In 1970, Peter Hutchinson climbed the Paricutin volcano in Mexico. Upon reaching the summit, he spread 450 pounds of bread along its rim. After 6 days of high humidity and intense heat at the crater’s edge, the bread began to sprout spores of luminous orange mould. Life grew in a place thought as lifeless. 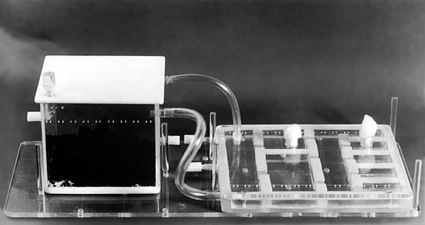 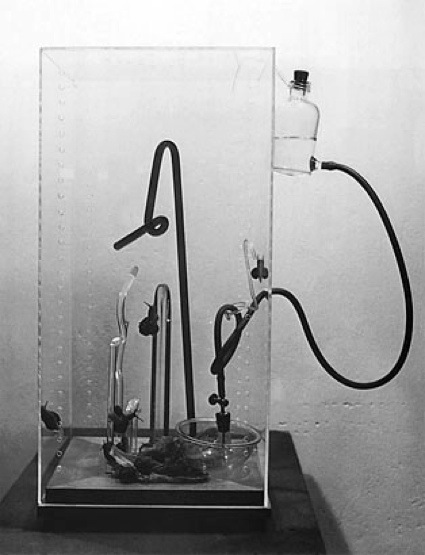 Luis Fernando Benedit built dwellings for snails, ants and other tiny creatures in order to observe the behavioral conditioning in an artificial, enclosed environment. 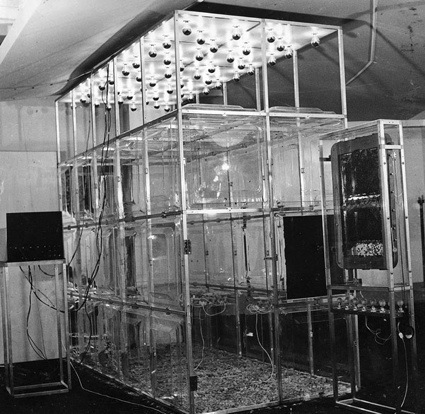 The artist participated to the Venice Biennale 1970 with an installation that included a beehive with live bees, and a garden of artificial flowers that supplied nectar. 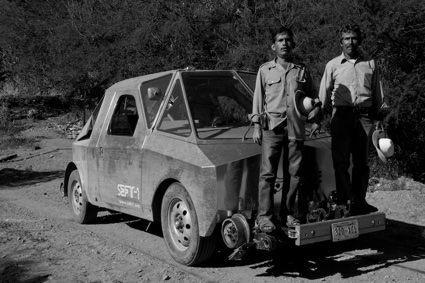 SEFT-1 is resolutely contemporary but the curators of Past Futures found some resonances of Past Futures in Ivan Puig and Andrés Padilla Domene‘s half car half spaceship hybrid called SEFT-1 (the Sonda de Exploración Ferroviaria Tripulada, in english Manned Railway Exploration Probe.) The artists traveled along the ruins of the Mexican passenger railway system, which was left to rot after privatization in the 1990s, and investigated the remains of what they consider a misuse of common resources and therefore a political issue. 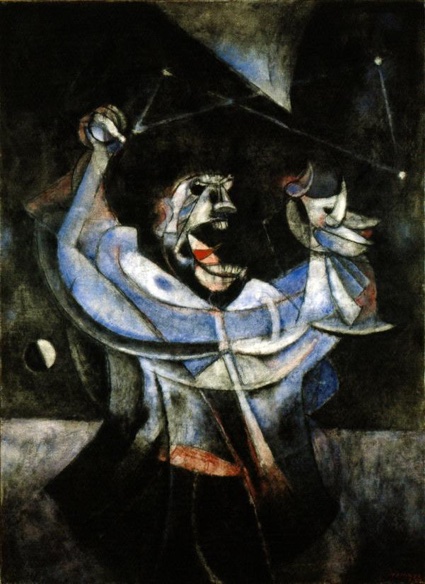 This post might suggest that the book is all about early forms of media art in the Americas. It’s not. Plenty of paintings in there as well.