A few weeks ago (two months ago actually but who counts?), i participated to MUTEK_IMG, the forum on current practices in digital creation at the Phi Centre in Montreal.

Sherry Kennedy and Greg J. Smith from HOLO magazine curated five of the panels in the programme. I missed one because jetlag but otherwise i got to hear some very interesting and, at times, provocative ideas about artificial intelligence, post-truth media, human-machine choreographies and automated storytelling tools. MUTEK_IMG could have been an event that uncritically extols the glories and wonders of digital technology. It wasn’t, or at least it wasn’t just that. In Montreal, i found food for thought, intelligent comments on tech and creativity and a desire to share some of that with you.

Here are 7 ideas i discovered at the festival:

1. The house next door might be part of the tax haven landscape 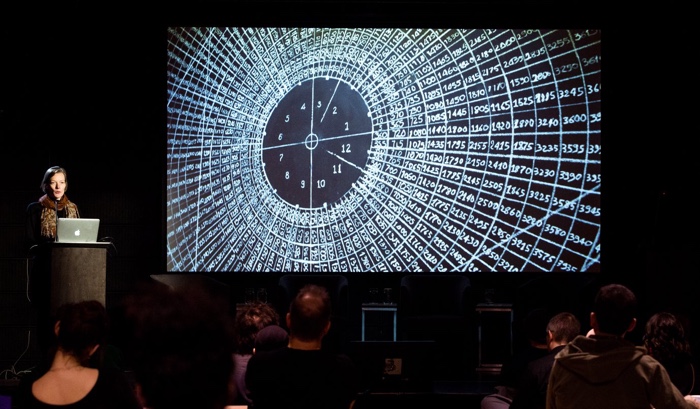 One of the members of RYBN.ORG, the French collective that uncovers the darkest and most esoteric aspects of finance, technologies and information, participated to the Automation Rules Everything Around Me panel. She also made a very brief intervention later on in an event in which she presented the groups’ Offshore Tour Operator project. 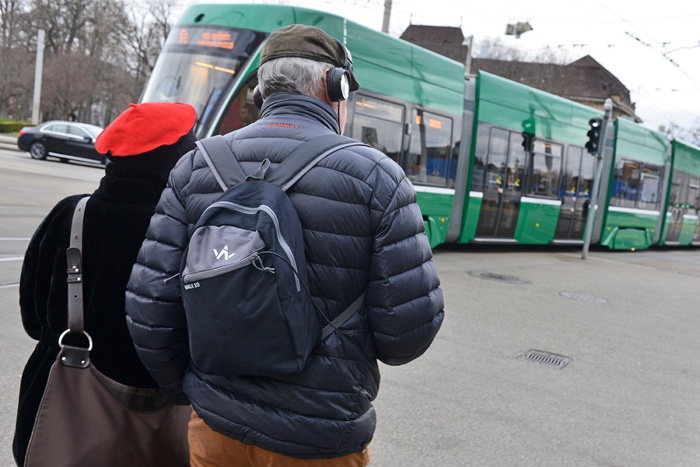 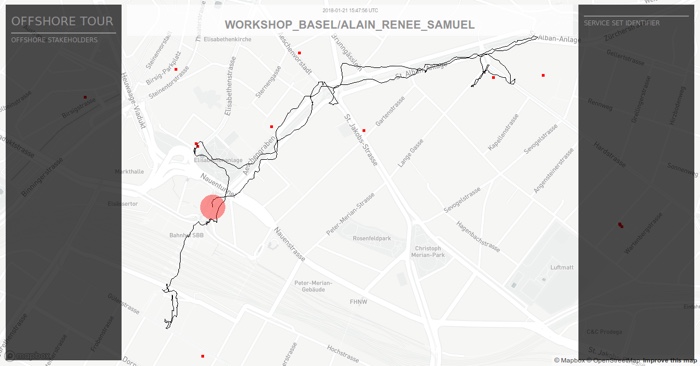 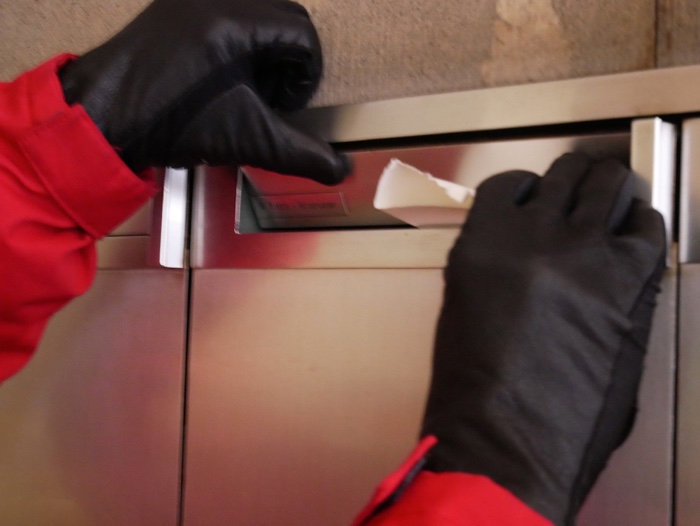 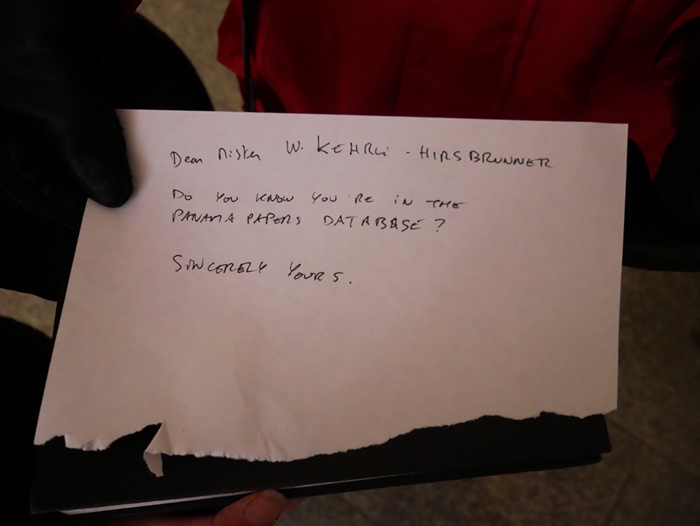 As part of an inquiry into tax avoidance and other tricks of the finance industry, RYBN organizes workshops in which participants are invited to literally walk through the offshore layer of their neighbourhood. “Offshore Tour Operator” is a psycho-geographic project that guides participants through the local addresses that appear in the panama papers database.

Equipped with a compass and a camera, participants have to find the physical locations of the shell companies, the ghosts addresses, mailboxes and other locations that compose the offshore network. Once in front of the building, they take pictures of the location, and, when possible, leave a message through the letter box.

If you are curious about the work, check out Aude Launay’s fascinating conversation with RYBN on ZeroDeux.

2. Criminalizing wealth is not on top of cities agenda 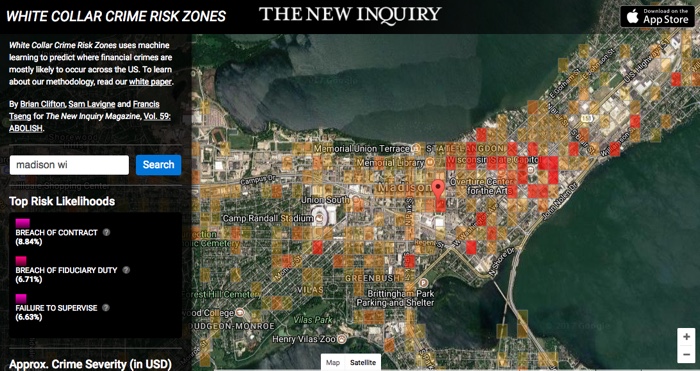 Artist and programmer Sam Lavigne gave us a quick tour of his projects during the panel titled Digital Art for a Post-Truth Reality.

I particularly liked White Collar Crime Risk Zones which uses machine learning to predict where financial crimes are mostly likely to occur across the US.

A similar system is used by police forces already but it focuses only on street crimes. The problems with predictive policing, as it has been applied so far, is that it often results in bias and a disproportionate targeting of impoverished communities of colour.

White Collar Crime Risk Zones is different though: it shows white collar crime, and not “street” crime. The software identifies locations with “risk likelihood” for crimes like unauthorized trading, insider dealing or breach of fiduciary duty and flags them as potential financial crime hotspots. Using profile photos of financial executives on the LinkedIn database, the work also shows a computer-generated image of what the “most likely suspect” looks like. He’s very white and very male!

The artist emailed mayors across the U.S. to inform them that WCCRZ could be a useful tool for crime-fighting. Sadly, alas, the answers he received indicate that catching and punishing members of poorer communities is much higher on their agenda.

3. How did i miss the memo on lithium? 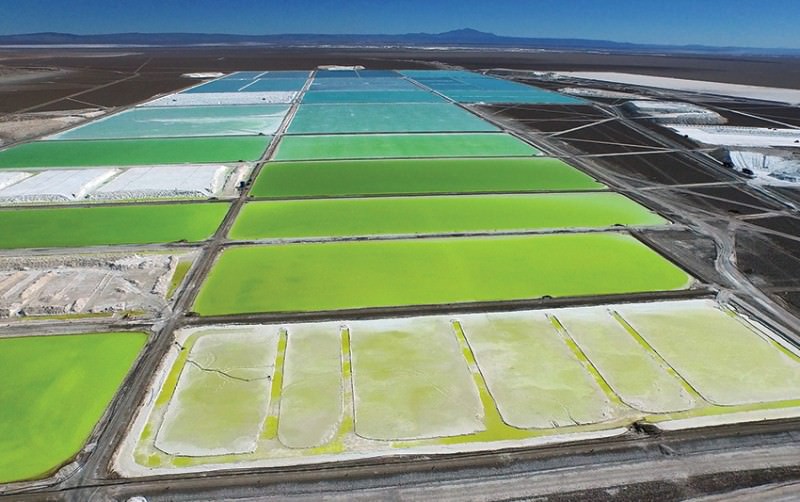 In his City Everywhere keynote, speculative architect Liam Young looked at the diffusion of urban architecture. The architecture of today’s cities, far from being circumscribed to a limited perimeter, is built on a planetary-scale and densely-networked infrastructure. Young’s performance gave us a brief but affecting view of some of the minerals, innovations and mechanisms our modern life relies on. Most of them appear to be fragile and beyond anyone’s control. One of the aspects the video he showed us looked at the environmental cost of “clean” energy. In order to free ourselves from fossil fuels, we will have to increase the mining of lithium, a metal crucial for battery-powered technologies such as smartphones, laptops, electric cars, etc.

“Lithium-ion battery production is forecast to double to eight billion cells by 2025,” writes DW. “And the world price for lithium carbonate has almost doubled in a short span of time to about $13,000 per ton. A new analysis indicates that, without proper planning, there could be short-term bottlenecks in the supplies of some metals, particularly lithium and cobalt, that could cause temporary slowdowns in lithium-ion battery production.”

Young and his nomadic research studio Unknown Fields traveled to ‘the lithium triangle’: Bolivia (a country claimed to hold more lithium than anywhere on Earth), Argentina and Chile.

Ryan Stec, the artistic director of artengine in Ottawa, presented Artificial Imagination, a symposium about creativity in the age of algorithm, artificial intelligence and machine learning. And the two main things i remember from his talks are 1. the videos of the symposium are on vimeo. 2. the english language is fundamental to coding. According to him, the prevalence of english keeps the colonial axis alive.

5. Getting rid of enduring colonial influences can be a creative endeavour 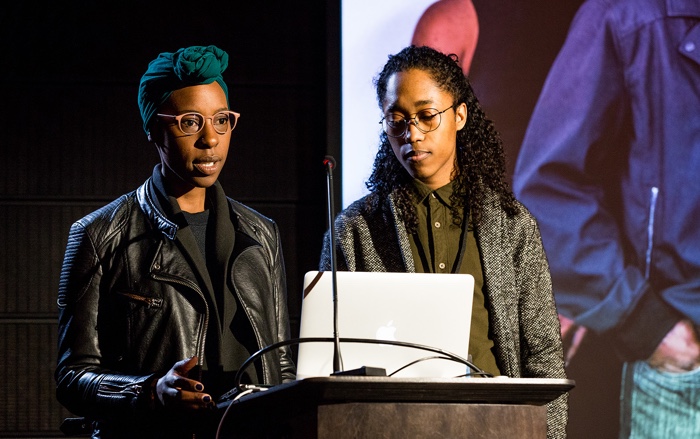 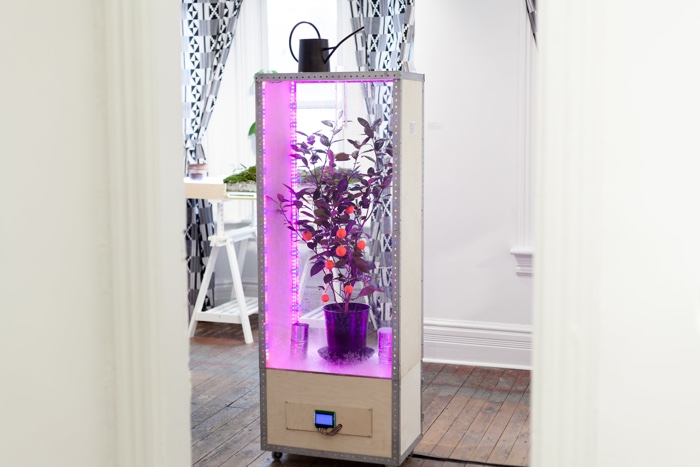 Andre Baynes and Chiedza Pasipanodya are the curators of Hacking Black Futures, an exhibition that took place at BAND [Black Artists Network Dialogue] in Toronto a few weeks ago. The duo described how their exhibition used design to speculate about Black-centric, post-capitalist societies. The participating projects explored how such societies would tackle problems that plague today’s world. No idea how they’d deal with coding but a future (hopefully?) edition of Hacking Black Futures might investigate the issue.

6. No one can resist a Gay Roman army 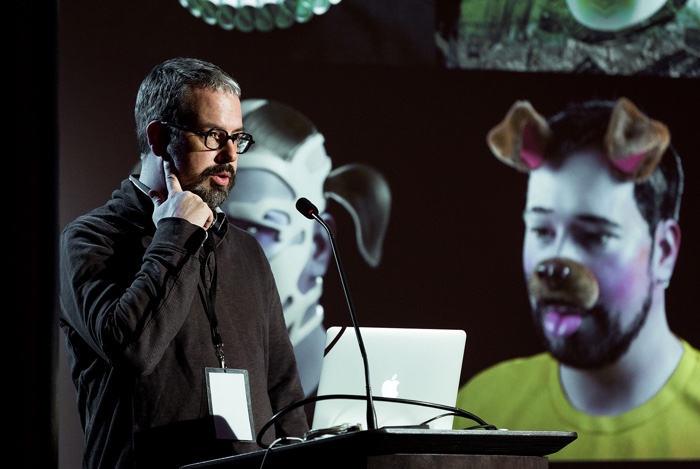 Especially Alan Warburton‘s talk. I had heard of his work but never looked into it. Now i will. He’s brilliant. Here are just two of the works i found particularly moving and smart:

The film Training Camp applies a motion capture file labelled “Gay” in a online mocap library to a Roman soldier and then to an army of Roman soldiers. 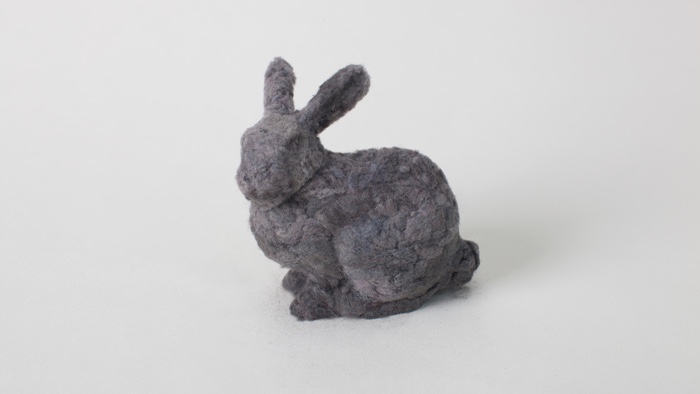 Dust Bunny is a sculpture made of angora-like dust the artist harvested from the inside of ten 3D animation workstations at visual effects studio Mainframe in England.

Dust Bunny articulates a particular inversion that occurs between the real and the virtual: in the real world we seek to banish dust and dirt to optimise functionality, in CGI we labouriously reintroduce it at great cost – complex simulations, layered pseudo-random noise algorithms and intricately constructed 3D models seek to emulate the photographic, chaotic, infinitely dusty real world.

7. We’re ready to believe anything for love or a good headline 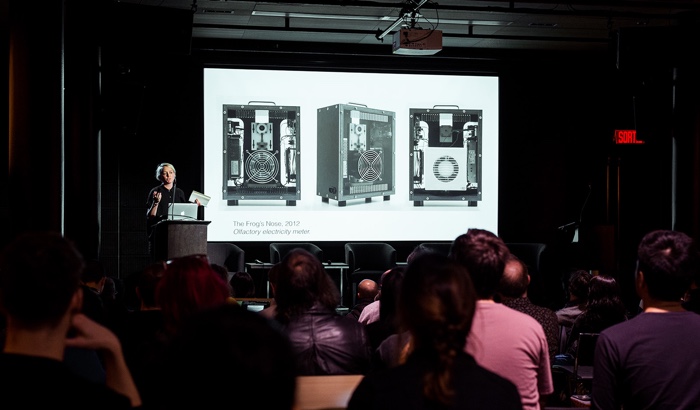 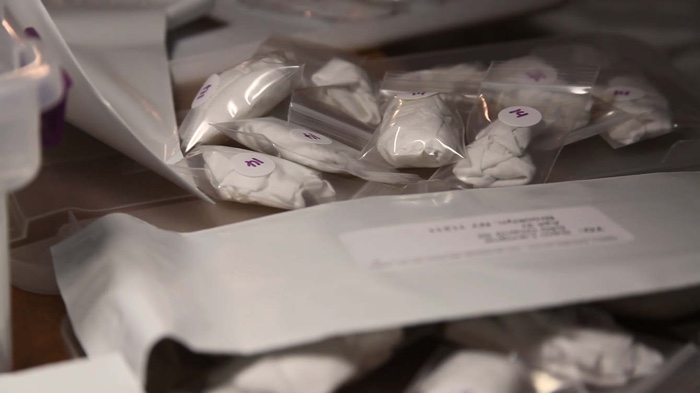 Tega Brain took us through the depth of media gullibility with Smell Dating. A couple of years ago, she collaborated with Sam Lavigne to launch a matchmaking service built around body odour. You register, receive a T-shirt and wear it for three days. You’re not supposed to use deodorant nor perfume during that time. After that, you mail it back to the dating service and in return you receive 10 samples cut from the T-shirts of other participants. You sniff to your heart’s content, and once you’ve chosen your scent match, you get the phone numbers of your future dates.

It was a participatory art project and installation. As the video above demonstrates, mainstream media didn’t seem to have processed the ‘art’ element of the project. They laughed a lot during the news segments but in the end, they took the idea very very seriously.

For more info about the panels, check out Creative Applications‘ report Inventing the Future at MUTEK_IMG. 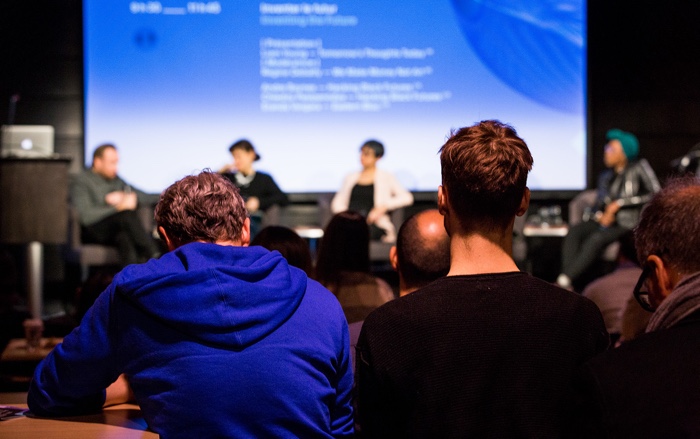 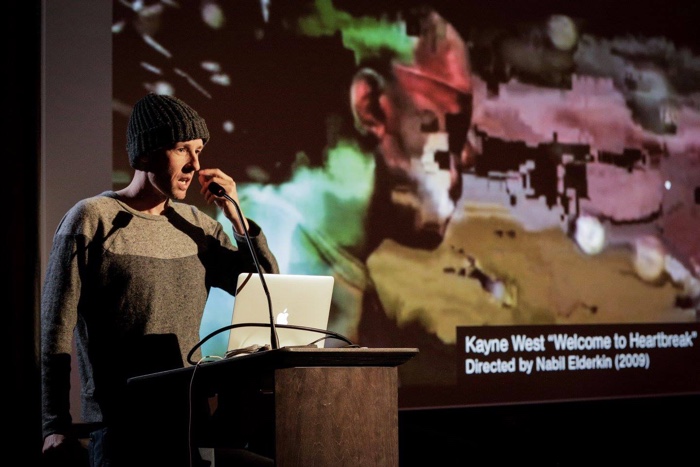 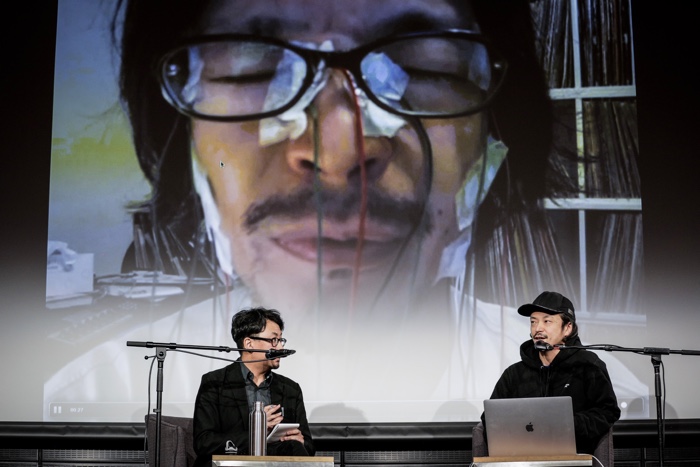