True to my reputation of “slowest reporter on this planet”, i’m still catching up with my last visit at MediaLab Prado in Madrid. As you might remember, MLP was celebrating the opening of its decidedly bigger and brighter space with open days, the 2013 edition of the Libre Graphics Meeting and a new Interactivos? workshop (number 13 already) titled Tools for a Read-Write World. 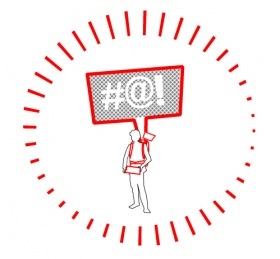 A whole morning of the Libre Graphics Meeting was dedicated to the presentations of the projects that had been selected to be developed during the Interactivos? workshop. One of them is the KLE – Kit de Libertad de Expresión (or Freedom of Speech Kit), a portable digital device that allows people from all over the world to participate to remote protests by sending and displaying text messages in public space. The interactive banner is (unsurprisingly) inspired by the record number of social protests that took place in Spain in 2011. It is estimated that over 23.000 demonstrations have been organised that year around the country. 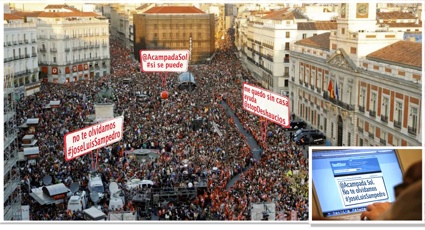 Developed using open free hardware and software, the KLE device is made of textile LED screen, is energetically autonomous, light and easy to build/replicate. Although KLE is a personal device, its use is shared by the community promoting participation and expression

Hi María and Chema! How did you come up with the idea for Free Freedom of Speech Kit (KLE)? Why was it important to you?

The idea came when participating in one of many social demonstrations during last years in Spain. I never brought a billboard, but there are so many things to say! People bring their written banner to a demonstration but, once there, one might get inspired and have new ideas for messages to display. We also observe a lot of creativity in the banners messages, some of them are visual poetry. So the question arose: what would happen if banners were an interactive display?

Then this simple idea started growing and we saw the real implications that a connected autonomous device like this could have in the realm of the freedom of speech, such accessibility and communication between cultures in collective manners.

As we deepened in the subject, we also noticed that the main social movements had been sprouting through social networks, where one connects as individual to, later on, collectively gather on the public space. That revealed us that we could develop tools for providing a smoother transition between the individual use of social networks and the collective expression that public space represents. Fortunately, the project team comprises a great combination of technology and public space experienced professionals, gathering the required knowledge to develop such idea . 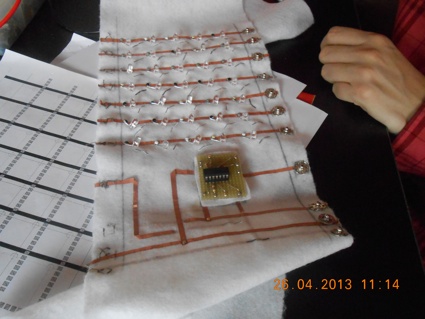 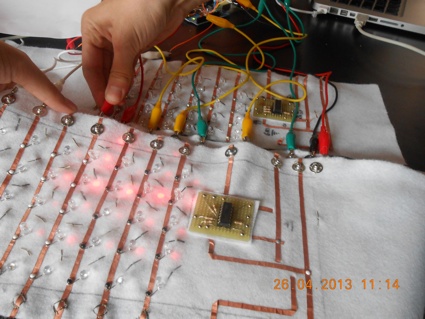 The project is fairly ambitious and when i saw its presentation at the Free Tools meeting the other day i was wondering how much you’d manage to achieve in just the two weeks that the Interactivos? workshop lasted. So how far are you in the hardware and software?

These two weeks have been a great opportunity for accelerating the development of the project. Currently we have a prototype built in fabric (flexible and light) which is connected by Bluetooth to a mobile phone running an Android application for sending messages. So in just two weeks and with a great team of collaborators (Quique, Rafael, Dani, Carlos, Sonia, Gonzalo, Andrea, Echedey, Soraya, Eva and many others) we have built our first functional prototype: a crafted LED flexible display with internet connectivity through a cell phone. So we are now just one step far from having a real KLE (Kit de libertad de Expresión/Freedom of Speech Kit) working in the streets.

Is KLE mostly an art project with just the one prototype and a couple of performances to demonstrate its potential power or do you hope that its use will spread and that people will build their own and use it the way they want?

We come from the engineering and architecture world, both with a strong creative component but, even though we are very close to the artistic world (we are collaborating with photographers, theater companies…), we try to think as well about the actual functionality of our work (we are active members of a community garden and other self managed civic projects in Madrid and Barcelona).

We give as much importance to the conceptual framework of our projects as in contributing to society, providing solutions and tools that satisfy citizens needs rather than creating new ones.

Therefore, in KLE we are making an effort to unite technology, human and accessibility, with making it visually appealing and helpful to citizens. In fact, we aim at that joint where a piece of art is used and replicated on the streets giving it a much more powerful meaning, making it evolve in unexpected ways: born with us but living through other people.

How do you see people using it exactly? In advertisement context? Activist, protest ones?

Being a visual platform it makes it suitable for advertising purposes. However, our scope is focused on the social / citizenship field, where freedom of speech comes true sense. We are seduced by the idea of people expressing themselves by a platform that someone else or a community have built for others (note that the Freedom of Speech Kit is envisaged as a Do it Yourself Kit). It is also intriguing the concept of the “carrier” of other people messages, probably a new scope of legal issues may arise.

Besides other possible uses, our main interest is on bringing our kit to the streets serving citizens and their creativity and solidarity with others. We want to explore collective processes on the construction of messages and the interactions that these might generate in a context such a demonstration.

In this direction, our most ambitious goal, that we comment with great caution (due its dependance on the local restrictions of each country in terms of Human Rights, which we are now starting to look into), would be the creation of a worldwide KLE network where messages from different countries could cross over the globe and be displayed from square to square, connecting collectives from different public spaces globally. 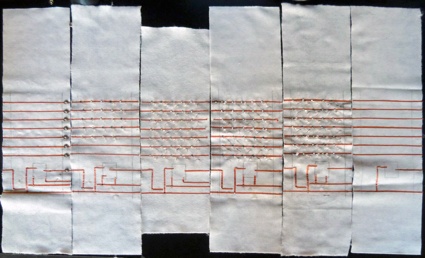 Why do you think people will need it? Aren’t Facebook and twitter enough to spread text messages?

The word “need” might be too disruptive. There was a time when human beings didn’t need fire, electricity or internet, but once they were invented they became extremely useful technologies.

The importance of our input is very far from those examples, but we are convinced that if in a demonstration there is a KLE, there will be many people willing to use it. We would like it to be a platform that provides accessibility to those who for any reason can not be on the street (physical challenge, illness, job restrictions, fear, etc) but want to join the community by sending a message through it.

So far, Facebook or Twitter do not solve that. It is a paradox, because even though they are social networks, their users produce and consume content on them individually. They are collective channels, but their access devices are individual. Our platform is producing and displaying content in a collective environment, that could as well be supported by these communication channels. We would like to explore two features that social networks still have not solved: the actual collectivity (in a shared place and time) and its interaction with the public space.

Can you briefly explain how the system will work?

The kit consist of an electronic portable banner where a user can display messages either using a local physical interface, such a keyboard, or a virtual one using social networks through internet. Likewise, there is a sort of online platform that allows writing messages and sending and displaying on the banner.

On the other hand, we want to develop an appropriate web service where all banners built in the world can be registered and be geolocalized by a GPS. In that way, messages could be sent directly to a specific place of the world (from square to square, as we were saying previously).

The device is built with a series of textiles (both conductors and insulators of electricity) and LEDs, together with a microprocessor and communication modules. All software and hardware design is being documented in an instructions manual, so anyone will be able to build their own kit: DIY. Actually, it will be delivered under copyleft license, so users will be able to improve the design, adapt it to their local circumstances and their knowledge will be delivered in the same way back to the rest of the world.

Any other upcoming steps/further developments for the project?

Right now, we think is quite important to reach the international communication layer via internet. There are situations we need to take in consideration, such how to solve communication when there are frequency inhibitors or when mobile phone cells are saturated during a demonstration. Step by step we will be analyzing and trying to come up with solutions to the wide range of circumstances, for maximizing KLE interaction possibilities.

The next phase of the project, to improve the implementation of the platform and make it more accessible, is to start a crowdfunding campaign. We want to complete the first version of the kit and distribute the first units in places where freedom of speech is under threat.

Thanks Chema and María!

The prototypes of Interactivos?’13 Tools for a Read-Write World are exhibited at MediaLab Prado until May 31, 2013.