I discovered the work of Addie Wagenknecht a few months ago while visiting The Digital Now exhibition in Brussels. The young artist was showing Pussy Drones gifs. I didn’t fully get what they were about at first but the more i looked at the porno-grotesque-aggressive images in the exhibition space that day, the more i thought she was a talent to follow. And indeed, the rest of her portfolio didn’t disappoint. Addie made a painting using a drone as a brush, enrolled a stern industrial robot to rock a baby cradle, asked online sexcam performers to replicate classical paintings, and built a chandelier using CCTV cameras.

Addie Wagenknecht studied photography, traveled the world, completed a Masters at New York University as a Wasserman Scholar and right after that got a fellowship at Eyebeam Atelier, CultureLabUK and more recently at HyperWerk Institute for Post-Industrial Design and Carnegie Mellon University under Golan Levin at The Frank-Ratchye STUDIO for Creative Inquiry. 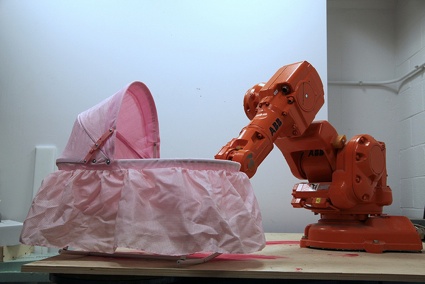 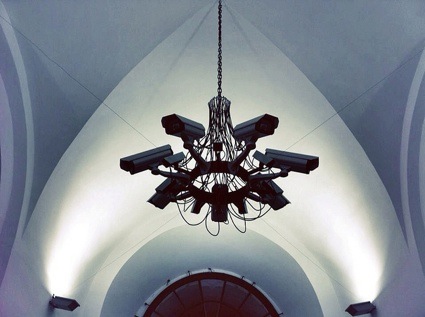 Now that the long, idle Summer hiatus in which i published roughly 0.7 posts per week is over, it’s back to business as usual and i’m glad that Addie Wagenknecht has accepted to be the first artist i interview for the the new ‘season’. 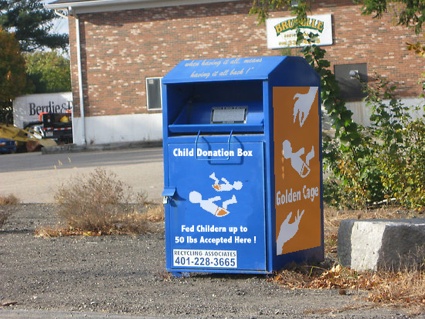 Hi Addie! While reading the description of The Optimization of Parenthood (Part 1 and Part 2), i realized that i almost never encounter artworks dealing with parenthood in media art. Or, because the accompanying texts mostly talks about mother, should i say feminism? Do you see these two works as new ways of exploring and discussing feminism?

Theorists wrote and said this series is celebrating the death of the mother. It’s not objective, it’s subjective. At the time we developed this piece I spent a lot of time trying to decide on a title: “The Optimization of Parenthood” vs. “The Optimization of Motherhood” because those are very different in my experience. We were doing a residency at The STUDIO for Creative Inquiry at Carnegie Mellon University. At the time I was pregnant and wanted to examine this false sense of balance between parenting and career in America. How the process is transparent but the structure to function is a secret. The formula is often behind the closed door of people’s homes (and psychiatrist’s office). I found that being critical of the choice to be a parent, as a parent, is taboo. More so, being critical of the experience as a mother is censored socially if not outright denied by everyone around me. I watched the unraveling of the carefully crafted facade of women and family v2.0.

I think women of my generation were raised to believe that we can have it all, but that theory had never really been tested, our mothers gave us something impossible. At the same time, I was playing with materiality and preconceived notions of perfection within my own work. I wanted to let go of that in a playful way. I never wanted to be responsible for feminism, yet this particular notion made sense and I want to have the poetic liberty to give that away to someone else who really wants it.

The Optimization of Parenthood

The charm of the OfP rocking robotic arm is that it is purely industrial. What made you decide to use this orange factory-like robotic arm rather than a cute robot or even an almost invisible unobtrusive robotic system?

I wanted to highlight the repetitive nature of parenting in a way that was relatable in terms of gestural motion, but foreign in its implementation. The blatantly robotic arm evokes this idea of industry – mirroring the precise, reactive nature that parenting often demands. I wanted the arm to suggest this idea of impossible flawless perfection. 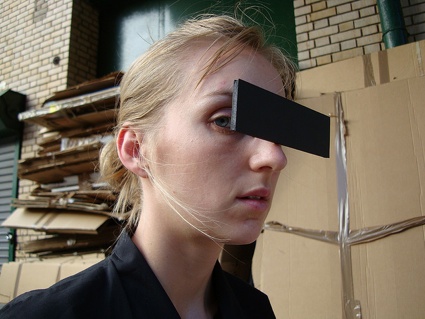 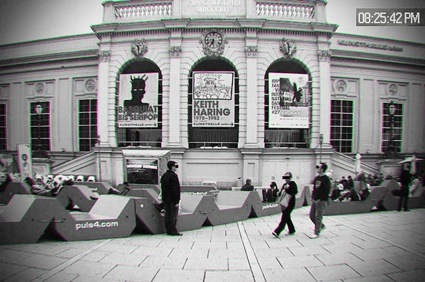 You recently wore the Anonymity accessory for a performance in Vienna. Could you tell us about the performance? How it unfolded, who participated to it, how passersby reacted to the black bars, etc.

Anonymity as a concept is addictive – especially when you’re living in a major metropolitan city like New York. That is why projects like Pirate Bay and Tor are some of the most successful works of our time. They have a large scale participatory aspect allowing people freedom and a chance to challenge outdated ideas around copyright. It is one to many system, no one person controls it, there is so much beauty in that. I think we are reaching a point if we haven’t already where anonymity is imperative to creativity.

The performance in Vienna was all about encouraging people to openly claim anonymity, as a public statement. While living in New York, I started to became aware that we were constantly under surveillance; I was being watched by security cameras, asked to show my ID to get into a building, etc. The pervasiveness of surveillance made anonymity more desirable. Surveillance has become so ubiquitous its become comfortable. We do not think twice or challenge it. We have become such a surveillance saturated society, in some regards we expect it. Anonymity is becoming a solution for some to protect destabilized identities, revolutionaries, and hackers. It is changing the way we define the face. Mask in public spaces are beginning to be outlawed. I think that the goal has shifted that we no longer want to become an individual, but to become anonymous. People who are able to maintain anonymity have a sort of tense, mystical quality, and we wanted to explore this in a literal, physical piece within public space.

The large-scale performance was commissioned by Bogomir Doringer for the “Faceless” exhibition at MuseumsQuartier. We provided 1,200 museum attendees with limited edition, wearable black bars that allow for preemptive non-disclosure. As they walked through the courtyard, a live feed was projected into the exhibition space. It intentionally occupied the line of criticism and play, allowing the surveilled to become the surveillance.

I think Broken_links is the most irritating work i’ve seen recently. I keep coming back to that page -and feeling utterly silly in the process- in the hope that the images will eventually appear on the screen. I just can’t help it. Did you realize that a work in appearance so simple would create such emotional response?

[laughs] Yes, that’s one of the goals. It’s looking at those instances when an algorithm, code, or search engine fails to properly interpret code. Essentially, broken_links is about capturing points of failure and glitches in their most literal form. The Internet is so volatile, yet at the same time it’s completely cached and highly functional. Images, websites, and texts, are removed all the time without our knowledge as the user. Google, for instance, plays a powerful role because they’re able to manipulate the availability of information. They show us what they want us to see, not necessarily what we searched for. So, I wanted to take the information bias, that false sense of trust, and run with it. 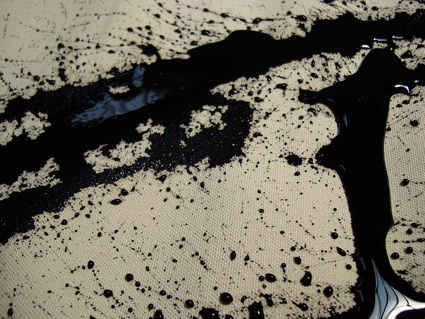 I was also very interested in Black Hawk Paint. Especially because I saw that you worked on it in 2008 and, at least in Europe, it’s only more recently that artists and curators have started to work on the drone topic. Do you think that the work of artists who engage with UAV technology have an impact on how the public is understanding the issue?

Yes. I wanted to re-appropriate the drone technology as a tool for creativity, expanding the way people consider their potential use. I implemented a computer vision tracking system, and used the drone as a brush. The resulting images are abstract, and I consider the process of making the piece as important as the finished work.

I see Kyle McDonald‘s “Liberator Variations” he developed for FAT lab working in a parallel way. He noticed people’s fear surrounding the Liberator and his response was to produce a series of remixed versions of the original file, transforming the 3D printed gun into a version of the OpenGL teapot, among other things. He wrote: “There is only fear when we feel disempowered, when we lack understanding, when we are censored, when we lack input and are instead being controlled.” 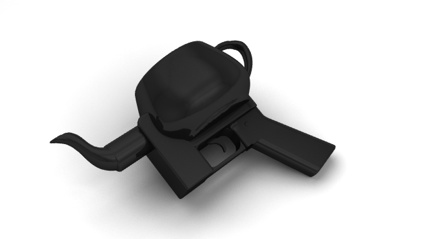 You’re a member of F.A.T. Lab. Can you tell us how you got involved in the group and how you fit into it?

I suppose I made enough provocations at some point to get an invite. [laughs] I also knew Evan, James, Steve and Geraldine quite well because we were more or less at Eyebeam together around the same time. I consider F.A.T. my friends and family. It’s an honor to be part of the lab. They are all extremely talented and they’ve been an inspirations and constant supporters of my practice. It’s really humbling.

I’m taking part in the first-ever digital art auction at Phillips NYC on October 10, where the piece “Asymmetric Love #2” will be auctioned. It is a chandelier made of steel, CCTV cameras, and internet cables. In November, at MU in Eindhoven is F.A.T. GOLD Europe, a traveling retrospective of F.A.T. Lab’s work that originated at Eyebeam Art + Technology Center in April. There will be a few new pieces in that exhibition which are forthcoming. Both of these are curated by Lindsay Howard. In early 2014 the exhibition “Blackmarkt” at 319 Scholes. The pieces for this exhibition are remixed off of items bought off the Silk Road/deep web. We are working on a series of jewelry made from drugs and bootleg items, which is a new space for me. The pieces look at how perception fulfills value, and the relationship of originality, copies and demand. Finally, in June will be my first solo exhibition in Europe at RUA RED Dublin, curated by Nora O Murchú. 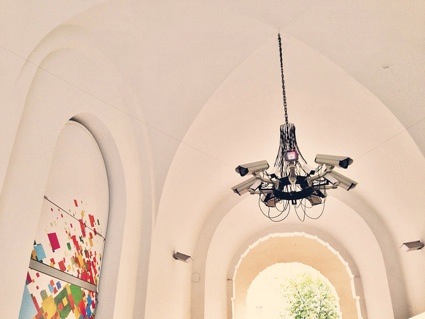