A week or so ago, i was in Eindhoven for the Age of Wonderland festival and realized the city was in full Dutch Design Week swing. There was far far too much to see for someone like me who has only a mild interest in design. So i went for the blockbusters. One of them was the Graduation Show of the students from Design Academy Eindhoven. I’m sure most of you know the school already. Its mission is to form designers whose work reflect on the fast changes the world is going through, whether these changes are technological, societal, ethical or cultural. There were two floors filled with all kinds of armchairs, musical instruments and ‘concepts.’ Here’s my best of because the blogosphere loves a best of. 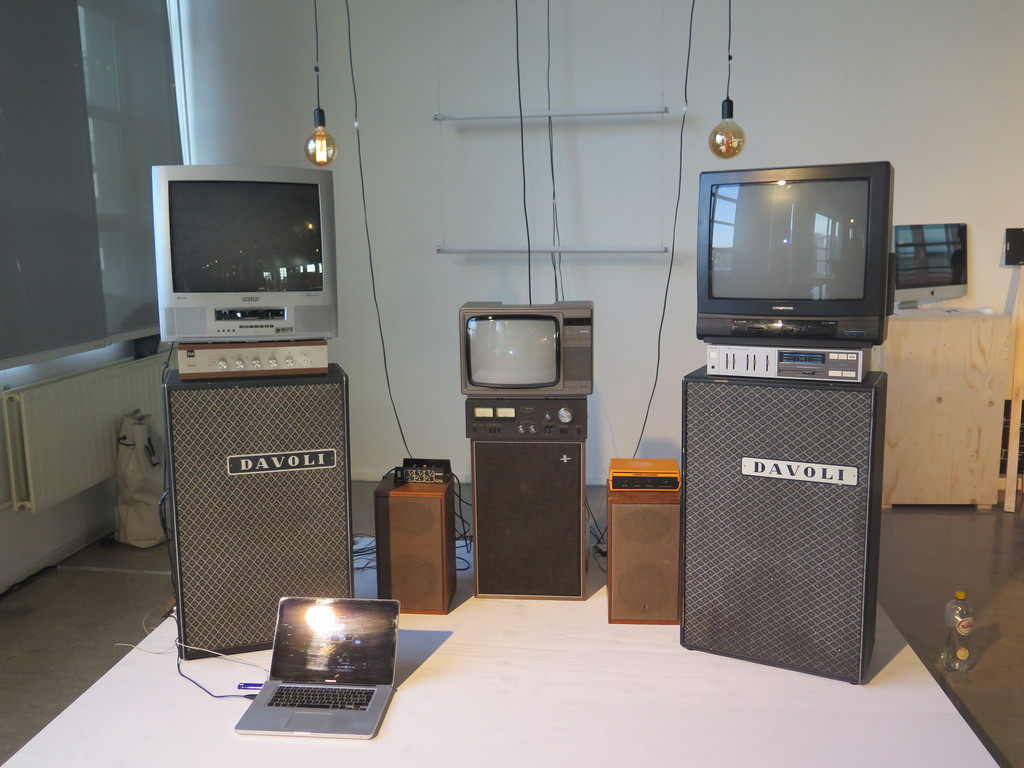 Right! So it turns out i forgot to take a photo of the installation when it was actually turned ON

The first stop is Echoes, by Quentin Péchon. The installation uses CRT (Cathode Ray Tube) tv sets from past decades to visualize sound. The translation of sound into light doesn’t happen through software programm wizardry, but by ‘hacking’ the hardware with an oscilloscope, turning the electric signal into light. The neon lamps blink on the drums, the piano plays with the light bulbs and the bass, guitar and keyboards each have their own television screen. “What you see comes closest to what the soundwave does,” says Quentin. ‘Echoes’ makes the soundtracks resonate in a light show that’s true to the rhythm.

Echoes is an elegant and mesmerizing light orchestra. Everything is electrical and in this everything digital culture, a return to electricity almost feels like magic. 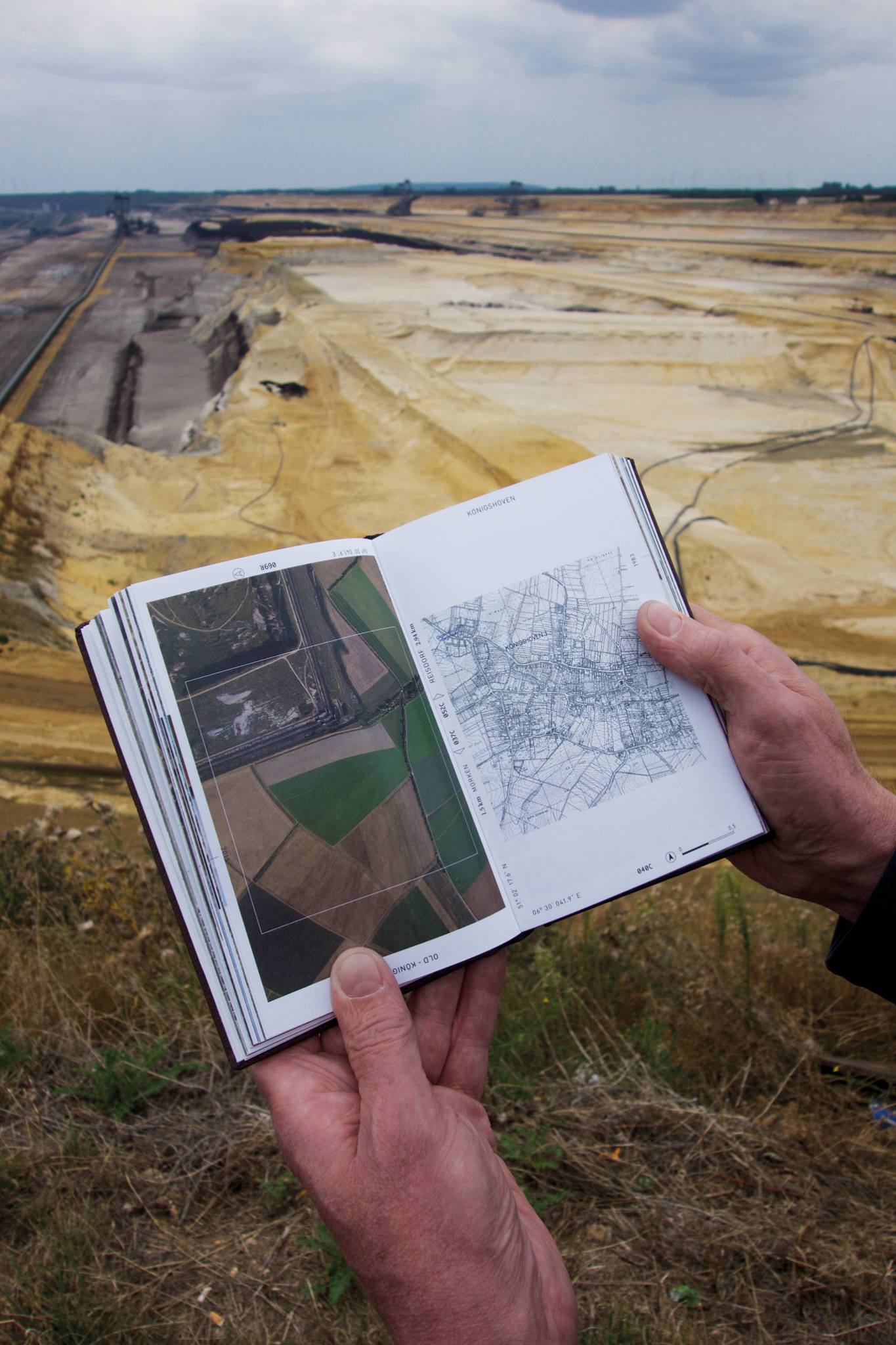 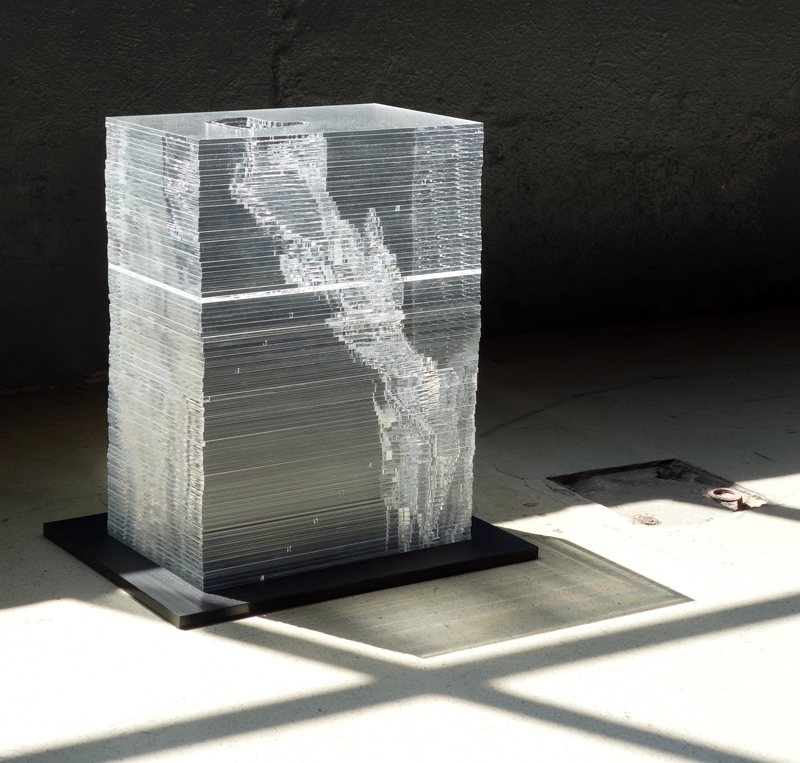 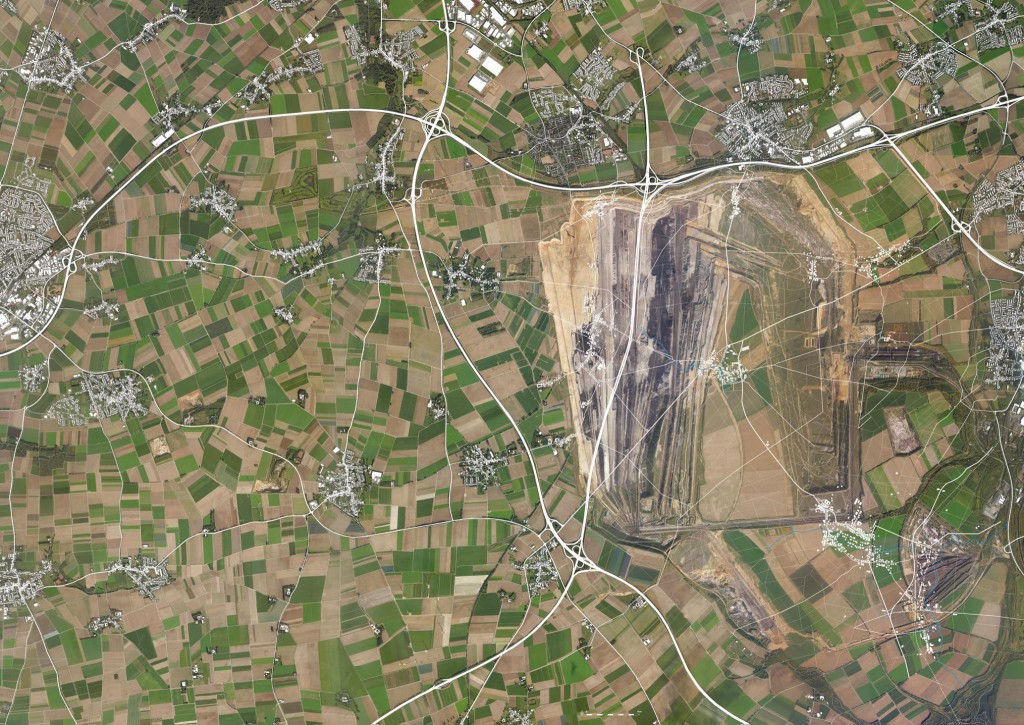 Hannah Hiecke, The Wandering Hole. The map shows the situation in June 2015

Hannah Hiecke’s The Wandering Hole maps and documents Garzweiler II, a brown coal mining hole in Germany. The designer calls this open cast exploitation the ‘wandering’ hole because it eats up the German landscape at the speed of 2,3 cm per hour. Nothing can stop the machines’ steady march. Not even its disastrous ecological impact. Nor the people who protest because their villages find themselves on the way of the excavating machines and have to be relocated. 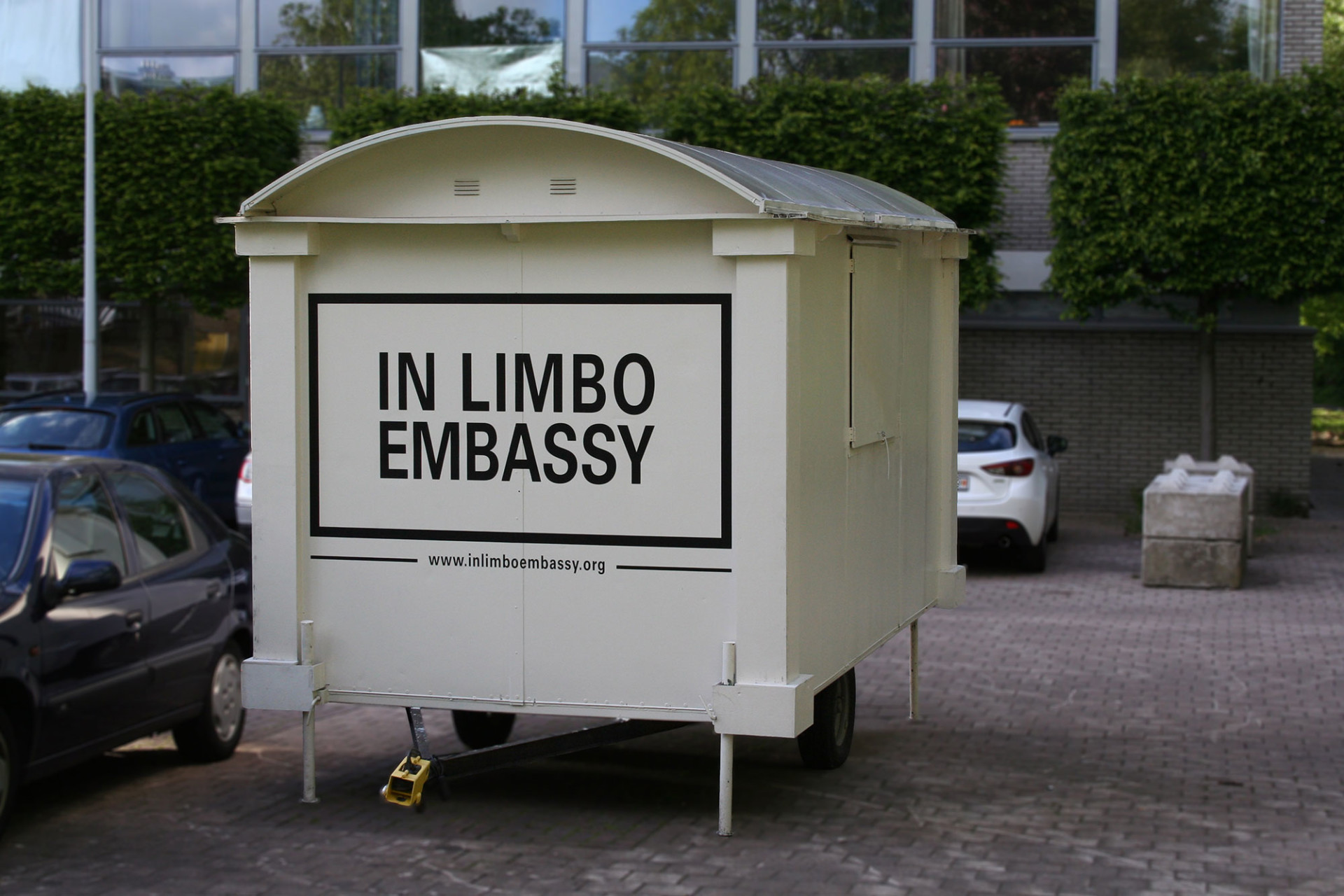 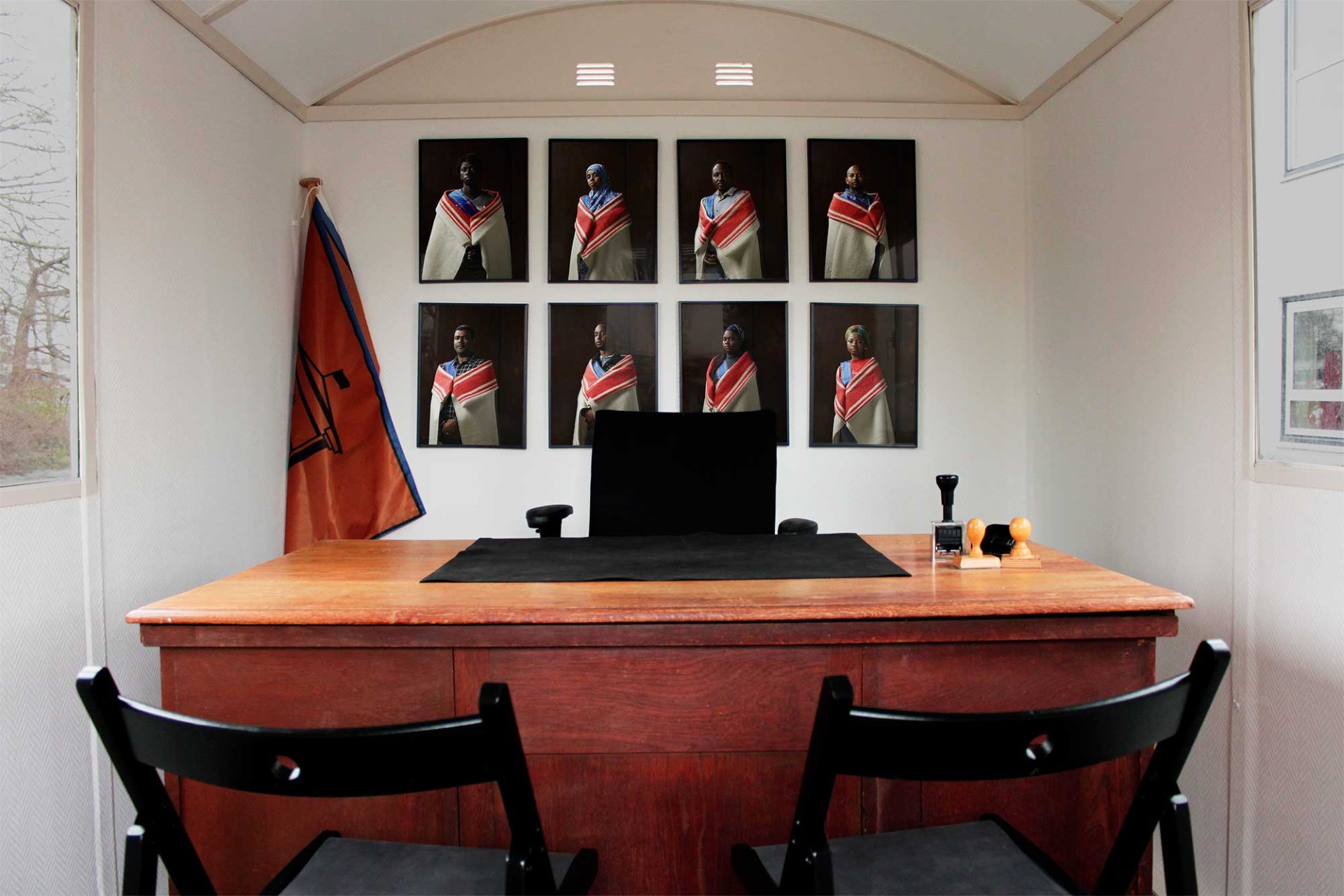 There were quite a few projects dealing with immigration at the show. Some of them fairly perfunctory. I did like Manon van Hoeckel’s In Limbo Embassy very much though. It is a traveling embassy for and by asylum seekers ‘in limbo’: those who cannot stay in Europe but cannot go back to their own country either. The embassy functions as a neutral place where refugees and asylum seekers, acting as ambassadors, invite visitors to discuss about their situation. 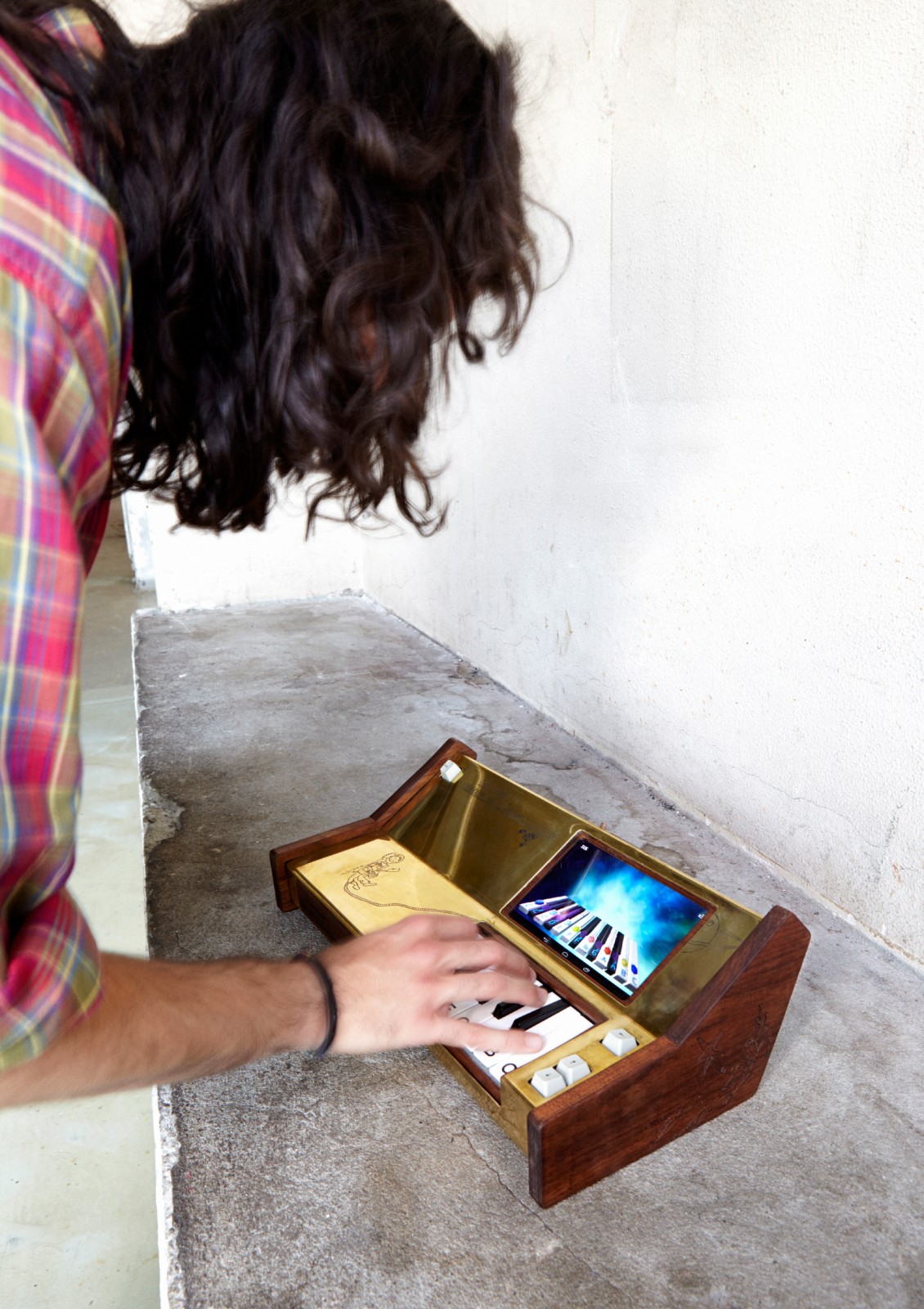 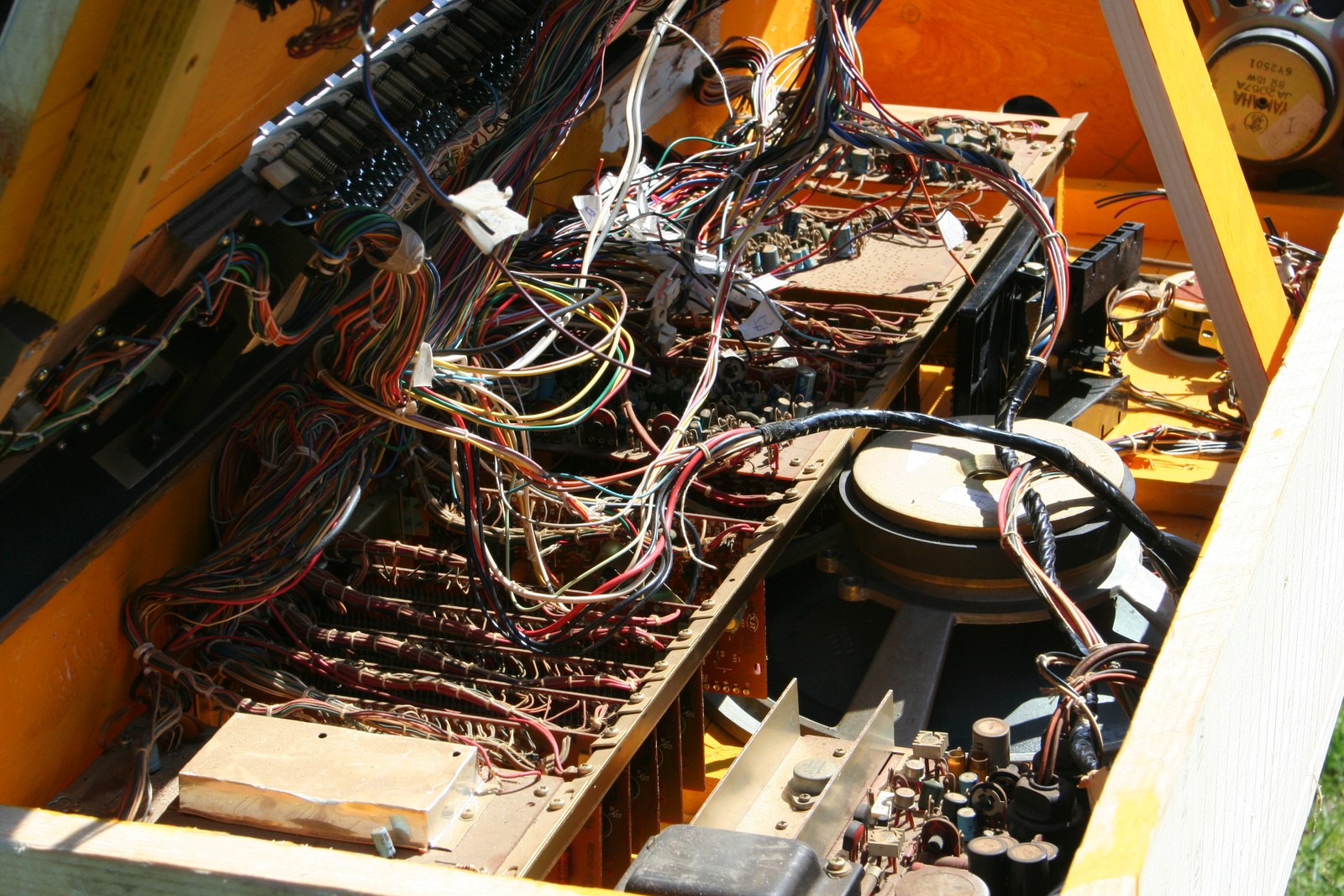 Esserheem is a prison for repeat offenders in Veenhuizen. Jeroen Heeren looked at the way inmates spend their time and found out that many of them would love to learn an instrument. Existing DIY programs require lots of additional cables, devices and control systems. Either that, or the keys have been replaced by a touch screen, which doesn’t convey the feeling of playing a traditional instrument. Jeroen designed a keyboard that features both an innovative software on the inside and real keys on the outside. Easy to borrow at the prison library and ready for instant use without help from a pro. Prisoners can practice by themselves in their cell by playing along with the tunes of the ‘Edelhout’ band or even try solos. If it gets too difficult, they can always hit the Escape key. The project is called THE_”ALL_IN_ONE”_VEENHUIZEN_TIME_FLIES_KEYBOARD_TO_THE_RESCUE. 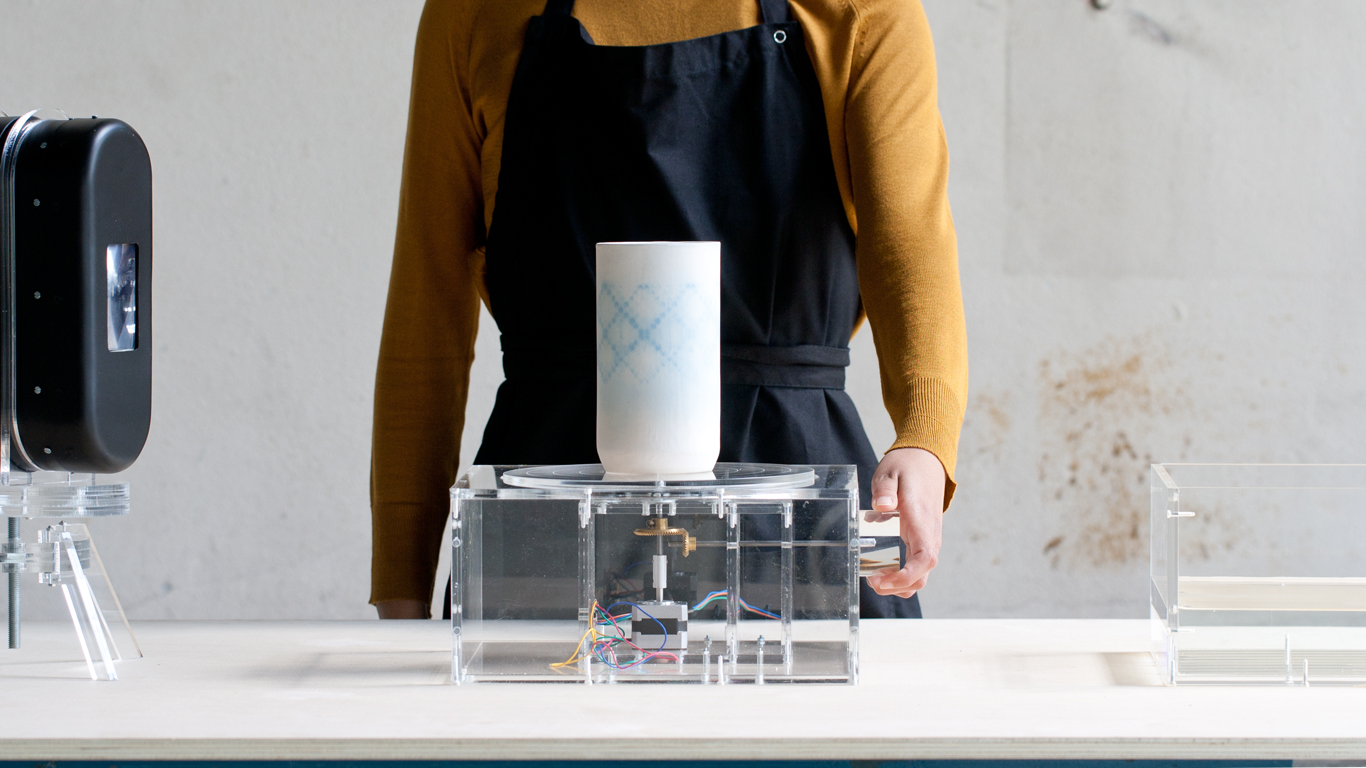 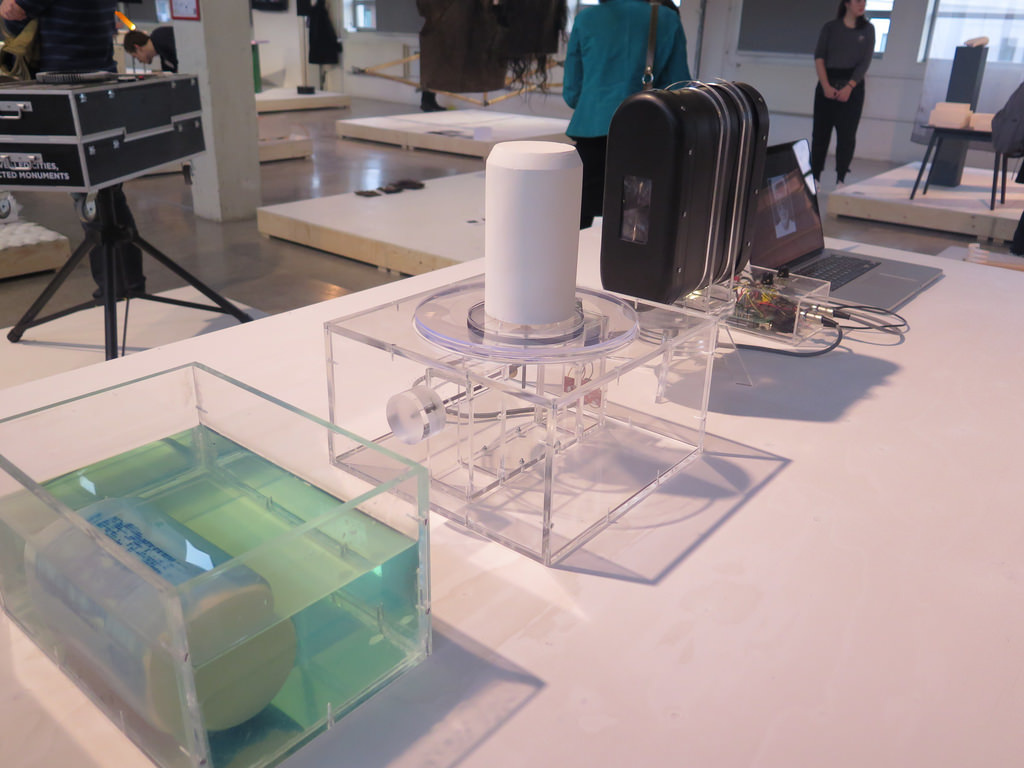 Talking Digital at the graduation exhibition 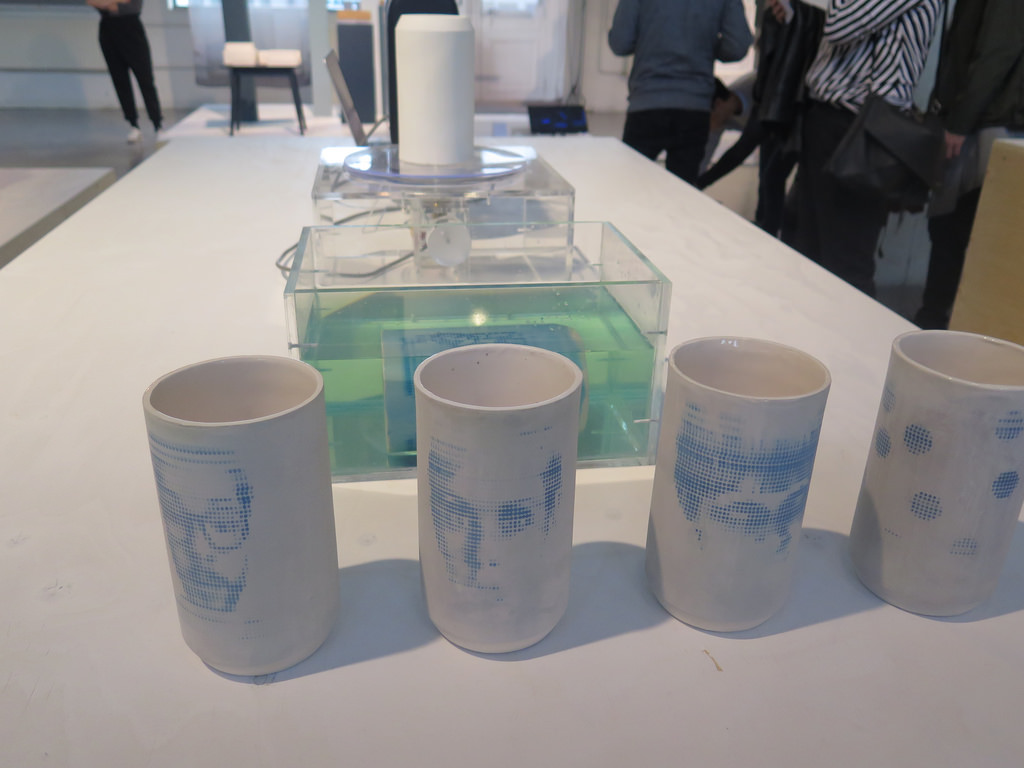 Moritz Pitrowski-Rönitz looked at how older generations approach -or rather do not approach- digital technology. He met with a group of old ceramists who were puzzled by the way digital natives constantly use their phones. The designer used the traditional process of cyanotype photography to merge their craft with the photos produced by smartphone, adding tactile qualities to the digital information by printing it manually on three-dimensional ceramic objects. The machine to support this process allows the user to interact with it both digitally and manually. 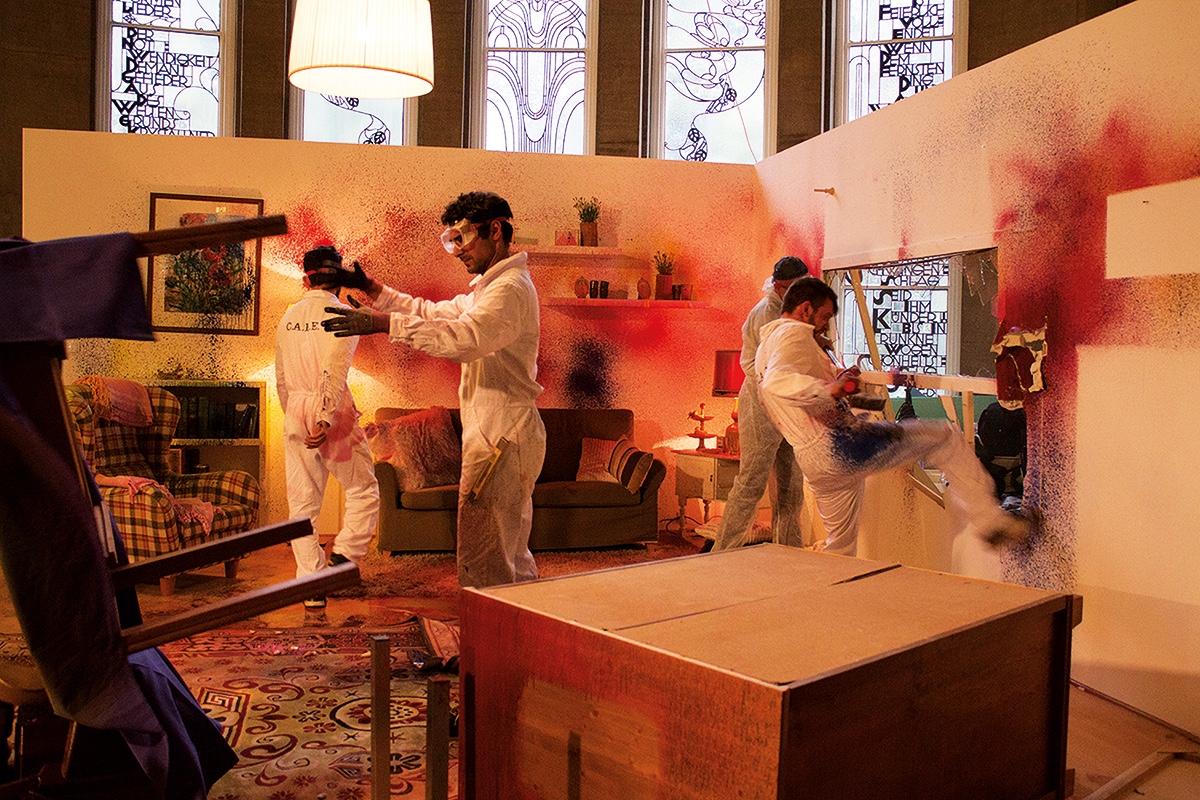 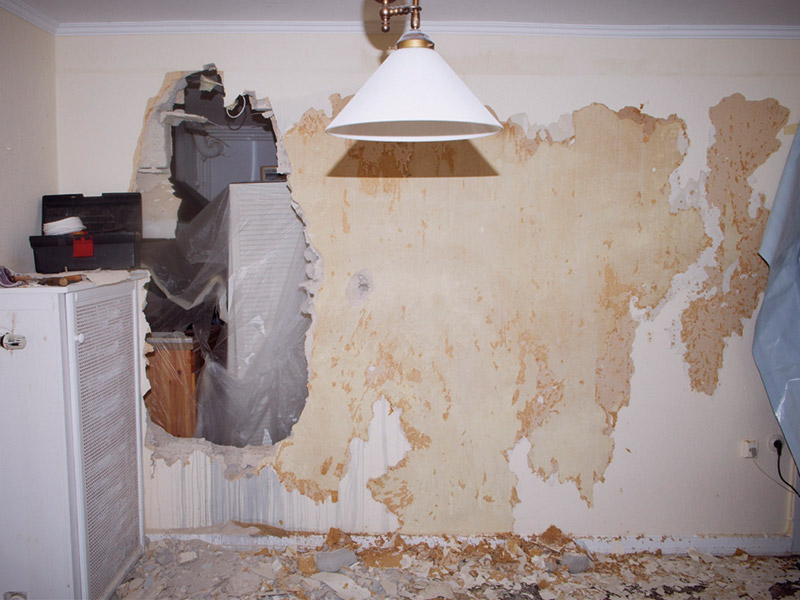 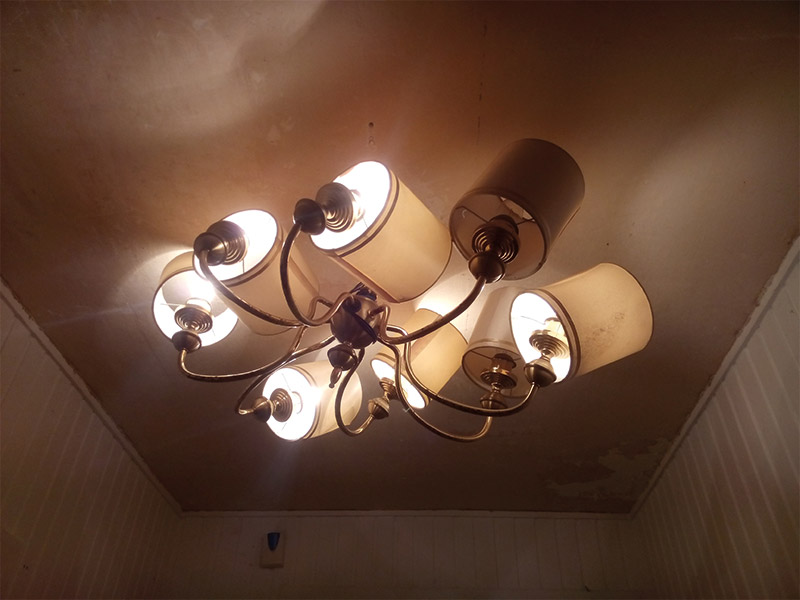 Christine van Meegen‘s Curated Catastrophes service enables people to “regain control” of their home. Blending radical interior design, art intervention and happening, the process pushes the inhabitant out of the home-comfort-zone in order to break their paralyzation and reset the disharmony in the home. This inertia-breaking is initiated by playing the game Trojan House, which guides the player through tasks exploring spaces, experiencing them with different senses or from unusual perspectives. Impressions are recorded by the user into a personal logbook: a first step toward regaining control of one’s surroundings through deconstructing them and a basis for further cooperation with the studio. In the next steps of the relationship C.A.R.E. provides tailored instructions to implement an empathetic reconstruction of the interior. This is meant to alter our attitudes towards conflictual spaces, applying an approach similar to gardening: what is useless is cut out, what is helpful will be grown, and a healthy attitude toward failure, imperfection, and individual expression is achieved.

My photo album of the Dutch Design Week.