High Static, Dead Lines. Sonic Spectres & the Object Hereafter, by Kristen Gallerneaux, an artist, sonic researcher and a curator at the Henry Ford Museum in Dearborn in the United States. 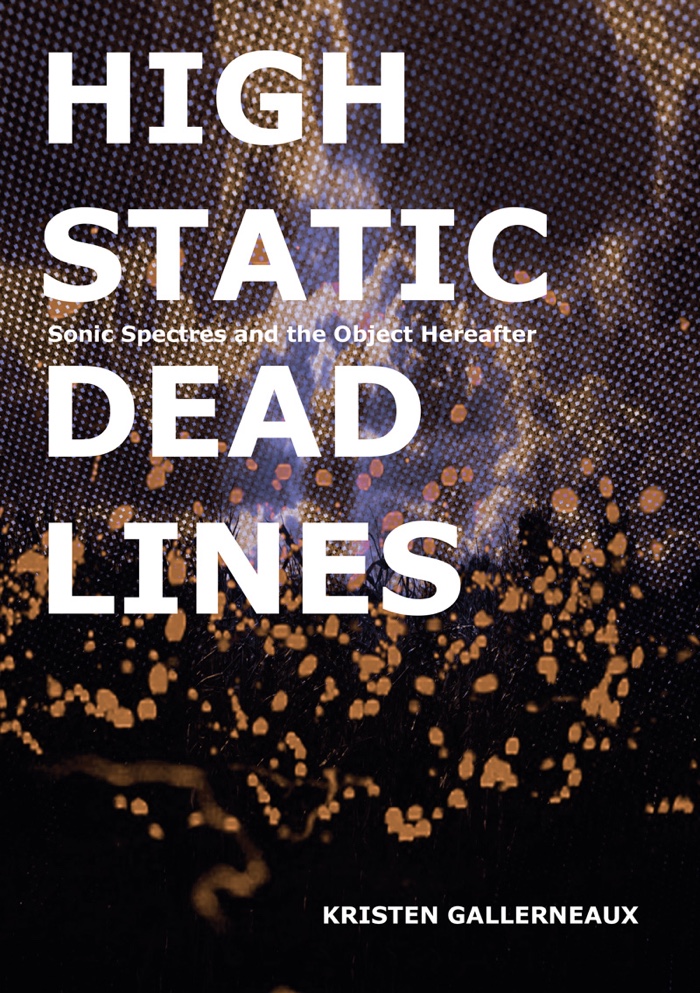 Publisher MIT Press writes: Trees rigged up to the wireless radio heavens. A fax machine used to decode the language of hurricanes. A broadcast ghost that hijacked a television station to terrorize a city. A failed computer factory in the desert with a slap-back echo resounding into ruin.

In High Static, Dead Lines, media historian and artist Kristen Gallerneaux weaves a literary mix tape that explores the entwined boundaries between sound, material culture, landscape, and esoteric belief. Essays and fictocritical interludes are arranged to evoke a network of ley lines for the “sonic spectre” to travel through—a hypothetical presence that manifests itself as an invisible layer of noise alongside the conventional histories of technological artifacts.

The objects and stories within span from the mid-nineteenth century to the present day, touching upon military, communications, and cultural history. A connective thread is the recurring presence of sound—audible, self-generative, and remembered—charting the contentious sonic histories of paranormal culture. 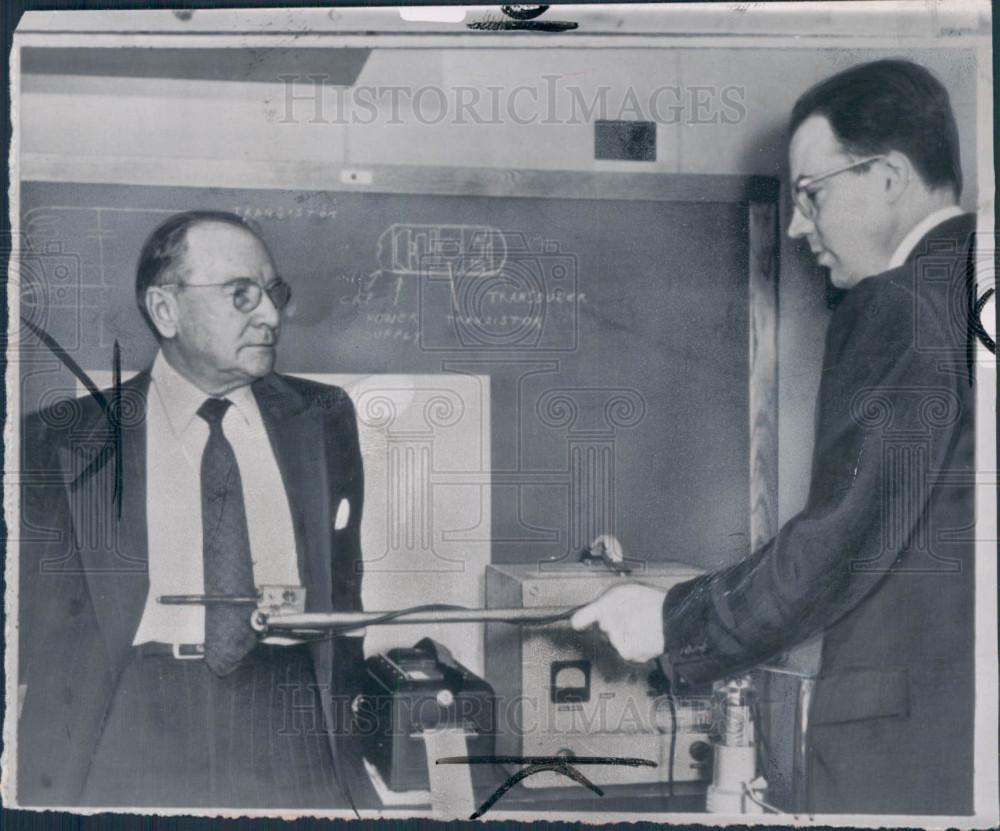 Dr. John Farrar using an FM antenna to pick up radio waves from a pill as it passes through Dr. Vladimir Zworykin, 1957. Photo

In 1924, as Mars drew near Earth’s orbit, Charles Francis Jenkins, an American pioneer of early cinema with his Phantoscope and one of the inventors of television, teamed up with Dr. David Todd for an attempt to “listen to Mars”. The whole country collaborated in the experiment. A military-imposed radio silence ensured that Jenkin’s Radio Camera, an apparatus that could picturize sound produced by radio phenomena, had a chance to detect signals from Martians trying to communicate with us. The US Naval Observatory cooperated too by sending an antenna 3,000 meters above ground in a dirigible pointed to Mars. After 3 days of recordings, the film was developed, the dots and dashes on the image were analyzed but Jenkins had to conclude that they didn’t constitute a message from outerspace. 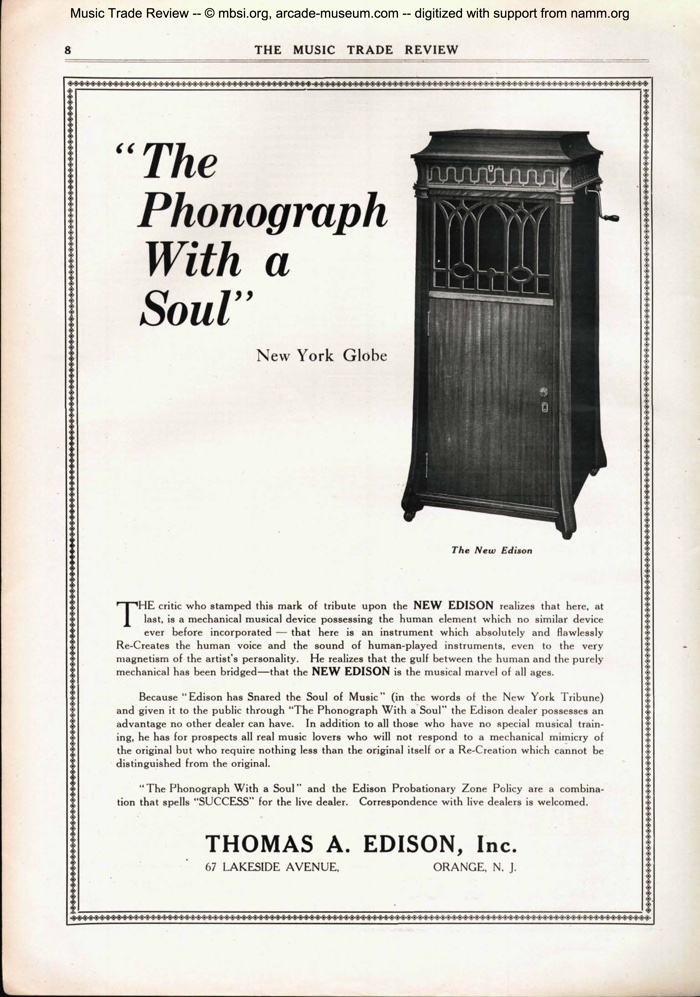 Still in the 1920s, psychologist Walter Van Dyke Bingham worked with Thomas Edison to study the effects that music has on the moods of human beings. His “Mood Music” study became the basis of a marketing campaign to sell phonographs to customers on the idea of holding social ‘mood changing parties’. The New Edison, the Phonograph with a soul was born!

In 1932, inventor A. B. Saliger patented a device he called Automatic Time-Controlled Suggestion Machine. The machine, more commonly known under the name Psycho-phone was a kind of phonograph which played recordings during sleep. Saliger made a fortune promising his clients that the messages would enter their unconscious and have a powerful influence on their behavior and help them be more successful in life and in love.

Kristen Gallerneaux‘s book is a fascinating exploration of the ‘shadow world’ of communication devices. High Static, Dead Lines weaves together the histories of media and material culture with superstitions, conspiracies, quests for ghosts and the exploitation of our misunderstanding of communication technologies.

The real walks hand in hand with the dubious and the mysterious. One moment you learn about the invention of muzak, the swallowable radio, the woman who set the record for high altitude communication and the urban legend of the mass burial of unsold Atari video game cartridges. Next, a fridge throws a cabbage at a little girl, Poltergeists are all around you and devices are inhabited with spiritual resonance.

“Finding ways to allow our media to haunt us is crucial to understanding it,” writes the author. Gallerneaux reminds us that it’s ok to be irrational when confronted with new technologies. She doesn’t seem to pass any judgement whatsoever on the appeal that the supernatural might have on perfectly balanced minds. We might look with amusement at the historical examples of human gullibility described in the book but i doubt we are much wiser today. The inner functions of our devices are getting more opaque with each new model and the power communication technologies have over our lives is more mystifying than ever.

I can’t recommend enough that you check out Nicolas Nova‘s contribution to the 2017 edition of the Mapping festival if you’re interested in that topic:

I have two minor criticisms. The first one is that i wish the book were illustrated with photos of the devices and the experiments (when available). The second is that the texts don’t follow a clear chronology nor logic. Now i do realize that this is part of its charm and that the non-narrative strategy leaves space for imagination to expand beyond the pages but i sometimes found it challenging to follow the narrative.