A few weeks ago, I had a chance to visit The New Art Fest, a new media art festival in Lisbon that invites the public to look critically at the way technology and science are transforming society. 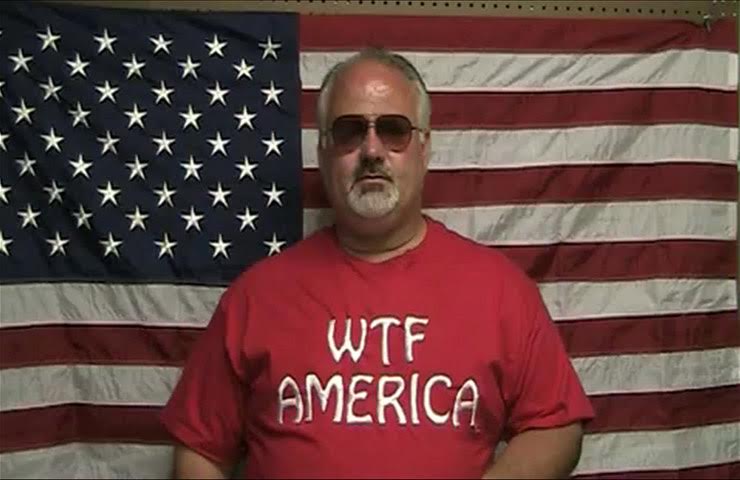 Natalie Bookchin, still from Now he’s out in public and everyone can see, 2017

The theme of the 3rd edition of the festival, “AMERICA ONLINE & NET GENERATION”, looked closely at the digital art of the American continent from the beginnings of electronic art, through the emergence of the internet, to these days of post-internet art.

The theme is both a celebration of the role that the USA has played in the development of the internet and an opportunity to reflect on the fact that the so-called American century is drawing to an end with the rise of China as a superpower and Carrot Trump’s politics of isolationism.

Unfortunately, when the plane landed in Lisbon, several of the chapters of the festival had already closed: the exhibition dedicated to the archives of turbulence (a much-missed organisation that commissioned networked art forms), the Maker Art event that brought together media art and art market, video and film sessions as well as several discussions about data, gentrification, etc. I missed all that. I did however get to visit the Hands-On exhibition at the spectacularly charming Museu Nacional de História Natural e da Ciência. 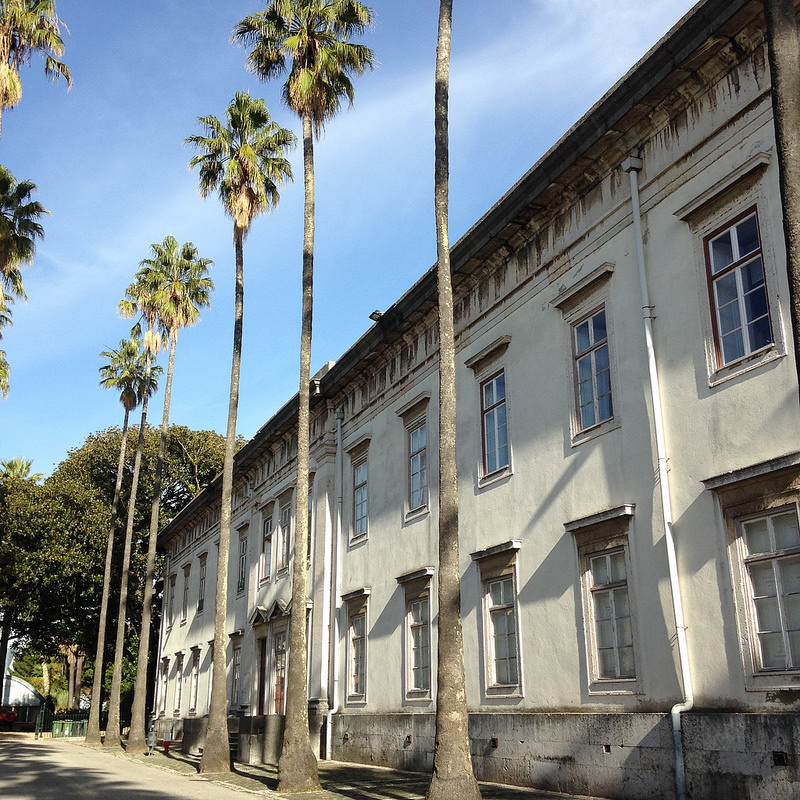 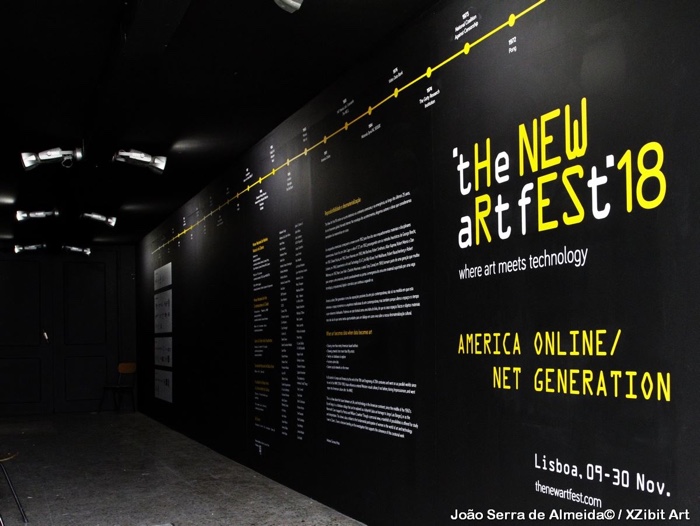 The exhibition gives a broad and ambitious overview of online art developed in America since 1994 while also trying to ponder upon the forms and meaning of arts that dematerialize, become unstable and are stored in databases, servers and “clouds”.

Hands-On multiplied the perspectives and reminded us that America is not just the USA (as we often think) but the totality of the continents of North and South America. There were dozens of works on show. I’m going to skip the historical ones and focus on recent films, performances and installations that i found particularly worth sharing with you: 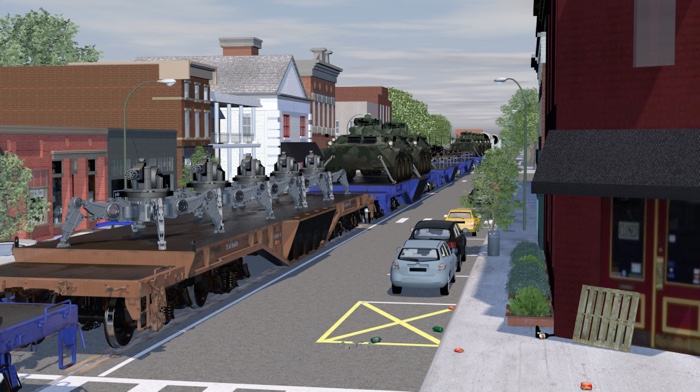 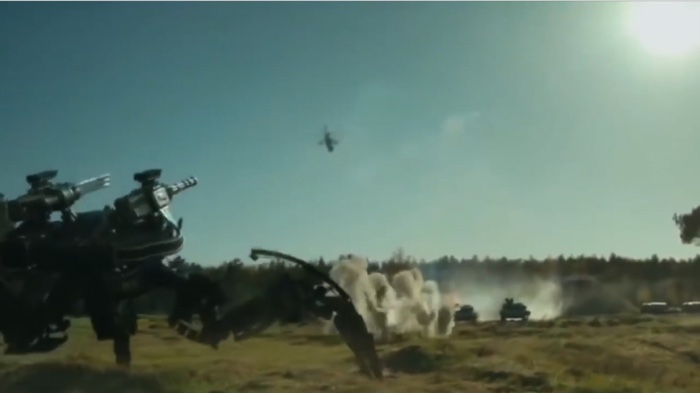 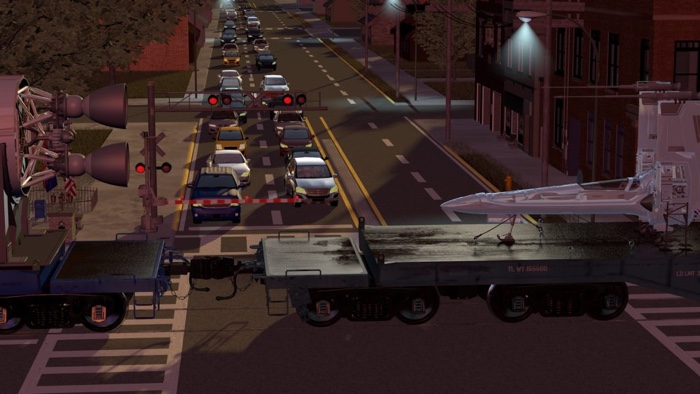 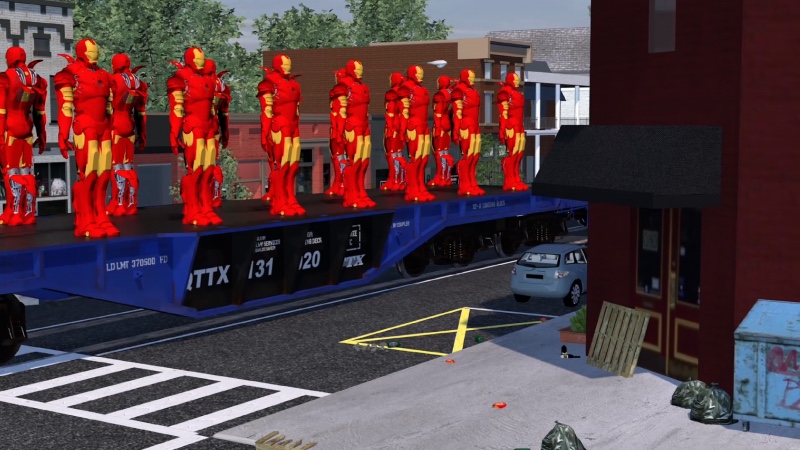 Like most visitors on the day i visited the show, I was captivated by Ken Rinaldo’s The Continuous War Train. The 3D animation shows a never-ending American freight train, pulling Humvees, helicopters, tanks, jets, exoskeletons, drones, missiles and other sophisticated military equipment through an empty Midwestern town.

In the background, glimpses of a derelict farmhouse, litter tossed on the pavement or a second-hand shop on the main street highlight the disconnect between a tantacular American military-industrial complex and the everyday reality for American citizens; between massive military budgets and a society that cruelly lacks public funding for education, environment and healthcare.

The continuous war train elements are interspersed with actual footage of military arms trade, with 3D animation allusions to contemporary film superheroes, historical and contemporary footage of wars. The juxtaposition reminds us of the role of the entertainment industry in selling us a vision of the military made of action heroes, glory and patriotism, while civilians are killed in U.S. military attacks and suicide is rife among U.S. soldiers and war veterans.

“The Pentagon’s numbers show that during George W. Bush’s eight years he averaged 24 bombs dropped per day, which is 8,750 per year,” the artist writes. “During Obama’s time in office, the military dropped 34 bombs per day or 12,500 per year. And in Trump’s first year in office, he averaged 121 bombs dropped per day, for an annual total of 44,096 or one every 12 minutes.” 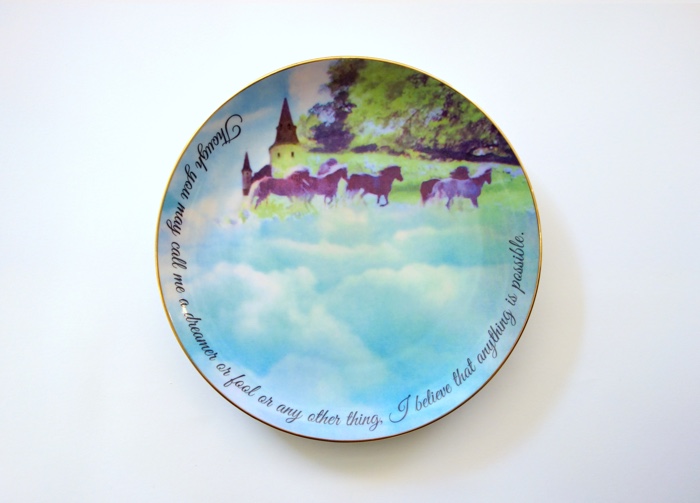 Sophia Brueckner, Captured by an Algorithm, 2012 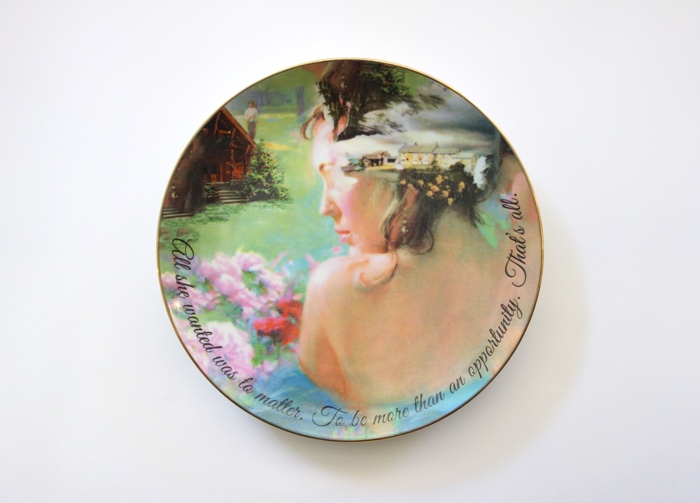 Sophia Brueckner, Captured by an Algorithm, 2012

Sophia Brueckner applied Photomerge (a Photoshop algorithm that stitches together photos into panoramas), to the covers of over 100 romance e-novel. Because the covers are so similar to each other and seem to naturally overlap, the algorithm ended up creating corny landscapes that strike the right balance between the slightly bizarre, the cliché and the romantic. The artist printed these landscapes on porcelain plates. Each plate also features Kindle Popular Highlights from these romance novels. “All she wanted was to matter. She wanted to be more than an opportunity. That’s all.” or “Though you may call me a dreamer or fool or any other thing, I believe that anything is possible…” are among the literary gems bordering the plates.

Captured by an Algorithm is an absurd and convincing demonstration of what algorithms can do. Right now they are not perfect. They might even be slightly ridiculous but they increasingly challenge our idea of human creativity.

Natalie Bookchin, Now he’s out in public and everyone can see (trailer), 2017

Among her latest works are collages made of extracts from YouTube videos that have been watched by only a handful of viewers. Her aim is to weave connections and associations that no algorithm would ever make. The result is incredibly moving. The films show a middle class America that feels increasingly marginalized and that uses online platforms in lieu of a physical public space that has disappeared.

Now he’s out in public and everyone can see compiles excerpts from hundreds of vlogs by people who start by saying “I’m not racist or anything” and then give their opinion about media scandals surrounding an African American public figure whose identity we don’t know. Although the work was first shown in 2012, it was already showing how bitter many U.S. citizens were when confronted with a supposedly ‘post-racial’ society and a head of state who wasn’t quite white enough.

Perhaps even more poignant, Long Story Short examines the personal and collective experience of poverty, social fragility and wealth inequality in America through direct-to-camera interviews the artist made with over 100 people. She met them in homeless shelters, food banks, adult literacy programs and job training centers in California, one of the richest regions in the U.S. and one where wealth inequality is particularly jarring.

“To make the archive, I borrow tools and forms of technology — including webcams and laptops — to highlight the voices of those left beyond during the technology boom,” the artist told The Chart. “In the 20 years or so that the internet has been publicly available, it has helped create extraordinary wealth for a few, while many others have lost jobs or job security, widening the already large gap between the rich and the poor. Much of this concentrated wealth is in Northern California, the home of the technology boom.”

The Santa Rosa Storm occurs in the Southern Hemisphere around the time of the festival of Santa Rosa of Lima, Perú, celebrated on August 30 each year. According to the legend, Rosa de Lima caused a storm so powerful that it prevented Dutch pirates from attacking the city of Lima in 1615. Meteorologists attribute the storm to the clash of the first warm winds which are a product of the arrival of spring with cold fronts.

Brian Mackern recorded the radioelectric interferences caused by the Santa Rosa Storm in 2002, in Montevideo-Uruguay. He uses and manipulates these recordings during performances that reveal the presence of the storm through the ‘noise’ present within the signal. Paradoxically, this ‘noise’ is the ‘signal’ which defines the information to us: The existence of the storm itself.

Museu dos [corpos] invisíveis (Museum of invisible [bodies]) is a series of mini-docs about the city of São Paulo. The films makes more visible a series of people and realities that form an integral part of the urban fabric. Yet, their importance is left at the margin of contemporary discourses about urban life: gender policies, feminism, racial segregation, periphery, vigilance, emergency, queer tribes and life on the streets. 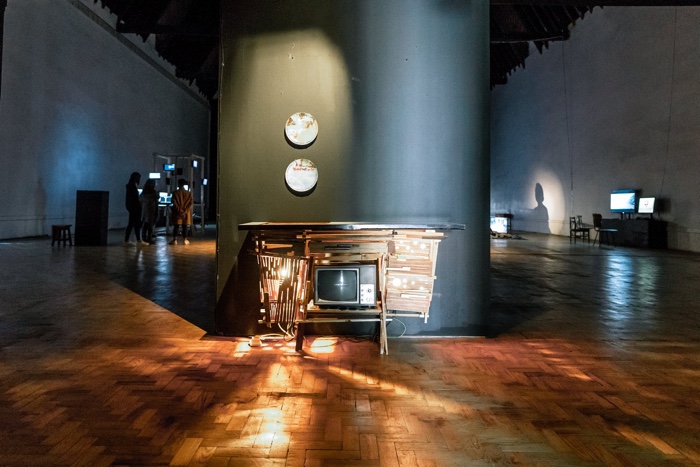 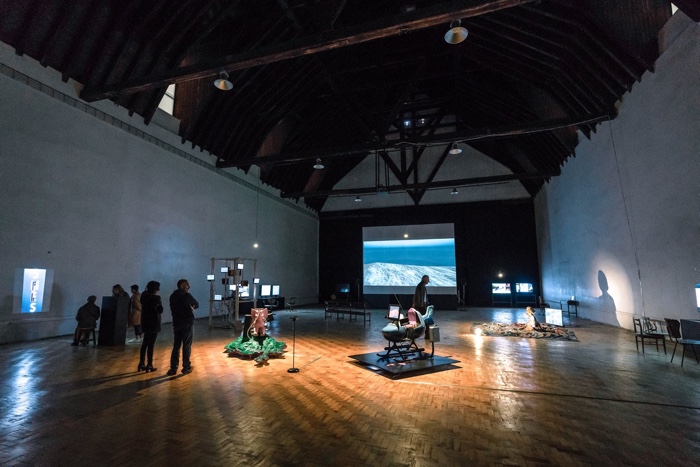 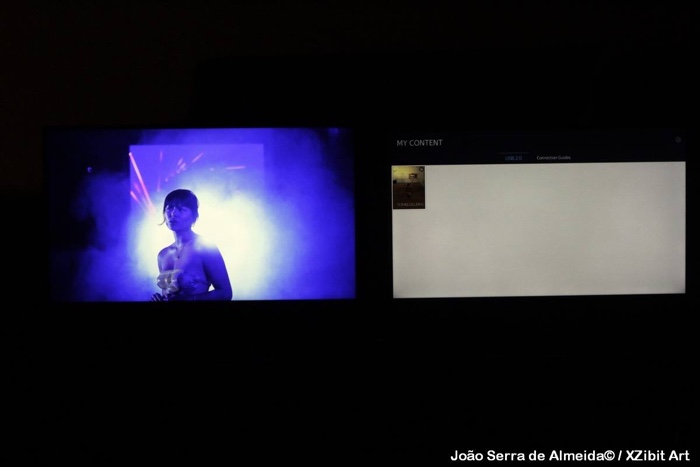 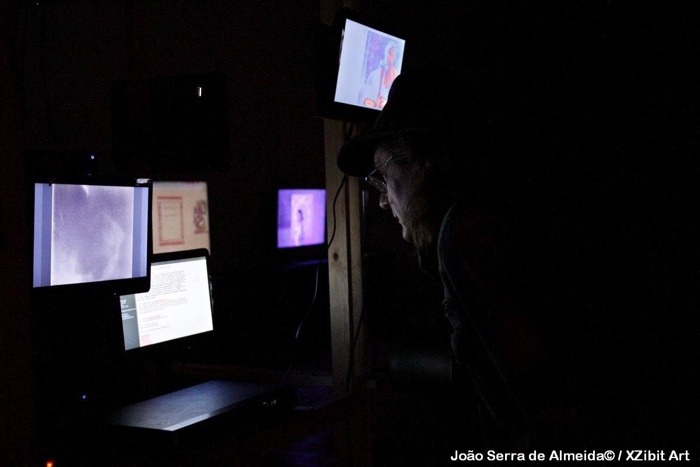 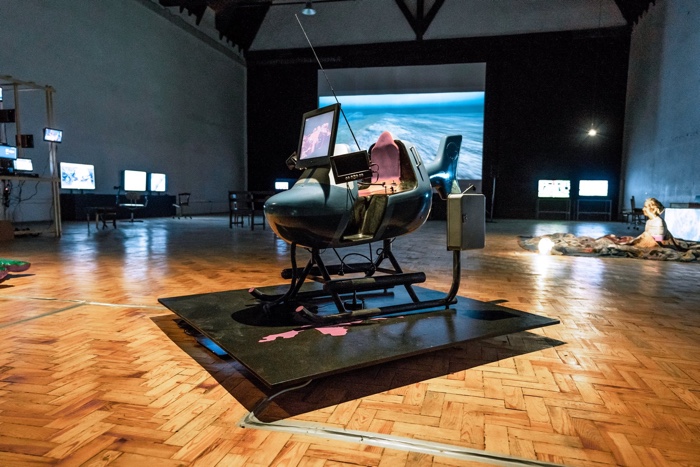 The New Art Fest has sadly closed. The festival was curated by artistic director António Cerveira Pinto, with guest curators Brian Mackern, Gustavo Romano and Nilo Casares, with the special collaboration from MEIAC. Production and communication by Ocupart.