Ghostradio, by Pamela Neuwirth, Franz Xaver and Markus Decker, is a physical mechanism that generates random numbers through chance. The works is an intriguing comment on the mass-surveillance of our everyday digital moves:

At the moment, information exchanges on the internet are either in plaintext, or they use, for ‘secure’ transmission, encryption. For cryptograpic methods to be safe it is essential to create a very good random key. Usually these keys are produced by pseudorandom generators. As they are produced by algorithms, they are not really random, and can be outguessed with the help of powerful computers.

And this is where ghostradio comes in. The device produces real random numbers. Referring to the use of chance in art and to the Second Order cybernetics of Heinz von Förster, Ghostradio deploys feedback and quantum effects to create random numbers from the boundaries of reality and beyond. Ghostradio publishes the resulting random number datastream for the generation of cryptographic keys. This will release the public from the current state of surveillance. 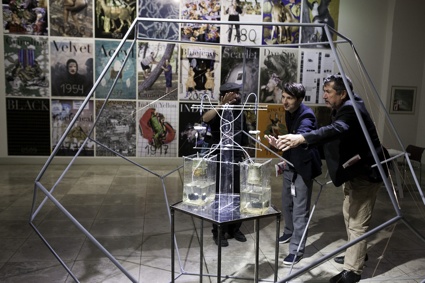 I discovered Ghostradio a few weeks ago in Riga. The installation was part of Fields – patterns of social, scientific, and technological transformations, an
exhibition featuring works by artists who adopt an engaged, critical and active role in society.

Ghostradio sounded suitably mysterious and dark. So i contacted the artists for a quick Q&A: 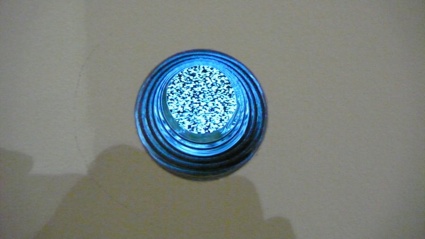 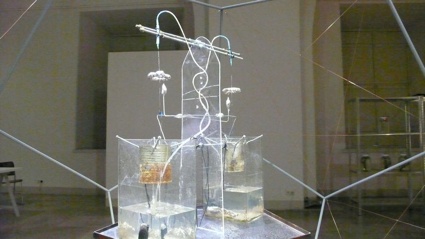 What makes the random number produced by the ghostradio more ‘real’ than the random key usually produced to ensure the safety of cryptographic communication?

The ghostradio randomness is not more real than the randomness calculated in industry made computers. But it is a different approach and the mechanism has a systematic and theoretical complexity but is technically easy to understand. This prevents manipulative elements to be inserted in, so backdoors are unlikely, compared to the calculations of randomness, where someone needs higher math knowledge to understand the mechanisms.

With the ghostradio project we try to discuss this issues of trust, which underlies such security structures, either you believe in the security of a system or not. You, as a untrained person, will never know. We personally rather distrust all public known models of the crypto warfare, than believe in it, and that was the motivation to dig into this field.

Funnily enough, we do see this relationship of trust everywhere in our constructed reality. Maybe today’s most prominent religious system is, for instance, the banking sector. This makes us think about dollar note in the movie They Live. 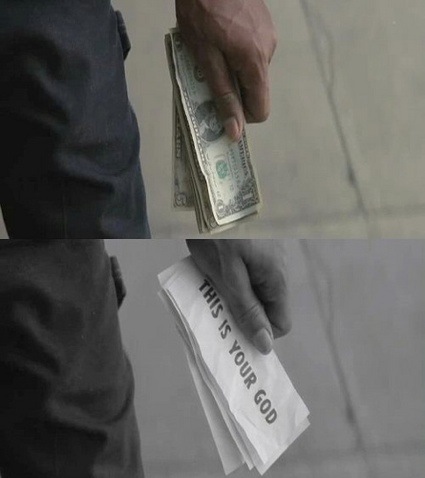 Stills from the movie They Live

The project description mentions that “we are publishing this random numbers datastream for cryptographic key generation.” Where are you publishing it? Can we get access to it?

Yes, we publish each day, as long as a exhibition lasts and therefore the ghostradio mechanism is in service, a 2gb random binary on the web. You can access it via the address http://www.firstfloor.org/ghostradio/web/random.html and each month we do a special signal radio broadcast on air, on the local radio station FRO, and distribute a 2h long random signal of our prototype machines.

Can you describe the exhibition setting? What it is made of and what is the purpose of each part?

ghostradio is a metaphysical geometric setup. We do have a feedback noise signal accelerated to the speed of light. This signal is broadcast over 3 metaphysical antennas,
the pentagram antennas. Two of these antennas are an active sender transmitter couple, the third one is a mirror. This electromagnetic field is crossing the electrostatic field
of a Lord Kelvin thunderstorm generator, a device able to generate electricity out of the gravity of water drops.

The light speed and the antennas open a string into the multiverse of our doppelgänger, we know nothing about, the ghost. the thunderstorm generator is a source of uncertainty,
the dodecahedron building is conductive and is a faraday cage. 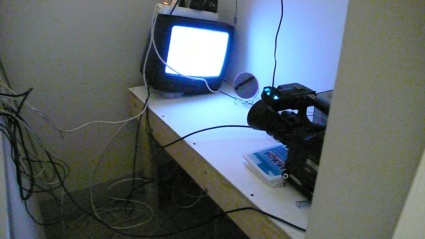 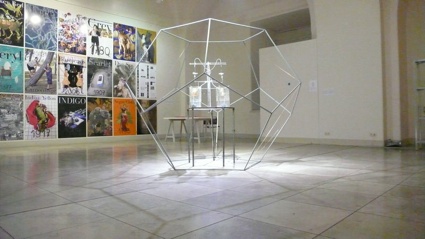 I was interested by the fact that the text that describes the work focuses on the need to protect ourselves from surveillance rather than piracy. Is surveillance the new/another form of piracy?

In the daily communication experience, surveillance interface technologies are invasive. Piracy on the other hand are matters of corporate politics, concerned about their market shares, and so on. In that sense, both terminologies for us are not directly comparable. Although the corporations and the surveillance space serve each other.

In legal terms we do see the mass-surveillance as a criminal constant, that goes along with the constant state of emergency and might be legally for a state within the material law. Otherwise we don’t see much difference to the act of piracy.

As supporters of the idea of a open information society we do like the utopia of the free information flow, where all data are save and there’s no need to protect them because no one is after them. In that sense the communication is safe but not private, a trustful relationship in a fictional open knowledge-based society.

Check out the ghostradio at the Fields exhibition, produced by RIXC and curated by Raitis Smits, Rasa Smite and Armin Medosch. The show remains open at Arsenals Exhibition Hall of the Latvian National Arts Museum (LNAM) in Riga until August 3, 2014.

Other posts about the Fields exhibition: On the interplay between a snail and an algorithm and FIELDS, positive visions for the future.