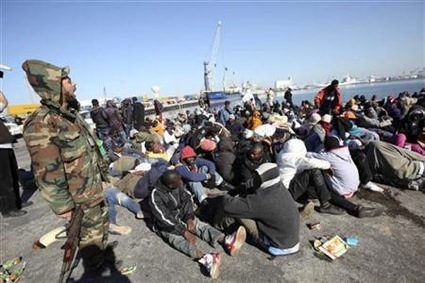 Migrants from sub-Saharan Africa await processing in the port of Tripoli after attempting to cross the Mediterranean Sea to Europe December 5, 2011. Credit: Reuters/Ismail Zitouny

Forensic Oceanography is a research project started in 2011 by Lorenzo Pezzani and Charles Heller to investigate the militarised border regime in the Mediterranean Sea, and document the violence perpetrated against migrants attempting to cross the liquid border.

The sea, and in particular the Mediterranean, is a space of escape for thousands of people who leave the African continent in hope of a safer life in Europe. It is also a space of control and thus a political space. Much of what happens on the surface of that liquid political space takes place far away from the public gaze and often remains unaccounted for. However, the sea is closely surveilled, information about what happens and what sails through it is being generated, analyzed and recorded. 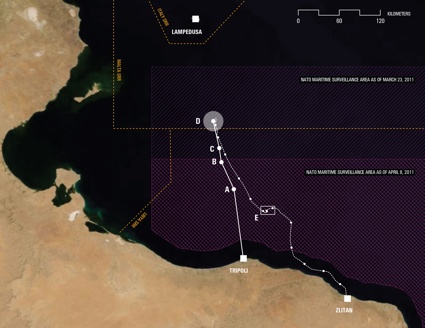 Chain of events as reconstructed for the FO report 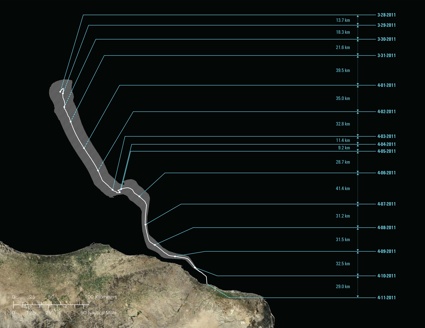 Drift model providing hourly positions of the vessel. The drift trajectory was reconstructed by analyzing data on winds and currents collected by buoys in the Strait of Sicily

Forensic Oceanography looks at the sea as a witness to interrogate and cross-examine, re-purposing data and technologies initially produced as evidence of illegal migration and turning it into evidence of a crime of non assistance.

Lorenzo Pezzani was at The Lighthouse in Brighton a few weeks ago to talk about Forensic Oceanography and more particularly about the case of 72 migrants who had been left to die while they were attempting to flee Libya and reach the Italian shores during the Libyan conflict of 2011.

The Mediterranean is a fairly crowded sea and Western military forces were made aware of the refugees’ distress shortly after the dinghy’s departure when the captain lost control of the boat and called for help. The Italian coast guards received the appeal and relayed it, along with the position of the boat, to the NATO coordination centre and to military vessels present in the area. The distress calls were repeated every 4 hours for 10 days. But no-one came to their assistance. The dinghy was seen by an airplane, military helicopters, two fishing vessels and a large military vessel, which ignored their distress signals. After 15 days adrift, the boat washed up on the Libyan coast with only 11 survivors on board, two of whom died shortly afterwards. FO call the case, the ‘left-to-die boat‘.

Here’s Liquid Traces, a short film which sums up the case.

And the video of Pezzani’s presentation at The Lighthouse. It was a great evening. He talked about how a journey at sea is fast for goods and for privileged passengers but excruciatingly slow for the unwanted, about the dilemma of producing evidence to account for violence while trying not to be complicit with governments, about FO new project to make and distribute to migrants leaflets containing legal information about their rights, etc. 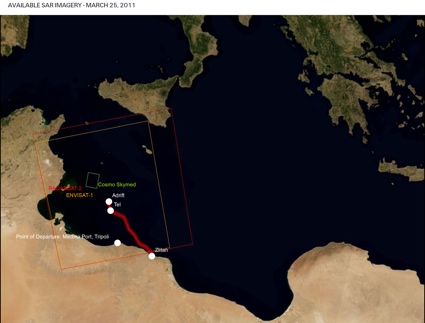