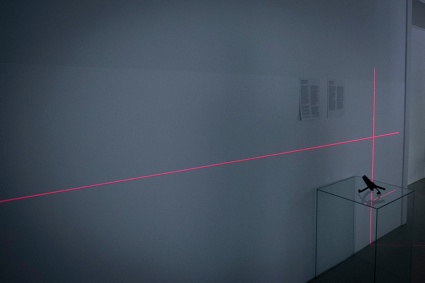 Over the past two years, artist Daniela de Paulis has been working with radio astronomers, radio amateurs, neuroscientists and philosophers to develop Cogito, a research project that speculates on the creative and philosophical possibilities of exploring the cosmos by means of radio waves.

She presented the first chapter of her work at BIO 50, the 24th Biennial of Design that opened a few weeks ago in Ljubljana. Cogito was part of a group of projects that explore new ways for human to connect with and explore outer space.

On the opening day of the biennial, visitors were invited to put on a light Brain-Computer Interface headset. Their brain waves were then recorded as they walked and thought across the exhibition space. This collective performative thinking will later be converted into radio waves and transmitted as collective consciousness – and subconsciousness into space. The event will be streamed in real time as audio visual performance from the cabin of the Dwingeloo radio telescope in The Netherlands. 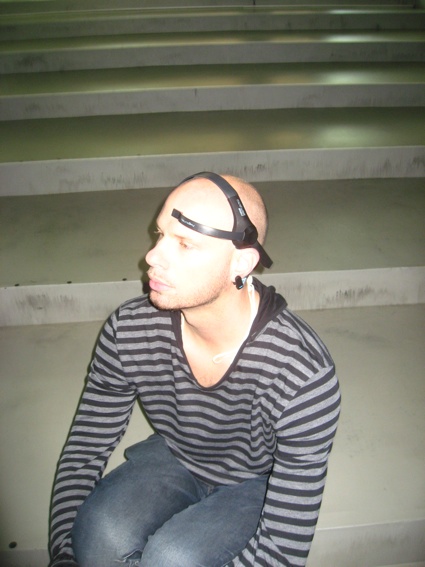 The title of the project obviously refers to the ongoing debate on mind-body-consciousness, and to Descartes’ dualistic vision on the mind-body matter. And that’s when it gets interesting:

Some scholars argue that the computer age contributed in reviving this debate thanks to the new prominent role of the technological mind. Also recent experiments in quantum physics seem to suggest extraordinary links between the matter of the mind and that of the cosmos, raising profound questions on the nature of consciousness and perception. Sending thoughts into outer space is a symbolic action for shifting our consciousness from the earth-centred perspective, to the cosmos-wide perspective, whilst questioning the mathematical notion of intelligence, as conceived by some relevant SETI (Search for Extraterrestrial Intelligence) researchers.
Thinking is more than logical reasoning and can communicate much more about our nature to a potential extraterrestrial life, should it be able to decode our EEG signals.

I contacted Daniela to talk about brain lab, radio telescopes for artistic experiments and ‘interstellar transmissions as a tool for philosophical enquiry.’

For the BIO 50 exhibition, the brain waves of the visitors are recorded thanks to a brain lab connected to a computer. Could you describe the setting and technology used? What does this brain lab look like?

During the opening day of BIO 50 I have been recording the brain waves of the visitors thanks to a NeuroSky mobile headset which transmits live EEG data to a computer via Bluetooth, up to 10 metres distance. The EEG data are then saved as video recording. The actual set up of the piece is created to minimize its visual impact in the gallery space,

I wanted the piece to be practically invisible: the visitors walking across the space, or simply sitting or standing while ‘thinking’ are the real presence of the piece. Because the technical aspect of the piece is relatively simple, anybody owning an EEG device can email me the recording of his or her brainwaves over the duration of BIO 50, to be transmitted into space as part of the live performance. The actual art piece is in the aether more than at the gallery. 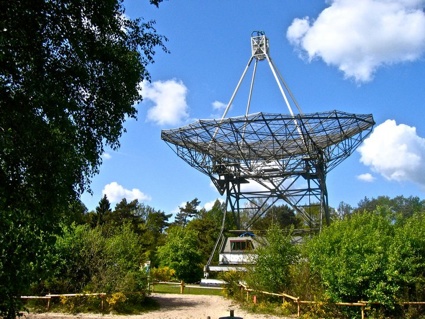 The piece I am presenting as part of BIO 50 is the first step of a long term project. This time I am using a simple yet relatively accurate device which detects EEG frequencies, ranging from Beta (representing the most intense state of alertness), Alpha (state of relaxed alertness), Theta (state of inward thought, visualization and dreaming) and Delta (state of dreamless dream). Interestingly, all these brain waves are always present and intertwined in the electroencephalogram, our mind seems to continuously shift from one state to another, as if fluctuating from dream to reality, from consciousness to subconsciousness, rather than being fixed in a particular mode, according to the set of our actions. As part of the project development however I am also planning to transmit into space brain waves recorded in specific conditions, such as during sleep and even perhaps of animals.

I read that the Dwingeloo Radio Observatory was no longer in operation in an official capacity. What is it used for now?

The radio telescope was rescued by radio amateurs in 2005: they brought it back to working order and it is now used for HAM radio activities and educational programmes. In 2009 I became the first artist in residence at Dwingeloo and since then I have been developing a series of projects based on radio transmissions, often web streamed live from the cabin of the radio telescope. Together with the radio amateurs, we are now developing an international residency programme and hopefully Dwingeloo will become an art hub in the near future. Not many radio telescopes can be used for artistic experiments, especially transmissions, so this instrument is really unique. After a year long restoration, the dish has been officially reopened in April 2014.

Michio Kaku: This is Your Brain on a Laser Beam

I was fascinated to read about Michio Kaku‘s suggestion that in the future we might be able to upload our consciousness into laser beams. Was it the main inspiration of your project?

I have been thinking about ‘Cogito’ for a couple of years already. In previous works I have been using radio waves to literally touch the surface of the Moon, receiving its reflected signals in form of visualized thoughts, in ‘Cogito’ I explore the possibility of travelling into space with the mind in greater depth. A few months ago Michio Kaku published an interesting book gathering the most futuristic theories in neuroscience, indeed we might be travelling into space by uploading our mind into laser beams in the far future. NASA is currently developing the technology for transmitting HD data into space by laser beam instead of radio waves, who knows how long it will take before we might be able to fully use our mind for experiencing space remotely.

How easy (or difficult) is it to convince neuroscientist, radio astronomers and philosophers to collaborate on your project? Cogito must be miles away from their everyday research and work…

Convincing the radio amateurs and radio astronomers I have been working with for the past five years was very easy. I made an official presentation of ‘Cogito’ at ASTRON, the Dutch research centre for radio astronomy, and realized that the idea of transmitting one’s thoughts into space resonates with some of the radio astronomers’ interest in SETI (Search for Extraterrestrial Intelligence). For the aspects of the project concerning neuroscience, I have been working with Prof. Ghebreab, his team and students at the University of Amsterdam. When we started collaborating last year, Prof Ghebreab was working on brain waves transmissions across the Internet, his interests seem to match my project and he appreciates the concept of ‘global brain’ emerging from ‘Cogito’. The philosophers are undoubtedly offering interesting insights and are directly involved in my conceptual research as the project touches upon the unsolved debate on dualism of mind and body. The research method I use as an artist however doesn’t always fit the philosophers’ analytical framework, causing some misunderstanding, at times.

I often find space so remote from my daily life that it almost become abstract. What is it in space that you find so fascinating? Why should we be more aware of its existence and the possibilities it offers?

I have always been interested in space, in all its forms. Before starting my work at the Dwingeloo radio telescope, I was busy with a research on harbour cities and their spatial and commercial networks across the globe. I guess I am interested in global perspectives.

Outer space is becoming increasingly relevant in our culture and economy. Our bodily limitations when it comes to direct contact with outer space raise questions on how can we perceive it, since we are part of it, yet denied its direct experience. This is one of the topics that fascinates me the most about outer space. For me transmitting brain waves into space is a form of physical space travel, with our mind converted into electromagnetic waves that travel in space at the speed of light. It is also a symbolic action for shifting our awareness from the Earth-centred perspective to the Cosmos-wide perspective and looking at ourselves from a far away point of view, understanding the relativeness of our position in the vastness of space.

Cogito is part of your PhD research. Could you explain us what the PhD focuses on?

‘Cogito’ is the departing point of my PhD artistic research at the Rietveld Academy in Amsterdam. Since starting my exploration on interstellar transmissions as a tool for philosophical enquiry, I have been questioning how to envision outer space by using thought as intellectual experience of the unseen. As part of my artistic research I am also interested in the role of philosophy in understanding the impact of outer space on our cognition. I am especially interested in mind bending theories which seem to stand in between Philosophy of the Mind and Physics (such as the ‘Orchestrated Objective Reduction’, conceived by Dr. Stuart Hameroff and Sir Roger Penrose) and which challenge our long standing knowledge on who we are in relation to the universe. Science keeps expanding our knowledge of outer space, yet direct cognition is restricted to our native planet and its close proximity. How can philosophy bridge the gap between scientific research in outer space and our earthy cognition? And how will our cognition change, should we be able to expand our mental and bodily capabilities in outer space, thanks to technology and a deeper understanding of our mind? 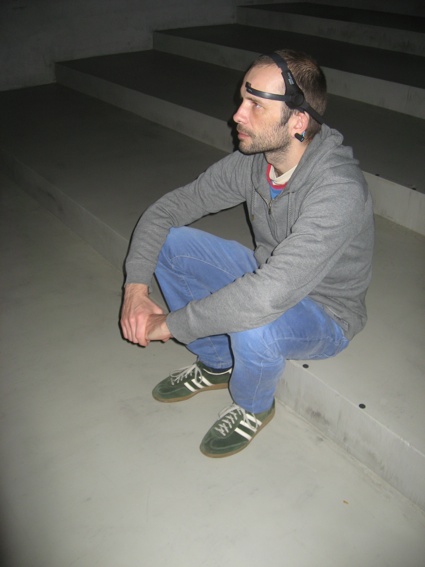 The installation in Ljubljana is the first part of the project. What’s next?

The ‘Cogito’ of the visitors recorded during the opening day in Ljubljana will be converted into radio waves and transmitted into space with a beacon transmission lasting a few hours, thus covering a large angle of the sky dome. The event will be streamed in real time as audio visual performance from the cabin of the Dwingeloo radio telescope. Date and time of the performance will be communicated on the BIO 50 social media and on my website.

It is expected that the project will be further developed in collaboration with the ‘Overview Institute’, a group of researchers engaged with the study of the ‘Overview Effect’ (the effect of seeing the Earth from outer space) on the cognitive state of astronauts who had the opportunity to witness the sight. A brain lab, a bit more sophisticated than the one used for BIO 50, will be permanently installed inside the cabin of the Dwingeloo radio telescope, and used by visitors who will be able to transmit their thoughts into outer space, while experiencing the immersive view of the Earth seen from space through a visual simulator.

All images courtesy of the artist.

Check out Cogito at BIO 50, the 24th Biennial of Design. The exhibitions remain open in various locations around Ljubljana until 7 December 2014.

Also part of BIO 50: Engine Block. Or how to turn a moped into a boat or a concrete mixer and Friction Atlas, a choreographed debate about public space, law and legibility.