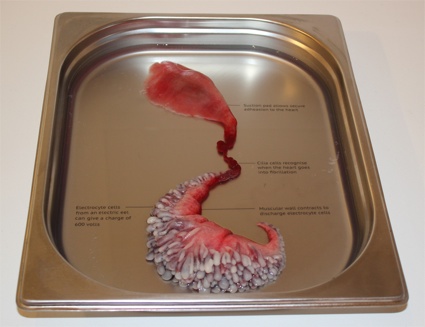 Electrostabilis Cardium – a defibrillating organ using parts from an electric eel that can discharge an electric current to the heart when it recognises it going into fibrillation (a heart attack.) Image courtesy Agatha Haines

I just realized that there is only a few days left to see the Degree Show of the Design Interactions department at the RCA so i’d better speed up and mention at least one projects i found interesting before the exhibition closes on Sunday.

Set in a medical context, Agatha Haines‘ project Circumventive Organs brings the whole “We are all cyborgs now” mantra into a new light. In the future, maybe the health and enhancement of human beings won’t be entrusted solely to artificial pace makers and other embedded electronics or robotic parts. Instead, our bodies might one day be fixed and improved with the help of hybrid organs that will be custom-designed, printed and inserted into the body to overcome a specific illness.

With the introduction of bioprinting the possibility of new organs is becoming a reality. The ability to replicate and print cells in complex structures could mean different cells with various functions could be put together in new ways to create new organs we would take millions of years to evolve naturally. Frankenstein-esque hybrid organs could then be put together using cells from different body parts or even different species.

The organs are using animal parts to respond to the risk of suffering from a stroke (Cerebrothrombal Dilutus), a heart attack (Electrostabilis Cardium) or cystic fibrosis (Tremomucosa Expulsum),

Electrostabilis Cardium being installed during surgery

I had a quick online chat with Agatha:

I’m curious about the shape these organs have: does the shape reflect their function? The exact space they can occupy in the human body? Why didn’t you make them look more appealing to the human eye?

Yes, I researched how these cells and tissues exist and look in humans and other species already and how they might look when they are joined to things they aren’t usually attached to. I then tried to design the shapes they are in based on the functions they have to perform. I also spent a long time testing colors that could give a sense of what the organ does. So I hoped the form might be slightly descriptive of the function. They are also lifesize to show how much space they may take up when inside the human body.

After looking at lots of viscera I felt people may believe in them more as objects if they look more disgusting like the weird and wonderful things designed by nature that already exist inside us.

Could you detail to me some of these organs?

Electrostabilis Cardium is an organ designed for people with heart problems and is designed to act like a defibrillator. It has a suction pad that attaches to the heart and then a tube, which has walls lines with cilia cells similar to that in the human ear. These cells can recognize vibrations, and if the heart goes into fibrillation (a heart attack) these cells will cause the muscular wall at the base of the organ to contract. Behind this muscular wall is a series of blobs which contain rows of electroplax cells, which are similar to those found in an electric organ of an electric eel. When the muscular wall contracts these cells discharge causing an electric shock to travel to the heart which then defibrillates it causing it to revert back to its normal beating pattern.

Tremomucosa Expulsum is an organ designed to help people who suffer from cycstic fibrosis. It is surgically attached to the trachea with holes that form walls between. The top of the organ has a similar muscular structure to that of a rattlesnake, which can vibrate vigorously without using much energy for long periods of time. This vibration causes any mucus on the trachea walls to become dislodged and to move down the tubes into the new organ, which then moves down into the bottom opening that is attached to the stomach. This allows the mucus to then be dispelled through the digestive system. 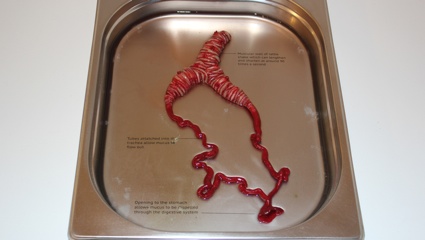 Tremomucosa Expulsum – an organ that uses rattlesnake muscles to release mucus from the respiratory system of a person who suffers from cystic fibrosis and dispel it through the stomach. Image courtesy Agatha Haines 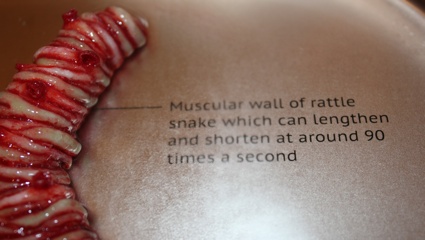 To me the project makes sense: having something organic rather than medical pacemakers that transform the human into a ‘cyborg’ seems to be more ‘natural.’ Yet, the organs would contain cells from leach, rattle snake or electric eel. Can these cells be made compatible to each other and of course to the human body?

There has been lots of research into using animal parts in our bodies and also a few noted existing procedures that have been successful.

Xenotransplantation (which is the transplantation of tissues or organs from one species to another) has become relatively famous with the possibility of transplanting a pig heart into a human. Yet there are problems with rejection, which are now being solved by genetically modifying the animal. This is a way of tricking the body to recognize these parts as human. So the possibility of altering the cells before they enter our bodies could mean they can be made compatible or at least our bodies may recognize them as compatible.

Cerebrothrombal Dilutus – an organ that contains cells from the saliva gland of a leech and releases an anticoagulant when it feels the pressure of a potential blood clot in the brain as a way of avoiding a stroke. Image courtesy Agatha Haines 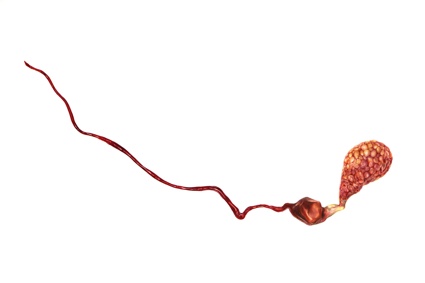 Does a human with these new, hybrid organ becomes a ‘new cyborg’ or something entirely different? Do you think it would be easier for someone to accept that these scary-looking new organs made with bits of animals will be part of their body instead of a clean, polished piece of electronics and metallic implants?

In a way the host may become like a ‘new cyborg’ as they are still being enhanced by a new technology, even if it is visceral rather than metallic. Another term often used for a human enhancement like this is ‘transhuman.’ Transhumanism is a movement that attempts to overcome the current limitations of the human body using emerging technologies.

Whether people are more likely to accept these organs is something that I am trying to question through doing the project. I have been interested in how people respond and relate to new body parts, whether it is a transplant or a prosthetic, and how sometimes it takes a while to accept this new part as initially it feels alien to the body. Yet I think if the organs are partly made from our own cells we may be more likely to accept them into our bodies. 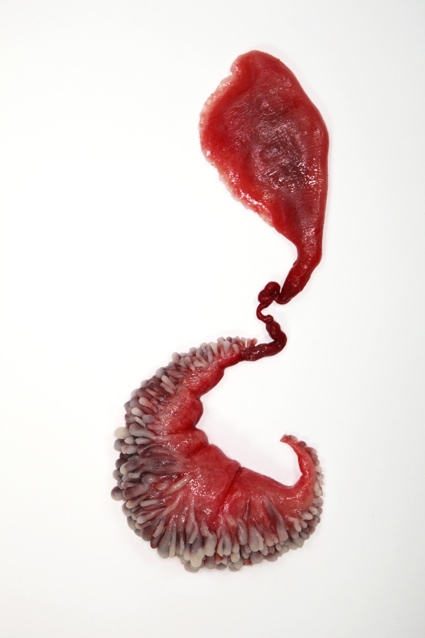 If you want to know more about Agatha’s work, you should check out Happy Famous Artists’ take on Agatha’s modifies babies or head to V2_ in Rotterdam on July 9, she will presenting her project at Test_Lab: The Graduation Edition.