American Zealots. Inside Right-Wing Domestic Terrorism, by Arie Perliger, professor and director of the graduate program in security studies at the School of Criminology and Justice Studies at the University of Massachusetts, Lowell. 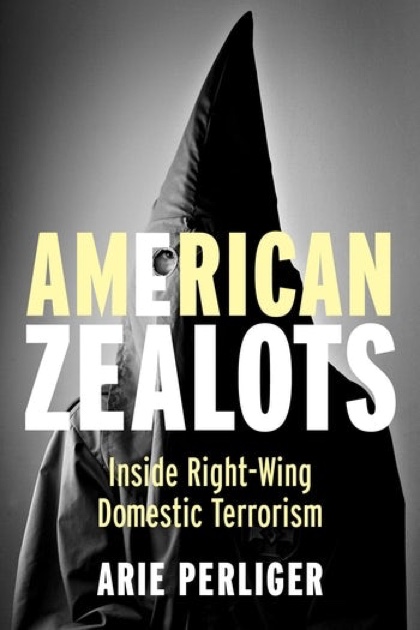 Publisher Columbia University Press writes: In American Zealots, Arie Perliger provides a wide-ranging and rigorously researched overview of right-wing domestic terrorism. He analyzes its historical roots, characteristics, tactics, rhetoric, and organization, assessing the current and future trajectory of the use of violence by the far right. Perliger draws on a comprehensive dataset of more than 5,000 attacks and their perpetrators from 1990 through 2017 in order to explore key trends in American right-wing terrorism. He describes the entire ideological spectrum of the American far right, including today’s white supremacists, antigovernment groups, and antiabortion fundamentalists, as well as the histories of the KKK, skinheads, and neo-Nazis. Based on these findings, Perliger suggests counterterrorism policies that can respond effectively to the far-right threat. A groundbreaking examination of violence spawned from right-wing ideologies, American Zealots is essential reading for everyone seeking to understand the transformation of domestic terrorism.

A year ago, FBI Director Christopher Wray announced that the agency had made about 100 domestic terrorism-related arrests since October 2018 and that the majority of them were tied to white supremacy. A look at recent headlines confirms that the level of far right terrorism has been rising steadily for the last 2 decades. And not just in the USA. But that’s a story for another book.

In his comprehensive and comparative study, Arie Perliger attempts to understand the societal and political factors behind the dramatic rise in far right violence, the new characteristics of its ideological framework as well as the type of strategies society should adopt to counter the growing threat.

The book is based on meticulous analysis of websites, social media platforms, personal accounts, paper and online publications promoting far right ideologies as well as on a dataset constructed by Perliger’s team to document all the violent attacks perpetrated by groups and individuals affiliated with the (very fragmented) American Far Right: the neo-Nazis, the Christian Identity followers, the members of the KKK, of Hammerskin Nation (HSN), of Aryan Nations, etc. The research also looks at paramilitary subcultures hostile towards the federal government and at pro-life organisations whose members are often also members of white supremacy groups. These groups have their own ideological nuances, structures, modus operandi, propaganda, targets, etc.

Their ideologies and rhetoric, however, increasingly overlap with the ones observed in the discourse of mainstream right-wing platforms and leaders. They tend to have similar positions on gun legislation and environmental policies, for example. In fact, Perliger argues, some of the concepts and practices that characterise far right groups are slowly seeping into formal mainstream political processes. He analyses the mechanisms behind this growing tolerance of far right ideas among the Republicans and how this, in turn, emboldens members of far right groups.

American Zealots makes for a fascinating, informative but also harrowing read. I can only admire its author for this in-depth investigation. I don’t think I would ever be able to spend months as he did poring over the abhorrent ideas and discourses professed by the kind of people who think their country needs an NAAWP, a National Association for the Advancement of White People.

The author also looked into a future characterised by the multiplication of environmental catastrophes, further democratisation of information sources, globalisation of political ideas and other dynamics that may provide new avenues of growth for far right ideologies. A pushback against the growing risk of an increase in far right violence lies, he argues, in a series of interventions such as a legal definition of domestic terrorism which would enable government agencies to address adequately groups perpetrating hate crimes, policies that facilitate better integration of minorities living in communities that have had little experience with ethnic and religious diversity, measures to slow the proliferation of White Power gangs in prison, solid tools to counter ideologies that promote hostility and violence towards segments of the population, etc. He would also invite leaders to consider the impact of their rhetoric on the legitimisation of far right narratives.

Even though the book focuses on the United States, it is difficult not to draw parallels with what is happening in Europe today. Not only are there transatlantic links between far right groups but some of the tactics adopted in the US to “recalibrate” their fetid ideological ideas and push them into the mainstream political discourse can also be observed in Europe. Far right Europeans too use civil rights jargon. They too attempt to dilute the ideological framework of their white nationalism with claims that they mostly care about environmental conservation, crime reduction, labour rights, etc. Or the fight against Covid-19.