Looking for innovative ways to supply agricultural fields with clean water, artist Rihards Vitols is currently experimenting with a new type of agronomy that relies on “cloud-farming”. In his scenario, farmers will raise thousands of helium balloons above their land to collect water from the cloud. Demonstration in the video below:

akA is part of the Transformative Ecologies exhibition which will open this week at the Maison du Design gallery in Mons, Belgium. The show features the result of the “techno-ecological” researches initiated by Latvian and Belgian artists who are exploring sustainable food and energy futures.

Right before the show opens, i caught up with Vitols to get more details about his first prototypes and experiments: 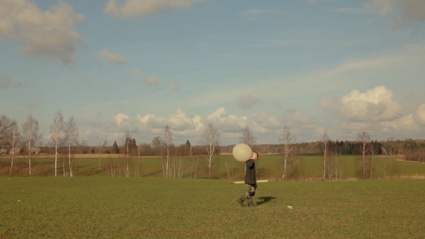 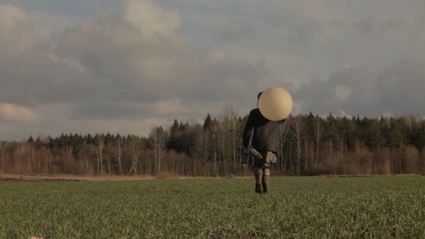 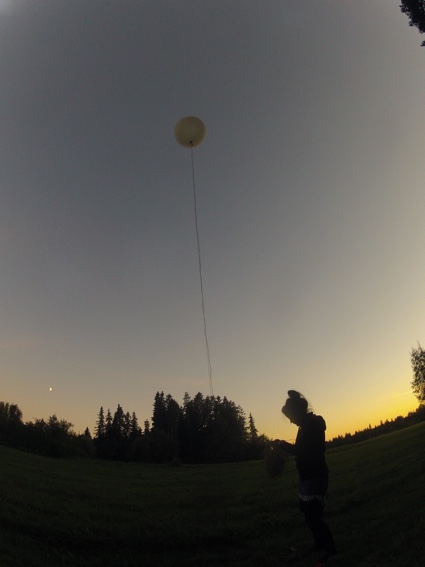 Launching the first balloon to collect data (with Eva Bukevica) 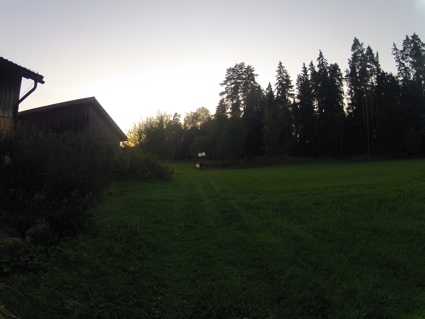 Hi Rihards! How did you get the idea for the project?

In the beginning the project was about clouds. I wanted to collect and archive data from clouds over my great-grandparents land, which I did using weather balloons and attaching humidity and temperature sensors to them. After a while I started to notice that balloons are slowly losing height. I took one of them down to check if there was a leak. But instead I noticed that small water drops are all over the balloon surface. Then the winter came and I had some time to think about how I could work with this process. During the Autumn a lot of people around me were talking about the future of water and then the idea about akA and Cloud Farming came into my head.

I was surprised at how low-tech the mechanism was. It looks so simple. But are there tricks and secrets to ensure that the system works as efficiently as possible? Or challenges you had to overcome while developing the project?

It is simple. But it is not fast. You need to wait while the water lands on the balloon and it can take some time. One of the challenges is the wind. If it’s windy it’s harder to get it up in the sky. Wind is just blowing it away diagonally. The second challenge is to launch multiple balloons in one field. I am still thinking about methods so that they would not get entangled with each other. Water collecting is still in progress and I am looking for the best solution. I used a sponge but obviously it`s not the best way, because some part of the water stays in it. At the moment those are all only ideas and i will be doing some further testing next spring. 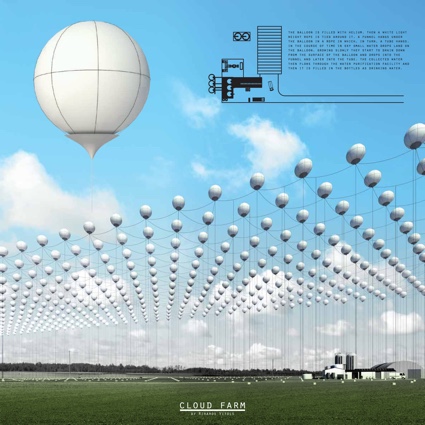 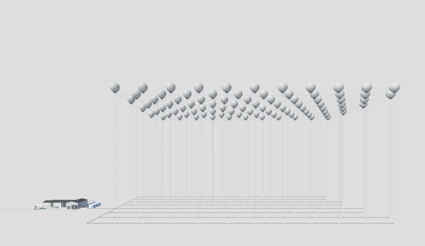 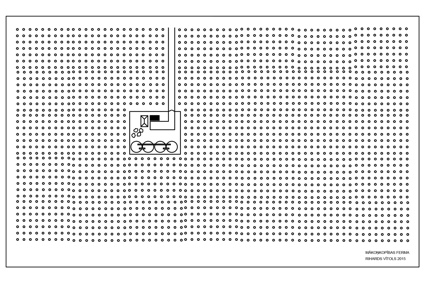 Could you walk us through the ideal scenario for akA? it would have to be implemented at large scale with thousands of balloons, right? But what is the process like on a large scale? Would the balloons have to be operative non-stop? Or just be deployed when there is a need for more water? How would a farmer use it exactly?

Farm size depends on the land size. But the ideal would be 1000+ balloons of 3 meters in diameter. All balloons would be lifted at once and connected in a network so they stay in place. Water gathering would need to be automated and at the moment I’m thinking about using a waterproof paper material to create a funnel which then would be attached to the balloon. I’m also considering using a lightweight tube from funnel to farm so that water can safely make its way to the purification station. A daily task of the farmer would be to check if all of the balloons are okay, also to fill the balloons with helium at least once every 2 weeks, fill bottles with water and send them out to shops or private buyers. I would like to automate it so far that all of the work takes only 2-4 days per month. One of best things is that the ground under the balloons can still be used for other things. 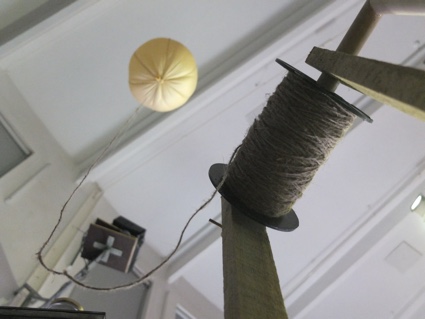 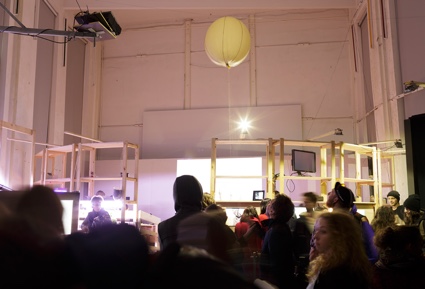 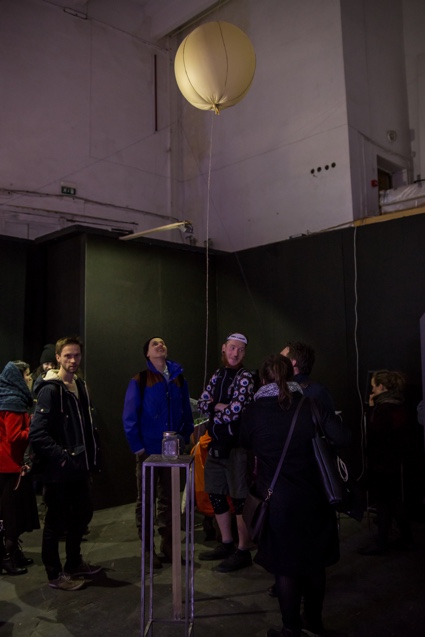 Is the water from the clouds really as pure as it should be? Aren’t clouds submitted to industrial pollution as well?

During the winter kids are eating snow – during the summer they are running around with their mouth open trying to catch the falling rain, at least in Latvia they do so. No one has gotten sick of it. Of course in a larger amount and in a bigger concentration it may not be so healthy. So all of the water needs to be checked before selling it further. 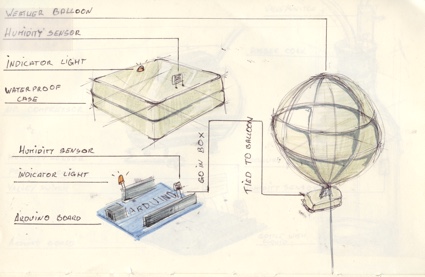 You have started to collect moist and temperature data about the sky over your land. Could you tell us what you found out?

Data collecting helped me to find the moistest place and time around the property. All data collection was before the water collection and at that moment there was no reason to find out something just to get data. Now I can use this data to show how fertile the sky over my property is for the potential cloud farmers who would like to rent my land for water collecting, if I would choose to stop collecting it by myself.

What’s next for the project?

Together with a designer Reinis Nalivaiko I`m building a webpage about the project. All information on the project will be available in the webpage, along with the data about the sky where the water and its analysis are being collected from. The concepts of the water collection systems will be also there along with the documentation from their appliance.

Next spring I want to get the cloud water tested and compare this data with tap water, rain water and borehole water. And then based on these data I would be able to find out what kind of purification system I need for the farm.

With a help of an architect Ivars Veinbergs that would allow me to make an architectural project and maybe in the next 2 years I will be able to create the first Cloud Farm.

Rihards Vitols holds a master’s degree in new media art from Liepaja University where he is now teaching. And in a few weeks the artist will start a second masters degree at KHM (Academy of Media Arts Cologne).

Check out akA at the Transformative Ecologies exhibition on 19 to 30 August at Maison du Design in Mons, Belgium. The show is curated by Rasa Smite and Raitis Smits from RIXC Center for New Media Culture and is accompanied by a 3D BioLab symposium on August 20th and 21st in Cafe Europa.